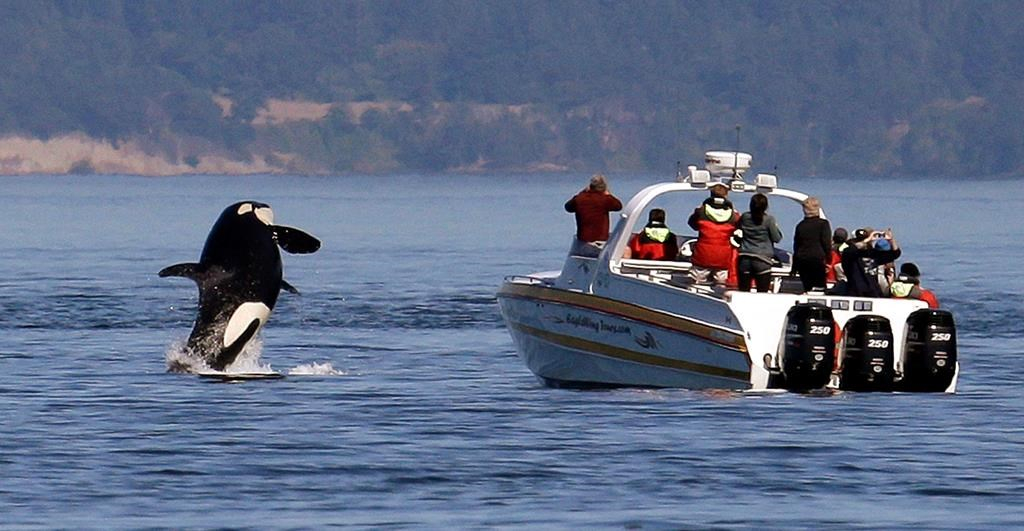 In this July 31, 2015 file photo, an orca leaps out of the water near a whale watching boat in the Salish Sea in the San Juan Islands, Wash. File photo by The Associated Press/Elaine Thompson
Previous story

Researchers are aiming to "teach" a computer to recognize the sounds of resident killer whales in order to develop a warning system for preventing ships from fatally striking endangered orcas off British Columbia's coast.

Steven Bergner, a computing science research associate at Simon Fraser University's Big Data Hub, said he is collecting and managing a database of sounds picked up 24 hours a day by a network of hydrophones in the Salish Sea.

Marine biologists will identify the sounds of different species of whales, including humpbacks and transients, and differentiate the acoustics from other noise such as waves and boats, he said. Machine learning or artificial intelligence would help detect the presence of orcas through patterns in the data.

"That (information) goes through another system that then decides whether there should be a warning that ultimately reaches the vessel pilots," Bergner said.

The goal is to detect whale calls automatically and send real-time alerts to ships to slow down or change course hours before orcas may be in their path and before boaters might observe them heading for trouble, he said.

Orcas along the West Coast are categorized into three families known as the J, K and L pods, each of which has its own dialect and calls that differ from the others.

Bergner is collaborating with colleagues from Dalhousie University in Halifax and at Carleton University in Ottawa to develop the machine-learning tools. Citizen scientists and the Orcasound project are also contributing research.

The project has received $568,000 in funding from Fisheries and Oceans Canada.

The program builds on work already underway by Ruth Joy, a statistical ecologist at Simon Fraser University's School of Environmental Science who is leading two orca projects expected to be completed by March 2022.

Joy said the hydrophone nodes located adjacent to shipping lanes in the Salish Sea would collect information to help predict the direction orcas are most likely to travel based on their typical patterns.

"This will give sort of a projection for up to three or four hours," she said of the advance warning to ship pilots to stay clear of the orcas.

"Even losing a single whale is really unconscionable. At this point, we've only got 74 of them left." she said. "Certainly we don't want the shipping lanes to become a place where killer whales are at risk."

It's hard to know how many orcas have been struck by vessels, Joy said, recounting the death of one of the cetaceans that washed up on the shores of the Sunshine Coast in 2017.

"The necropsy suggested it had died from blunt force trauma," she said. "We don't know what hit it, whether it was a high-speed recreational boat or a ferry or a commercial vessel or something else.

"You don't necessarily find them when they're hit, they just kind of disappear. With only a small fraction of them do you ever get the carcass to confirm what actually caused the death."

The project's findings will be shared with the research community to potentially save different populations of whales elsewhere, Joy said of the artificial intelligence tools being developed.

Her research led the Port of Vancouver's Enhancing Cetacean Habitat and Observation program to start an initiative in 2016 to reduce underwater noise in key feeding areas for southern resident killer whales.

Between June and October, tugboat operators have been asked to slow down once southern resident killer whales are confirmed to be present as part of a collaborative effort with the commercial shipping industry.

Joy said that while orcas typically head south for the winter, members of the J and K pods were spotted in the Salish Sea in B.C. earlier this month before they travelled to the Puget Sound area of Seattle.