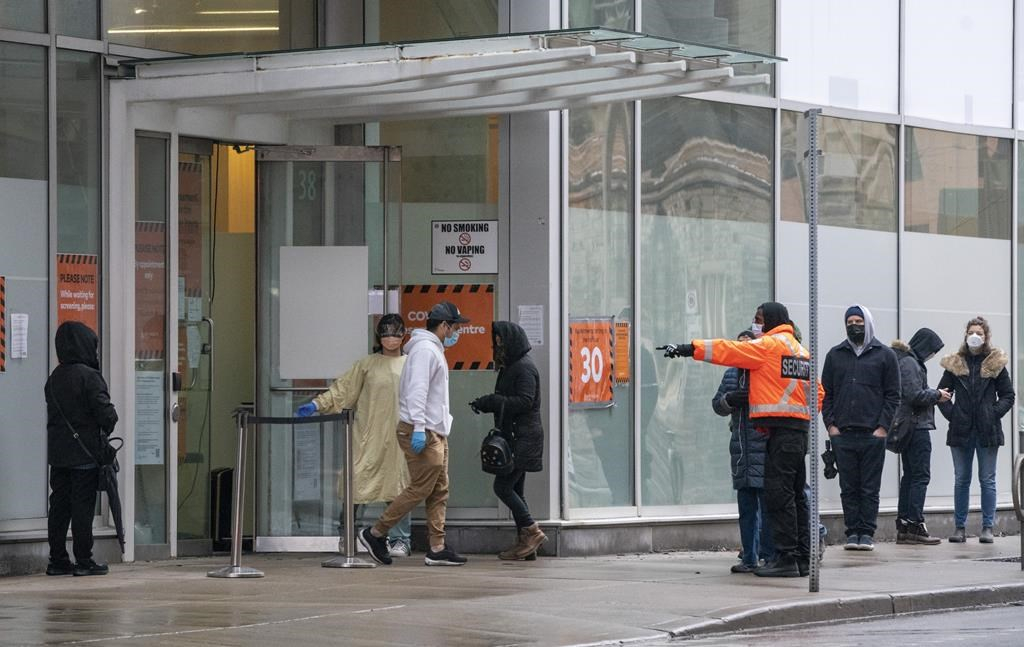 People are ushered in to a COVID19 testing centre at St. Michael's Hospital in Toronto on December 12, 2020. File photo by The Canadian Press/Frank Gunn
Previous story
Next story

The fraught, often frightening year of 2020 may be over, but experts warn the dawn of a new one doesn't leave behind the troubles caused by the second wave of the COVID-19 pandemic.

Patients in multiple Canadian hotspots are flooding hospitals at an alarming rate and expected to arrive in even greater numbers in the weeks to come, doctors and health centres said Friday.

“If these rates of increase continue the way they are, the months of January and February are absolutely going to be brutal. It’s just a question of how brutal will it be," said Anthony Dale, head of the Ontario Hospital Association.

One-fifth of the province's intensive care capacity is now devoted to COVID-19 patients, with Toronto and the regions of Peel, York, and Windsor-Essex hardest hit.

Dale said 45 of the 149 COVID-19 patients admitted into intensive care in Ontario last week have died.

“We will see accelerating numbers of unnecessary deaths — more people dying. We will see more people suffering in intensive care and in hospitals," he said, calling the situation "totally unsustainable."

The spike could jeopardize elective surgeries and other care. Some hospitals have already started to cancel procedures, adding to the backlog created after 160,000 were nixed in the first wave, he added.

He said the pandemic has prompted staff shortages at numerous hospitals, with some front-line workers redeployed to testing centres, labs and long-term care homes.

Hospitals in the greater Montreal area are on track to exceed capacity within the next three weeks, with almost two-thirds of beds designated for coronavirus patients already occupied, according to a report from INESSS, a government-funded health institute.

The fraught, often frightening year of 2020 may be over, but experts warn the dawn of a new one doesn't leave behind the troubles caused by the #SecondWave of the #COVID19 #pandemic.

"Unfortunately, if the trend continues, this will have to be compensated in particular by the additional shedding of non-COVID treatments in our hospitals," Quebec Health Minister Christian Dubé said Thursday in a Twitter post in French.

However, the projection did not take into account Premier François Legault's shutdown of all non-essential businesses in the province from Dec. 25 to Jan. 11., which could help curb the spread, said Dr. Luc Boileau, who heads the institute.

“The good news behind all of this is the vaccinations coming on," Boileau said. “The impact of this will be manifest on the outbreaks inside health services and of course lowering mortality.”

Nearly 500,000 doses of the Pfizer-BioNTech vaccine, which requires ultracold storage, have been distributed across the Canada since Health Canada approved it on Dec. 9.

The Moderna vaccine — green-lighted on Dec. 23 — has also started to roll off tarmacs, beginning to reach remote and First Nations communities over the past week. Its -20 C storage temperatures make for easier delivery compared to the -70 C needed for the Pfizer vaccine.

The country's not in the clear yet.

"We're still seeing knucklehead parties from seven to 14 to 25 people, raving out there with no masks, lots of booze and drinking and hugging and kissing and so on," Sly said. "That's avoidable."

On Friday evening, the federal NDP released a statement saying that MP Niki Ashton travelled to Greece to see an ill family member, and would consequently be relieved of her shadow cabinet roles, which include transportation.

"While we are sympathetic to Ms. Ashton's situation and understand her need to be with her family, millions of Canadians are following public health guidelines, even when it made it impossible for them to visit sick or aging relatives," the party said.

Surgeries typically ramp-up following a winter holiday lull, but more could now be sidelined due to the ripple effects of rule-flouting, said Dr. Zain Chagla, an infectious disease physician at St. Joseph's hospital in Hamilton and an associate professor at McMaster University.

"If there’s no beds to put those patients in afterwards, unfortunately those surgeries just get cancelled," he said.

St. Joseph's has opened a satellite site in a revamped hotel, transferring dozens of patients to the renovated facility in order to keep the main health centre's occupancy rate below 90 per cent to handle the expected surge.

“I have patients that didn’t have COVID but had horrible outcomes because ... they weren’t able to access care the way they should," he added, recalling the first wave.

"I’m very worried about those individuals again going into the next three to four months, that we’re going to see a fallout of people that have missed cancer diagnoses or infections that needed to be treated earlier.

“It’s a lot of strain on a system that is already strained,” he said.

Ontario reported 3,328 new cases and 56 more deaths linked to the virus, matching the highest death toll from the first wave. In Quebec, there were 2,819 new cases and 62 deaths.

The Public Health Agency of Canada said Thursday more than 720 patients hospitalized with the virus are now receiving treatment in ICUs, including 337 in Ontario and 165 in Quebec.