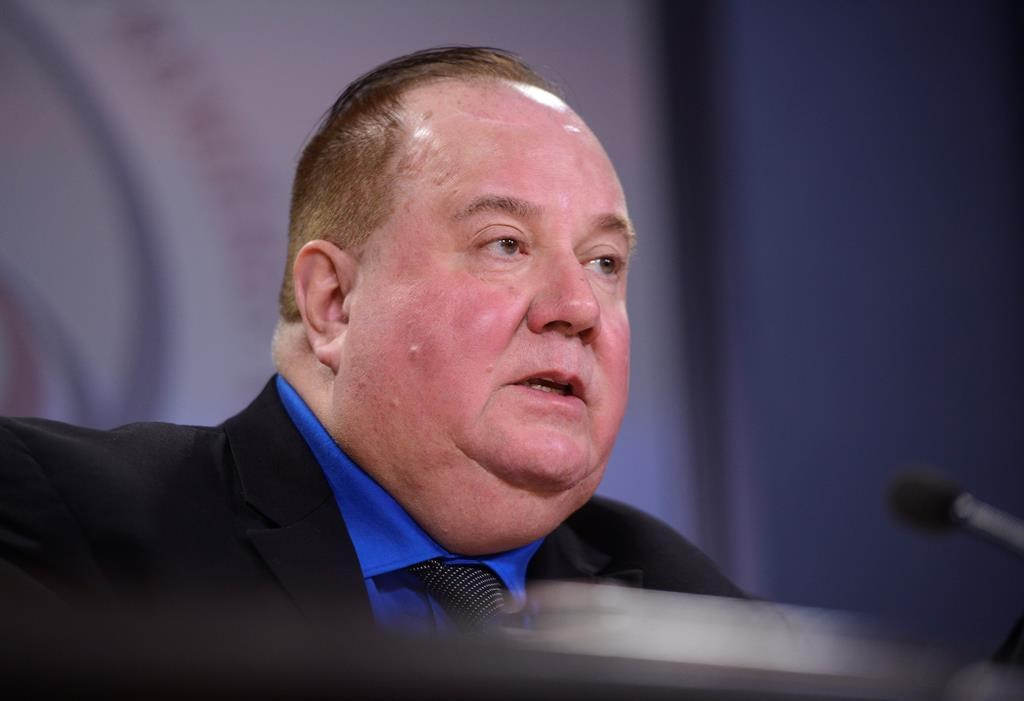 Mohawk Chief R. Donald Maracle during a press conference at the National Press Theatre in Ottawa on Tuesday, Feb. 18, 2020. File photo by The Canadian Press/Sean Kilpatrick
Previous story
Next story

The Mohawks of the Bay of Quinte First Nation is expanding its water system to deliver clean drinking water to hundreds of residents who have been grappling for more than a decade with seven drinking water advisories.

The Bay of Quinte is on Lake Ontario and the First Nation is not remote or isolated. It's just off Ontario's Highway 401, between Toronto and Montreal.

Chief R. Donald Maracle said his community has suffered from a lack of safe water since 2008, due to fecal, bacterial and algae contaminations. A regional drought made many groundwater wells go completely dry in 2017.

"We're making significant progress in terms of addressing our community's long-standing water needs," Maracle said in an interview with The Canadian Press.

He said the construction of eight-kilometre water pipes has started since his nation received $16.7 million from Ottawa for the project.

Prime Minister Justin Trudeau said in a year-end interview with The Canadian Press he realized only recently his government would not deliver on a promise to lift all long-term drinking-water advisories in First Nations communities by this March, adding that COVID-19 restrictions have blocked access to certain communities.

A total of 58 long-term drinking water advisories are still affecting 40 First Nations communities across the country, according to the government.

Maracle said the COVID-19 pandemic has also disrupted supply chains from manufacturers and made them unreliable for construction projects, which increased the cost of the water main project from about $8.1 million to $18.2 million.

"First Nations people have given up an awful lot of land and resources, which is the foundation of the economy of this country," he said. "The provinces and the federal government benefit from that, so why should First Nations not have safe drinking water and adequate housing?"

Maracle said 90 families are on a waiting list for affordable housing.

The #Mohawks of the Bay of Quinte First Nation is expanding its water system to deliver clean drinking water to hundreds of residents. #FirstNations #WaterAdvisories

"There's no other houses available in the surrounding area," he said.

Indigenous Services Canada announced the new funding for the project in December, saying the money will cover the cost of extending the water mains from both Deseronto, Ont., and the First Nation's own water-treatment plants to serve five areas in the Tyendinaga Mohawk Territory.

The department said the project's goal is to lift five long-term drinking water advisories by next autumn.

The new funding will enable the community to finish the third phase of a project started years ago. It began with a $26.7-million water-treatment plant and $13 million for an elevated water reservoir and water pipes last year.

He said Indigenous Services Canada only funds communal water systems. People living in two areas near the shoreline relied in the past on about 102 wells for their water needs.

Maracle said the water in the shore wells has been contaminated with a type of toxic algae for years.

"We believe it's directly related to climate change, because the blue-green algae blooms have become more persistent and worse in recent years," he said. "(People) cannot use their water for any purpose at all, for cooking for bathing. They can never use it for drinking."

He said 99 per cent of the wells in his community are under the direct influence of surface water.

He said about 57 per cent of the wells are polluted and about 70 per cent can go dry for months.

Maracle said a new design and funding will be needed to build new water lines and a holding tank near the shoreline to lift the last two drinking water advisories and that work will likely take years. He said funds to fix the small wells' drought and contamination problems will come from Infrastructure Canada.

He said the government has approved $30 million for his community to address the issue by 2026.

He said the algae contamination is a public health issue and the government of Ontario should pitch in to fix it.

"They could say what we believe: that every community should have safe drinking water (and) we're willing to help the First Nation," he said.

"I think both governments should be helping," he said "Let's face it, the land, Canada and Ontario are built on Indigenous territory, and the whole country has benefited from the land taken from Indigenous people. ... It's only right for both governments to work so we have safe drinking water."