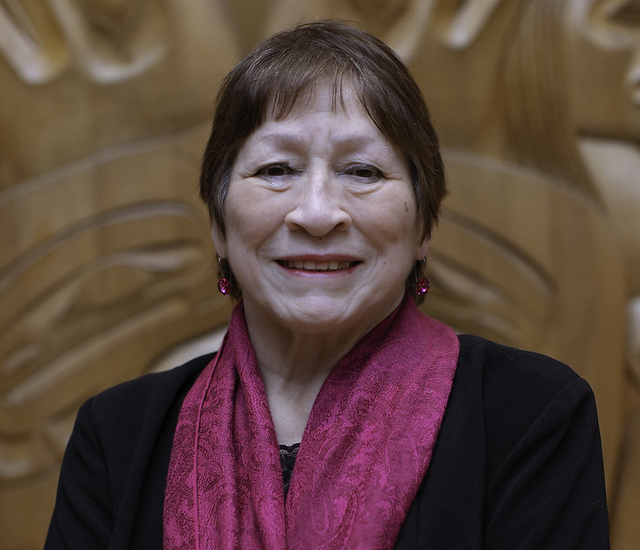 This is how Dene trailblazer Ethel Blondin-Andrew, the first Indigenous woman elected to the House of Commons and to serve in federal cabinet, described building Indigenous leadership and power during a 2019 United Nations panel on Indigenous women in politics.

Blondin-Andrew has kept her voice from the beginning. She delivered her first speech in Canada’s House of Commons in her Dene language. Through her 17 years as an MP, she brought issues of northern Indigenous sovereignty to Ottawa, fighting against infringement on self-governance, whether by the Meech Lake Accord or pulp mills along the Mackenzie River.

Now, conflicts involving Indigenous leadership and conservation — from Wet’suwet’en territory in British Columbia to Land Back Lane in southern Ontario to Mi’kma’ki on the east coast — are growing in scale and visibility. RCMP and local police continue to crack down on Indigenous land defenders and activists, while Alberta has moved to criminalize land defence and sovereignty protests. Where does this leave Indigenous-led conservation and self-determination?

Next Thursday, Jan. 21 at 7 p.m. ET/4 p.m. PT, Blondin-Andrew will join Linda Solomon Wood in the year’s first Conversations event, sponsored by the Indigenous Leadership Initiative and produced by the Canadian Centre for Journalism, to look at how Indigenous-led conservation and stewardship across the country are creating jobs, strengthening food security and inspiring youth. Register here to join the conversation. If you have questions for the host and guest, send them in advance to [email protected] for a chance to direct the discussion.

Blondin-Andrew brings to the Conversations event not just passion and lived experience but 32 years of self-determination and conservation work in Canada’s North. She began her career by teaching in three communities across the Northwest Territories before specializing in Indigenous language curriculum development. In 1989, one year after being elected to Parliament, she introduced a bill to establish a foundation to protect 53 Indigenous languages in Canada.

“With most of the Aboriginal languages, if they disappear in Canada, they do disappear from the face of the earth,” she said in a 1990 interview.

This Conversations event, open to the public, promises an engaging, in-depth look at the North and how Indigenous conservation is helping Canada meet its climate and biodiversity commitments. Join the conversation and support award-winning independent journalism by subscribing to Canada’s National Observer for as little as $6.99 per month.