'We will remember them': Canada commemorates COVID-19 victims on one-year anniversary of pandemic 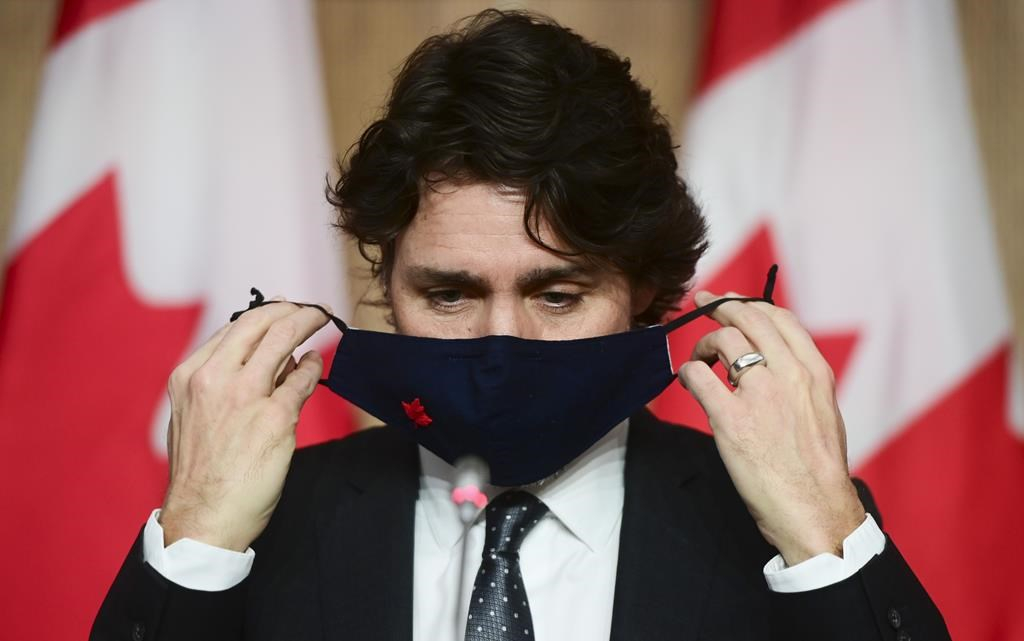 OTTAWA — Flags across the country were flown at half-mast and tributes poured in to lost loved ones on Thursday as Canada marked the one-year anniversary of COVID-19 being declared a global pandemic.

Prime Minister Justin Trudeau rose in the House of Commons Thursday and said March 11, 2020 will always be marked by a before and an after.

Since the pandemic began, 2.5 million people around the world have died due to COVID-19, with more than 22,000 of them in Canada.

"For families and close ones, each death has a before and an after," Trudeau said.

"Since the great wars of the 20th century, there is a sentence we often evoke, and it's a sentence that we can bring back for those that we lost this year during the pandemic: We will remember them."

Commemorations were held in different parts of the country including Quebec, which has accounted for nearly half the country's death toll with more than 10,500 dead.

Premier François Legault and other elected members carried white roses that were laid at the foot of a wreath during a ceremony in front of the provincial legislature.

In a brief speech, the premier noted that the pandemic has taken a disproportionate toll on the elderly.

"The virus hit very hard, and it above all hit our elders to whom we owe everything, our elders who built the Quebec of today," Legault said to a small crowd that included cabinet members, opposition party leaders, health-care workers and family members of those who died.

"We lost grandmothers, grandfathers, fathers, mothers, brothers, sisters friends, and today Quebec remembers these people that left us too soon."

Edmonton's mayor announced the city's flags would fly at half-mast, while Ontario Premier Doug Ford said he would seek consent from the legislature to observe a moment of silence recognizing all Ontarians who have been affected by the COVID-19 pandemic.

Since the pandemic began, 2.5 million people around the world have died due to #COVID19, with more than 22,000 of them in Canada.

In a statement, Ford described the pandemic as "one of the grimmest chapters in modern health history," but one that had also spawned "incredible acts of kindness, compassion and generosity" from front-line health-care workers, businesses, essential workers and volunteers.

Flags were also flown at half-mast in British Columbia, where Premier John Horgan paid tribute to the nearly 1,400 residents who lost their lives to COVID-19 and the efforts of British Columbians to fight the pandemic.

"Many people have faced loneliness. All of us have faced uncertainty," he wrote on Twitter. "But while our lives have changed, the resolve of British Columbians has not."

Trudeau chose to make Thursday a national day of remembrance because it was the one-year anniversary of the World Health Organization declaring COVID-19 a global pandemic.

The prime minister evoked the memories of Canadians being asked to stay home and stay safe, of essential workers stocking grocery store shelves and of people cheering health-care workers from their balconies.

"Businesses stepped up and produced (personal protective equipment)," Trudeau said. "Some went from making hockey masks to face shields: It doesn't get any more Canadian than that."

The prime minister briefly touched on the multiple tragedies in long-term care centres, where seniors across the country died in the thousands from the disease, often in circumstances of labour shortages and immense personal hardship.

"For every senior in Canada, we must do better, and I know that we will," he said.

Trudeau ended his speech on a hopeful note, telling Canadian that millions of doses of COVID-19 vaccine are on the way, allowing provinces to accelerate their vaccination campaigns. Health Canada has approved four COVID-19 vaccines so far, and 1.5 per cent of the population has been fully vaccinated.

Officials in Canada struck a reassuring tone on the Oxford-AstraZeneca vaccine on Thursday, after several European countries suspended its use after reports of blood clots following inoculations. At least nine countries fully or partially halted their rollouts of the vaccine pending further investigation, though none suggested there is a link between the clots and getting the vaccine.

Both Quebec and Alberta's top public health officials issued statements on Thursday saying there is currently nothing to indicate the vaccine is unsafe, while promising to monitor the situation carefully.

Ontario announced it was placing, Sudbury, Ont., into lockdown as of Friday to curb the spread of more contagious COVID-19 variants and protect health system capacity after a spike in cases.

The province's science advisers released new modelling that concluded the province's ability to control the spread of COVID-19 variants over the next few weeks will determine if there will be a third wave of infection.

The province's Science Advisory Table said that while the drive to vaccinate residents and workers in long-term care has paid off in declining deaths and illness, progress against the virus has stalled outside that sector. It said Ontarians will have to be strict about masking and physical distancing to prevent a new surge linked to variants.

The news was better in British Columbia, where rules were relaxed to allow outdoor gatherings of up to 10 people.

Dr. Bonnie Henry, the province's chief public health officer, said while the infection curve of the pandemic is trending down on Vancouver Island and in the Interior and Northern health regions, COVID-19 is still circulating in communities, particularly in the Lower Mainland.

Canada's chief public health officer said in a statement that daily COVID-19 case counts have levelled off after declining nationally from mid-January through mid-February.

Severe outcomes have continued to decline, Dr. Theresa Tam said, with an average of 2,064 people with COVID-19 treated in Canadian hospitals each day in the past week.