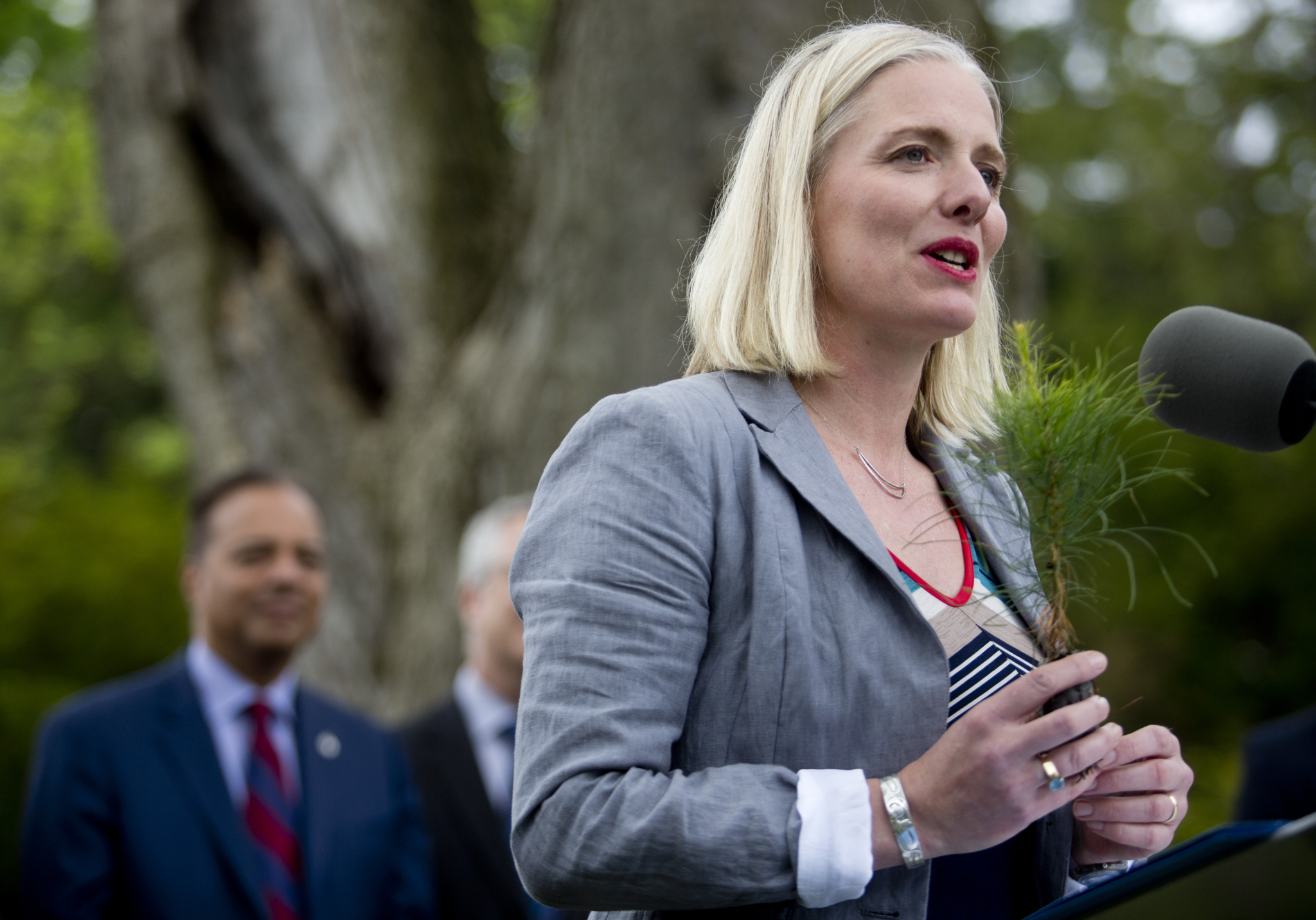 Infrastructure Minister Catherine McKenna will not be seeking re-election, but pledges to keep fighting against climate change as a private citizen. File photo by Andrew Meade
Previous story
Next story

After six years of pushing for climate action at the federal level, Infrastructure Minister Catherine McKenna will be focusing her future efforts not on running for re-election, but on helping to tackle climate change as a citizen.

McKenna announced Monday that her decision to step back was motivated not by the sexist attacks she has received during her time in office, but by a desire to spend time with her children and continue the fight against climate change.

“I will be 100 per cent focused on climate change,” she said. “There's many ways to serve. And I will continue serving, just in a different way.”

Over the summer, McKenna said she will think about how she can contribute to the climate fight as a mom and as a private citizen.

McKenna plans to continue her role for as long as needed and said she offered to assist Prime Minister Justin Trudeau at COP26 meetings in Glasgow, Scotland, this fall, but did not elaborate on what her role might be.

“That's really up to the prime minister and (Environment and Climate Change) Minister (Jonathan) Wilkinson,” she said.

Although ample criticism for Liberal climate policy exists across the political spectrum, Catherine Abreu, executive director of Climate Action Network Canada, said McKenna has done some really good work on climate change and is excited to see what she does next.

“This was the first environment minister who started doing the really, really hard stuff on climate in Canada, which is going to be really challenging for anyone,” said Abreu.

“I think she has a lot to be proud of, and played a really huge role in changing the game when it comes to Canada's action on climate change.”

Within her first hours as environment and climate change minister in 2015, McKenna helped negotiate the Paris Agreement and land the improved 1.5 C pledge.

[email protected] is leaving politics, but remains committed to fighting climate change. "She has a lot to be to be proud of, and played a really huge role in changing the game when it comes to Canada's action on climate change," said @catabreu_

McKenna also brought national carbon pricing to Canada, something Abreu said was made difficult by the constitutional challenges brought by Saskatchewan, Ontario, and Alberta.

“It didn’t happen perfectly,” Abreu said. Climate Action Network would have liked to see national carbon pricing happen sooner and start at a higher price, but with the confirmation that it will rise to $170 per tonne in 2030, Abreu said, “we’ve landed in a workable position.”

McKenna hasn’t been perfect, Abreu notes. She has advocated for fossil fuel infrastructure like the Trans Mountain pipeline expansion project and the Pacific NorthWest LNG project.

But Abreu said the disconnect between prioritizing the climate crisis and supporting fossil fuel infrastructure is not specific to any one government or politician.

“I don't think it’s necessarily because of her as a person, but because of the nature of this government's stance,” she said.

In the 2015 election, every political party promised to build fossil fuel infrastructure, including the Green Party of Canada, which proposed creating new jobs in Canada’s oil and gas sector by refining the product domestically.

“It is an endemic problem to the Canadian federal government that we are going to have to sort out if we're going to be able to get the job done on climate change,” said Abreu.

Abreu said the infrastructure assessment is a big deal and could be consequential for Canada.

She also described McKenna as a “strong, committed public politician who was active in the fight against climate change” and whose visibility as environment minister and commitment to fighting climate change exposed her to vitriolic personal attacks.

“I do think that her relentlessness, and her commitment to the cause meant that some very, very challenging, unprecedented things when it comes to Canada's action on climate change happened,” Abreu said.

Annamie Paul, leader of the federal Green Party, commended McKenna for serving as a member of Parliament despite being “subjected to much more vitriol than most politicians.”

McKenna has faced misogynistic attacks both in-person and online — in 2019, someone spray-painted a misogynistic slur on her Ottawa Centre campaign office, and her Twitter account has been inundated with similar messages.

“I just hope that for the next woman, or the next politician in general, (who) chooses to stand up and put their name forward to be elected and serve in that role that it is easier, that it is more respectful, and that the culture of politics can change to make sure that we don't lose out on the talent of people who might consider running,” said Paul.

At her announcement, McKenna said the hate and attacks she received were outweighed by millions of people supporting her and stressed that her decision should not deter other women from going into politics.

“To the girls out there — go run like a girl. Do it on your own terms… And I honestly will be cheering and supporting you all the way.”

She said she wants girls, Indigenous people, Black Canadians, new immigrants and members of the LGBTQ2S+ community to feel safe in politics.

“We need more diversity in politics, it's the only way it is going to change,” she said. “If you feel it in your heart, if you've got something to contribute, something you want to achieve, then get into politics. We need new voices.”

Trudeau & Co. are following Big Oil's playbook: delay, delay, delay. Increase fossil fuel production. Expand markets. Ramp up fossil-fuel subsidies. Funnel public money to fossil fuel companies. Extract as much revenue from sunk costs as possible. Grossly under-report oil & gas emissions. Use creative accounting to wipe emissions from the balance sheet. Set aspirational net-zero targets decades out into the future (2050) with no plan to meet them. No plausible roadmap to emissions targets. No numbers.
Under climate leader Trudeau, Canada's GHG emissions in 2018 hit levels not seen in a decade."Canada’s emissions have actually climbed slightly every year the Liberals have been in power, from 707 Mt in 2016 to 716 Mt in 2017, 728 Mt in 2018 and 730 Mt in 2019."
*
On Jun. 17, 2019, the Liberal Govt declared a climate emergency.
On Jun. 18, 2019 — the next day — the same Liberal Govt approved the TMX pipeline expansion project.
A pipeline vigorously promoted by Ms. McKenna:
"McKenna hasn’t been perfect, Abreu notes. She has advocated for fossil fuel infrastructure like the Trans Mountain pipeline expansion project and the Pacific NorthWest LNG project."
Strange world where Environment Ministers promote pipelines. If McKenna did not support her government's policies, she should have resigned.
Let future generations judge.

Agreed. Maybe she can feel

Agreed. Maybe she can feel proud that she did more than the Conservatives did, but clearly not enough given the size of the problem. The least she and her government could have done is ensure that Canada did its part in the global struggle to limit emissions. But no, we lag behind pretty much every Western country in addressing climate change.

McKenna has been on the wrong side of the "climate fight" for the last six years. Promoting new pipelines and LNG projects.
She says transitions take a long time... so let's expand fossil fuel production and markets in the meantime.
She tells us people are still using oil and gas... so let's double down on fossil fuels. Pour billions of dollars into carbon capture and SMRs. The shift to renewables will have to wait.
She insists that her Liberal government is committed to its targets... when every credible analysis reports we are not on track. With no hope of hitting our targets as oilsands production grows.

Michael Harris: "… Although Trudeau and Environment Minister Catherine McKenna continue to say all the right things on the environment, their rhetoric is emptier than a limp balloon."
www.ipolitics.ca/2017/11/23/singhs-primary-political-problem-isnt-trudea...

My neighbours and I are broiling under 410 ppm CO2. More brutal heatwaves and wildfires ahead. McKenna typifies the climate leadership that brought us to this point and will make our lives worse.
With climate leaders like these, we don't need enemies.

It seems she might have an odd sense of proportion. She was Minister of the Environment and Climate Change, for what? Four years? And apparently thinks she can accomplish more as a "private citizen."
"Continuing" to fight climate change in that context is a bit of a false description of activities of the past half dozen years ...
It's a strange sense of relative powers to think she can accomplish more as a "private citizen" than as the cabinet minister with the portfolio, in a majority government.

I do find it odd that she

I do find it odd that she says she's "staying" in the climate fight, since normally you have to be somewhere in the first place in order to "stay". On the other hand, I'm perfectly willing to believe she is capable of doing more for the climate in a private capacity than she did as a cabinet minister. Maybe she'll do an efficiency reno on her home, for instance.