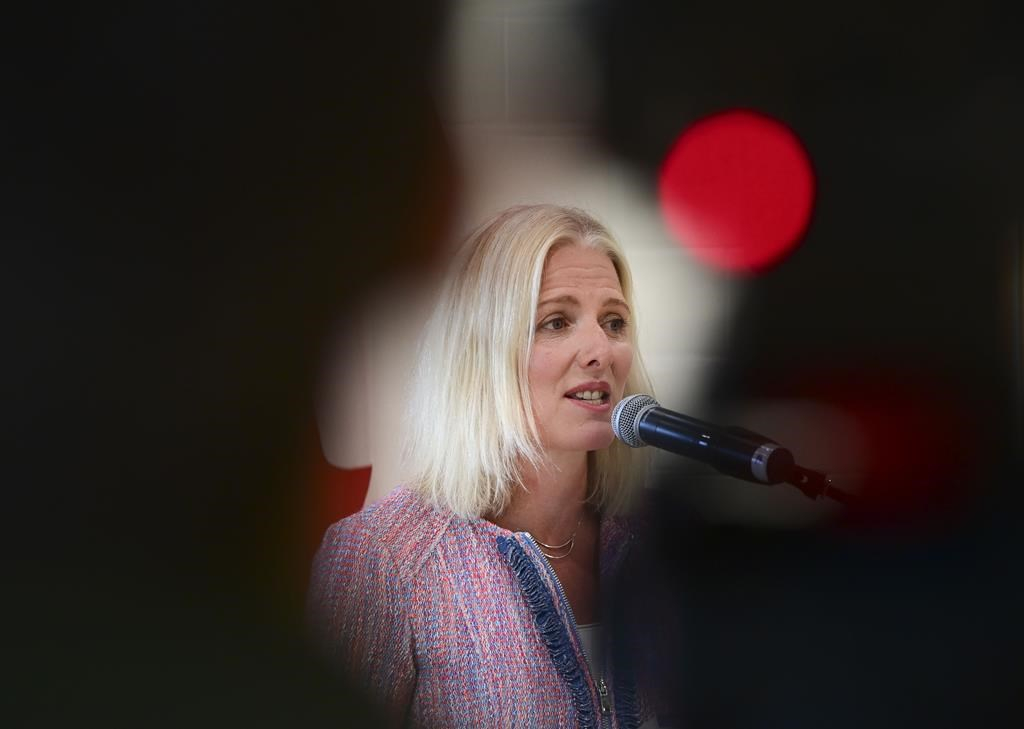 Minister of Infrastructure and Communities Catherine McKenna speaks during an event at the Tomlinson Family Foundation Clubhouse in Ottawa on August 5, 2020. File photo by The Canadian Press/Sean Kilpatrick
Previous story
Next story

Infrastructure Minister Catherine McKenna has decided not to seek re-election.

Her surprise decision opens up some prime political real estate that could become a launching pad for former Bank of Canada governor Mark Carney should he decide to run for the Liberals in the next election.

McKenna has held Ottawa Centre, a riding that encompasses Parliament Hill, since 2015, when she wrestled it away from the New Democrats.

Carney has not committed to running but promised in April, during his political debut at the Liberal party's virtual convention, to do whatever he can to support the party.

McKenna is to hold a news conference Monday to announce her decision to stand down in the next election, but an advance copy of her remarks was obtained Sunday by The Canadian Press.

She says she wants to spend more time with her three children and devote her professional energies to the fight against climate change.

"Like many Canadians, living through COVID-19 over a very long year made me step back and reflect on what matters to me most. And it's two things: my kids and climate change."

McKenna informed Prime Minister Justin Trudeau of her decision on Sunday. She has offered to continue serving as infrastructure minister until an election is called.

All parties profess not to want to head to the polls during the pandemic, but all are feverishly gearing up for one as Trudeau increasingly seems to be setting the stage for pulling the plug on his minority government this summer.

As Trudeau's environment minister during his first mandate, McKenna stick-handled the introduction of the Liberal government's national climate change action plan, which included imposing a price on carbon emissions.

The carbon price — or "tax" as it is called by the Conservatives — was bitterly opposed by provincial governments in Ontario, Alberta and Saskatchewan, who challenged its constitutionality in court. The Supreme Court ruled in March that it is constitutional.

McKenna became a lightning rod for opposition to the climate plan, enduring misogynistic slurs and threats on social media and in graffiti scrawled on her constituency office. Police were called in to investigate last summer after someone yelled obscenities at one of McKenna's staffers, video of which was posted to social media.

In the text of her remarks for Monday's announcement, McKenna specifically addresses young girls who are thinking about whether politics is for them.

"Do it. And when you do it, don't be afraid to run like a girl. I'll be there cheering you on," she says.

"Get into politics to do something, never to be something. There's a lot to dislike about this business but you can make a bigger difference in the lives of more people than you can anywhere else."

Trudeau moved McKenna to the infrastructure post following the 2019 election. The move, among other things, put her in charge of funding green projects aimed at helping Canada meet its emission reduction targets.

But it seems McKenna has missed being at the heart of the climate change fight.

"This is a critical year for climate action in the most important decade that will decide whether we can save the only planet we have," she says in explaining her decision not to seek re-election.

"I want to spend my working hours helping to make sure that we do."

Carney could not be immediately reached for comment Sunday. His name has been bandied about as a potential Liberal leader for at least 10 years.

While he was still Bank of Canada governor in 2012, Carney quietly flirted with the idea of a leadership run, courted by Liberals desperately searching for a new saviour after the 2011 election flame-out.

But amid criticism that even the smallest whiff of partisanship was undermining the independence crucial to a central banker, Carney eventually squelched the speculation by saying he'd just as soon become a "circus clown." He left Canada shortly thereafter to take over the helm of the Bank of England.

He returned to Canada last summer and earlier this year released a book promoting his vision for a new kind of capitalism that combines the pursuit of profit with social purpose. He is currently the United Nations special envoy on climate action and finance.

At the Liberal convention in April, Carney finally openly declared his partisan allegiance but kept Liberals guessing about whether he'd actually run for elected office.

"To me, humility means recognizing the great good fortune that I've had growing up and the responsibility of service that comes with that," he told the convention.

"And that's why I'll do whatever I can to support the Liberal party in our efforts to build a better future for Canadians."

Must be difficult to parrot

Must be difficult to parrot hollow Liberal talking points on climate and energy day after day — and then have to look your children in the eye when you come home.
Hard to be a part of a government that greenlights new pipelines, LNG projects, and white elephants like carbon capture — and believe that you are working for your children's future. How do politicians not blush with shame?
While I wish Catherine McKenna well, her parting words ring as hollow as her climate rhetoric over the last six years.
McKenna: "When I got into politics now eight years ago, I made two simple promises to myself: always fight for what I believe in and leave when I had done what I got into politics to do."
What exactly did she do?
The Liberals' climate plan was dictated by corporate Canada and the oil industry. Not surprisingly, the Liberals plan to fail on climate. McKenna could have said no at any time. Ever the good soldier, she enabled Canada's failure.
*
McKenna: "This is a critical year for climate action in the most important decade that will decide whether we can save the only planet we have. I want to spend my working hours helping to make sure that we do."
A virtual admission that even as a government Minister seated at the cabinet table she has little power to promote "effective climate action". The real power is in the PMO — Corporate Canada's front office.
*
1) "Get into politics to do something, never to be something. There's a lot to dislike about this business, but you can make a bigger difference in the lives of more people than you can anywhere else."
2) "McKenna also said she wants to focus her energies on fighting climate change from outside of government."
Obvious contradiction. If McKenna had any hope of making a difference on climate inside government, she would not be leaving.

McKenna: "The reality is this

McKenna: "The reality is this is a transition that is going to take decades."
McKenna: "We are in a transition. So transitions don't happen overnight."
The transition will take precisely as long as we choose. The Liberals choose to make the transition over decades we don't have.
Transitions start by moving in the direction you wish to travel. Doubling down on fossil fuels (oilsands expansion, new pipelines, LNG plants) takes us in the wrong direction. New fossil fuel projects lock us into a fossil-fuel future for decades. AB's emissions show no sign of falling. Canada has no hope of meeting its 2030 and 2050 targets.
The science says we have to halt emissions by mid-century. We need to start winding down the fossil fuel industry now, not in 2049.
If McKenna truly believed the science, she should have done the honorable thing and resigned. Instead, she signed off on fossil fuel expansion — and defended the indefensible.
If even our Environment Minister bets on climate failure, what hope do we have?
*
McKenna: "But the reality is people are still using oil and gas. We haven't gotten to the point that there isn't this demand for it."
Which doesn't mean we should double down on fossil fuels and expand production. Logic fail.
Doubling down on fossil fuels in the face of climate change is insanity. It's like smoking two packs a day instead of one to cure cancer.
*
"McKenna told the Canadian Press in March of this year, 'We're absolutely committed to meeting our target.'
"That is simply no longer a credible statement."
"Trudeau's Big Oil-friendly decisions mean climate chaos"
https://rabble.ca/blogs/bloggers/brent-patterson/2018/10/trudeaus-big-oi...
*
"McKenna’s bafflegab fails to counter that GHG targets keep being missed"
https://ipolitics.ca/2018/03/06/mckennas-bafflegab-fails-counter-ghg-tar...
*
Michael Harris: "… Although Trudeau and Environment Minister Catherine McKenna continue to say all the right things on the environment, their rhetoric is emptier than a limp balloon."
www.ipolitics.ca/2017/11/23/singhs-primary-political-problem-isnt-trudea...