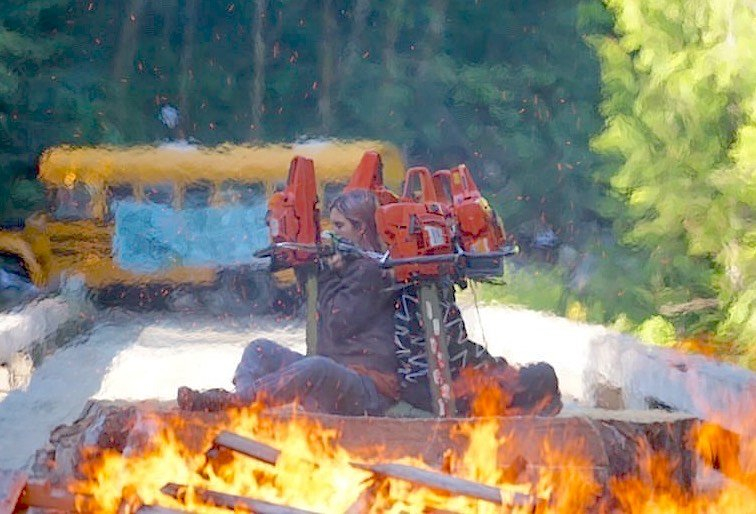 A group of news organizations, including Canada's National Observer, presented initial arguments to a B.C. judge Wednesday morning in a push for greater media access to a remote protest site on Vancouver Island.

The coalition’s lawyer is asking for a clause to be inserted in the current standing injunction, which was granted to the RCMP by the B.C. Supreme Court on April 1, barring the RCMP from interfering with media access at Fairy Creek. The area, around Port Renfrew, B.C., is home to blockades set up to oppose old-growth logging that have been in place since August 2020, in the traditional territory of the Ditidaht and Pacheedaht First Nations.

The federal government has opposed the request, writing in a response to the legal application dated June 25 that “where enforcement operations require secrecy to be successful, media invitations are not sent.”

For Ethan Cox, editor and co-founder of Ricochet Media, one of the news organizations involved in the legal filing, the sense of deja-vu is “overwhelming.” In 2020, Cox says the RCMP detained and blocked journalist access during RCMP raids on Wet’suwet’en camps in northern B.C in a way reminiscent of how journalists are being treated today.

“But when these errors are a mirror image of the errors they made last year at Wet’suwet’en, are they really errors?” said Cox during a July 14 press conference.

“Or are they an intentional strategy to frustrate and thwart media access?”

The coalition filing the legal application to the B.C. Superior Court includes Canada's National Observer, the Canadian Association of Journalists (CAJ), The Discourse, IndigiNews, Ricochet Media, Capital Daily Victoria, The Narwhal, APTN and Canadian Journalists for Free Expression. The application was filed in B.C. Superior Court in May, requesting the RCMP allow fair access to media bodies covering the action at Fairy Creek.

A timeline released by the CAJ shows continued interference by the RCMP with media attempting to cover the story, calling the sequence of events an “error-filled process in which journalists are chaperoned at all times, routinely detained at roadblocks and prevented from witnessing arrests the RCMP deem secret, as well as those that take place while the RCMP chaperone is unavailable.”

The group wrote a letter, via its lawyer, to the RCMP on June 2 outlining the issues and asking for discussion and compromises related to media access. The following day, the RCMP responded by saying it couldn’t improve on media access because it was already “addressing media needs."

Brent Jolly, CAJ president, says the RCMP’s justification for media access is largely that it’s concerned about journalist’s safety, as well as non-journalists pretending to be part of the media.

A coalition of news organizations, including Canada's National Observer, made initial arguments to a B.C. judge Wednesday to bar RCMP from interfering with media access at #FairyCreek. #PressFreedom

Jolly sees the RCMP’s claims around safety as a facade.

“I mean, journalists go into war zones. They go into other conflict areas. You know, professional journalists know what their standing is in these kinds of places, and we don't really need the RCMP to hold our hands in this case.”

Jolly said the coalition doesn’t know exactly when the case results will be in, but he expects it will be in “short order.”

Canada's National Observer CEO and editor-in-chief Linda Solomon Wood said this case and its topic is especially pertinent — as the climate crisis continues to escalate, the media needs to be able to adequately cover how it's affecting our communities and local environments.

"Canada's official government statement is that it believes ‘freedom of expression is at the core of human individuality and is one of the essential foundations of a safe and prosperous society.’ If this is to be more than a belief, this principle must imbue how government officials conduct themselves at every level, including on the ground as RCMP interact with journalists who are attempting to cover stories of interest to the public,” she said.

“Transparency, openness and inclusion are so key to journalists getting the story back to Canadians who depend upon them to do so.”

There is no real equation

There is no real equation between the blockade at Unis’ot’en Camp in Wet’suwet’en territory and the Fairy Creek protest. For one thing, the Pacheedaht First Nation in whose unceded territory Fairy Creek exists have asked the protesters to leave and, at the same time, logging activity has been postponed—not least because of the usual summer shutdown due to wildfire risk.

Nobody but fire look-outs and, in the event of fire, firefighters, should be in the woods right now. Protesters are effectively increasing the risk of wildfire in the area—not least because of the additional personnel required to meet a court order to remove them. Allowing news media access would, obviously, further increase that risk.

None of these factors was an issue at Unis’ot’en Camp and, as such, what happened there is irrelevant to the Fairy Creek situation. And especially the wildfire risk situation—which was also not an issue during the Wet’suwet’en blockade.

In Fairy Creek’s case, the judge should reject news media’s application—at least for as long as the official fire shutdown is in effect (which looks like it will last for the next several weeks, at very least).

The fire thing is a fiery red

The fire thing is a fiery red herring. If we deem that journalists can be stopped from going to certain places because of fire regulations, so be it. But that's a separate issue to whether the RCMP can just stop the journalists from going places because, basically, they don't want the journalists to report the news. If the cops want to block reporters on the basis of fire safety, they can argue that separately, but they shouldn't be allowed to have injunctions that let them keep journalists out at their whim.

The distinctions about who's right and who's wrong and who's being arrested that you mention are also irrelevant. The media ideally should REPORT on those distinctions. The point is, it is news, it is of public interest, and so reporters should be able to go find out about it and report on it. The cops' desire to do whatever dirty work they want without anyone watching is not a legal principle in this country as far as I am aware.