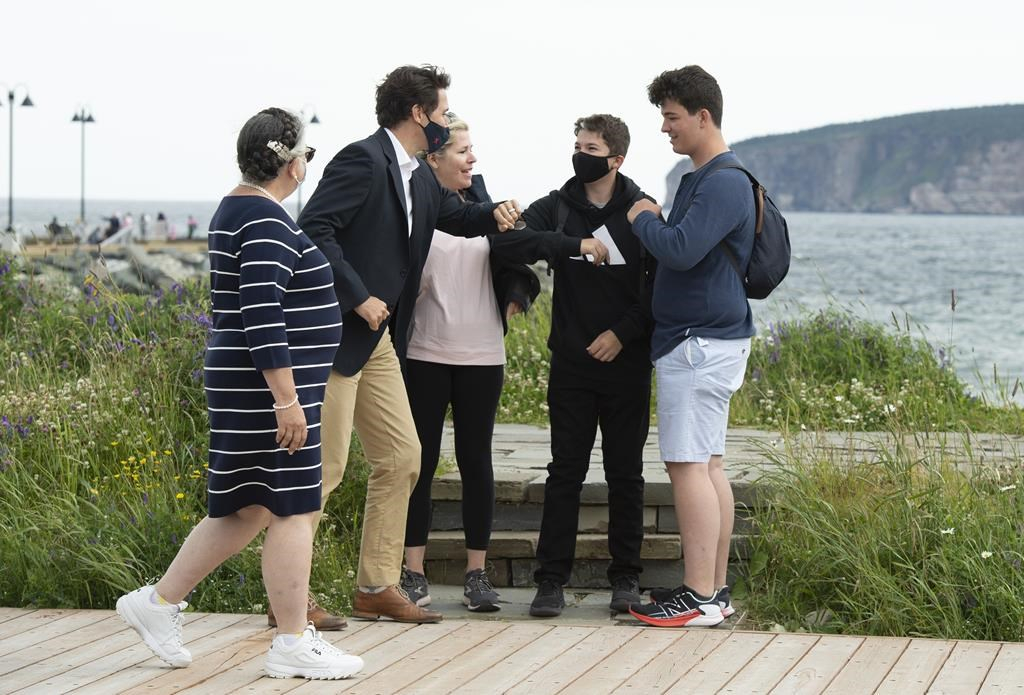 Prime Minister Justin Trudeau greets tourists as he takes a stroll on the boardwalk near the Percé Rock with Minister of National Revenue Diane Lebouthillier following a meeting Wednesday in Percé, Que. Photo by Jacques Boissinot / The Canadian Press
Previous story
Next story

GASPÉ, Que. — Prime Minister Justin Trudeau travelled to Quebec's Gaspé region on Wednesday and made a campaign-style announcement of $25 million to expand a wind turbine plant to produce blades destined for markets in the United States and Europe.

The project is a joint partnership with the Quebec government and plant owner LM Wind Power, a Danish subsidiary of General Electric, to produce 107-metre-long blades that the federal government says would be the largest in the world.

“We have the skills, expertise and resources here in Canada to be leaders in clean technologies,” Trudeau told a gathering at the plant in Gaspé, about 700 kilometres northeast of Quebec City, alongside Industry Minister François-Philippe Champagne and local MP and federal Revenue Minister Diane Lebouthillier.

“And our government will continue to take real actions to develop our industrial advantage when it comes to renewable energy.”

Trudeau repeatedly cited the turbine project as an example of how the need to fight climate change can lead to the creation of high-paying, green energy jobs.

Wednesday's announcement also gave him an opportunity to visit a riding that could be hotly contested in an eventual election.

Trudeau has refused to confirm whether there will be a fall election, but he has done little to quell the rumours with his recent flurry of travel and spending announcements. With speculation that an election call is weeks away, Trudeau quickly criticized the Conservatives following Wednesday's funding announcement.

After listing a series of green energy investments his government has recently made, the prime minister said, “It's been six years I've been trying to explain to Conservatives — who refuse to listen, but Canadians understand well — that fighting climate change and protecting the environment is the way to secure the jobs of the future.”

The Gaspésie—Les Îles-de-la-Madeleine riding narrowly remained Liberal in the last election, with Lebouthillier defeating her Bloc Québécois rival by fewer than 700 votes. In just over a decade, the mostly rural riding in the east of the province has been held by the Bloc, the NDP and the Liberals.

Trudeau denied several times that Wednesday's announcement was any kind of election preview, and he challenged any opposition leaders skeptical of his motives to go and talk to the workers who would benefit from the investment.

“It's not an electoral interest, it's the interest of Canadian workers and the planet,” he said.

“It's not an electoral interest, it's the interest of Canadian workers and the planet," Prime Minister Justin Trudeau said at Wednesday's announcement, shrugging off election call rumours.

The project to expand LM Wind Power's Gaspé plant will cost some $160 million. The federal government said in a news release it will provide “up to $25 million” that will help create 200 jobs and “maintain approximately 380 additional jobs for Canadian workers.”

Quebec Energy Minister Jonatan Julien, who was also present at the announcement, said the provincial government would provide a loan of $29 million to the project, which he said would bring and maintain much-needed quality jobs to the region.

Trudeau began his day in Percé, where he hosted an economic roundtable discussion and strolled down the town's picturesque boardwalk for a photo with Lebouthillier, exchanging elbow bumps with curious locals and tourists.

During the opening remarks of the roundtable, Trudeau announced support for upgrades to the wharf at the Port of Cap-aux-Meules in the Îles-de-la-Madeleine. He added that Ottawa is withdrawing plans to transfer the port to a lower level of government, which has been a request of the mayor of the island chain.

As part of the announcement, Trudeau said the government would install a barge alongside the wharf to provide additional mooring by next season and would conduct a study to determine what longer-term repairs are needed.