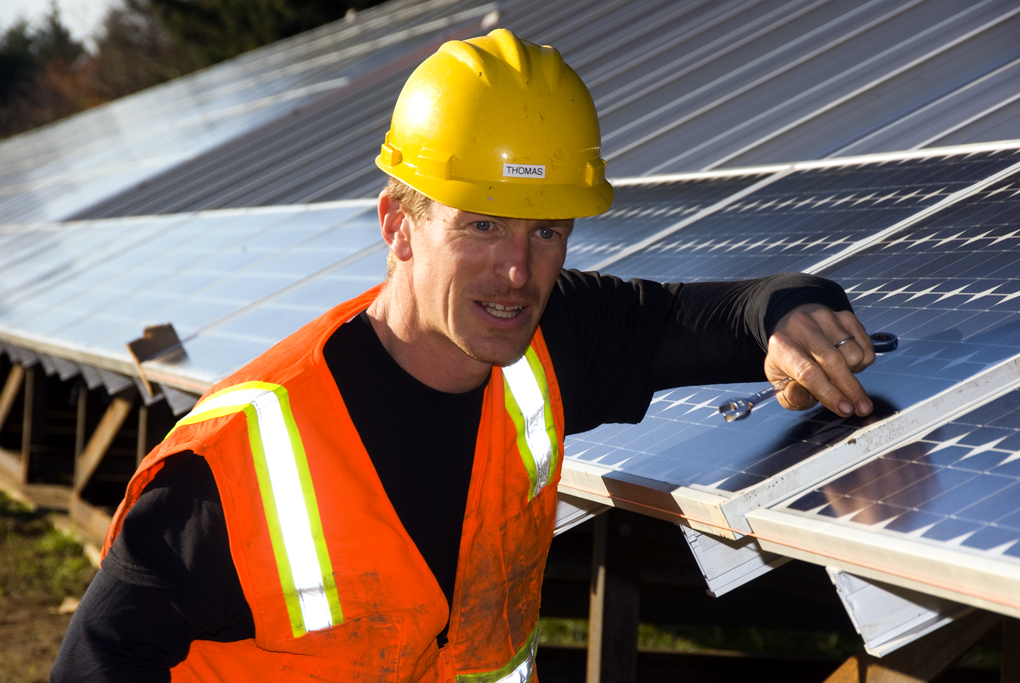 A new poll found a majority of fossil fuel workers recognize the threat of climate change and support Canada pivoting to a net-zero economy. Photo by Oregon Department of Transportation / Wikimedia Commons (CC BY 2.0)
Previous story
Next story

A majority of Canadians working in fossil fuels are interested in switching to jobs in the net-zero economy, but are worried about being left behind, according to a new poll.

The poll, released Wednesday morning, was done by an oilpatch worker-led organization, Iron & Earth, in partnership with Abacus Data, and surveyed 300 fossil fuel workers across Canada from May 24 to June 11.

Ninety per cent of workers surveyed believe they could transition to at least one type of net-zero technology with 12 months or less of training, according to the poll results.

Edmonton-based machinist Stephen Buhler has worked in oil and gas for over 12 years and says we can’t afford to delay the transition away from fossil fuels any longer.

“Not making the transition means that a lot of workers like myself are going to be stuck with jobs that aren't in demand the way that they were before,” he said.

The poll also showed 61 per cent of workers worried about having to invest money into retraining, and 64 per cent were concerned with the time commitment involved.

Nearly 85 per cent of workers said they would participate in a paid training program of 10 days or less, with that number dropping to 70 per cent if they had to pay out of pocket.

A new poll from @abacusdataca and @IRONandEARTH found 69% of Canadian fossil fuel workers are interested in careers in the net-zero economy. The key to a just transition is paid, rapid upskilling training for fossil fuel workers, says Luisa Da Silva.

According to Iron & Earth’s calculations, Da Silva said, it would cost approximately $10,000 on average to rapidly upskill one worker, and to do the entire fossil fuel industry workforce would cost upwards of $5.5 billion.

Because many workers live in rural communities, Da Silva said it’s also vital to bring the training directly to those workers, so it is inclusive and accessible.

The data showed workers in the 45-plus age category were less confident in their ability to thrive in a net-zero economy than younger workers.

“It is definitely a little terrifying to be close to the end of your career, thinking about retirement, and all of a sudden, the entire world around you is going to be changing, and you’re told that the thing you were doing before is no longer needed or wanted,” said Buhler.

As a younger worker, Buhler said older workers should be given supports and noted they will be valuable for the short-term work needed to decommission and refurbish existing infrastructure.

Despite an overall high desire to switch to net zero and broad recognition of the threat of climate change, the poll found 60 per cent of workers worry they’ll be left behind in this transition without further training or career support.

“Until there is action by the government, which includes a just transition plan with paid training for fossil fuel workers, it's understandable that a lot of workers may be hesitant,” said Da Silva.

Ultimately, it all boils down to jobs, said Ed Brost, who worked for Shell for 30 years before retiring to start his own consulting company.

“People need jobs, they need income, they have to take care of their families and their needs, and people are talking about changing your job … of course, it's going to be apprehensive. I would be,” said Brost.

He said no one has to be left behind, but it’s up to our governments to show there is a path forward.

Iron & Earth is pushing for the federal government to support a national upskilling initiative so workers can be confident they won’t have to pay out of pocket for training, and it will be quick to make the switch.

Gil McGowan, president of the Alberta Federation of Labour (AFL), said coal transition policies the AFL helped create when Alberta began phasing out coal-fired power plants will serve as a valuable blueprint for the much larger transition away from oil and gas.

Wage top-ups for unemployment insurance, training vouchers for $12,000 and pension-bridging packages were all part of a transition package negotiated with the Alberta government, but McGowan said one thing missing from the coal transition package was a guarantee of employment.

Despite any shortcomings, he said the coal transition has been successful and much quicker than anticipated, lending hope to the idea that an oil and gas transition can follow suit.

“The thing is, the number of workers in coal is tiny compared to the number of people working in oil and gas,” said McGowan. “So scaling up this approach is going to be much more challenging.”

With over 30 years of experience in the oil and gas industry, Brost said transitioning will provide some immunity from boom-and-bust cycles, which, for younger workers especially, should be something to get excited about.

“I've been in the sector during good times and the bad, and it's really scary when you know that the company you're working for is going to cut the workforce by two or three or five per cent,” he said.

But workers need a just transition plan if they are to benefit from the long-term growth promised by renewable energy and green infrastructure, and McGowan said the Alberta government will continue to bury its head in the sand until “our federal government actually starts implementing policies instead of just talking about them.”

Do we really believe that the

Do we really believe that the fossil fuel industry exists to make jobs for workers? The folks who do the labour in that industry may make better wages than many workers in other fields, but jobs are expensive to create in capital intensive industries like in situ mining and fracking.....plus they can often be done cheaper by machines.

By all means, lets find other work for the men and women living off the fossil fuel industry....but lets not forget the hundreds of thousands of other Albertans........and Canadians in general.........who work in the food or entertainment industries.

The gig economy is not really sustainable either...and it strikes me as just a tad privileged to ask government to guarantee extractivist jobs while ignoring the growing inequities between the carbon and the non carbon economy.

I suspect a total job creation, wage guarantee program may be necessary.