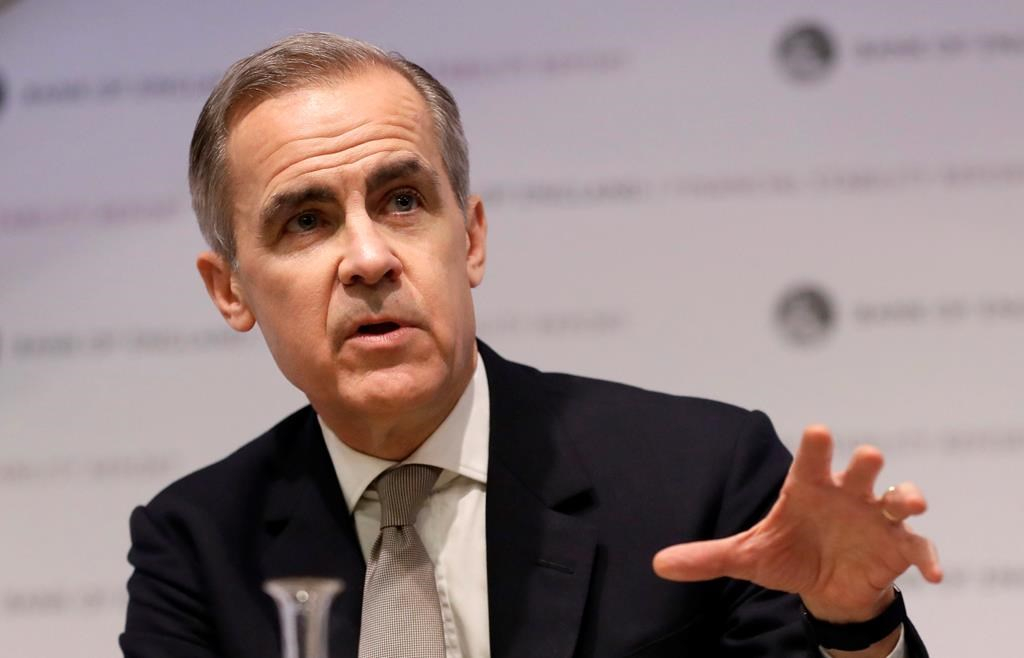 Mark Carney, governor of the Bank of England, speaks at a Bank of England Financial Stability Report Press Conference, in London on Monday, Dec. 16, 2019. THE CANADIAN PRESS/AP/Kirsty Wigglesworth, FILE
Previous story
Next story

OTTAWA — Mark Carney won't be on the Liberal ticket if there's an election this fall.

The former governor of the Bank of Canada and the Bank of England told The Canadian Press he's made commitments to help in the global fight against climate change and he can't walk away from them just a few months before a crucial United Nations conference.

"I thought long and hard on this because I believe strongly in public service … and in the government's agenda, which I fully support," Carney said in an interview Tuesday.

"In the end, despite the temptation to running and the wrestling with it, a commitment's a commitment."

Carney is the UN special envoy on climate action and finance and also chairs the Glasgow Financial Alliance for Net Zero, which aims to bring together banks and asset management firms worldwide to accelerate the transition to an economy based on net-zero carbon emissions.

His work will be crucial to the success of the UN climate conference, known as COP26, which is scheduled to run from Oct. 31 to Nov. 12 in Glasgow.

"It's a critical time in the COP26 process. I made commitments to the (UN) secretary-general and the U.K. prime minister to organize the private sector for net zero, for a net-zero economy and we have tremendous momentum and I don't want to break that momentum," Carney said.

"I think this is the best contribution I can make right now for Canada, arguably the world, but also for Canada because this matters. This matters hugely to us and this is something I can do, I'm in the middle of and I need to see it through."

Carney did not rule out running for the Liberals at another time.

Prime Minister Justin Trudeau is widely expected to call an election for this fall. If he does, Carney said he wanted to put an end to rampant speculation that he would run in a riding in Ottawa, where he lives.

Mark Carney says he's made commitments to help in the global fight against climate change and he can't walk away from them just a few months before a crucial United Nations conference. #cdnpoli #COP26

Infrastructure Minister Catherine McKenna announced last month she would not seek re-election in Ottawa Centre. Her surprise decision opened up some prime political real estate that could have become a launching pad for Carney.

There had also been speculation that Ottawa South MP David McGuinty or Kanata-Carleton MP Karen McCrimmon might step aside to open up their Liberal ridings for Carney.

Carney promised in April, during his political debut at the Liberal Party's virtual convention, to do whatever he can to support the party.

His name has been bandied about as a potential Liberal leader for at least 10 years.

While he was still Bank of Canada governor in 2012, Carney quietly flirted with the idea of a leadership run, courted by Liberals desperately searching for a new saviour after the 2011 election flame-out.

But amid criticism that even the smallest whiff of partisanship was undermining the independence crucial to a central banker, Carney eventually squelched the speculation by saying he’d just as soon become a “circus clown.” He left Canada shortly thereafter to take over the helm of the Bank of England.

He returned to Canada last summer and earlier this year released a book promoting his vision for a new kind of capitalism that combines the pursuit of profit with social purpose.

Catherine McKenna and Mark Carney have both decided that they can do more to support climate change actions outside the Liberal government. That says a lot about how they view the government's actions.