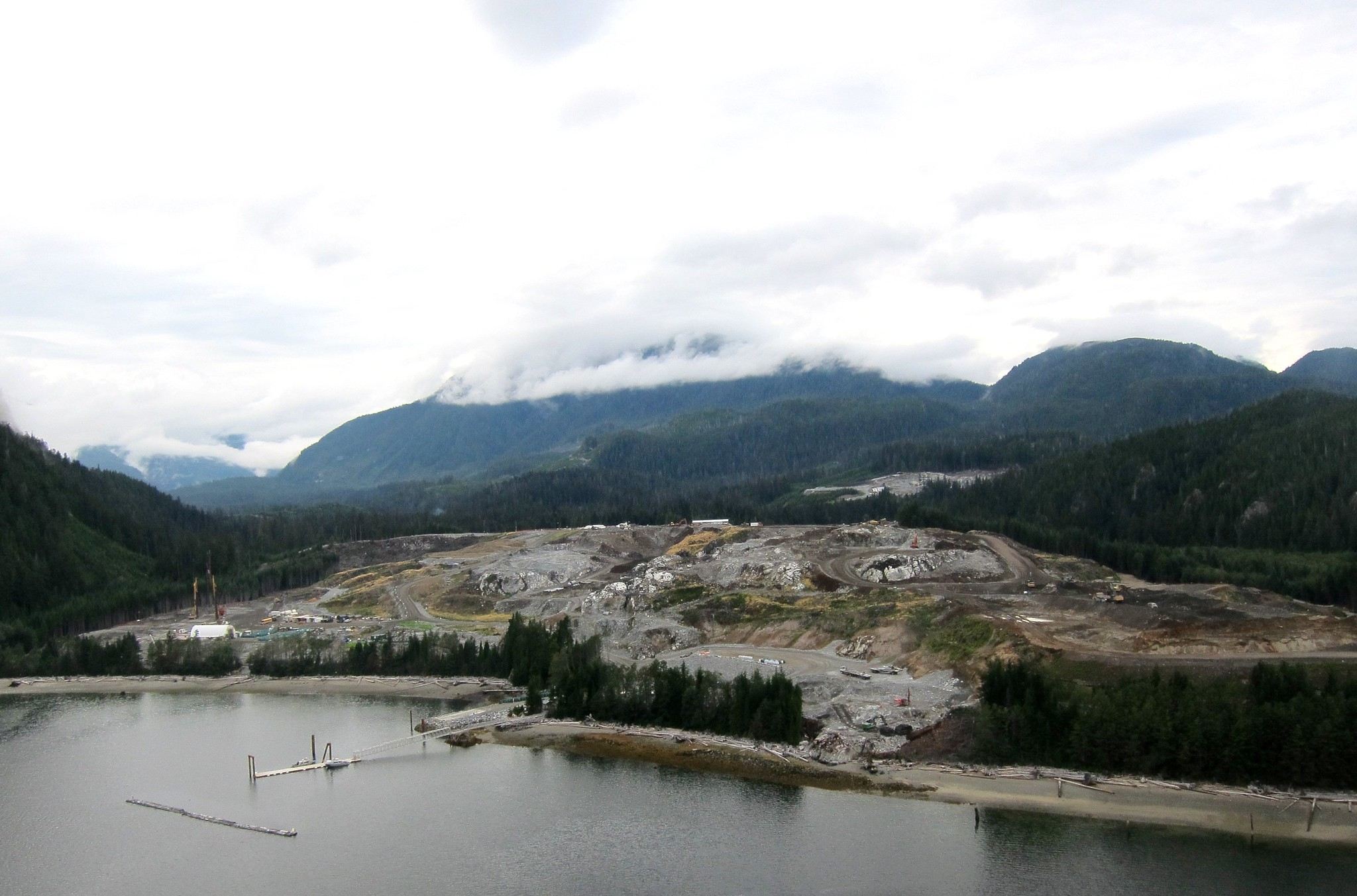 The LNG Canada project may be the last of its kind in the country, writes columnist Max Fawcett. Photo by the Province of British Columbia / Flickr (CC BY-NC-SA 2.0)
Previous story

For years now, the oil and gas industry has touted natural gas as a so-called “bridge” to a low-carbon future. Not surprisingly, it was one they intended to help build and use to transition their businesses away from fossil fuels at a leisurely pace. But if a flurry of recent announcements is any indication, that bridge may be about to collapse.

On Wednesday, the Quebec government rejected a proposed $14-billion liquefied natural gas (LNG) project to export western Canadian gas, citing its environmental impacts and ability to interfere with the transition to cleaner energy. And while industry advocates and conservative politicians were predictably outraged by the decision, it’s hardly the only LNG project to die on the vine lately. In April, Pembina Pipelines announced it was pausing its Jordan Cove project in Oregon due to “the impact of recent regulatory decisions,” while the Annova LNG project in Texas was scrapped in March due to “changes in the global LNG market.”

Those changes are about to pick up speed. As we approach this November’s United Nations Climate Change Conference in Glasgow, Scotland, the pressure being applied on countries to reduce their emissions will only increase. That pressure is increasingly coming from the global financial community, where people like former Bank of England and Bank of Canada governor Mark Carney are building trillion-dollar alliances that seem ready to fight harder than ever on this front.

That pressure is already being felt, it seems. In Japan, a draft policy from the Ministry of Economy, Trade and Industry would see the country — one of the biggest importers of LNG in the world — nearly double its renewable energy target for electricity generation, from 22 per cent to 24 per cent by 2030 to 36 per cent to 38 per cent. As a result, the share of electricity generated from burning LNG would drop from 56 per cent to 41 per cent.

But that might not even be the worst news this week for Canada’s LNG enthusiasts. The Wall Street Journal ran an exclusive story about a potential breakthrough in battery storage technology, one that could transform wind and solar energy into more stable and predictable sources. The company, Form Energy, is backed by Breakthrough Energy Ventures, a climate investment fund that counts Bill Gates and Jeff Bezos as investors, and it’s led by a CEO, Mateo Jaramillo, who developed Tesla’s Powerwall and worked on some of its earliest drivetrains.

According to Jaramillo, his company has developed “the kind of battery that you need to fully retire thermal assets like coal and natural gas (power plants).” That battery doesn’t depend on so-called “rare-earth” minerals and other exotic commodities that are in perpetually short supply. Instead, it uses iron, one of the most abundantly available commodities on the planet, and one that can be produced with very few emissions under the right circumstances.

Best of all, it checks in at $20 per kilowatt-hour in energy capacity costs — exactly the figure that academics have said is needed to make the dream of a totally renewable grid into reality. As Vox’s David Roberts wrote just two years ago, “that’s around a 90 per cent drop from today’s costs. While that is entirely within the realm of the possible, there is wide disagreement over when it might happen; few expect it by 2030.”

If it has, in fact, actually happened, this is very bad news for anyone hoping to develop a new LNG export facility in Canada. After all, it was hard enough to navigate the regulatory and political challenges, never mind attracting the billions of dollars needed to actually build it. But if the companies and communities proposing these projects can’t predict the long-term demand for LNG with any certainty, that much-ballyhooed natural gas bridge might have just become a bridge too far.

There is still a lot of road left to pave between where we are today and where we need to get by 2030. Form Energy’s battery technology needs to be commercialized and scaled up, along with the sources of renewable electricity that would be stored by it. This will take time and money, and it should allow a project like LNG Canada, which has some of the lowest associated emissions of any LNG project in the world, to proceed with construction.

But if it goes ahead, it will be the last of its kind here in Canada. Form Energy isn’t the only company chasing the holy grail of battery storage technology, and one of its many competitors could easily come along with an even better and cheaper battery technology. The future is electric, and that future is coming faster than many people thought possible. Those who still insist on betting against it are about to learn a very expensive lesson.

Can we have a little more

Can we have a little more realistic analysis in our news stories?
" ... exclusive story about a potential breakthrough in battery storage technology, one that could transform wind and solar energy into more stable and predictable source ..."
And we are going to transform this laboratory level technology into a replacement for stand-by natural gas generators in 10 years? This article is promotional hype. Meanwhile, China will not stop building or running coal fired power stations, generators that could be converted to LNG within their design lifetimes much more cost effectively than replacing them with solar and cutting edge batteries.

There are other large-scale

There are other large-scale battery storage technologies out there too that use cheap and abundant materials, and some have already left the lab and entered commercialization on large scales.

In addition, exported North American LNG is currently outcompeted by China's proximity to Russia and new gas pipelines. China's coal imports are peaking and being replaced by gas, nuclear and renewables.

Paragraph 7: "Best of all, it checks in at $20 per kilowatt-hour .....". Well for my electricity I'm paying less than 10 cents per kilowatt hour! I think you mean $20 per kilowatt. It's important for an energy reporter to distinguish between energy and power, kWh vs. kW !!!

Your quotation from this

Your quotation from this article omitted a critical part,
"Best of all, it checks in at $20 per kilowatt-hour *in energy capacity costs*..."
This is about energy storage, not energy supply, and this is measured in kilowatt-hours, not kilowatts. The confusion seems to be yours.

Exactly. These days the

The key to the battery story

The key to the battery story is in the Vox article, for which a link was provided:

I've got the nerve to wonder if Max picked up that URL from me posting in it in several NO comments since Vox published two years ago. David Roberts' climate work (for multiple employers now, I think he's moved on from Vox) is outstanding. I'm the guy who's always posting that we need more direct quotes from relevant professors and scientists, but David has self-educated, over a couple of decades now, into a top-notch "science explainer" journalist, and his work at Vox, including the 6000-word article on how different levels of the electrical grid hand off to each other, is exemplary.

The $20 of capital per kWh figure is from an MIT study that calculated it necessary to hold electricity prices down to 7.5 cents per kWh from an all-renewable, variable, "non-dispatchable" base generation.

But the basic calculation isn't hard: if you can get 2000 charge/discharge cycles out of it, then each would clock in at 1 cent per kWh stored. Because you can't get perfect efficiency, and because you spend up-front and have to borrow the money, it'll actually add 2 cents per kWh. If the wind farms can generate for 3 cents, then you can sell in bulk for 5 cents, and after transmission and distribution costs, 7.5 cents.

But with lithium-ion, you'd be adding in another 10-15 cents per kWh, and people wouldn't pay for it.

Thanks for supplying much

Thanks for supplying much needed analysis - however, I still don't get the practicality of these batteries. 2000 charge/discharge cycles (1 a day for 5 years) might be a lot for an 18v portable tool battery, but if we are looking to replace a gas powered utility, aren't we looking for something an order of magnitude better(bigger?) in terms of lifetime? And do these prototype batteries actually scale up to megawatts?

Can someone provide an

Can someone provide an analysis of the large-scale, liquid Vanadium Redox Battery in Tasmania?

Why aren't we seeing more of these?
How does it compare with:
- the large-scale Tesla battery in South Australia?
- the Hydrogenics method used in Germany?
- the CAUW Hydrostor method developped in Toronto?
- the CAUG method used in various places?
- flywheels?
- the Pumped Water method used at Niagara Falls?
- others?