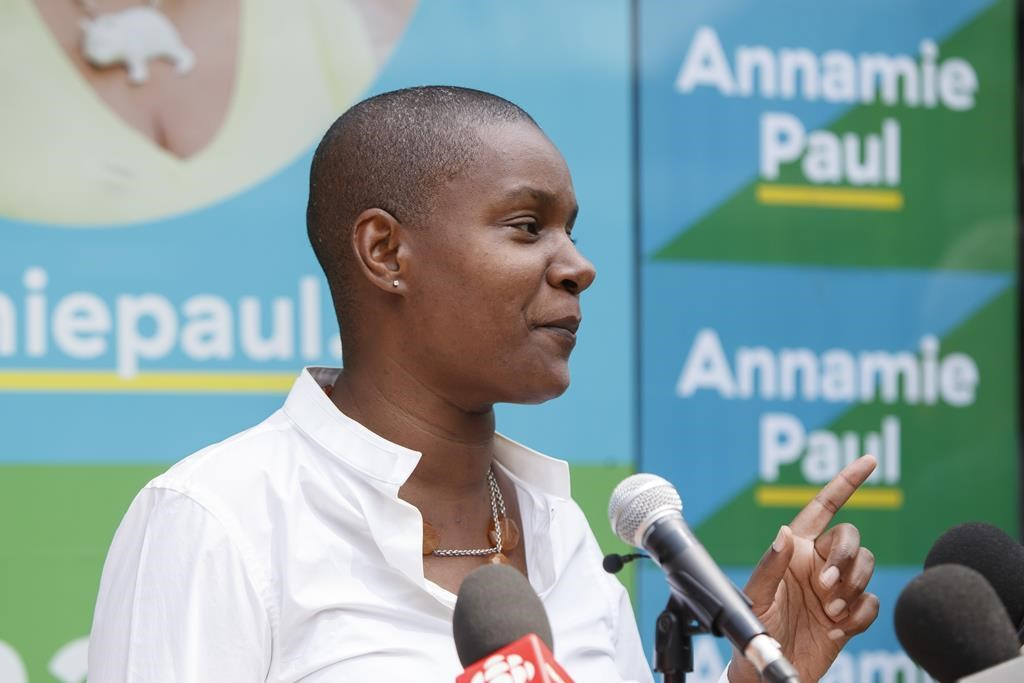 OTTAWA — Green Leader Annamie Paul says party brass still plan to hold a national convention next month even if a federal election campaign is in full swing, as the list of items distracting attention from an impending fight at the polls continues to mount.

“Our federal council decided to hold the AGM on Aug. 21, and that’s going ahead,” Paul told reporters Tuesday. “Preparations are underway.”

The choice by the federal council — the party's 13-member governing body — comes after its five-person executive council enacted on July 16 a “state of electoral urgency,” according to two senior party sources who were not authorized to speak publicly on the matter.

The move speeds up the nomination process for candidates in anticipation of a likely election. It follows a similar declaration by the Liberals last month and marks the latest sign that parties are gearing up for a battle at the ballot box.

National conventions, which focus on policy positions and executive elections, will suck up time and resources as Paul tries to ramp up volunteer recruitment, fundraising and election readiness.

Paul said she hopes the governing Liberals will avoid triggering an election since other priorities demand immediate attention, including the climate and opioid crises.

“There are just a lot of things that suggest we need to get back to Parliament, and September should be the return from the summer recess and not a summer election,” Paul said following a climate roundtable she hosted featuring members of her new shadow cabinet.

The party has been mired in internal strife for the past few months as a handful of federal councillors seeks to oust Paul ahead of an expected writ drop in the coming weeks.

Some of them launched a legal proceeding against her on behalf of the party last week in the latest manoeuvre to depose the top Green.

However, party president Liana Canton Cusmano on Thursday sent an email to party members obtained by The Canadian Press that said it was Paul who set off the legal wrangling. She did this, the president said, by launching an arbitration process that shut down a planned non-confidence vote against her by the federal council and halted a process to suspend her membership.

Annamie Paul said she hopes the governing Liberals will avoid triggering an election since other priorities demand immediate attention, including the climate and opioid crises. #Cdnpoli #Greens #politics

Paul has characterized the fusillade as a “one-sided attack” by a coterie of outgoing officials.

The federal council has also opted to withhold some $250,000 in funding that had been earmarked for Paul's campaign, according to three senior party sources. The cancelled cash transfer means fewer dollars to put toward advertising, research and staff resources.

Citing a years-long fiscal imbalance, executives also laid off about half of the Greens' employees earlier this month — despite Paul's objections — amid factionalism and internal clashes that bubbled into public view when New Brunswick MP Jenica Atwin defected to the Liberals in June.

Paul, who has no seat in the House of Commons, needs to concentrate all the resources she can muster to win in the riding of Toronto Centre, a Liberal bastion.

She lost there to Liberal Marci Ien in an October byelection — they received about 33 per cent and 42 per cent of the vote respectively — and to then-finance minister Bill Morneau in 2019.

The last Green national convention occurred in 2018, as the meeting — they typically happen once every two years — was postponed from 2020 due in part to the COVID-19 pandemic.

This report by The Canadian Press was first published July 27, 2021.