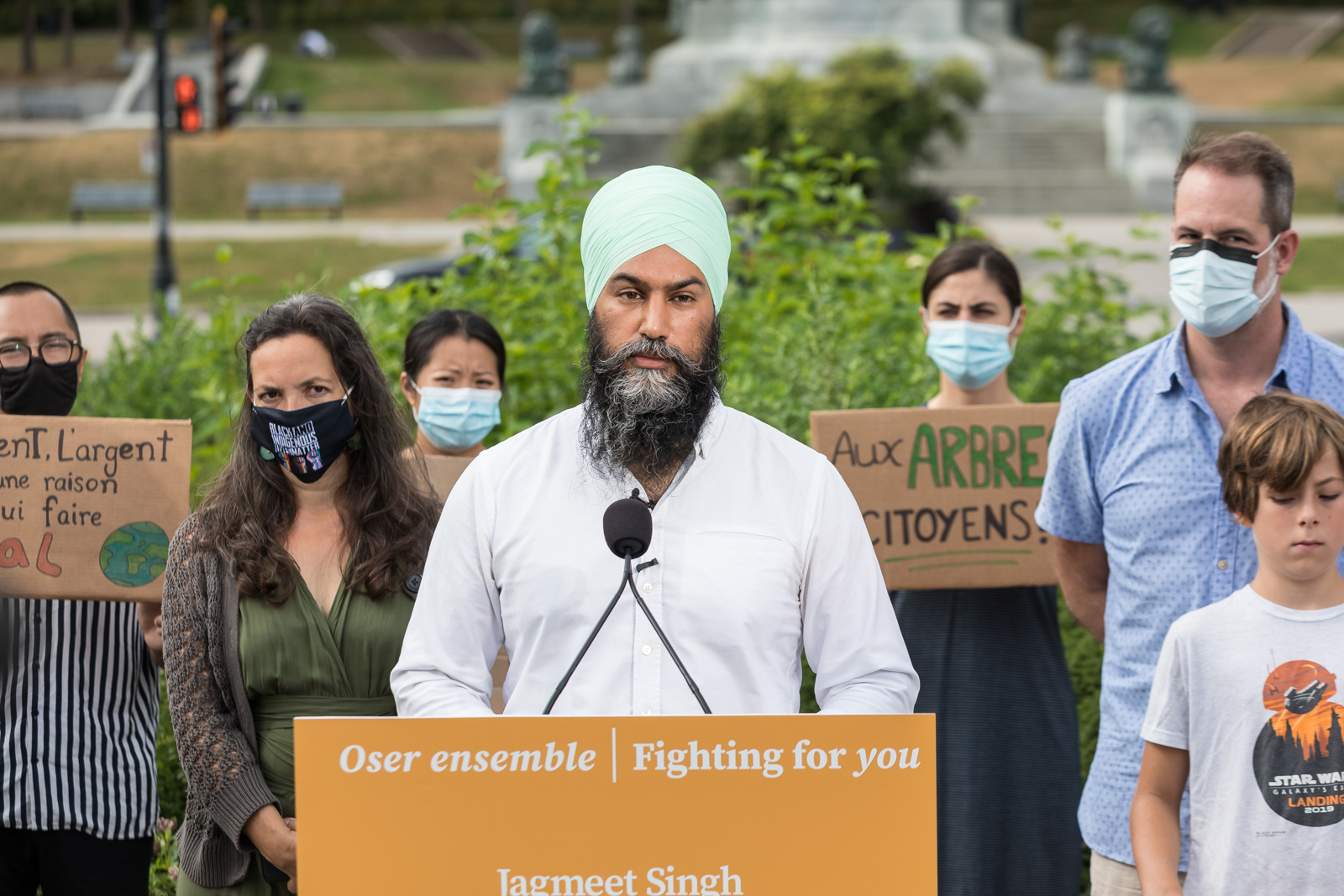 Federal NDP Leader Jagmeet Singh promises to end fossil fuel subsidies if elected, saying the Liberal government has shown a "lack of commitment" on the issue. Photo provided by the NDP
Previous story
Next story

If elected, the federal NDP would identify fossil fuel subsidies, eliminate them “once and for all,” and spend the money on the renewable energy sector, Leader Jagmeet Singh said on the campaign trail Monday morning.

Speaking from Jeanne-Mance Park in Montreal, Singh said instead of giving companies “blank cheques” that may or may not be used to achieve their goals, the NDP would make direct investments to clean up oil wells and retrofit some into geothermal plants.

“What we've seen for a long time from Liberals and Conservatives is this notion that you can give money away with really no strings attached to large corporations and hope that the money will actually end up in workers’ hands or end up in doing what we need to defend the environment,” said Singh. “That approach has been shown again and again not to work.”

Lisa Marie Barron, the federal NDP candidate for Nanaimo-Ladysmith, said the recent wildfire near her riding serves as a stark reminder of the climate crisis Canadians are facing.

“I'm also hearing from young people … and quite honestly, they're scared for their future based on everything that we're seeing around us in this climate emergency,” said Barron.

Since Justin Trudeau participated in a climate march back in 2019, Barron said he “has abandoned the young people,” and instead helped “big oil and big investors.”

“Jagmeet’s announcement is very exciting to hear because we want to be a world leader on climate action. Unfortunately, right now, that's not the case. We are a joke on the world stage, and we need to be doing better,” said Barron.

Singh also promised $500 million over four years to support Indigenous-led conservation programs to protect land, water, and forests, and advance reconciliation. Few other details were made available about the criteria or nature of the programs, but Singh said the goal is to create a fund that allows Indigenous communities to choose to conserve their land, instead of being forced to log and extract resources to create jobs.

In 2020, federal fossil fuel subsidies reached at least $1.9 billion, according to a recent report from the International Institute of Sustainable Development (IISD). The NDP said it would do a full audit to identify and eliminate those subsidies.

The promise to end subsidies is encouraging, said Bronwen Tucker, an analyst at Oil Change International, but she also wants to see the NDP commit to ending public financing through Export Development Canada — which provides an average of $13.3 billion per year in public finance for fossil fuels — and clarify whether it would also end handouts for blue hydrogen, carbon capture and storage (CCS), and other strategies to “decarbonize oil and gas.”

“@NDP believe in ending fossil fuel subsidies, period,” said @theJagmeetSingh. “It's something the Liberals have promised to do and have broken that promise again and again. NDP don't want to be like the Liberals." #cdnpoli #Elxn44

“It really ignores the best science and best models that are available that say hydrogen and CCS should be reserved for that last mile (of) decarbonization, the things that are the hardest to decarbonize, which is definitely not oil and gas production.”

Vanessa Corkal, a policy adviser for the IISD, said given the billions in support from Export Development Canada, it’s concerning “there's not a broader commitment from the NDP to also end public finance for fossil fuels.”

She said we need to expand the conversation to include not just subsidies, but all forms of government support.

“From my perspective, if funding is reducing the cost of business for fossil fuel producers, that's not something that we want to be supporting,” said Corkal, citing the $1.7 billion provided by the Liberal government to clean up orphan wells as an example.

“That money was pitched as a way to create jobs, to reclaim wells, and to clean up the environment. But research shows that what actually happened is that large companies were able to use that funding to pay for activities that they would have done anyways, and that there wasn't actually a large increase in cleanup. So, ultimately, the result of that subsidy is that it just made it cheaper for (those big oil companies) to do what they're normally doing,” said Corkal.

For the NDP to meet its goal of ending oil and gas subsidies and supporting workers instead of companies, Tucker said any federal money for orphan wells would need to be conditioned on or accompanied by regulatory change to ensure companies pay upfront for cleanup costs rather than being able to almost fully avoid them as the current structure allows.

Tucker said the Liberal government’s creation of and support for fossil fuel subsidies like the Trans Mountain pipeline expansion project, $320 million to support the recovery of Newfoundland’s offshore oil and gas industry, and funding for carbon capture and storage, and hydrogen are not in line with the best science we have.

“The idea that we can just continue to expand fracking and (the) oilsands by building CCS and hydrogen that the government pays for is really wild,” said Tucker, adding it’s “a ridiculous amount of money” that would be better spent on green industries, transitioning workers, and public services.

In response to the NDP’s announcement, Atiya Jaffar, 350.org Canada’s digital manager, said ending fossil fuel subsidies is “a necessary first step” for Canada to achieve its global climate obligations, and calls for “a moratorium on fossil fuel expansion and a big, bold just transition plan that supports workers and communities.”

With the recent International Energy Agency report calling for the end to all new investment in fossil fuels, any credible and robust climate plan must include a commitment to immediately end all subsidies, public finance and other fiscal support, said Julia Levin, senior program manager for climate and energy at advocacy group Environmental Defence.

“We can't be paying oil and gas companies to do something that we could force them to do in another way,” she said.

“By paying them, by lowering their cost of business, we are still incentivizing ongoing and increased production, which is literally pouring fuel on the fire.”

Justin Trudeau promises $6B for health care. NDP says it’s heard that before

Ask Alberta NDP leader and former Premier Rachel Notley what she thinks of Singh's proposal to end (or at least limit) fossil fuel subsidies.
How does Notley respond to the recent IEA ("no investment in new fossil fuel supply projects") and IPCC reports?
Notley forbid her NDP sheep from posing for pictures with federal NDP leader Jagmeet Singh.
Deputy premier Sarah Hoffman: "I recall many times Jagmeet Singh has not been a friend to Albertans, to working people or to our nation when it comes to energy policy."
Premier Notley heaped scorn on federal NDP leader Jagmeet Singh several times over Trans Mtn pipeline:
"To forget that and to throw [working people] under the bus as collateral damage in pursuit of some other high level policy objective is a recipe for failure and it’s also very elitist."
Would Notley dismiss the IEA and IPCC as elitist?

Well Singh is going to have

Well Singh is going to have to reconcile his position on this with John Horgan and Rachel Notley, not to mention the unions that represent workers in these sectors that financially support the NDP. With baggage like this, it would be easy to speculate that, if elected, loyalties will surface as we witnessed in BC with the NDP and John Horgan. It was the BC Liberals who brought in liquified natural gas, vehemently opposed by Horgan while in opposition, then vehemently embraced by Horgan when he came into power.

This is rich. Has he

This is rich. Has he discussed this with John Horgan? I doubt it. How about Rachael Notley? Unlkely. It's good see the NDP finally come into the 21st century on these issues. Better late than never!