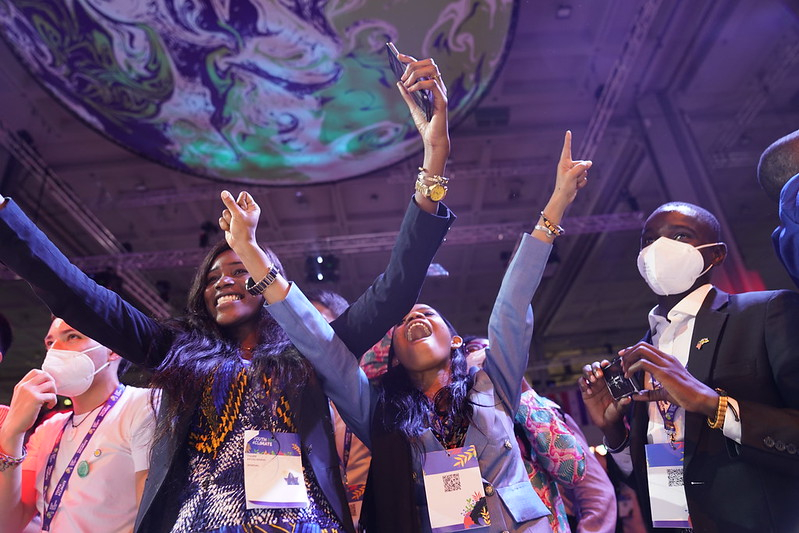 World leaders have met annually since 1995 to talk about climate change, and this year, they finally asked young people ahead of time about ways to create jobs in renewable energy, push countries to prioritize low-carbon action, and how to get climate justice.

Nearly 20 demands to COP26 came out of the discussions, which circled around meaningful participation, just transition funding, and more backing for climate change education.

One goal seeks to support young people of colour, Indigenous youth, those with disabilities, and others already working on climate solutions. Another states the need for a rapid and immediate phase-out of the fossil fuel industry by 2030.

“So that was the positive thing: to see how advanced the youth movement is and how it's shaping climate action to something that's not just renewable energy and planting trees, but something about justice and human rights,” said 25-year-old Felix Giroux-Szarek, one of two delegates representing Canada at the event.

“Anti-capitalist, anti-colonial. This fight is not just for climate change, it's a fight for something much broader.”

The Youth4Climate: Driving Ambition event was held last week and saw hundreds of participants from across the globe convene in Milan for three days. Although there's been youth participation at and in advance of the climate change conference in the past, this year's was special because it was the first pre-COP event hosted by the United Nations.

A final document emerged from the working groups and discussions that took place between Sept. 28 and 30 in Milan, which was shared with decision-makers attending COP26 with the goal of informing the negotiation process at the conference.

The climate change conference — also known as COP, short for Conference of the Parties — has brought the world together to hammer out agreements to reduce global warming. The talks gather policymakers, scientists, environmental activists, climate experts, and news media from the 197 member countries of the United Nations Framework Convention on Climate Change to set and work towards global climate change goals. This year, COP26 will take place at the Scottish Event Campus in Glasgow, Scotland, from Oct. 31 to Nov. 12.

In a press conference held after Youth4Climate, COP26 president and Conservative British MP Alok Sharma said there were three feelings he got from the event: it was inspiring, the youth spoke frankly, and they spoke the truth — that we need to do more, faster.

Nearly 20 demands to #COP26 came out of the #Youth4Climate discussions, which circled around meaningful participation, just transition funding, and more backing for climate change education.

“I hope every minister (who) was present ... felt pretty uncomfortable and severed when those messages were being delivered — the truth,” he said.

He said he was “absolutely certain” young people around the world will hold leaders accountable if 1.5 C of warming slips out of reach.

Six years after the Paris Agreement, key issues are still to be debated, yet this group of young people was able to put together a cohesive document that they agreed on in a few days, said Sharma. He then stressed events like this cannot be a “one-off” and youth need to be more adequately incorporated into UN climate events in general.

Giroux-Szarek, who will be at COP26, agrees.

He said Frans Timmermans, executive vice-president of the European Commission for the European Green Deal, said he would meet 30 minutes a day for the duration of COP26 with youth representatives for a check-in on how the meetings are going, and how the demands from the youth summit are being addressed, which Giroux-Szarek said is a good start.

“I think it's really good to also capture that time from decision-makers. And for good decision-makers, I think that's a great (thing) — having youth as allies because a lot of them are as frustrated as (us) because they're stuck in these processes,” he said.