By Morgan Sharp | News, Next Gen Insider | October 26th 2021
#28 of 99 articles from the Special Report: COP26: Uniting the World to Tackle Climate Change 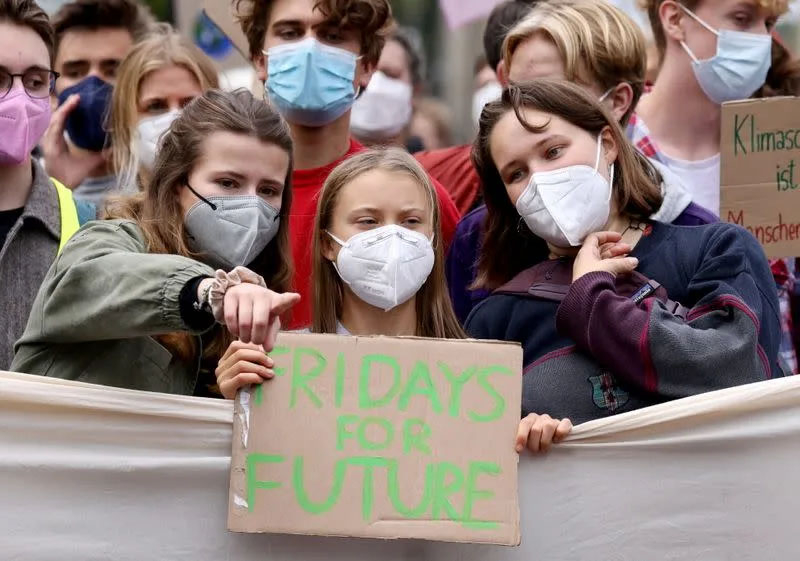 Greta Thunberg and fellow youth campaigners struck a skeptical tone at the Youth4Climate event in Milan in September. Photo by Felton Davis / Flickr (CC BY 2.0)
Previous story
Next story

Young people who attended a recent youth climate conference in Milan, Italy, presented their list of demands for world leaders Monday ahead of a United Nations meeting aimed at trying to avoid environmental devastation.

With one week left until some, but not all, world leaders show up in Glasgow, Scotland, to kick off COP26’s two weeks of climate negotiations, the young delegates from the Youth4Climate: Driving Ambition summit say the 44-page manifesto represents their effort to influence the UN meeting's outcome.

“We're working to ensure that our voices are heard at COP26,” Olivier Nihimbazwe, the delegate for Burundi who attended Youth4Climate last month, wrote on Twitter with a link to the document.

“These are concrete proposals based on science, experiences, and aspirations from 400 young leaders from all over the globe.”

COP — short for Conference of the Parties — brings the world together to hammer out agreements to reduce global warming. It has taken place since 1995. The talks gather policymakers, scientists, environmental activists, climate experts, and news media from the 197 member countries of the United Nations Framework Convention on Climate Change to set and work towards global climate goals. This year, COP26 will take place at the Scottish Event Campus in Glasgow from Oct. 31 to Nov. 12.

Youth4Climate's manifesto is a more fulsome version of a statement released soon after the event. It calls on all levels of government all over the world to take specific steps to involve young people in meaningful action on climate change.

Its authors push for net-zero emissions by 2030, by which time, the young delegates expect the fossil fuel industry to be abolished via “a complete and systemic phase-out initiated by developed countries, with the provision of support to developing countries to allow for an aspect of equity in the context of a sustainable transition.”

The document also stresses the need for nature-based solutions to preserve biodiversity and help adapt to climate change, and calculates these efforts could contribute meaningfully to the overall climate solution.

The youth delegates have included a slew of requested safeguards to ensure solutions don’t “disrespect ecosystems and local communities.”

Such solutions should always include free, prior, and informed consent, the document says, and significant provisions for losses and damages relating to any projects. It also calls on countries to create permanent representative positions for youth and Indigenous peoples to develop, deploy, monitor, and evaluate climate solutions.

Youth4Climate's demands were released on the same day the U.K., which is hosting COP26, said the world would not meet a promise by rich nations to supply US$100 billion a year in funding to developing countries by 2020, and that it would now work to get there by 2023.

Earlier this month, Youth4Climate attendees, including Swedish climate activist Greta Thunberg, decried the "30 years of blah, blah, blah" that have come out of climate talks among world leaders. The youth manifesto instead proposes binding, equitable measures going forward. It calls on politicians to ensure inclusive participation in decision-making through legal and policy tools, such as quotas for youth, Indigenous people, and marginalized groups in climate policymaking.

The manifesto urges athletes to use their platforms to inspire young people to live more sustainably, and for sports teams to drop fossil fuel and mass-polluter advertisers.

Meanwhile, the fashion industry should be looking to switch more of its production to materials and practices with a low climate impact, the document says.

The manifesto also calls for any and all research directly related to climate change coming out of universities, colleges, and publicly funded research institutes to be made accessible.

A major new poll from the UN’s Development Program (UNDP) released Monday predicted public pressure for bold climate action from the world’s major economies would likely only strengthen from here on out, with the strongest demands coming from under-18s.

“As they come of age, political leaders cannot ignore the higher expectations of this emerging, climate-aware electorate,” said Stephen Fisher, a sociology professor at the University of Oxford who took part in the research.

In most countries, youth are more likely to believe this than adults, with particularly large margins in Australia, the United States, and India (11, 10, and nine percentage points, respectively), it said.

The UNDP poll found Canadians among the most supportive on the issue of a climate emergency in the G20, with three-quarters of adults calling it such, along with 83 per cent of Canadian youth.

A youth climate strike is set to take place in Glasgow on Nov. 5 while COP26 is underway, after the leaders have left but well before any deal is reached.

The problem with over

The problem with over-reliance on "youth" is that youth is a bastion of idealism, that fades once their personal worlds are dominated by what the "adults" when I was young called "paying your own way." It isn't that, at all, but it does really bring home the reality of the difference between having "a job" and having a job that pays "real" money.

It's past time for the so-called "grown-ups" to get with the program, and if they won't do so voluntarily, to have it done involuntarily. We keep talking about parallels between Covid, climate change, and war-time. We need to ration personal carbon expenditures that aren't at all necessary.

In my 70s, I am still regularly accused of being "idealistic," and would note that the financial costs of remaining so have not been minimal, and even less so the hardships. I willingly undertook the decisions that led to them, and might well do so faced with the same questions again, but wouldn't be blind to where they'd lead.

However, with the current situation, we collectively and as individuals all bear a responsibility and decisions that have to be made will necessarily cause some level of hardship. That's not a reason to refuse to get with the program: it's a reason for those who have most to share the unjust "rewards," and take on a greater level of behavioural modifications than is available to those at the bottom of the food chain.

Homeless people, for instance, don't drive cars (or if they do, not for very long); they don't live in big houses that consume huge amounts of carbon fuel, much less fly away to foreign climes for multiple vacations every year. They've got no "consumption" left to modify, and are bearing the brunt of the downside of our general greed and sense of entitlement to things that are far, far from necessary.

One hopes that all the people attending the COP at least took electric trains as close to their final destination as possible, and flew not one more mile than necessary to get there. Or rather fantasizes that they might.