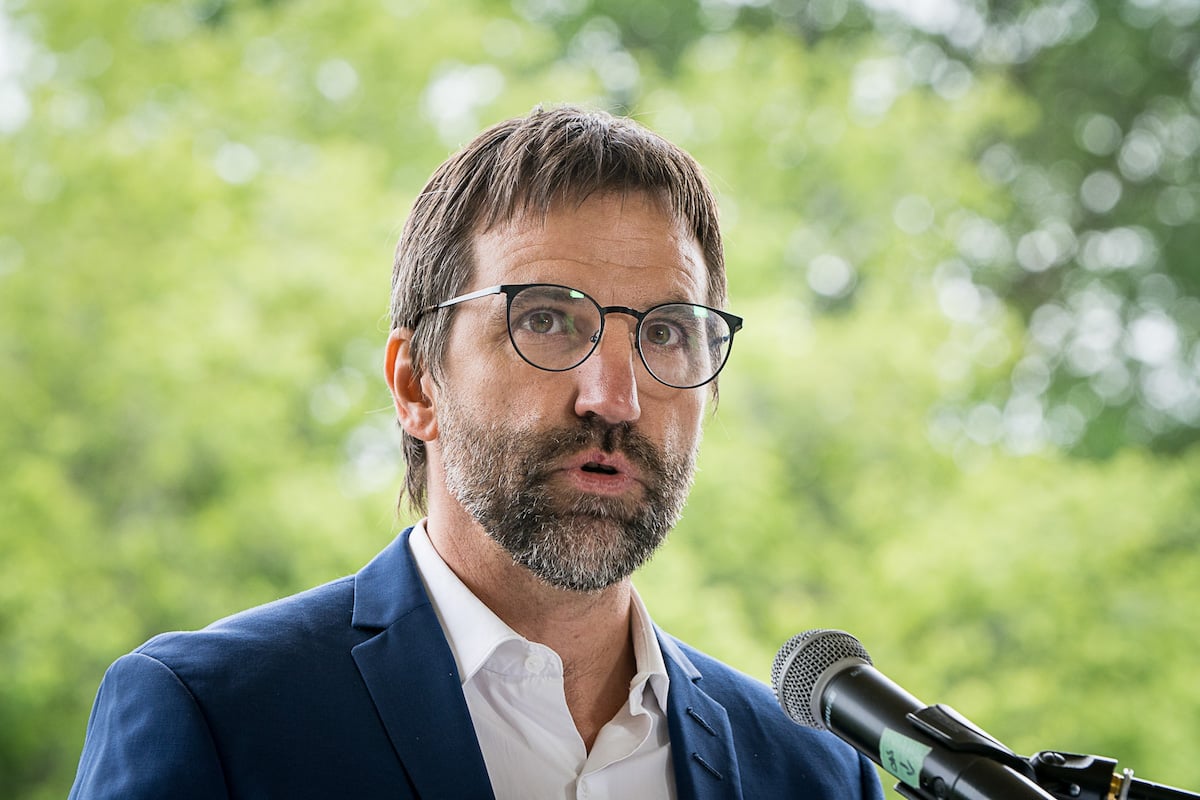 The recent federal election may have returned a status quo Parliament, but the government’s new cabinet is anything but. Veteran ministers Marc Garneau and Jim Carr are out, new faces like Kamal Khera and Sean Fraser are in, and rising stars like Anita Anand and Mélanie Joly have been promoted into higher-profile positions on the government’s front bench. But if there’s one message that emerges most clearly from this changing of the guard, it’s that the Trudeau government is preparing to press ahead on climate change.

Steven Guilbeault has been promoted to minister of environment and climate change despite making a mess as heritage minister of the rollout of Bill C-10, the government’s attempt to bring digital streaming services under the purview of the Broadcasting Act. This is the job Guilbeault clearly always wanted, given his background as former senior director for Équiterre and long-standing director and campaign manager for Greenpeace Quebec.

Jonathan Wilkinson, who took over from Catherine McKenna as the minister of environment and climate change, now slides over to natural resources. But while he’s been nominally supportive of the government’s decision to buy and build the Trans Mountain pipeline extension, he’s unlikely to offer the same sort of enthusiastic support as Seamus O’Regan did.

This realignment makes plenty of political sense, given that COP26 is just around the corner and climate change remains a winning issue for the Trudeau Liberals. But it will trigger a renewed outpouring of anger and frustration from Alberta, where Guilbeault is seen within the oil and gas industry as an even bigger enemy than Wilkinson or McKenna ever were. As University of Calgary political scientist Lisa Young tweeted, “This is not a Cabinet intended to address regional alienation in AB/SK.”

It’s worth pointing out both the finance minister and the associate minister of finance are now Albertans, which is the first time that’s happened in Canadian history. But that’s a product of their own qualifications and talents rather than a renewed attempt to placate Alberta. And while the decision to announce the new cabinet on the same day Alberta reported the results of its equalization referendum is probably a coincidence, the message being sent from Ottawa to Edmonton seems clear: no more Mr. Nice Guy.

It’s hard to blame the federal government for taking this approach, given the volume and variety of vitriol that Jason Kenney and his government have sent their way. And it seems like a fairly easy fight for the prime minister to win, given how massively unpopular Alberta’s premier is right now. Perhaps, after years of trying to placate the Prairie provinces and assuage their apparently insatiable sense of victimhood, it’s time for a bit of tough love. Few people are better qualified to mete that out than Guilbeault.

Nobody should be confused about where the power lies with this government, though. Despite the new cabinet and the fresh faces, it’s still heavily concentrated in the offices of the finance minister and especially the prime minister. Now, more than ever, Justin Trudeau has surrounded himself with familiar faces, from Guilbeault and Joly to old friends like Marc Miller, Seamus O’Regan and Dominic LeBlanc. Those expecting the prime minister to quietly hand the reins to Chrystia Freeland may be sorely disappointed, because this feels far more like a cabinet of someone preparing to fight than someone getting ready to quit.

And while that fight will include wrapping up child-care agreements with the remaining provinces and continuing the transition from pandemic support to economic growth, it will be defined by what the government does on climate change. As economist Mark Jaccard noted in a recent op-ed, that will depend an awful lot on what happens in — and to — Alberta. “The critical industrial policy will be the Liberals’ promise to cap and then reduce emissions from oil and gas production,” he wrote.

Kenney won’t like that. Neither will the many Albertans who are more heavily invested in defending the past than embracing the future. But after years of playing nicely with them, whether that involved building pipelines or paying billions of dollars to clean up abandoned oil and gas wells, it seems like the prime minister has decided to stop waiting for Alberta to get the memo on climate change. Now, it seems, he’ll be the one sending it.

Max Fawcett, who recently urged readers to re-elect Trudeau's Liberals, is confident that the latest round of musical chairs on the Titanic bodes well for climate action. Is this optimism justified?
*
Fawcett: "climate change remains a winning issue for the Trudeau Liberals"
Or their biggest failure, depending on your point of view. Trudeau shows no signs of standing up to Big Oil and the Big Banks.
*
Fawcett: "Guilbeault is seen within the oil and gas industry as an even bigger enemy than Wilkinson or McKenna ever were"
Guilbeault will do as he's told. And tap dance around the truth just as nimbly as his predecessors.
The oil & gas industry and their financial/political backers are banking on global climate action failure. The only scenario in which oilsands expansion makes sense.
*
PM Trudeau (2016): "There is growth to be had in the oilsands. They will be developing more fossil fuels while there's a market for it, while we transition off fossil fuels."
Trudeau (2017): "No country would find 173 billion barrels of oil in the ground and just leave them there."
No indication Trudeau has changed his mind.
On climate, the Liberals deserve every ounce of scepticism journalists and citizens can muster.

This government has already

This government has already done more in the climate file then all previous Canadian government combined. Let’s not forget that the same Canadian voters who chose the liberals climate policies including carbon pricing also chose a bunch of provincial leaders who have done everything they can to kill even the admittedly inadequate federal climate measures we’ve seen so far.

I'm not seeing progress. This government talks a good line, but they don't put their money where their mouth is.
Let's not forget that federal and provincial jurisdictions are different. And that the spectre of a rising-again Conservatives encouraged many people to vote for the party they thought could beat them.
In the provinces, none of the Conservative governments were elected on the basis of truthfulness. They all lied about both the facts around issues, and about what they would actually do once elected.
And they continue to lie about what they've done.
We need a third party public oversight organization to fact-check and disambiguate the falsehoods that roll off all their tongues as easily as tumbleweed rolls across barren prairie.

The test of competent

The test of competent government is whether it did what was necessary -- not whether it did more than its predecessors. Which in this case amounts to next to nothing. Previous governments did less than nothing in terms of reducing emissions.

Another test of competent government is whether it bases its policies on the best available science.
The IPCC advises that the world must nearly halve GHG emissions by 2030 and eliminate them by 2050 to keep warming below the danger limit of 1.5 C.
Backed by Trudeau's Liberals and the Big Banks, the fossil fuel industry intends to blow past those targets, expanding production with no end in sight. Not once has Trudeau acknowledged the necessity of cutting fossil fuel production. The Liberals' plan to "green" fossil fuels, not get off them. Trudeau & Co. are following Big Oil's playbook: delay, delay, delay.
Transitions start by moving in the direction you wish to travel. Doubling down on fossil fuels takes us in the wrong direction. Building fossil-fuel infrastructure locks us into a fossil-fuel future. When you're in a hole, stop digging.
More warming is already locked in. The time to head off dangerous climate change is now. We won't get a second chance.

M Mulrooney wrote: " the same Canadian voters who chose the liberals climate policies including carbon pricing also chose a bunch of provincial leaders who have done everything they can to kill even the admittedly inadequate federal climate measures we’ve seen so far."
Doubtful. Conservative voters elected conservative premiers in Ontario, Saskatchewan, and Alberta (among other provinces). Presumably very few of these same conservative Canadians voted Liberal federally. Certainly not in the West.

Fawcett: "But while [Jonathan

Fawcett: "But while [Jonathan Wilkinson has] been nominally supportive of the government’s decision to buy and build the Trans Mountain pipeline extension, he’s unlikely to offer the same sort of enthusiastic support as Seamus O’Regan did."
Really?
*
"And, between Trudeau’s 2017 speech promoting tar sands expansion to fossil fuel CEOs in Houston, Jonathan Wilkinson’s social media looking like a Shell advertising campaign, or Seamus O’Regan forming a secret committee with Big Oil during the pandemic, this lobbying seems to have an effect. With this, it’s fair to be worried that Trudeau and his cabinet are already drinking the fossil fuel Kool-Aid when it comes to the timeline for a transition."
"Don’t ‘bothsides’ the just transition"
https://www.nationalobserver.com/2021/10/15/opinion/dont-bothsides-just-...
*
On the day the latest IPCC report came out, Wilkinson "reaffirmed Canada's commitment to phasing out fossil fuels and achieving net zero carbon emissions by 2050, but said achieving that target will require money generated by fossil fuels."
"Ottawa says it needs revenue generated by the Trans Mountain pipeline to fight climate change" (CBC, 9-Aug-21)
https://www.cbc.ca/news/politics/wilkinson-climate-report-1.6135502
New pipelines to fight climate change. Anyone who can't see the problem with that, raise your hand.
*
Wilkinson: "[orphan well cleanup and the wage subsidy that was provided during the COVID pandemic] aren't fossil fuel subsidies."
"Jonathan Wilkinson says Liberals are the best hope for a net-zero future" (National Observer, Sept 9th 2021)
https://www.nationalobserver.com/2021/09/09/news/jonathan-wilkinson-says...

Words, words and more words.... remember this is the Trudeau government.

A cabinet shuffle. That's nice. Call me when the new cabinet members, you know, DO something.

Fool me once, shame on you.

Fool me once, shame on you. Fool me twice, shame on me. This is the third go round for Trudeau. Pardon me while I wait this one out for a while to see what they actually do.

I heard Wilkinson this

I heard Wilkinson this evening (the As It Happens talk fest on CBC), sounding every bit the government point man he is happy to be. Throwing out all the talking points about the pride Liberals share over their record on legislation to date to combat climate change.... farcical. Wilkinson won't go to the wall over climate change, only to prop up his own political profile. And Guilbeault showed his hand when he ran for the Liberals rather than the Greens or the NDP. The Liberals are about perception first, they are disingenuous posers. Their next priority is maintaining cashflows to their war-chest, and then the economy comes third. The environment ( and planetary climate disintegration ) only rates as a priority marginally, ... because of public pressure, but the PR guys want us all to believe this is job one.