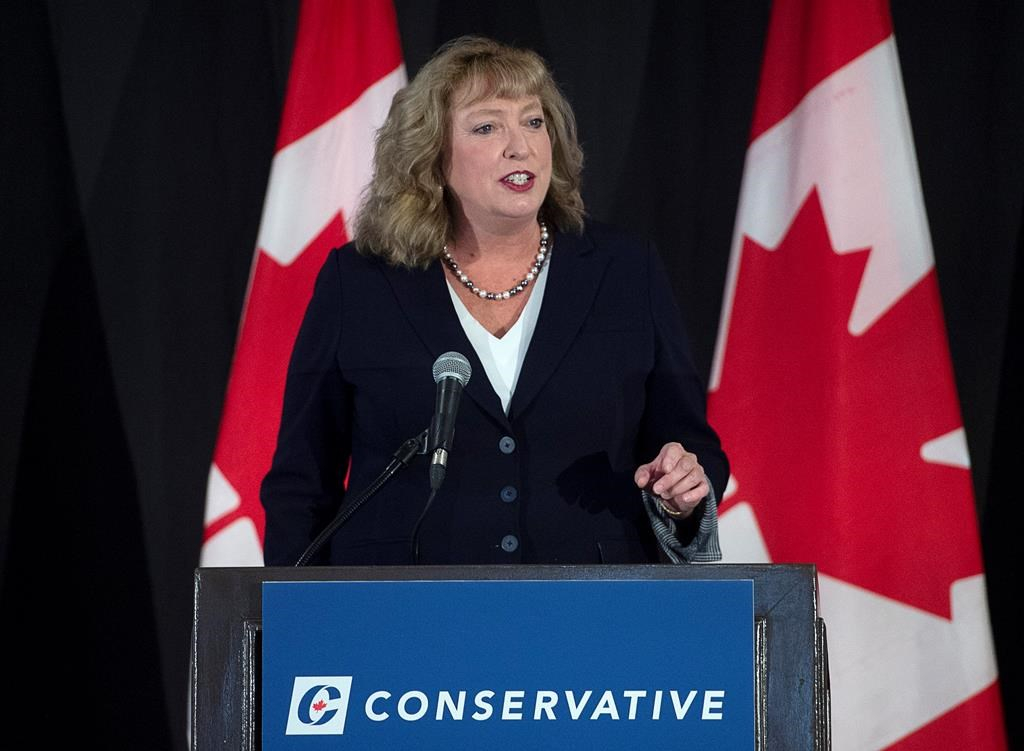 Marilyn Gladu addresses the crowd at a federal Conservative leadership forum during the annual general meeting of the Nova Scotia Progressive Conservative party in Halifax on Saturday, February 8, 2020. File photo by The Canadian Press/Andrew Vaughan
Previous story
Next story

Conservative MP Marilyn Gladu says she and other colleagues are forming what's shaping up to be a "mini-caucus" within the existing Tory caucus to advocate for Canadians concerned about the impacts of vaccine mandates.

She says the group is still sorting out logistics, but wants to make one thing clear: "This is not about Erin O'Toole's leadership. Has nothing to do with that."

"It's really hearing from our constituents and trying to figure out what we can do to bring those questions forward, get some answers, raise attention and awareness," Gladu said in an interview Thursday.

She estimated between 15 to 30 Conservatives, including senators, could join and imagines the group could function like a parliamentary committee, which would call legal or medical experts to speak at public meetings.

Another option would be a group Facebook page, she said, adding that some Conservatives are likely waiting to see if they will be asked by O'Toole to take on a critic role, and how much time they will have to devote to the matter.

"We have had a few meetings, and we're planning to keep meeting, but we haven't officially kicked off the caucus as a caucus. We've just been saying that that's sort of seeming what it is turning into," she said.

Gladu, who has represented the Ontario riding of Sarnia-Lambton since 2015, said the idea came about after she and some colleagues shared concerns they were hearing from constituents, decided to invite others and kept talking.

"Look, if people are losing their jobs right now, we really need to understand, you know, how can we get to a place where there's reasonable accommodation?" she said.

"Other places like Quebec and Ontario … in the U.S., we've seen where people are providing rapid testing as a reasonable accommodation for people and I think that that is something that should have been considered."

The provincial governments in both Quebec and Ontario recently decided against mandatory vaccination for health-care workers in hospitals, citing the potential for staffing shortages if people who are unwilling to get the jab are removed from the job.

Besides employment, Gladu said, there are concerns about unvaccinated people being unable to travel and worries from parents about immunizing their children.

She said what format the mini-caucus will take depends on what resources they find available.

Despite emphasizing that their group isn't about O'Toole,there's a good chance it could create challenges for him as leader,given his recent federal election loss and internal divisions over what to do about vaccine mandates, including for MPs.

Former Conservative cabinet minister James Moore tweeted his opposition Thursday to the mini-caucus idea, which could shine an even brighter light on the issue for the party, at the expense of more pressing ones.

"Cost of living? National economic unity? Post COVID growth & pandemic recovery? Housing crisis? No no. Be a voice for those who reject consensus medical science and block getting past COVID and saving lives. This is not where Canadian public interest/opinion rests. Stop this," he said on Twitter.

O'Toole has been trying to straddle the divide between those who support mandatory vaccination and those who don't.

Last week, following a four-hour caucus meeting, he announced that Conservative MPs will abide by a decision of the governing body of the House of Commons requiring anyone entering the Commons precinct to be fully vaccinated. But he said the party will also challenge that decision once the House resumes on Nov. 22.

"I think that the communication has had to be clarified multiple times," Gladu said of the Conservatives' handling of the issue.

The Conservatives are the only federal party that has refused to disclose the vaccination status of its elected members. All the others say their MPs are fully vaccinated, save for one Liberal MP who has a medical exemption.

Earlier in the week, the president of the National Citizens Coalition, a group that promotes "conservative" values, like freedom and less government, said the vaccine issue had become a distraction for the Conservatives.

That was echoed before last week's caucus meeting by Alberta MP Ron Liepert who said as the official Opposition, Conservatives don't have the luxury of arguing over whether people are vaccinated.

Former prime minister Brian Mulroney, who appeared on stage with O'Toole during the recent federal election campaign, suggested in an interview Sunday with CTV News that O'Toole should order all his MPs to get vaccinated and throw those who refuse out of caucus.

The most recent analysis by The Canadian Press shows at least 82 out of 119 Conservative MPs say they are fully vaccinated against COVID-19, with a handful of others saying they won't disclose such information because it's private and two saying they can't be vaccinated for medical reasons. The rest simply didn't respond when asked directly.

Among those choosing to keep their vaccination status quiet is rookie Ontario MP and former leadership contender Leslyn Lewis, who has posted on social media that vaccinating kids against COVID-19 "neither prevents transmitting or getting the virus," even though health experts overwhelmingly say the shots prevent serious illness and death.

The issue became problematic for O'Toole at the outset of the recent federal election campaign and he wasn't able to shake it over the course of the 36-day race, which ended Sept. 20 with a re-elected Liberal minority government.

Faced with the announcement from Prime Minister Justin Trudeau on the eve of his election call that he would bring in a mandate requiring all air and train travellers, federal public servants and workers in its regulated industries to be double-vaccinated against COVID-19, O'Toole decided to oppose it.

Although fully vaccinated himself and personally supportive of immunization, O'Toole argued that taking the shot is ultimately a personal decision and those who aren't vaccinated should have the option to take daily rapid tests.

Conservative Leader Erin O'Toole at odds with his party's base