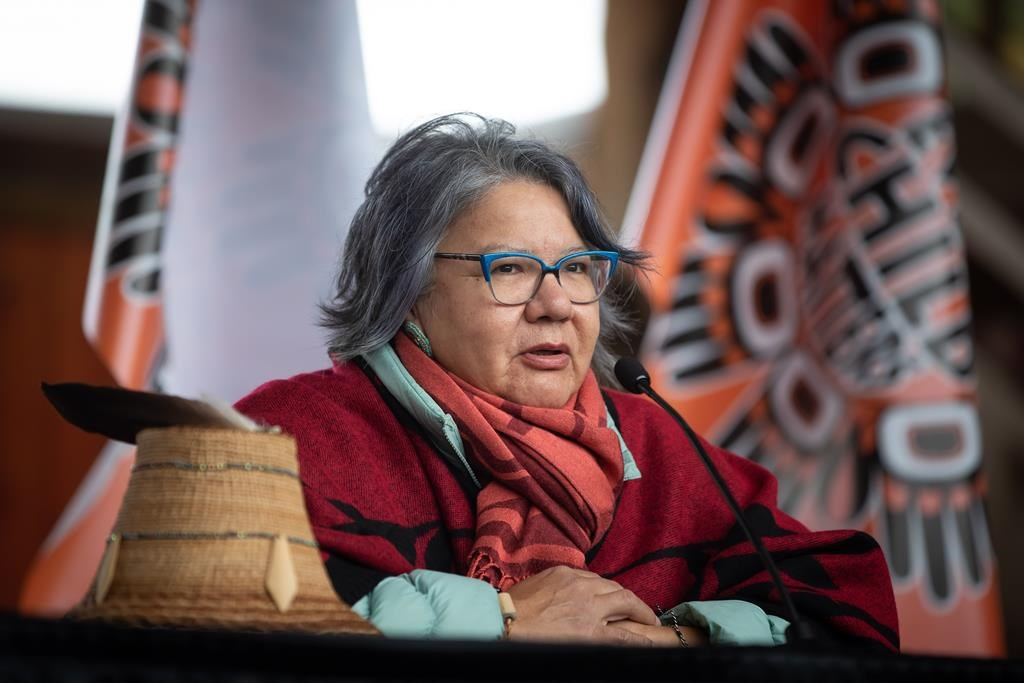 Assembly of First Nations National Chief RoseAnne Archibald speaks during a news conference in Kamloops, BC., on Thursday, September 30, 2021. File photo by The Canadian Press/Darryl Dyck
Previous story
Next story

Indigenous leaders and residential school survivors will not travel to the Vatican as planned this month to meet with Pope Francis because of the latest threat posed by the COVID-19 pandemic.

Archbishop Richard Smith, who was part of the planning committee for the Canadian Conference of Catholic Bishops, said it was “disappointing but prudent" to put the trip on hold until 2022.

Smith said the decision to postpone was made in collaboration with the national organizations representing First Nations, Inuit and Métis people. Delegates were originally to travel to Rome from Dec. 14 to 21.

Organizers had been watching the spread of the Omicron variant closely. It was first detected in late November and has since prompted countries including Canada to tighten border controls.

"The decision to postpone was a heartbreaking one," the Indigenous groups and Canadian Catholic bishops said in a joint statement on Tuesday afternoon.

They cited how the "uncertainty and potential health risks surrounding international travel" were too great, particularly for the elders who would have travelled, as well as for those who live in remote communities.

"Our shared commitment to walking together towards healing and reconciliation remains strong," their statement read.

Smith said it would not be replaced with a virtual delegation because it is important to meet face to face with Pope Francis to discuss reconciliation.

Metis National Council president Cassidy Caron said they remain committed to bringing an Indigenous voice to the Vatican. But, she said, "with the Omicron variant rapidly making its way across the world, we are choosing to do our part to prevent its spread and keep our people safe.”

News that the upcoming travel may have been off was made earlier in the day by Assembly of First Nations National Chief RoseAnne Archibald, who pointed to fears about the Omicron variant.

"The health and well-being of our delegates, their families and communities is paramount to us and we will not put anyone in harm's way if we can help it," Archibaldtold a virtual meeting of chiefs.

The Catholic bishops announced in June that national Indigenous organizations would send a delegation to meet with Pope Francis in hopes of seeing him one day travel to Canada to deliver an apology for the role the Catholic Church played in operating the residential school system.

In October, Pope Francis expressed his willingness to come to Canada at an undetermined date.

Smith said it is too early to say whether the pandemic or the delayed Indigenous delegation to the Vatican has impacted those travel plans.

"We know that he wants to come," Smith said in Edmonton. "But when he might be able to do that is so up in the air. We are taking this a step at a time."

Survivors and their families have long sought a papal apology for the abuses committed against Indigenous children forced to attend the federally funded, church-run residential schools.

At least 150,000 Indigenous children were made to attend residential schools, where thousands testified to experiencing physical and sexual abuse, as well as neglect and malnutrition.

The 2015 final report from the Truth and Reconciliation Commission of Canada, which investigated what happened at these institutions, listed a papal apology as one of its 94 calls to action, but it has sat unfulfilled.

A push for the Pope to apologize has re-emerged this year, given the finding of what are believed to be hundreds of unmarked graves at the former sites of residential schools in British Columbia and Saskatchewan.

Crown-Indigenous Relations Minister Marc Miller called the postponement disappointing, but said the safety of the participants is the "No. 1 priority."

He said the opportunity to speak with the Pope will still happen.

“Obviously, it's unfortunate because I think the Holy Father needs to hear from advocates directly and that occasion won't present itself until later,” he said.

Miller said the trip was not being organized or led by the federal government but Ottawa is providing some supports to the delegation, and that will continue.

In her address to AFN chiefs Tuesday, Archibald said they have called on the Catholic Church to make different reparations, including returning diocese lands and properties back to First Nations on which they are situated.

She also believes the church needs to provide more money for long-term healing initiatives that exceed the $30 million the bishops' conference promised it would fundraise earlier in the fall.

Archibald says she has also asked that the Pope revoke a 1493 doctrine of discovery, which aimed to justify European explorers' claims on land, and replace it with a decree that "Indigenous Peoples and cultures are valuable, worthy and must be treated with dignity and respect."

This report by The Canadian Press was first published Dec. 7, 2021.