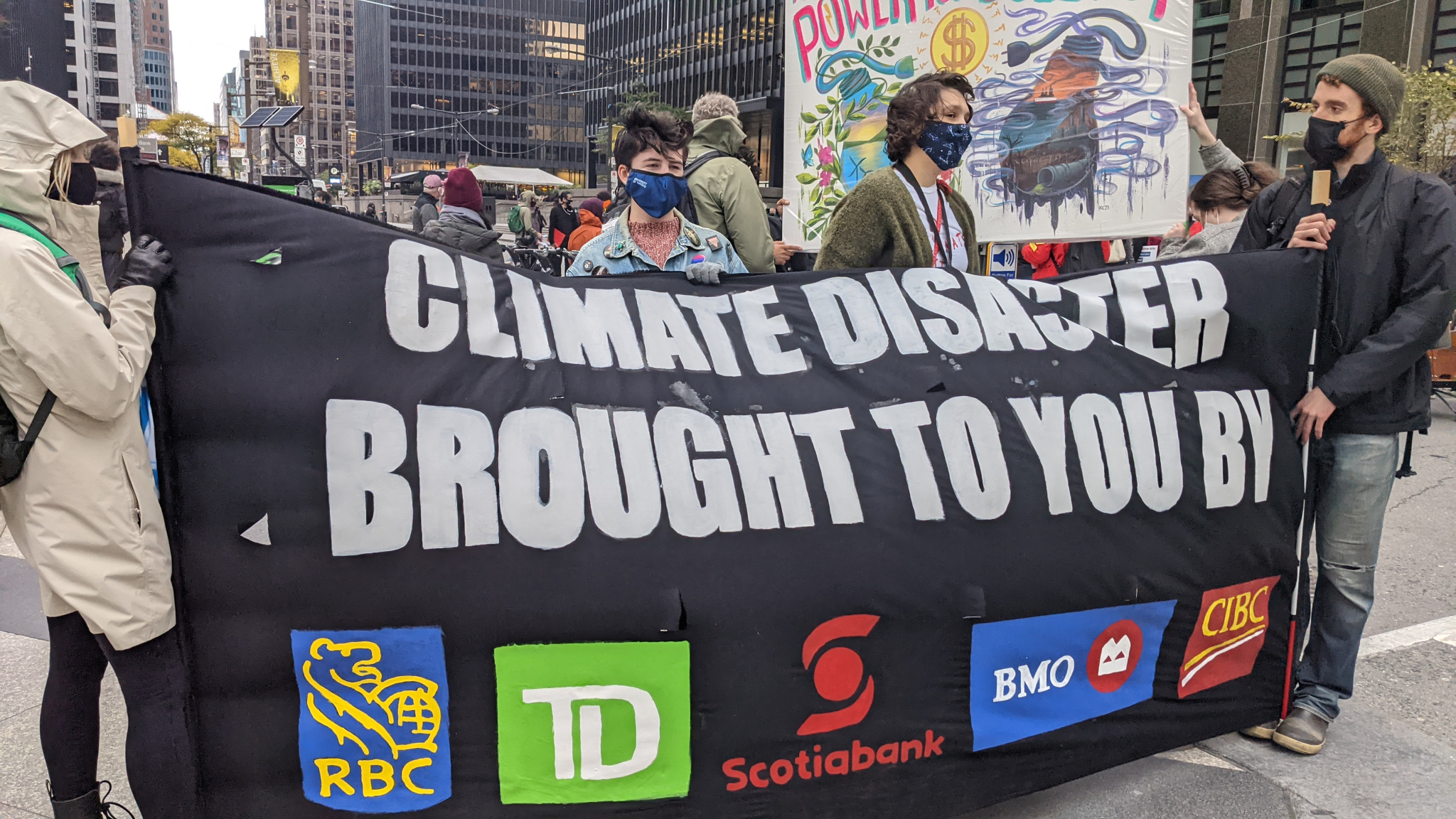 Amidst the ongoing COVID-19 pandemic, this past year’s impacts of intensifying climate change from floods to fires have hit Canadians hard, costing our health-care system billions, demolishing infrastructure and roads, and immeasurably impacting communities’ lives, livelihoods, and traditions.

In the face of this climate emergency, we are seeing hopeful developments in growing public awareness of who’s responsible, including the role of the financial sector. While Bay Street and Wall Street remain a hotbed of problems (more on that in a moment), this year we marked a massive milestone, noting a decade of progress for the fossil fuel divestment movement with 1,500 institutions representing nearly US$40 trillion in assets committing to no longer invest in coal, oil, and gas companies causing climate destruction. And just this month, Laurentian Bank, Canada’s seventh-largest bank, announced its commitment to end fossil fuel finance.

Yet as our society transitions off fossil fuels and institutions take action to clean up their pools of money, too many banks, insurance companies, and institutional investors like pension funds continue to be great enablers of climate change. Canada’s pension funds have been doubling down on carbon-intensive portfolios, investing in toxic fossil fuel infrastructure, and even have board members with controversial ties to the oil and gas industry.

Our big banks are no better. As the fifth-worst offender in the world, RBC has financed more than $200 billion in fossil fuels since the Paris Agreement was signed, including in the Coastal GasLink pipeline. The real-world impacts and conflicts these investments generate are being exposed right now as Coastal GasLink violates Indigenous rights in Wet’suwet’en land, including militarized police raids in B.C, and faces million-dollar fines for repeated environmental infractions.

In a quickly warming world, most Canadian banks and pension funds risk being laggard outliers. With occupations and dozens of arrests at RBC branches across Canada in solidarity with land and water defenders, pressure is escalating on Canadian banks to stop the money pipeline to fossil energy companies.

February: BMO kicks off the year with a faux green announcement by becoming a fairly toothless Principle for Responsible Banking Signatory. Not to be outdone, RBC counters with an announcement of $500 billion in “sustainable investments” — while continuing to finance fossil fuels.

April: A climate shareholder resolution at RBC garners 31 per cent support, laying the groundwork for a 2022 resolution to stop fossil fuel expansion and affirming shareholders are paying close attention and concerned with management.

October: The Invest/Divest 2021 report marks a decade of progress for the global fossil fuel divestment movement; Canada’s largest university, the University of Toronto, committed to divest its $4-billion endowment, rippling throughout the fossil fuel and banking sectors; hundreds of communities around the world took action to #DefundClimateChaos at banks, insurance, and financial institutions around the world; big pension fund ABP (with over $600 billion in assets) announces divestment impacting more Canadian oil and gas companies.

November: The Glasgow Financial Alliance for Net Zero (GFANZ) launched with hope in the spring, but by COP26, banks were using it as a greenwashing cover rather than a space to address the inevitable end to fossil finance and investments in climate solutions.

December: Bloomberg reporting reveals all major Canadian banks signed a slew of loan and bond deals with fossil fuel companies in 2021, despite net-zero rhetoric. In contrast, Laurentian Bank announces its commitment to end fossil fuel finance, differentiating itself from the other big banks.

As climate impacts intensify, Canadian banks remain fossil fuel companies’ go-to lenders. Much ballyhooed net-zero rhetoric, joining alliances like Mark Carney’s GFANZ are wearing thin, and people are clueing in on the role these banks play. The banks have played a role in holding back more effective climate action in Canada and bankrolling extreme weather events that grabbed headlines and affected millions this past year.

In 2022, we’ll see more customers, shareholders and politicians questioning the role of finance, and taking actions from moving money and voting their shares or exploring regulatory actions, to demanding accountability and meaningful action from Canada’s biggest banks and pension funds. The crystal ball remains unclear how our financial institutions will respond: with real transparent action or more deflection and defensiveness. Time’s running out, I hope they chose the former.

Richard Brooks is the climate finance director with Stand.earth.

Pension funds need credible plans to back their net-zero commitments

take your mortgage to a

take your mortgage to a credit union and tell the bank why you are doing so .. they only care about money

If your going to stay with a

If your going to stay with a bank, it sounds like the Laurentian Bank is the one to move your mortgage money to.
Could an article on the « Environmentally conscious » ranking of Canada’s Credit Unions alternatives be provided?