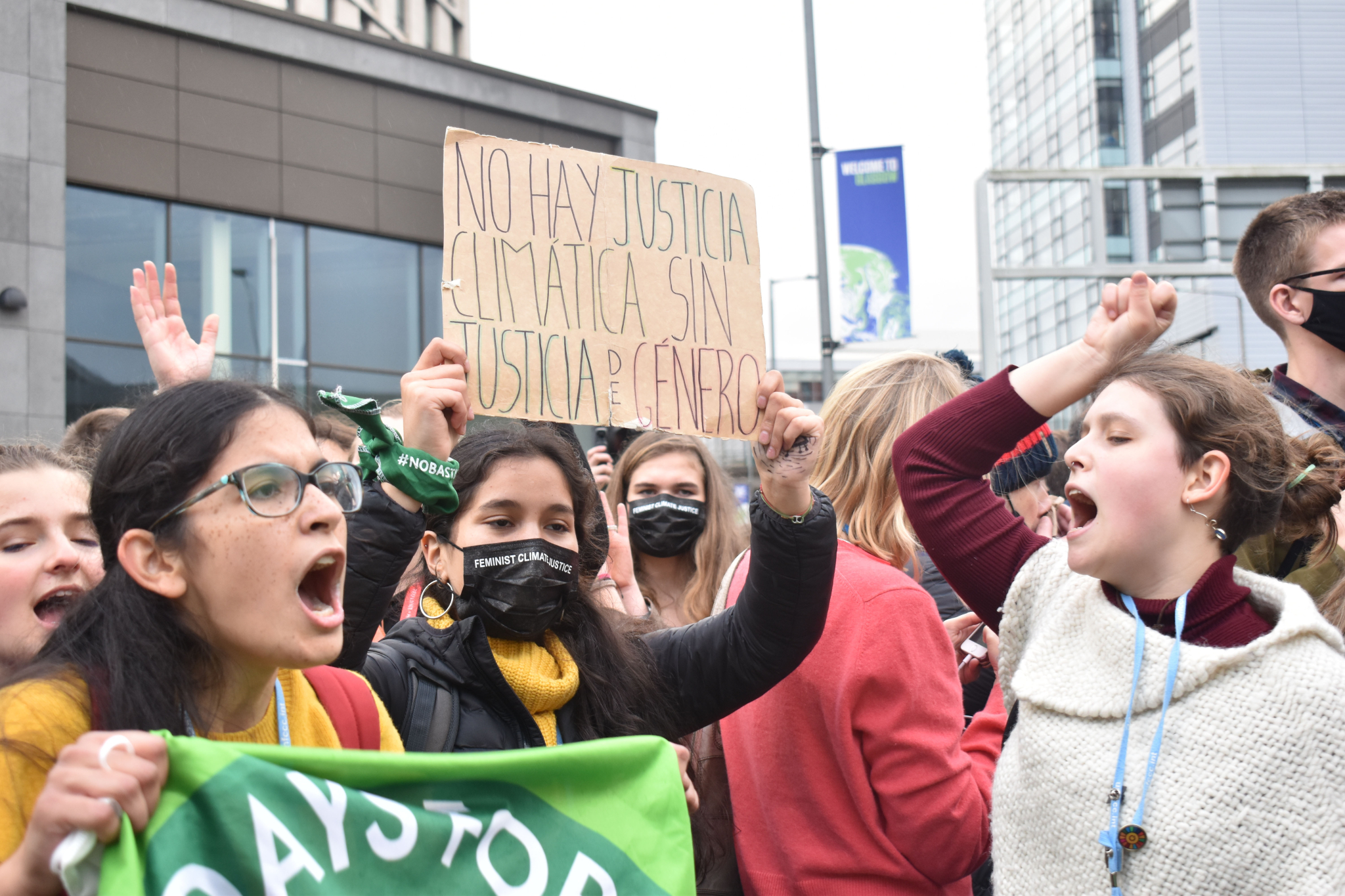 Activists march in front of the gates of COP26 on the last day of the climate summit. The unifying theme of the conference was disconnect, writes Eddy Pérez. Photo by Nora Legrand
Previous story

Fires, floods, and the existential dread of the latest “code red” IPCC report: it’s been a tough year. That’s on top of the pandemic that brought us to our knees, vaccine hoarding, deepening inequities and debt distress, and rising geopolitical tensions.

With nearly 40,000 people allowed at the COP26 venue for the largest climate summit in history, last month’s UN Climate Conference in Glasgow should have been the moment for transformational climate action. Yet the unifying theme of COP26 was: disconnect.

Negotiators and observers moved in separate spheres, with Indigenous peoples and civil society restricted from decision-making spaces, while fossil fuel lobbyists outnumbered any country’s delegation. The start of the conference was dominated by heads of states announcing a series of pledges outside the COP process.

People from vulnerable countries testified to the destruction of their lands, livelihoods and communities, while rich countries refused to recognize their own responsibility or commit new funding. Vast gaps remained between goals and commitments and between intentions and accountability. Amid escalating calls for transformative change, incrementalism prevailed.

The COP26 outcome fell far short. But it did still manage to make progress on some key issues — which Egypt, the COP27 host, can build upon.

The final Glasgow Climate Pact ended up being a mix of breakthroughs and disappointments. There were some notable firsts: the pact called on countries to phase down coal and “inefficient” fossil fuel subsidies. This is the closest the COP process has come yet to tackling the elephant in the room: phasing out fossil fuels. But the final text didn’t go far enough and avoided mentioning the need to phase out gas or oil.

The pact also called for a collective goal to adapt to the impacts of the climate crisis. And, in recognition of the insufficiency of existing climate pledges (Nationally Determined Contributions, or NDCs), the pact asks countries to enhance their NDCs in 2022 in line with the Paris Agreement goal of limiting global warming to 1.5 C above pre-industrial levels. But days after COP26 ended, high-emitting countries like Australia and Canada were already signalling they wouldn’t revisit their pledges.

For rich countries, the barrier to greater ambition might be inertia and industry pressure, but for developing nations, it’s a lack of resources and inequity. The issue that came up in almost every single negotiation room was the financial support needed by vulnerable countries to put the world on a 1.5 C-compatible pathway. But COP26 didn’t properly address the ongoing inadequacy of financial flows and broken climate finance governance, even after Canada and Germany released their plan to deliver the annual US$100 billion developed countries promised in climate finance.

COP26 opened the door for a real conversation on phasing out fossil fuels, and this should take centre stage in Egypt next year, writes Eddy Pérez @Eddypc. #NetZero #cdnpoli

Vulnerable countries hoped this COP would create a new climate finance bucket to address climate-induced losses and damages, and Scotland kicked off the summit by promising €1 million for loss and damages (a commitment it doubled later in the summit). Despite this promising start, the Glasgow pact offered only a dialogue to explore the possibility of funding for losses and damage in the next two years.

The last piece of the Paris rulebook

After four years, negotiations on Article 6 rules governing carbon markets came to an end in Glasgow. Governments reached a compromise that closed some loopholes, but the risk remains that countries and companies will use carbon credits as an easy way to continue polluting, and there aren’t enough safeguards yet to respect the rights of Indigenous peoples and protect the land.

COP26 also saw the creation of some new climate clubs to tackle issues that the traditional process has not been able to address. A small group of first movers launched the Beyond Oil & Gas Alliance — which the province of Quebec has joined — pledging to end production and extraction of fossil fuels. Groups of countries made new pledges on reducing methane emissions, stopping international public fossil fuel finance, ending coal, and reducing deforestation, among others.

Mark Carney launched the Glasgow Financial Alliance for Net Zero to move the financial sector to contribute to achieving Paris goals. But since these pledges fall outside the formal COP process, this also generated increasing concern about the lack of clear accountability and transparency for follow-through.

COP27 in Egypt will present a moment for people and communities to hold governments accountable for what they promised in Glasgow.

That means there’s a lot of work for Canada in the year ahead — which should start with recognizing that our current Paris commitments aren’t in line with a 1.5 C pathway, or with our historical responsibility for the climate crisis, and revising it ahead of COP27.

The federal government also has some rapidly approaching deadlines to meet: Canada will need to deliver on its promise to quickly end all fossil fuel subsidies, including international public finance, by the end of 2022. But the need for transition goes beyond subsidies: COP26 opened the door for a real conversation on phasing out fossil fuels, and this should take centre stage in Egypt next year.

The importance of funding for adaptation and for loss and damage also gained significant traction in Glasgow, and COP27 must build on this. Canada will need to clarify the details of its commitment to double adaptation finance and should be ready to mobilize funding to tackle loss and damage.

Glasgow has shown that relying on the COP process alone will not address incrementalism and climate injustice.

Canada came to Glasgow with an enhanced NDC; a pledge to double its climate finance; a net-zero accountability law; a carbon pricing mechanism; and the ability to sign on to the global methane pledge and promise to eliminate fossil fuel subsidies. The pace of change still lags behind the urgency of the crisis. But this progress would not have been won without increasing mobilization at the domestic level.

In Canada and around the world, people are marching, organizing, and voting for the climate in greater numbers than ever. As we enter the new year, we’re looking ahead to the future we want.

It’s time for our governments to catch up.

When the world came together for COP26, it was a beautiful moment