Adapting to climate change and disaster response key to resilience 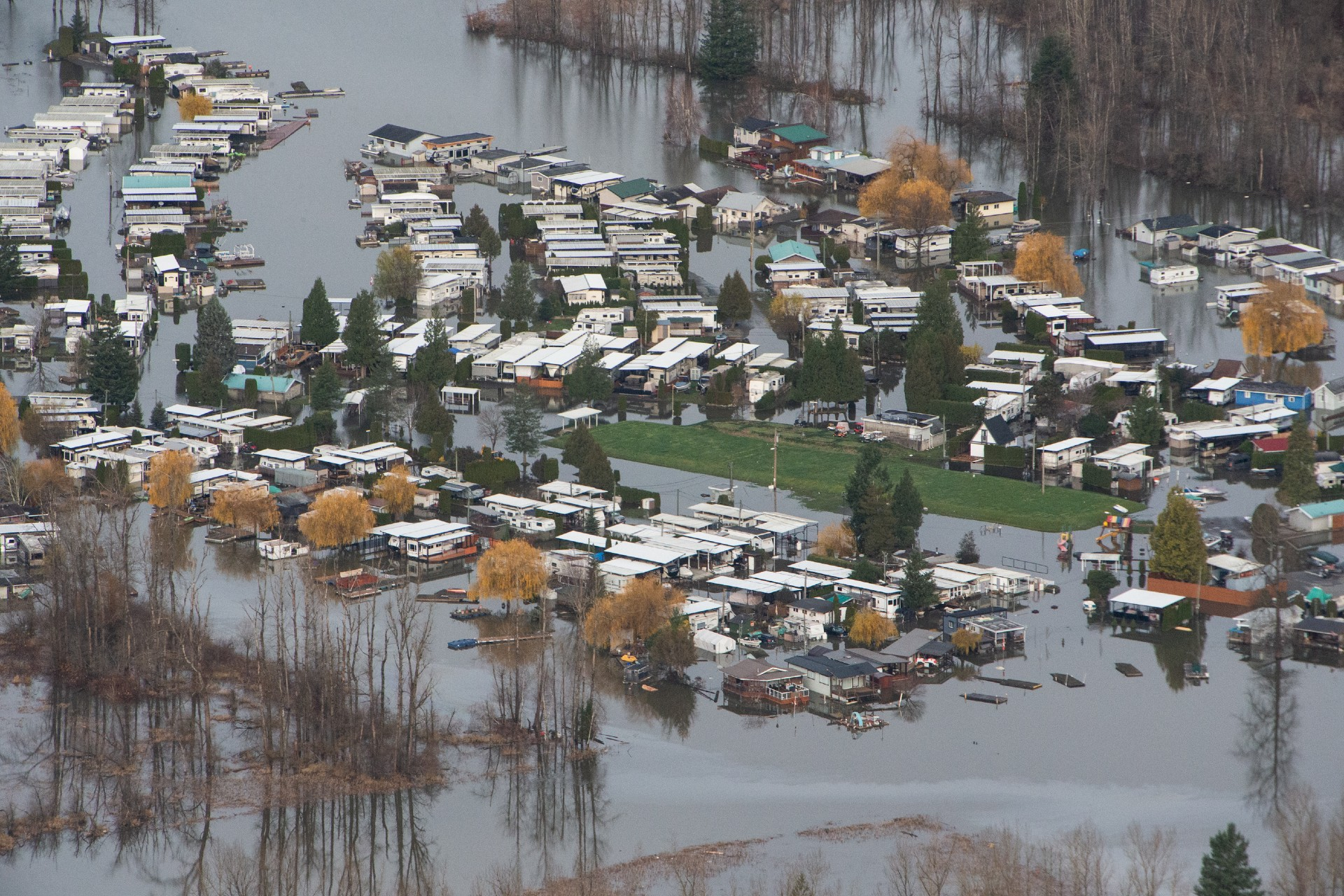 An increase in the severity and frequency of climate-related disasters is inevitable — and already a reality — and a new report says to weather the storm, adaptation and disaster responses need to be integrated. Photo by Jesse Winter
Previous story
Next story

Faced with an almost guaranteed increase in climate-related disasters, Canada could improve its resilience by combining efforts to adapt to climate change with its approach to emergency response, according to a new report by the Council of Canadian Academies.

Released Thursday, the 196-page report examines how governments, communities and individuals can improve our resilience to climate-related disasters both immediately and in the future.

Destructive events like the recent floods in B.C. — which caused one death and multiple evacuations and came with a hefty price tag of $7.5 billion for infrastructure damage alone — underscore the impact of climate-related disasters on Canadians.

“What used to be one-in-100 year events, sort of viewed as being anomalies or things that will never happen, are now becoming more of a pattern,” says Scott Vaughan, chair of the expert panel on Disaster Resilience in a Changing Climate, which produced the report.

Because climate adaptation and disaster risk reduction are co-ordinated by different departments, funding programs are unlikely to complement one another and can result in lost opportunities for disaster response programs to help facilitate long-term adaptation, according to the report.

The immediate nature of disaster preparedness and response — things like providing food, water and medical care to communities hit by emergencies like floods and wildfires — also means these areas tend to be better funded than adaptation, which is often a longer-term project. Planting fire-resistant tree species, prioritizing urban greening or updating building codes to account for excessive heat or rain are all examples of climate adaptation.

Integrating disaster responses and climate adaptation efforts is key to weathering the increase in frequency and severity of climate-related disasters, says a new report from @cca_reports. #ClimateChange #floods #wildfire #cdnpoli

For example, in 2002, New Brunswick was able to prevent development on floodplains by declaring wetlands protected spaces. These coastal marshes also provide protection from storm surges and flooding, reduce erosion, and enhance biodiversity.

“This is the time now to integrate these two different areas in order to get greater program efficiencies and delivery in a way which people across Canada can … access, understand, and then make choices they need to build resilience,” says Vaughan.

Providing governments, communities and individuals with accurate, accessible information is another key to increasing resilience, and data collection can be improved at both a federal and local level, Vaughan says.

This criteria may exclude sparsely populated communities, particularly Indigenous communities, from having a hazard classified as an official disaster. The report’s analysis of wildfire evacuation data from Statistics Canada and the Canadian Forest Service from 1980 to 2020 reveals that roughly 30 per cent of evacuees were from First Nations, despite representing less than three per cent of Canada’s population.

CDD data is also collected from a variety of sources, resulting in data with varying degrees of reliability. Cost and loss data are not reported and take years to finalize, and the CDD lacks community-level information, the report notes.

However, the report says if these limitations are resolved, the CDD could be a valuable asset for integrating adaptation and disaster risk reduction.

Similarly, Canada’s national All-Hazards Risk Assessment could be a valuable tool for improving climate resilience, but its contents, which contain “emergency management plans for all identified risks,” are not available to the public.

Both these resources could help communities trying to plan for a future of increasingly frequent climate-related disasters, but there is also a need for data collection at the community level, the report emphasizes.

This may look different than large databases but is no less valuable, Vaughan says.

Using apps so citizens can submit photos and provide real-time updates on risks is one example of community data collection. The City of Vancouver’s VanConnect app provides residents with up-to-date news and emergency information and allows people to report non-emergency flooding by uploading a photo, description of the issue and their GPS co-ordinates.

“The best decisions on understanding vulnerability and then building resilience are at the local level,” says Vaughan.

Communities can prepare for and minimize wildfires with solutions like fuel management plans, urban greening to reduce temperatures where people live, planting fire-resistant tree species or creating living firebreaks of greenery, but how these different solutions should be applied varies depending on the community.

For this reason, the report emphasizes that local governments and Indigenous communities are best placed to identify local vulnerabilities and create integrated disaster response and adaptation plans. Federal and provincial governments could support them by providing financing, knowledge, data, and regional co-ordination, it adds.

The Nova Scotia government, for example, successfully supported municipalities in this way by requiring them to have an adaptation plan in place by 2014 to be eligible for federal gas tax funding. The province provided municipalities with workshops, webinars, participatory adaptation research projects, and baseline scientific information to serve as a starting point for plans.

“That Nova Scotia model has now been written up as an example that other countries have been looking at … as a way where you can actually empower local communities to be able to sort of figure out what their adaptation plans are at … a very highly localized level,” says Vaughan.

In the case of Xwisten First Nation in B.C., enhanced food production, revitalized cultural practices, and wildfire risk reduction were all positive outcomes of working with the First Nations Emergency Service Society to create a fire management plan that included cultural burning practices.

The practices and knowledge of Indigenous communities should serve as invaluable models to help integrate efforts to reduce disaster risk and adapt to climate change, but Vaughan says to date, there is “very little incorporation or integration.”

“This should be an opportunity to look at Indigenous and local knowledge as distinct expertise and traditional knowledge around ways to reduce risk, particularly on issues around those affected land by management.”

Government-funded recovery programs and insurance programs are not necessarily aligned with improving adaptability, the report finds.

“With the insurance sector … when you put in a claim, you look for money in order to rebuild, usually the same structure in the same location,” says Vaughan. “This is an opportunity in those recovery programs to embed different types of resilience from building design to moving away from high-risk areas.”

Flood maps and insurance are notoriously complex issues, with homeowners fearing up-to-date maps will devalue their properties or being unaware their homes are on floodplains altogether. Some municipalities also rely on increased development for revenue, and a government task force is currently deliberating options for residential flood insurance and relocation. But the way forward needs to marry climate adaptation with risk reduction.

“Ottawa has now promised a federal climate adaptation strategy this year. And so this really is a moment to be able to say, ‘Let's see if we can get as many of the ducks in the row as we can, in order to get magnifying synergies across these different areas of government and different programs,’” says Vaughan.

Thank you for this article. Yes, we need to plan and prepare for climate change adaptation and disaster response, while at the same time continue efforts to reduce GHG emissions. And the cost will be phenomenal. Where will the money come from?

As a resident of BC, I'd like to point out that the damage was not only from flooding but also from landslides/ mudslides. I have read that the Coquihalla Highway 5 between Hope and Merritt was washed out in 20 places (!) and that Highway 1 (Trans Canada) through the Fraser Canyon was also damaged in about 20 locations. This is MASSIVE damage and it's hard to comprehend. The Coquihalla has been temporarily repaired (for transport trucks and buses only) and we are still waiting for repairs to Highway 1. News stories indicate that the Federal and Provincial governments have been meeting regarding how to rebuild the permanent infrastructure on these highways so that it can withstand future climate impacts. The costs will be enormous.

By the way, the death toll from last November's events was at least 6. Five people died in the landslide on Highway 99 between Pemberton and Lillooet.

And over half a million non

And over half a million non-human animals died in those floods. I feel we should keep them in mind, too, as we discuss this.

The points made in this article are cogent, and it will be a helpful resource/reference. But these ideas should have been implemented decades ago, and even now are not being implemented with any sense of urgency (that the public can pick up on). Indeed, the cognitive dissonance for the public ("I'm sort of hearing that climate disruption is an emergency; I keep seeing my elected officials do worse than nothing about it") is deafening. "Climate change tinnitus," I'll call it. If we don't get off our collective butts, it's going to be a lot harder to adapt to extinction. :-(