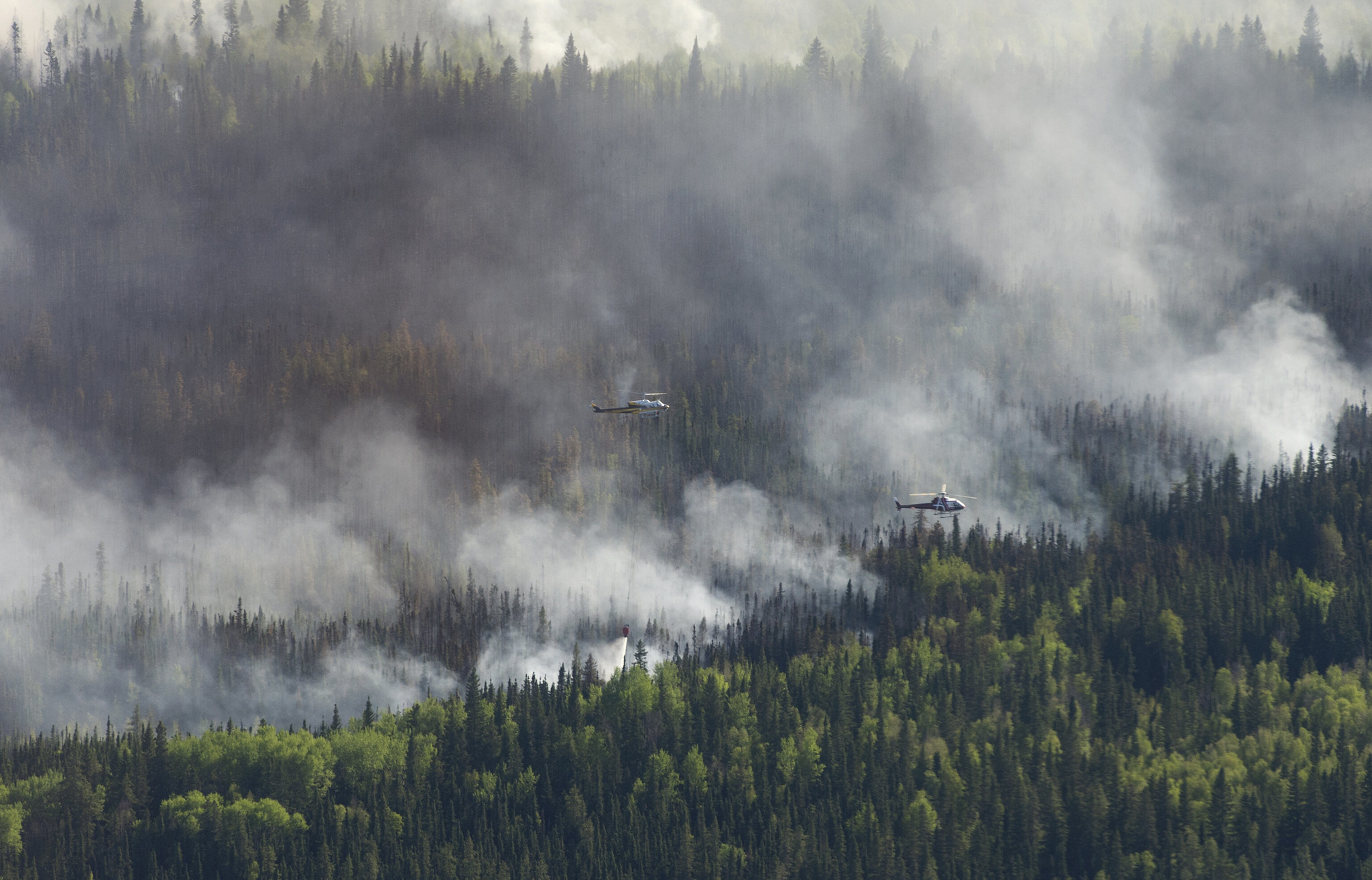 A helicopter drops a bucket of water on the Chuckegg Creek wildfire west of High Level, Alta., on May 25, 2019. Photo by Chris Schwarz / Government of Alberta / Flickr
Previous story
Next story

The health impacts of climate change are rising globally, according to a new study, but a Canada-specific policy brief lays out three key areas that could be game-changers when it comes to the way climate change affects human health in the country.

The policy brief was released alongside the annual Lancet Countdown study, which tracks key indicators of the impact of climate change on human health — including the relationship between health and extreme weather, economic impacts, adaptation planning, air pollution, food security, and more.

“These are tangible things that community stakeholders, local government, provincial, territorial, and federal governments can all directly translate into policy in ... the next one to three years,” said Dr. Finola Hackett, co-author of the Canada policy brief. “We don't have time to waste, and it will improve health in Canada.”

Hackett points to the heat dome that descended on British Columbia and parts of the Prairies this summer as an example of why Canada needs a national climate adaptation strategy.

As a family physician, she recounts seeing people in High River, Alta., with coughs and respiratory issues related to the horrible air quality and smoke, and said her colleagues in B.C. were faced with deaths and hospitalizations related to the extreme heat. The heat dome "would have been almost impossible without human-caused climate change" and was responsible for at least 570 deaths in Canada, the report notes.

“But what climate change does is it reaches across and integrates with all these existing issues, and it has the potential to make them worse (and more unpredictable) if we don't address it.”

Because of this, Hackett — and the policy brief — emphasizes the need for an integrated approach.

To address the intrinsic links between climate, health and countless other areas, from economics to social justice to Indigenous rights and the environment, the policy brief recommends the federal government establish a new national body with the authority to work between silos. That body would be tasked with developing a comprehensive national climate adaptation strategy that includes risk assessments and adaptation planning.

“Lots of municipal governments, local governments are recognizing the issues and trying their best,” said Hackett. “But what's noticeable is that there's a lack of co-ordination across sectors and across levels of government.”

In December, the federal government committed to developing Canada's first national adaptation strategy in its climate plan. In August, the government announced it would be launching adaptation advisory tables led by environmental organizations, adaptation experts, Indigenous people, and youth, among other partners from across the country, to create a framework for concrete adaptation action.

The most obvious recommendation is around fossil fuel subsidies: we need to eliminate them.

When public financing through Crown corporations is included, Canada’s federal government provides over US$14 billion in annual fossil fuel subsidies, according to a 2020 scorecard of Canada’s fossil fuel funding from the International Institute for Sustainable Development.

The Liberal Party’s 2021 election platform committed to eliminating fossil fuel subsidies by 2023, instead of 2025 as originally planned, and promised to “develop a plan to phase out public financing of the fossil fuel sector, including from Crown corporations, consistent with our commitment to reach net-zero emissions by 2050.”

Whether these promises come to fruition remains to be seen, but Hackett points to another, slightly different problem.

According to the policy brief, fossil fuel industries and associations met with federal government officials a total of 1,224 times, or an average of 4.5 meetings per day, in the first year of the COVID-19 pandemic.

Environmental groups, on the other hand, only met with federal officials 303 times.

“I'm not saying that industries shouldn't have a say — I think they should — but why is it so disproportionate compared to that of non-profit and other groups?” asked Hackett.

“What we really need is evidence-based decision-making,” she said. “We have evidence, we know what the impacts on health are if we continue to subsidize polluting industries and fail to take action on climate change and health.”

Correcting that imbalance in lobbying is one way Hackett says we can move towards those evidence-based decisions that will benefit Canadians and enable the shift towards a just transition away from fossil fuels.

People who live in areas with high levels of greenness experience an eight to 12 per cent reduction in their risk of death from all causes, according to a 2017 Lancet study on urban greenness and mortality in Canada's largest cities.

“Trees are the best, they're better than any pills that exist in the world,” says Dr. Claudel Pétrin-Desrosiers, co-author of the policy brief and president of the Quebec branch of the Canadian Association of Physicians for the Environment.

The ability of trees to reduce air pollution and cool down the surrounding area on hot days is invaluable, she said.

The Lancet’s data shows some large urban centres in Canada are increasing their area of natural spaces and tree cover, but despite these improvements, Pétrin-Desrosiers also says there are issues with how trees are distributed within cities.

Another issue to tackle is a lack of alignment between climate adaptation strategies and urban greenness, which essentially boils down to whether the right species of trees are being planted and where.

“If you don't take care of the trees that you plant, it's sort of a lost effort,” said Pétrin-Desrosiers.

To be effective, greening strategies must also account for the changing environment and fluctuations in humidity, rain, temperature, and more.

Just as addressing inequity needs to be part of initiatives like greening cities, centring people who are disproportionately affected by the health impacts of climate change needs to be a priority across all policies, Hackett says.

There is no Lancet data for environment and health issues related to Indigenous people in Canada. Hackett says we need to be mindful of what is not being measured, particularly when it comes to the health impacts of climate change on disproportionately affected groups like refugees, migrants, Indigenous people, and remote or rural communities.

“Part of the focus should also be on what are we missing,” she said. “We need to listen to those people who are being most affected and what sort of ways of thinking about knowledge and data are important to them, so we can truly understand how climate change is impacting health.”