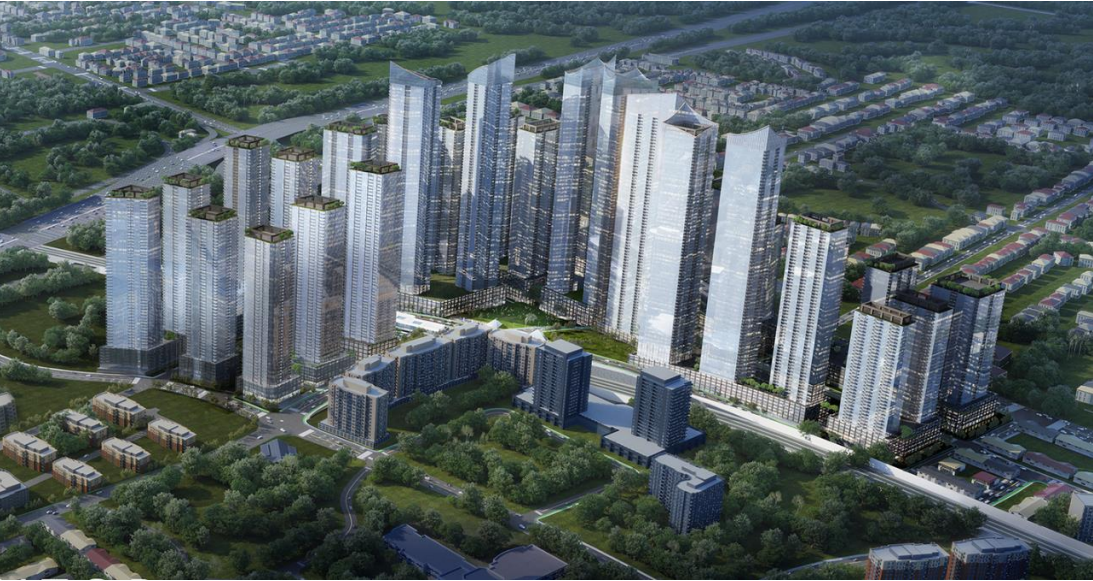 Planned developments in York region would create a neighbourhood among the densest in the world after the provincial government used zoning orders to override municipalities. Rendering from Engagehightech.ca
Previous story

The proposed communities would straddle Highway 407 at Yonge Street along a future subway extension that will run north into York region and bring 67 condo towers to what are now industrial areas, chain-store strip malls and parking lots.

While Ontario Premier Doug Ford touts transit-oriented communities as a means to address the province’s housing crisis and fund subway projects, some residents and municipalities in York region charge that the province is steamrolling local planning processes and concerns.

Housing promises to be a key issue in the June 2 election, as prices continue to surge, particularly in the region around Ontario’s largest city, where average rent for a one-bedroom apartment has soared to more than $2,000 per month and average house prices to $1.3 million.

“After decades of inaction by previous governments, our government is saying ‘yes’ to building housing and subways,” Ford was quoted in an announcement about the developments planned for York region. “Others will find any reason to say ‘no’ to delay desperately needed housing and transit with more studies, committees or reports. Instead, our government is keeping costs down for families by building more homes …”

To enact its plans quickly, the government has issued a slew of zoning orders that override municipalities, which typically make planning and development decisions. Prior to the Ford government, minister’s zoning orders (MZOs) were rarely used, averaging about once a year. Since its election in 2018, the Progressive Conservative government has issued dozens — 44 in a two-year period from 2019 to 2021 — and expanded its powers to control municipal developments.

Earlier this month, the province announced five MZOs to build transit-oriented communities in Toronto along the proposed Ontario Line.

And then, the night before the Easter long weekend, Municipal Affairs and Housing Minister Steve Clark signed off on two more “enhanced” MZOs for the developments in Markham and Richmond Hill despite vocal opposition from city councils and residents.

“This is unprecedented,” said Markham’s deputy mayor Don Hamilton. “This government is using [MZOs] like a regular everyday planning tool, throwing them out all over the place. We’re flabbergasted as a city that the province has come in with a big hammer, a big fist, and just taken over the planning process.”

The province’s plans are markedly different from those hammered out over the years by the Regional Municipality of York and the communities it encompasses. The orders more than double the proposed population for the area — already slated to become the densest neighbourhoods in York region — while reducing the number of jobs by almost a third to create what one veteran planner called “a vertical dormitory suburb.”

Freeman said municipal planning was underway for well over a decade to build high-density neighbourhoods on the sites along with commercial and economic space for a nearly equal number of jobs and create “complete communities” where people live and work.

The province’s plans call for only one job for every four people, raising concerns the neighbourhoods will be mostly residential and increase pressure on roadways and transit as people are forced to commute out for work. Once built, the area would have four times the density of the highly populated Yonge-Eglinton Centre in Toronto and towers that surpass in height any save the CN Tower.

“There are concerns about the amount of density proposed and livability of an area this dense,” said Freeman. Residents worry about a lack of parks, schools, community services and other amenities to accommodate the influx of people, he added. The development plans also don’t include any details on affordable housing.

A December 2021 report by the provincial auditor general criticized the “broad and frequent” use of MZOs, noting provincial interference to fast-track development disrupted normal planning processes for services like water and sewers. “Planning processes often take months or years to complete because they ensure that sufficient due diligence is conducted,” it noted. “MZOs were originally intended to be used only in special circumstances.”

Melissa Diakoumeas, spokesperson for the ministry of municipal affairs and housing, said in an email that a zoning order “only kick-starts the planning approvals process by getting the zoning in place.”

“Our government has had extensive discussions with the City of Markham, the City of Richmond Hill and York region, and public consultations before requesting these zoning orders,” Diakoumeas wrote.

Various municipalities have raised concerns that the increased use of MZOs sets dangerous precedents for future developments, as more and more developers request them to remove potential barriers.

“Every development is going to want 80-storey buildings,” said Hamilton. “There’s a lineup I think downtown for MZOs.”