Extreme heat is a disease for cities. Let’s treat it that way 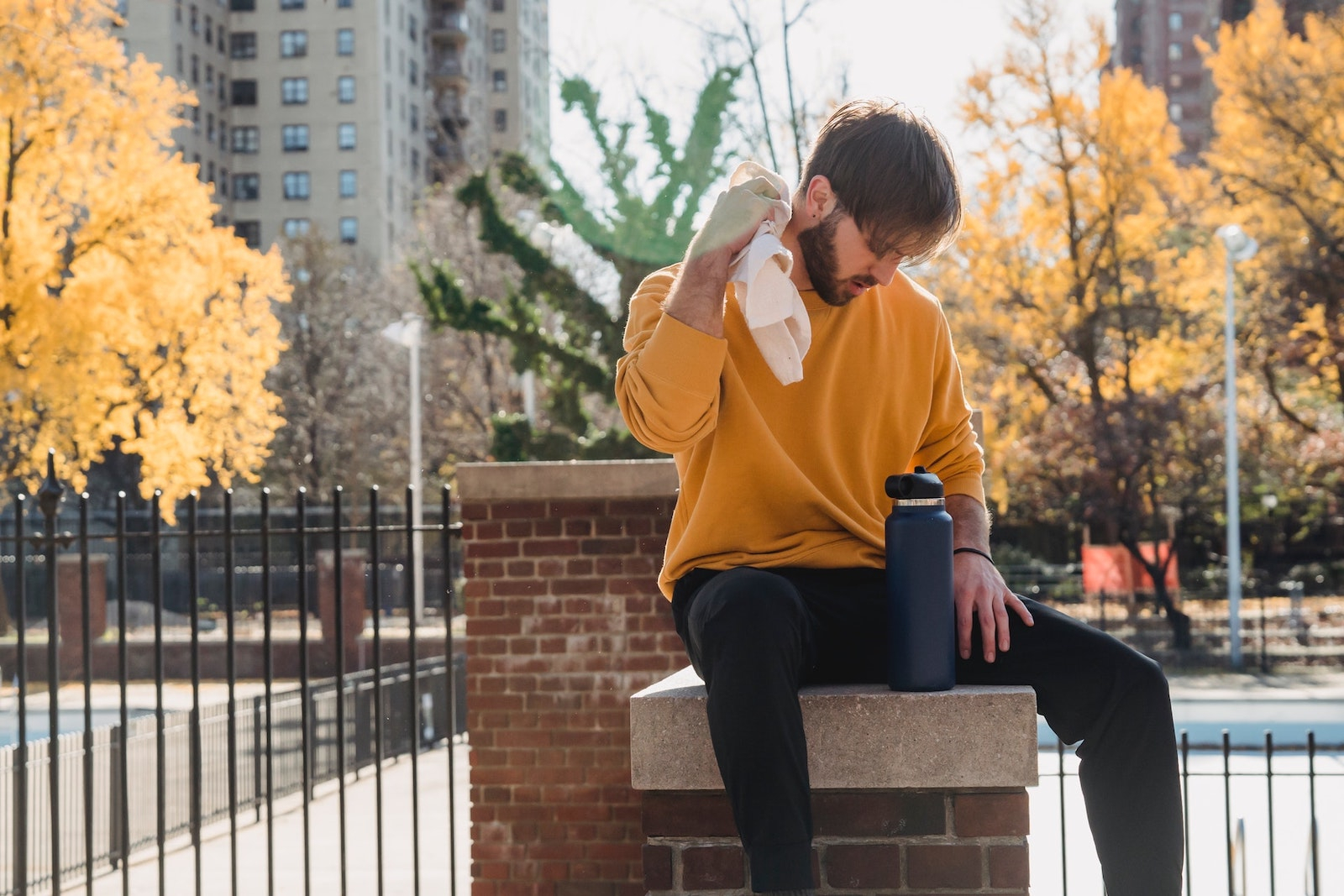 It’s critical to know how heat actually feels because people forced to be outside — construction workers, postal workers, the unhoused — are among those most at risk of heat illness and death. Photo by Mary Taylor/Pexels
Previous story

For millennia, cities have thrived by attracting people with diverse backgrounds and talents. But as the world warms, urban areas are attracting something less desirable: heat. A city’s roads, buildings, and other infrastructure absorb the sun’s energy, raising temperatures far above those in surrounding rural areas. This “urban heat island effect” varies dramatically not only from neighbourhood to neighbourhood, but from block to block and even house to house. Because it’s so hyperlocal and erratic, it’s hard to factor into predictions; a person’s actual experience of heat may be out of step with their local weather forecast. And with climate change, it’s increasingly difficult to keep vulnerable (and rapidly growing) populations safe during extreme heat events.

“I often talk about heat as the silent killer, and I say that because it doesn't get the headlines that tornadoes, flooding, and blizzards get,” says Jonathan Porter, chief meteorologist at AccuWeather, the forecasting service. “We think heat-illness deaths are woefully undercounted because people oftentimes have other medical conditions that yes, may have contributed to or caused their death, but it was aggravated by a heat situation.”

Predicting extreme heat is paramount so public health officials can prepare. But forecasts only go so far. AccuWeather, for instance, blends over 170 forecast models that are run by meteorologists with decades of experience. They can partially account for the heat island effect by incorporating land use data that shows which parts of a city have vegetation, which helps cool things off. That’s because plants “sweat” as they photosynthesize, releasing water vapour and cooling the air.

Heavily industrialized areas, on the other hand, tend to be devoid of vegetation. “You've got a lot of surfaces that are basically just reradiating heat, a lot of concrete and particularly asphalt because it's dark,” says Carl Parker, a meteorologist and climate specialist at the Weather Group, which runs the Weather Channel. “Then on top of that, you've got these artificial sources [of heat], including air conditioning units, and then cars that are also putting excess heat into the atmosphere.”

Other extra-granular factors contribute to making hotspots hard to predict. For example, different kinds of building materials, like brick or wood, absorb and release heat differently. And tall buildings block winds that would otherwise cool a landscape. Weather models consider wind generally, but there’s no way for them to model how air moves between every building in a city. So while meteorologists (and their algorithms) have gotten very good at predicting overall temperatures across the span of a city, these kinds of factors can make two individual spots a hundred feet away from each other very different.

There’s also the fact that you, standing on a street, will experience heat differently than a weather station would. These stations include sensors for temperature, wind, and pressure, among other indicators, and are dotted throughout cities: in parks, at schools, and along roadways. “The standard for taking temperature measurements, believe it or not, is in the shade,” says Porter. “Those are all temperatures that are being taken outside of the direct impact of sunlight. Which understandably is done that way, because depending upon the time of the day, that can have a huge impact on what the temperature is.” If you’re out in the open, that 90 F on your weather app isn’t going to feel like 90 F to your body.

To create a more representative value of what it actually feels like outside, AccuWeather produces a metric called RealFeel. It’s driven by an algorithm that incorporates other factors, like cloud cover, the angle of the sun, wind speed, and humidity. The last one gets extra complicated because the wetter the air, the less efficiently you sweat, which is why a humid heat feels so oppressive.

It’s critical to know how heat actually feels because people forced to be outside — construction workers, postal workers, the unhoused — are among those most at risk of heat illness and death, says the University of California, Los Angeles’ Edith de Guzman, director and co-founder of the Los Angeles Urban Cooling Collaborative, a partnership of researchers who work with communities on cooling strategies. If public health officials know a given neighbourhood is about to get particularly hot because of the heat island effect, they can focus resources there, for instance handing out water and getting people to cooling centers, which are typically public buildings with air conditioning.

This is a problem that doesn’t end when the sun goes down, because the built environment slowly releases its warmth throughout the night, keeping temperatures high. “The body doesn't even necessarily have an opportunity to just chill out, literally, in the evening,” says de Guzman. “And that, too, is problematic, because it's just a longer period of stress for the body.”

A person’s long-term exposure to heat increases their chances of heat-related illness and death. The young and the elderly are most at risk since their bodies can’t cool themselves as efficiently. (Infants sweat less, while the elderly can have chronic conditions that change how they respond to heat.) Extreme heat also exacerbates underlying medical conditions like asthma because hot air creates ozone, which further irritates the lungs. On a typical summer day in Los Angeles County, 150 people might die of all causes. “What we see is that on occasion, the number of deaths above that 150 can be bumped up by about 30 per cent during extreme heat,” says de Guzman. “So that's a significant number of extra deaths.” And that’s probably underestimating the true toll, as Porter says, because what might be counted as a death from a pre-existing condition might have actually been precipitated by heat.

Low-income neighbourhoods have it worse because apartments often lack AC to bring cool air in and proper insulation to keep warm air out. These neighbourhoods also have less tree cover, which in richer neighbourhoods helps attenuate the heat. For example, during the brutal heat dome that settled over the northwest last year, data showed air-conditioned houses were a comfortable 75 F while other households were 125 F.

“That 50-degree difference, I'd never seen that before,” says Portland State University climate adaptation scientist Vivek Shandas. “And it's really telling, in terms of how the structures that most of our cities are built with mediate temperatures.”

That discrepancy is no accident, says Shandas, who has studied the heat island effect in Portland, New Orleans, and dozens of other cities. “These areas were historically disinvested, through various exclusionary zoning practices, or racial covenants and redlining processes,” he says. “It's almost like a magnet, and it attracts these very land-hungry projects, like big-box stores or highways.” In New Orleans, for example, Shandas has found that the hottest areas ended up being 14 F warmer than the coolest areas, a lingering consequence of discrimination against the poor and people of colour.

Perhaps it's time to think of heat as a treatable disease that affects a city, not just its people. Working with community leaders, cities like L.A. can develop more green spaces, for example. Researchers are also playing around with reflective roofs and pavements, which bounce the sun’s energy back into space. “I like to think of Los Angeles, or whatever city, as being studied as a patient that is suffering from extreme heat, and what would we prescribe that patient,” says de Guzman.

De Guzman and her colleagues actually modelled this out in a paper they published last month. They simulated heat events in Los Angeles, with and without strategies in place to mitigate the heat island effect, and calculated what those improvements would mean for mortality. “We tried these different dosages, so to speak, of trees plus reflective surfaces,” she says. “Then through a process that involves creating algorithms and understanding actual mortality numbers that were collected and reported by the state, we're able to see how many of the excess deaths that we saw would have been prevented.” They found that making simple tweaks to the built environment, primarily adding trees and painting roofs light colours, would save one in four lives that would normally be lost to heat events.

Better understanding the urban heat island effect, how it differs within cities, and how to mitigate it, would help growing urban areas better prepare for a world that’s only getting hotter — and fast. “Even though we're in a very dire situation,” says de Guzman, “and we're seeing changes occurring faster than most scientists even thought, there are very practical solutions that we can implement at the local level.”

Anyone who wants a stark

Aside from the fact that it's a great read in itself, the description, from the mid 1800s, of horse-drawn sleds not being able to make it through the main streets of downtown Toronto, because of the depth of the snow, is very very instructive.