Canada backed bid to scale back ‘unabated’ fossil fuels, but pledge never made it into the final COP27 agreement 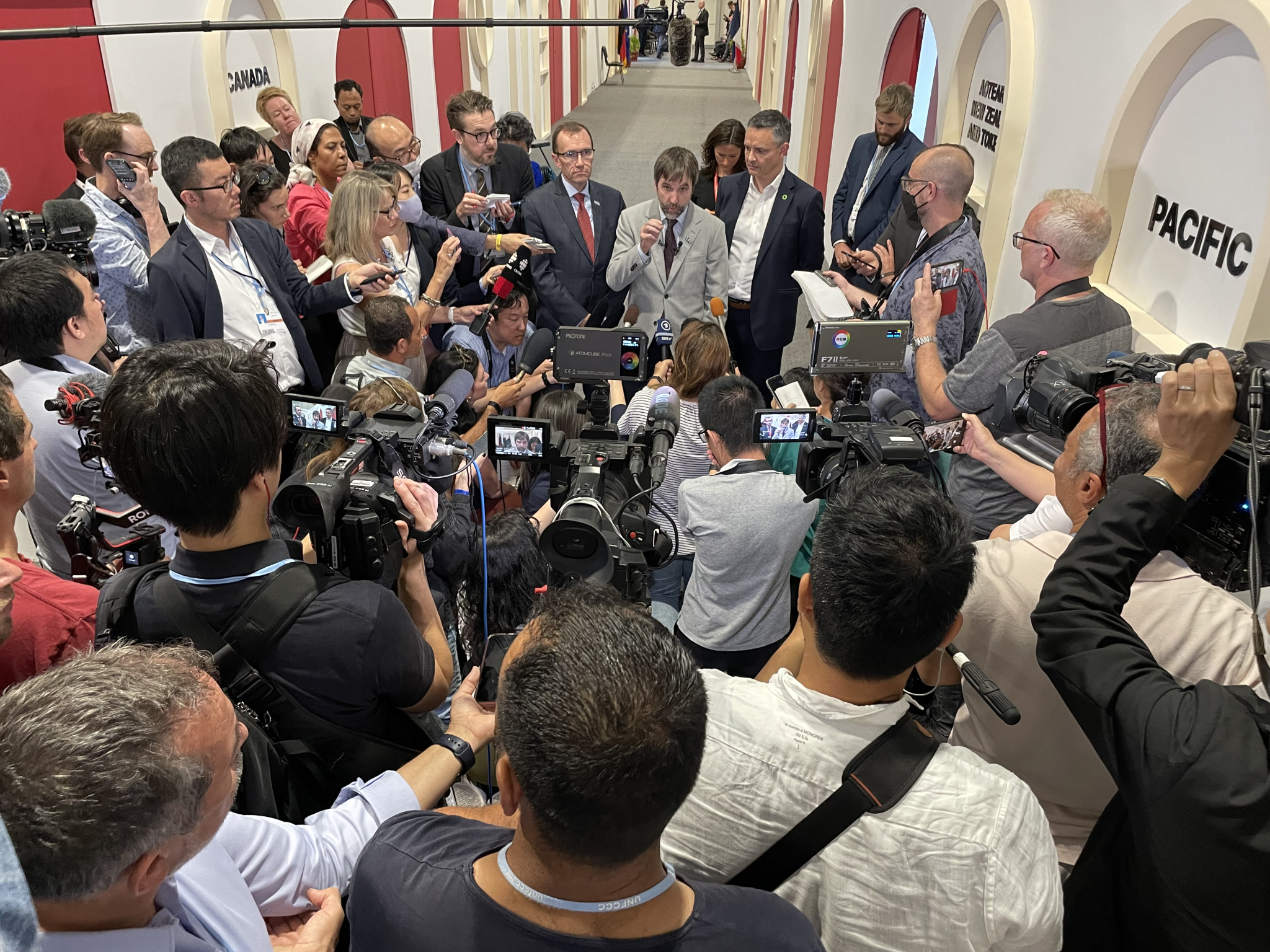 Canada was one of more than 80 countries to call for the phasedown of unabated fossil fuels as COP27 negotiations went into overtime.

Ultimately, that call did not appear in the final text of the COP27 agreement, which guides global action on climate change. Instead, the final agreement repeated a pledge from last year’s Glasgow Climate Pact referencing the need for a “phasedown of unabated coal.” But more than 80 countries pushing to name fossil fuels — not just coal — as the root of the climate crisis is significant, environmental activists say.

“Consistent with our Emissions Reductions Plan and net-zero policy, Canada gave our support to the position that calls for the phasing out of unabated fossil fuels,” federal Environment Minister Steven Guilbeault told Canada’s National Observer in an emailed statement. “I think it is important we address the elephant in the room.”

His statement acknowledged the “important role” environmental non-governmental organizations played in communicating the importance of the issue and giving it prominence in the media.

“Language around phasing down of fossil fuels was never presented or discussed in any of the consultation sessions I was a part of for the opening days,” said Guilbeault. “It was only late on the Friday that text was presented to us verbally by the United Kingdom.”

Canada was not the only oil-producing nation to lend its support to the U.K.’s position. The United States, Norway, Australia and India were also on board, with India seeking language to phase down all fossil fuels, abated or not, earlier in the conference.

The world is currently on track to exceed 1.5 C of global warming, which climate scientists warn is a dangerous temperature tipping point, as early as 2030 unless emissions are halved this decade, according to the Intergovernmental Panel on Climate Change. If we want a shot at staying at 1.5 C or less, Canada and other wealthy fossil fuel-producing nations must stop all production by 2034, according to a report by the International Institute for Sustainable Development.

Canada plans to increase fossil fuel production. If oil companies can reduce their emissions, then there’s room for more production, Prime Minister Justin Trudeau recently said at a climate conference in Ottawa. Recently, over $238 million worth of oil and gas exploration licences were greenlit by the provincial-federal regulator off the coast of Newfoundland and Labrador. The federal government has already put up big bucks to help the energy sector achieve emissions reductions. Budget 2022 introduced an investment tax credit for carbon capture, utilization and storage worth up to $8.6 billion, and the federal government is expected to announce a cap on oil and gas sector emissions in the coming months that would limit pollution from the industry but not production.

Canada came under fire for having fossil fuel lobbyists in its official delegation at the conference and hosting an event run by the Pathways Alliance, a group of companies operating about 95 per cent of Canada’s oilsands production. At least 636 fossil fuel lobbyists from around the world were in attendance at COP27, representing a 25 per cent increase from the previous year, according to analysis from Corporate Accountability, Corporate Europe Observatory and Global Witness.

Canada was one of more than 80 countries to call for the phasedown of unabated fossil fuels as #COP27 negotiations went into overtime. #cdnpoli #ClimateChange #FossilFuels

“I think there is a growing concern about the tactics that the fossil fuel industry has played to really oppress Indigenous people (and) communities,” said Eddy Pérez, international climate diplomacy manager at Climate Action Network Canada.

“Civil society, both in Canada but also at these climate summits, comes with a very clear focus to raise pressure so that the Canadian government understands that going to COPs and not talking about fossil fuels is hypocrisy,” said Pérez.

It's important to view the effort to include phasing down unabated fossil fuels in the final text as part of a broader mobilization effort, he added. Pérez thinks this shows “the effort to have a global movement of countries that want to make the fossil fuel phasedown a reality … is becoming something that is inevitable.”

COP27 “failed to deliver by remaining silent on phasing out oil and gas,” but “calls from around the world for an equitable phaseout of oil, gas and coal have never been louder,” Environmental Defence said in a press release.

Guilbeault said the Canadian delegation “fought hard so that the world did not backslide” on the commitments made to phase out unabated coal and inefficient fossil fuel subsidies from last year’s COP in Glasgow, Scotland.

“We helped prevent a backslide and kept 1.5 alive, but I am disappointed we were unable to get any further than that,” he said, referring to the need to hold global warming to 1.5 C to avert the worst consequences of climate change.

Canada also played an influential role in securing a loss and damage fund for vulnerable countries bearing the worst impacts of climate change, said Pérez. Months before the conference, Canada adopted a “progressive position” on the issue and distanced itself from the U.S. during negotiations on the fund, which Pérez thinks “influenced the way in which other G7 allies shifted their positions.”

He said it was critical for a country like Canada to step up on this issue and thinks “Minister Guilbeault did so, and it's important that we recognize it.”

Despite Canada’s “significant” role on loss and damages, Pérez said Canada’s performance was not the most ambitious because we didn’t bring much money to the table and did not present a strengthened climate plan.

Next year’s COP will take place in Dubai, United Arab Emirates, the seventh-largest oil producer in the world. In less than a month, international delegations will gather in Montreal for a parallel COP on biodiversity, an issue inextricably linked to climate change.

This article greenwashes Canada's position. On the Thursday, it was reported that Guilbeault was against including this language (https://www.theenergymix.com/2022/11/19/canada-refuses-to-back-oil-and-g...).
It's great that Guilbeault has been pushed to change his (indefensible) position. We can hope that he remembers it next year. We should be extremely careful not to give the climate-laggard Liberal government too much credit. Opposing something until the last minute is not the same as backing it.

The article fails to note

"After COP27, where does Canada stand on phasing out fossil fuels?' (National Observer)
"At the UN climate conference, COP27, Canada had a late flip-flop on the need to phase out fossil fuels. But it’s unclear where Canada stands now.
"For the first two weeks of the conference, Canada’s negotiators were aligned with the fossil fuel industry, adamant that there should be no mention of phasing out or even phasing down fossil fuel production in order to limit catastrophic climate change. This put Canada at odds with credible climate science, as well as the European Union, the U.S., India, and many other nations, and in line with Saudi Arabia, Russia, and Iran.
"But then, as negotiations dragged on past the scheduled end of the conference, Canada’s negotiators told the media they were open to language calling for phasing down unabated fossil fuels."

"Canada refuses to back COP27 call to 'phase down' oil and gas production' (National Observer, Nov 17 2022)
"Canada won't agree to add language calling for the phaseout of all fossil fuels — including oil and gas — to the final agreement at this year's United Nations climate talks in Egypt, Environment Minister Steven Guilbeault said Thursday.
"Canada backed the coal language last year, but Guilbeault said it's not open to adding oil and gas to the pact this year.
"Guilbeault said Canada's focus is on regulations and policies that curb greenhouse gas emissions, like regulations on how much methane oil and gas producers can emit.
"It's also focusing on reducing demand for fossil fuels with policies that promote energy conservation alternatives, such as electric vehicles, clean power and more efficient buildings.
"He said if Canada backed the addition of oil and gas phaseout language it would prompt pushback from the provinces, including in court.
"'Everything we do is challenged in the court,' he said. (Carbon) pricing was challenged, our plastic pollution regulations were challenged, our environmental impact assessment is being challenged — either by provinces or companies, or both. And if we're not on very solid legal ground, we will lose in front of the tribunals and that doesn't help anyone.'
"Guilbeault said Canada hasn't been challenged over plans to phase out coal, but is on almost everything it does on the oil and gas side.
"'We have to be super careful in terms of what we do … that what we do will hold in court,' he said. 'Otherwise we're wasting time, and precious time, to fight climate change.'
"Julia Levin, national climate program manager for Environmental Defence, called that a disappointing excuse.
"'I'd say it's clear that the government of Canada is beholden to fossil fuel lobbyists and putting their interests ahead of public welfare,' said Levin.

"Abated" fossil fuels primarily refers to carbon capture of upstream emissions. In the oilsands, this is a dubious proposition. A false promise to provide political cover for oilsands expansion.

CCS captures a fraction of emissions at high cost — only from large emitters. CCS does not capture other pollutants. Viable, if at all, only for concentrated CO2 streams like upgraders. Not feasible where sources are many, small, and diffuse. E.g., oilsands mines. Methane leaks. Tailpipes.
The Pembina Institute acknowledges that in the oilsands sector "most CO2 is emitted in low concentration streams, and the efforts to capture it will be challenging and expensive."
*
As per 2022 Pembina Institute "Getting on Track" report, heaters and boilers generate low-concentration CO2 streams. The only practical CCS application in the oilsands is hydrogen production plants associated with upgraders:
The cost and effectiveness of CCS depends on several factors, including the size of the waste stream and the CO2 concentration. For carbon capture to be economical/practical, CO2 concentration and volume need to meet minimum requirements. It is more expensive and less worthwhile to try to capture CO2 from small or diffuse CO2 sources. In case of many small or diffuse CO2 sources, total emissions may be high, but CCS is not economical or practical. Low-concentration CO2 streams incur high compression costs. Distributed in situ projects (over a wide area) also incur high transportation costs. Thus, in situ projects are at a double disadvantage.
In the oilsands, upgrader hydrogen plants (hydrogen production from natural gas) have high-CO2 (16-18%) streams. In situ projects (natural gas combustion --> steam generation: steam boilers and cogeneration plants for SAGD; large gas-fired turbines, boilers, and heaters) have low-concentration (4-8%) CO2 streams.
CCS is practical only for upgrader hydrogen production plants, but much more expensive and less likely for in situ projects. CO2 from small or diffuse sources like vehicles, heavy diesel powered machinery and trucks, tailings ponds, and mine deposits cannot be captured at all.
The Pembina Institute estimates that "full deployment of CCUS in all high-concentration streams could result in a decrease of c 7 Mt CO2e annually, which equates to 8% of total oilsands emissions."
Getting on Track (Pembina Institute, March 2022)

Article: "Canada plans to increase fossil fuel production. If oil companies can reduce their emissions, then there’s room for more production, Prime Minister Justin Trudeau recently said at a climate conference in Ottawa."
Tens of billions of public dollars out the window to capture a small fraction of total upstream emissions. Of course, reducing upstream emissions does nothing to cut the 80–90% of emissions generated from a barrel of oil downstream at the consumer end.
Whether upstream emissions are abated or unabated, CCS does not solve our climate problem. As long as production increases, CCS is not likely to significantly reduce even grossly under-reported emissions in the oilsands.