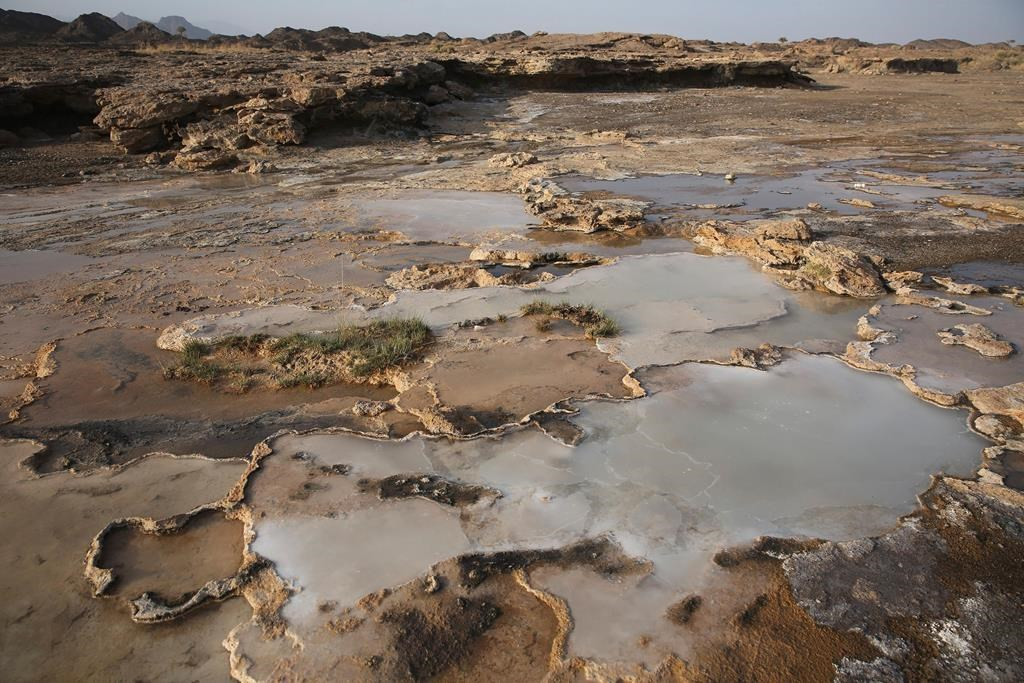 Travertine pools with white films of carbon fused with calcium, a chemical process being explored by a geological research project, in the al-Hajjar mountains of Oman, March 5, 2017. File photo by The Associated Press
Previous story

Deep in the jagged red mountains of Oman, geologists are drilling in search of the holy grail of reversing climate change: an efficient and cheap way to remove carbon dioxide from the air and oceans.

They are coring samples from one of the world's only exposed sections of the Earth's mantle to uncover how a spontaneous natural process millions of years ago transformed CO2 into limestone and marble.

As the world mobilizes to confront climate change, the main focus has been on reducing emissions through fuel efficient cars and cleaner power plants. But some researchers are also testing ways to remove or recycle carbon already in the seas and sky.

The Hellisheidi geothermal plant in Iceland injects carbon into volcanic rock. At the massive Sinopec fertilizer plant in China, CO2 is filtered and reused as fuel. In all, 16 industrial projects currently capture and store around 27 million tons of CO2, according to the International Energy Agency. That's less than 0.1 per cent of global emissions — but the technology has shown promise.

"Any one technique is not guaranteed to succeed," said Stuart Haszeldine, a geology professor at the University of Edinburgh who serves on a U.N. climate body studying how to reduce atmospheric carbon.

"If we're interested as a species, we've got to try a lot harder and do a lot more and a lot of different actions," he said.

One such action is underway in the al-Hajjar Mountains of Oman, in a quiet corner of the Arabian Peninsula, where a unique rock formation pulls carbon out of thin air.

Peter Kelemen, a 61-year-old geochemist at Columbia University's Lamont-Doherty Earth Observatory, has been exploring Oman's hills for nearly three decades. "You can walk down these beautiful canyons and basically descend 20 kilometres (12 miles) into the earth's interior," he said.

The sultanate boasts the largest exposed sections of the Earth's mantle, thrust up by plate tectonics millions of years ago. The mantle contains peridotite, a rock that reacts with the carbon in air and water to form marble and limestone.

"Every single magnesium atom in these rocks has made friends with the carbon dioxide to form solid limestone, magnesium carbonate, plus quartz," he said as he patted a rust-colored boulder in the Wadi Mansah valley.

"There's about a billion tons of CO2 in this mountain," he said, pointing off to the east.

Rain and springs pull carbon from the exposed mantle to form stalactites and stalagmites in mountain caves. Natural pools develop surface scum of white carbonate. Scratch off this thin white film, Kelemen said, and it'll grow back in a day.

"For a geologist this is supersonic," he said.

He and a team of 40 scientists have formed the Oman Drilling Project in order to better understand how that process works and whether it could be used to scrub the earth's carbon-laden atmosphere. The $3.5 million project has support from across the globe, including NASA.

Natural CO2 levels have risen from 280 to 405 parts per million since the Industrial Revolution, and current estimates hold that the world will be 6 C hotter by 2100.

In 2015, 196 nations signed the Paris climate accords, agreeing to curb greenhouse gas emissions to levels that would keep the rise in the Earth's temperature to under 2 C.

That has injected new urgency into the work underway in Oman, where Keleman's team recently spent four months extracting dozens of core samples, which they hope to use to construct a geological history of the process that turns CO2 into carbonate.

"It's like a jigsaw puzzle," said Nehal Warsi, 33, who oversees the drilling process.

Around 13 tons of core samples from four different sites will be sent to the Chikyu, a state-of-the-art research vessel off the coast of Japan, where Keleman and other geologists will analyze them in round-the-clock shifts.

They hope to answer the question of how the rocks managed to capture so much CO2 over the course of 90 million years — and to see if there's a way to speed up the timetable.

Kelemen thinks a drilling operation could cycle carbon-rich water into the newly formed seabed on oceanic ridges far below the surface. Just like in Oman's mountains, the submerged rock would chemically absorb carbon from the water. The water could then be cycled back to the surface to absorb more CO2 from the atmosphere, in a sort of conveyor belt.

Such a project would require years more of testing, but Kelemen hopes the energy industry, with its offshore drilling expertise and deep pockets, will take interest.

"Ultimately, if the goal is to capture billions and billions of tons of carbon, that's where James Cameron comes in," he said, half joking, referring to the "Titanic" and "Avatar" director who has also pioneered undersea technology. Cameron himself piloted a submersible to the deepest point on Earth in 2012 and retrieved samples while filming "Deepsea Challenge."

"He hasn't responded to my messages yet," Kelemen said.

People will find the solution

People will find the solution if they try. And by trying, they've found another interesting idea.

At last, a report on

At last, a report on something that is being done about CO2 and climate change, instead of just verbal attacks and protests!