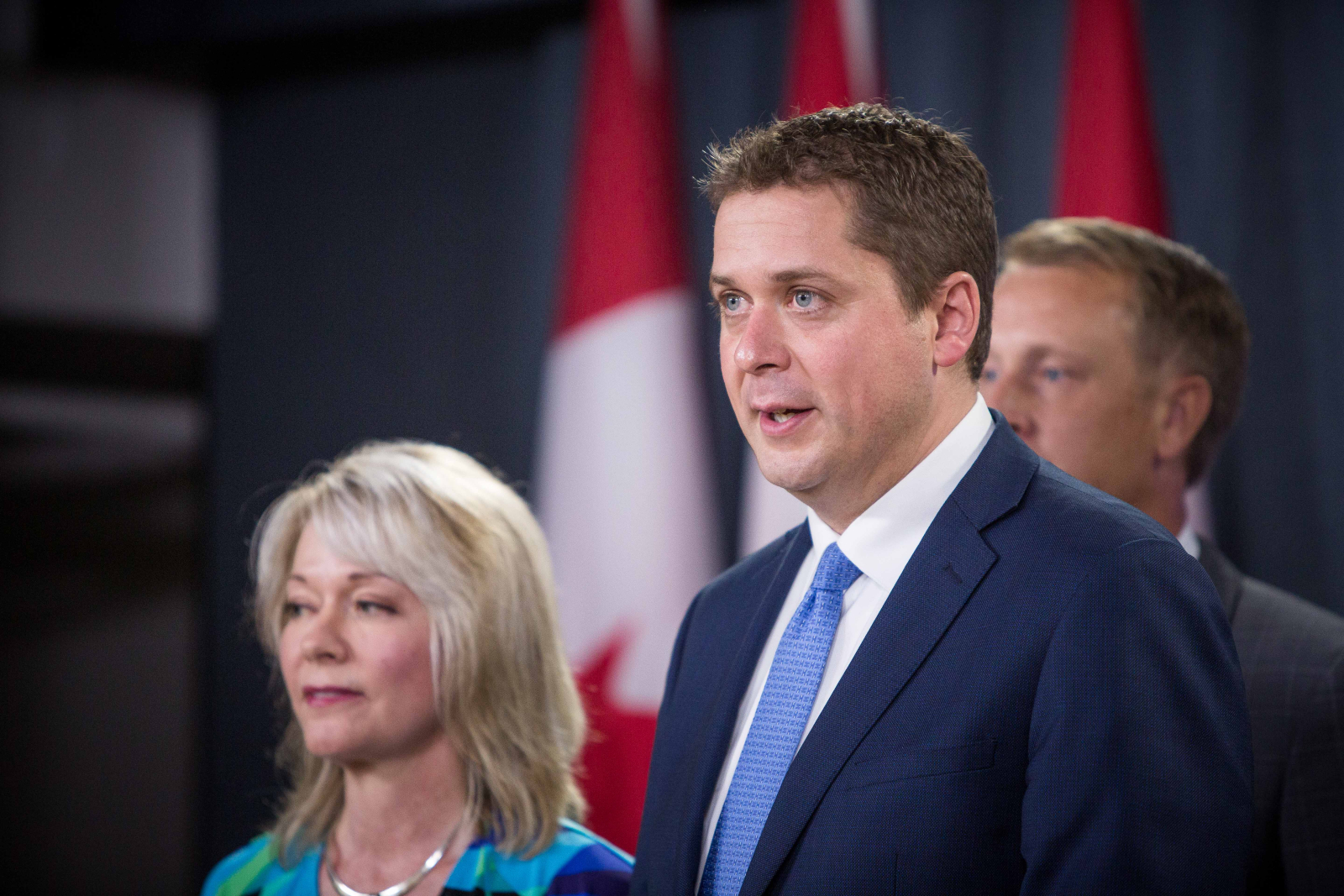 For the second time in less than a month, Canada's Official Opposition Leader Andrew Scheer is facing a "fake news" eruption within his caucus.

Conservative Party MP Kerry Diotte was the latest to use the term “fake news” on social media, attacking a left-leaning group with his own version of an insult that has become part of the vocabulary of United States President Donald Trump.

Diotte, the Conservative member of Parliament for Edmonton Griesbach, tweeted last night at Progress Alberta, which identifies as part of the Albertan progressive movement, calling it a “fake news outfit.” The tweet has since been deleted.

The expression "fake news" rose to prominence following the 2016 U.S. election in the wake of media reports that revealed fictional media articles had rapidly spread during the campaign with false information about the presidential candidates. Trump and his aides later started using the expression to denounce accurate news media reports that they didn't like.

Diotte is no stranger to journalism. He was previously a columnist with the Edmonton Sun before becoming a city councillor in 2010.

The tweet from Diotte was sent from Edmonton late Monday night, according to Twitter. “[email protected] you should be afraid, very afraid you Fake News outfit,” Diotte tweeted.

Progress Alberta originally responded to the tweet on its own account by replying, “please tell us what we should be afraid of. Remember, be specific.” This morning, it posted a picture of Diotte’s deleted tweet.

Diotte had moved on this morning to tweeting about CBC Radio coverage of the United Conservative Party, created by the merger of the Progressive Conservative and Wildrose parties in Alberta this weekend. (He also tweeted a link to a National Observer story on the topic on July 23.)

Progress Alberta’s executive director Duncan Kinney replied to the tweet about CBC Radio using his personal Twitter account, writing “I see you deleted the tweet that threatened me and called my org fake news. Any reason why?”

This isn't the first time Diotte has stirred up controversy over his social media practices. In February 2016, the former Edmonton city councillor deleted a tweet and apologized after posting a "Liberal Buzz Word Bingo" scorecard which made light of Liberal ministers using words and expressions such as "middle class," "Syrians," "First Nations" and "United Nations" in the House of Commons.

I see you deleted the tweet that threatened me and called my org fake news. Any reason why? #ableg #cdnpoli

Reached by National Observer on Tuesday, Kinney said he was disappointed by Diotte's latest tweet.

"It's shameful to see Trump-like language like this in the political discourse in Canada and Alberta," Kinney said.

He said he still wondered what it was he should be very afraid of.

Kinney called Progress Alberta a "hybrid" of journalism and campaigning. "We do independent reporting, research and campaigns," he said, primarily through examining primary-source documents or examining data. The site has never run a correction or issued an apology, or a retraction, he said.

On Monday, Trump railed repeatedly against "fake news" at the Boy Scouts National Jamboree in West Virginia. The president has published over 60 tweets attacking "fake news" since the election, according to media reports.

Diotte's constituency office referred queries to his Parliament Hill office, which didn't respond to an interview request before publication.

Kelsie Corey, communications officer in Conservative Leader Andrew Scheer’s office, said Diotte wasn’t available for an interview. She said she couldn’t comment on his tweets or on why he wasn’t available.

Another representative in Scheer’s office did not respond to questions before publication.

Andrew MacDougall, a communications consultant who worked as a communications director for former prime minister Stephen Harper, has slammed Gallant and other Conservatives for attacking the news media. MacDougall said that these types of attacks against journalists don't serve the public interest.

"Politicians like Gallant might not like the news media, but she'd like the world without it a lot less," MacDougall wrote in a recent opinion piece published by the Ottawa Citizen. "If Gallant thinks playing into the growing cynicism about the bias of the media is good for public life, then she's not fit to serve in public office."

We have an idiot running the

We have an idiot running the US and now we have a bunch of idiots trying to copy his idiocy right here in Canada. If they really love the US so much I really wish they would move there but of course they would have to give up universal health care to do so. i guess we are stuck with them. =(

The iPolitics site has also

The iPolitics site has also started some conversation comparing Ezra Levant's Rebel to PressProgress and Rabble as extreme left minded Opposites. Very strange comparison. Rebel v. Rabble. Most people in Canada know that there is no extreme left in Canada. I think we're lucky to have any political party or media that is left of center.

People who read are able to

People who read are able to tell the difference....I stumbled on the Rebel site once...while following the Sandra Jensen story, and the language is appalling....the development of ideas non-existent, and the ideas often pure fantasy. I remember a number of commentators thought Jensen should be tried for treason for crossing the floor to the NDP....
In general, I suspect the folks constantly calling out the media for 'fake news' have a very loose grip on reality to begin with. Anything that disagrees with their prejudices or misconceptions has to be fake, right?

No way they could be wrong...or even mistaken.

We follow Progress Alberta from time to time and have never found invective, rudeness, or opinions unsuported by evidence. Of course not everyone is going to agree with their perspective, and that's fine in a democracy. But it seems to me that after all the years of kowtowing to Harper's line, many conservatives need to brush up on reality....contrary to some of their assumptions, the world doesn't issue full blown from the mouths of conservative politicians.

Trump obviously thinks he creates reality by tweeting it out to the universe. But he's the leader of a failing state. Canadians, I trust, are going to do everything in our power to keep our little country moving on the right side of history. That means telling some home truths that neo-cons don't like to hear.

The truth about climate change is one such bit of reality from the ground that they are going to have to suck up. The end of the Age of Fossil fuels, and fossil fools....is another. Kicking a screaming, the rest of us are going to do our best to drag them into the 21st century.