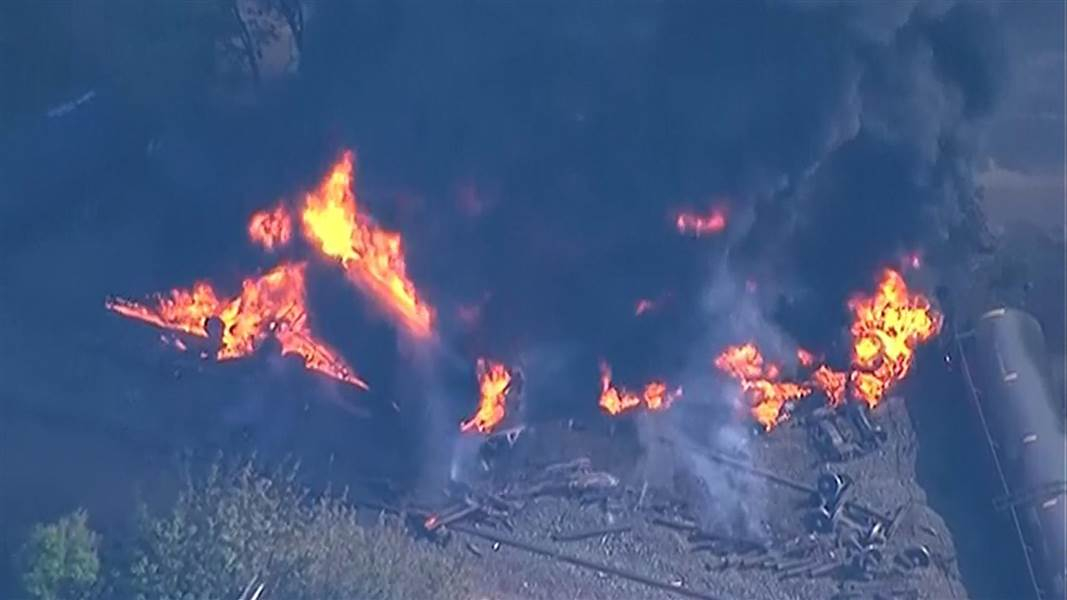 Oil train cars of this type will be allowed until 2025. This one shown burning near an Oregon school in 2016. Photo by AP
Previous story
Next story

At the end of July, Transport Minister Marc Garneau announced Canada would accelerate the phase-out of the class of rail tank cars that exploded in Lac-Mégantic in July 2013, taking 47 lives. Rather than wait until 2018, as in the U.S., the minister told media Canada's legacy DOT-111 cars would cease transporting crude oil by October 31, 2016.

Garneau called the move “another crucial step in improving the safety of communities along our railway lines.” Transportation Safety Board Chair Kathy Fox said it was “a positive step (that) highlights Canadian leadership in terms of action taken to improve tank car safety.” And a number of Quebec politicians, including the Québec Union of Municipalities, likewise welcomed the decision. But was it really such a crucial step? A closer inspection shows the risk to communities along rail lines used to transport oil and other dangerous products, remains high.

Garneau failed to mention in July that modified DOT-111 tank cars, called CPC 1232s, still carry, and will continue to carry for well into the future, the vast majority of crude oil currently transported in North America. US National Transportation Safety Board member Robert Sumwalt, at a July 13, 2016 roundtable on rail tank car safety, referred to these CPC–1232 tank cars as, “a slightly improved version of the legacy DOT-111's.”

(Note that DOT-111's are called TC-111s in Canada but in order to make cross-border comparisons in this article, I'm using the American designations DOT-111 and DOT-117)

There has been a massive reduction in the number of legacy DOT-111 crude oil tank cars in circulation—the kind involved in the Lac-Mégantic disaster—but this is explained largely by a major slowdown in the amount of oil being transported by rail due to the collapse in oil prices.

There are basically three categories of tank cars that make up the North American crude oil fleet. The first is the legacy DOT-111s—the kind that derailed in Lac-Mégantic. The second is the modified DOT–111s tank cars (built since 2012), which comply with the industry’s CPC 1232 standard (both jacketed and non-jacketed).

The third category of tank car is the state-of the-art DOT-117 model, built to new (more stringent) US and Canadian specifications based on lessons learned from Lac-Mégantic and other major accidents. They have been in production since 2015 and will fully replace the other models by 2025.

The major slowdown in transportation of oil by rail due to slumping demand is likely to persist for at least the next few years. As a result of this slowdown, the large majority of North America’s crude oil tank car fleet is currently not in service carrying crude oil, and is presumably idle or carrying other dangerous products.

The number of legacy DOT 111 tank cars in crude oil service dropped to a miniscule 708 from 30,000 in 2015. This is what’s left to eliminate according to AAR vice-president, Robert Fronczak. These are the cars targeted by Transport Canada’s accelerated phase-out timetable.

The non-jacketed version of CPC-1232s will not be removed from service in Canada until April 1, 2020—almost four years away. The jacketed version will be on the rails carrying crude oil until May 1, 2025—almost nine years from now.

Over 10,300 tank cars have been built or retrofitted since 2015 to the new DOT 117 standard. Just 20 per cent of these are currently available to haul crude oil. The rest are earmarked for other dangerous goods.

How safe are these CPC-1232 crude oil tank cars?

In May 2016, a unit oil train carrying 102 cars of Bakken crude derailed near the town of Mosier, Oregon. A number of its cars punctured at a speed of 25 mph, spilling their contents, which exploded and burned, narrowly averting loss of life. These cars were jacketed CPC 1232 models. They will be allowed to carry crude oil in Canada and the US until 2025.

Disturbingly, according to information from the Transport Canada’s Transportation of Dangerous Goods Directorate (TDG), most jacketed CPC–1232s will be considered to have reached DOT–117 standard (denoted as DOT 117R) after only “very minor adjustments if any.”

There are in fact significant differences between newly constructed TC–117 cars and the retrofitted CPC-1232s, which will be reclassified as DOT-117R. The latter have a 1/8 inch thinner shell, making them more prone to puncture. Furthermore, the new DOT–117s have a ceramic thermal blanket. The jacketed CPC–1232s have only a fiberglass-insulated blanket, which has prompted concerns that it constitutes a weaker protection against rupture.

In February and March 2015 respectively, two separate CN trains carrying crude oil (bitumen and synthetic crude) and petroleum distillate from Alberta, derailed near the town of Gogama in Northern Ontario. Many cars punctured and spilled their contents, which exploded and burned for days, poisoning the waterways and wildlife. These tanks cars were all built after 2011, most to the non-jacketed CPC–1232 standard. Their sister cars will be on Canadian tracks for almost another four years. The largest of the two accidents punctured the cars at a speed of 38 mph, well below the permissible speed of 50 mph.

Between now and 2025, when they are fully replaced, the “slightly improved” CPC–1232s (2020 for the non-jacketed version)—which are still prone to puncture at relatively low speeds as evident from recent accidents—will continue to transport the vast majority of crude oil through populated communities in North America.

The huge number of CPC-1232s sitting idle at the moment can easily be pressed into service, instead of using what remains of the legacy DOT-111s, to meet any foreseeable increase in demand over the next 14 months and beyond.

Thus, the announced accelerated phase-out of legacy DOT-111s by 6 to 14 months, far from being a “crucial step” to enhance rail safety, is mainly symbolic.

A truly meaningful step, reflecting the urgency of their removal, would be for Transport Canada to advance the 2025 phase-out deadline for all CPC-1232 tank cars to 2020, if not sooner. “…We face an unacceptable risk until this effort is completed,” in the words of National Transportation Safety Board member Robert Sumwalt.

Why? Potential buyers are stalling; with the current replacement deadline far down the road, costs are trumping safety.

The people of Lac-Mégantic could be faced with the resumption of unit trains carrying volatile oil - in still far-from-safe tank cars - through their town starting in less than six months.

I’m inclined to think this announcement was designed to assuage public anxiety over the risks inherent in transporting oil by rail, diverting attention from fundamental reforms to the rail safety regime that have yet to be made. Also, an effort to mollify the citizens of Lac-Mégantic and divert attention from its obligation to build a rail bypass around the town.

It is not only the railways'

It is not only the railways' oil tanks that need upgrading. FortisBC is trucking LNG from Delta to Whitehorse and Inuvik and possibly Revelstoke in sub-standard non-ISO containers. One of them rolled off a truck on the Klondike Highway some time ago- see news article at http://whitehorsestar.com/News/lng-will-be-transferred-to-second-tanker . From the picture, it is obvious this is not an ISO-standard LNG container with some roll protection, and as such should (IMHO) be banned from use on highways (or railcars). See the ISO-standard container at http://www.lngglobal.com/20-and-40-foot-lng-iso-tank-containers.html . To appreciate the damage a leaking 20-tonne LNG truck-tank can do, see
https://www.youtube.com/watch?v=QTQrVXEPQrM