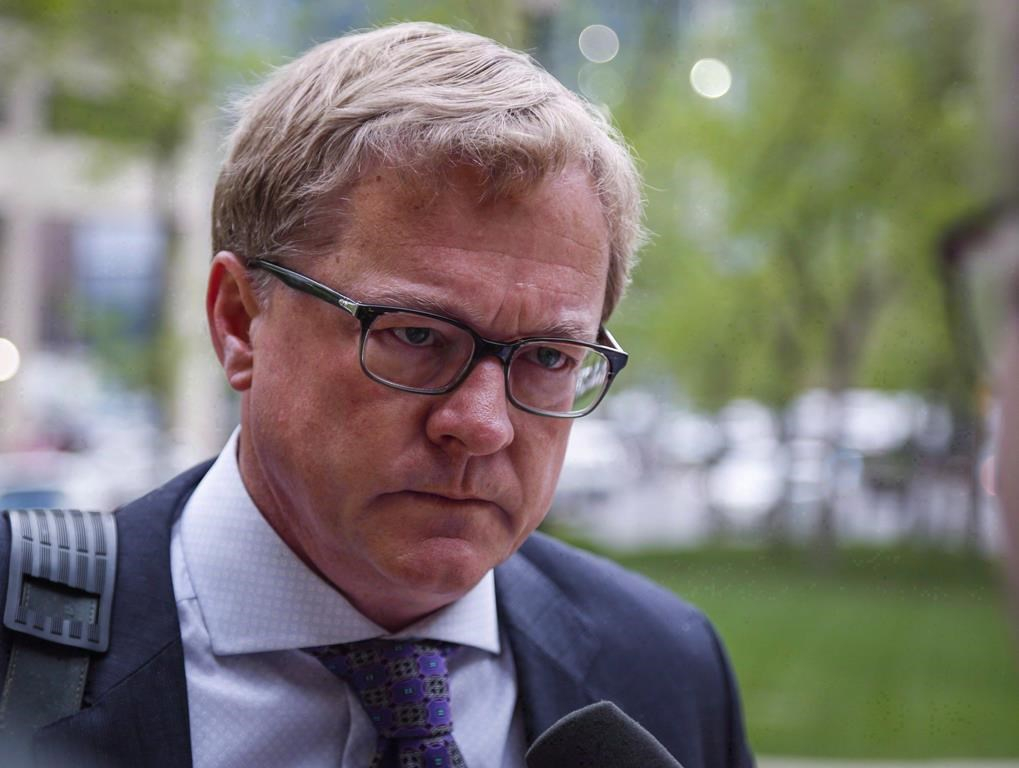 Alberta Education Minister David Eggen arrives for a cabinet meeting in Calgary on Thurs. May 28, 2015. File photo by The Canadian Press
Previous story
Next story

Alberta’s ruling New Democrats are reassuring the oil and gas industry that a revamped science curriculum won’t portray them negatively, even as they move to ensure students learn that climate change is real.

Education Minister David Eggen and Energy Minister Margaret McCuaig-Boyd hosted representatives of energy companies and environmental groups at a round table Wednesday to get input on the government’s $64-million review of what children are taught in the province’s classrooms.

Eggen told reporters the new curriculum will be evidence-based and include the best information available on how greenhouse gases are impacting the world’s weather.

But he said it will also ensure students are not misinformed about and understand the merits of energy megaprojects like the proposed Kinder Morgan Trans Mountain expansion pipeline that would carry Alberta bitumen to the B.C. coast.

“You need to have a fair representation of this industry because it is so important to our economy and quite frankly you need to have the facts straight every step of the way,” he said.

United Conservative Party Leader Jason Kenney was not available for an interview, but in a prepared statement the party criticized the hour-long private discussions at Calgary’s McDougall Centre as proof that the revised K-12 handbooks are being rewritten behind closed doors.

“Jason Kenney has been clear that a UCP government would conduct a thorough review of all curriculum changes by the NDP and will not hesitate to go back to the drawing board if necessary,” the statement said.

With little more than eight months to go until a provincial election in Alberta, Eggen said Kenney is borrowing a page from the playbook of Ontario Premier Doug Ford, who was recently elected on a platform of repealing that province’s sex education curriculum.

“We see the ‘gong show’ that is happening in Ontario. That’s what Jason Kenney wants to export here, too,” he said. “We don’t need that kind of divisive, reductive politics here in Alberta. We are a much more sophisticated society.”

When reporters weren’t in the room, however, some participants say the ministers were at pains to point out to stakeholders that partisanship has no part in the curriculum rewrite and that they don’t want the process politicized.

"I have no grave concern their intent here is to have our schools start churning out environmental activists,” said former Alberta education minister Thomas Lukaszuk. #abpoli #abed #ableg

“We were pleasantly surprised to be asked to provide input, and I expect it may be because the government is worried about how this rewrite could be portrayed,” said Justin Sullivan, who represented the Canadian Association of Petroleum Landmen at the session.

“If the outcome is a more energy-centric curriculum, I’m fine with it.”

Kathryn Wagner of Inside Education was part of the round table. For the last 30 years, her non-profit group has been using funding from the Alberta government and energy companies like Cenovus and Suncor to create classroom materials with what it says is a “balanced look” at energy and environmental issues.

“There’s a lot of excitement around energy, climate change and the environment,” Wagner said. “Teachers are keen to include this information in their classrooms and they’re doing that now.”

Teachers in Canada are bound by the provincial curriculum, but the amount of time they allocate to climate change and the manner in which they teach it is subjective, according to a pair of Alberta educators. The crunch for time meant the topic got as little as six days in some Grade 9 and 10 science courses.

Last month, Eggen released proposed changes to the Kindergarten to Grade 4 Science curriculum to allow for feedback from parents, teachers and other interested groups. The new course of study asks students to look at the impact of human activity on the environment, particularly water and soil conservation.

The Social Studies curriculum for the same grades includes a section on society’s responsibility to protect the environment and a look at how Indigenous people value the land and animals in their culture and traditions.

The curriculum review is a lengthy process that will continue to 2022 when the department expects to tackle what students will learn in their high school years.

Thomas Lukaszuk, a former teacher who once held the education portfolio in the prior Progressive Conservative regime, said the current curriculum review was initiated by his government a year before the New Democrats swept into power in 2015.

“Mr. Kenney is doing his job and trying to attribute motive, but the fact is the curriculum was outdated and in need of updating,” Lukaszuk said in a telephone interview.

“The fact is the New Democrats have taken this need seriously and put the process into top gear...I have no grave concern their intent here is to have our schools start churning out environmental activists.”

Instead of mollifying reps

Instead of mollifying reps from the industry we should be working to transition. It's getting late, people! This morning the smoke darkening the Calgary sky is reminiscent of movies about the dust bowl. The planet is burning and we're sucking up to the arsonists that set the fire.

Even while smoke from B.C.'s

Even while smoke from B.C.'s burning forests darkens Alberta's western horizon and beef ranchers face bankruptcy on their scorched pastures, pre-Enlightenment conservative Albertans threaten to reduce atmospheric science curriculum to that of middle-eastern schoolrooms in the fashion of Ford Nation folk and their ideological compatriots to the south of the 49th.

Sounds to me that David Eggen

Sounds to me that David Eggen and Ms.Notley have been "warned" by oil officials. So much for free speech. I guess not mentioning the harmful effects of tar extraction shouldn't be taught in schools...even though the air, water and soil are being poisoned by this same industry. Health effects should not be included...because there hasn't been any health studies on the effects of oil and gas on people...The people of Ft. Chipewyen might have something to say about that....but that's just anecdotal....raise in cancer rates and other illnesses have nothing to do with tailing ponds leaks and and air pollution...really???