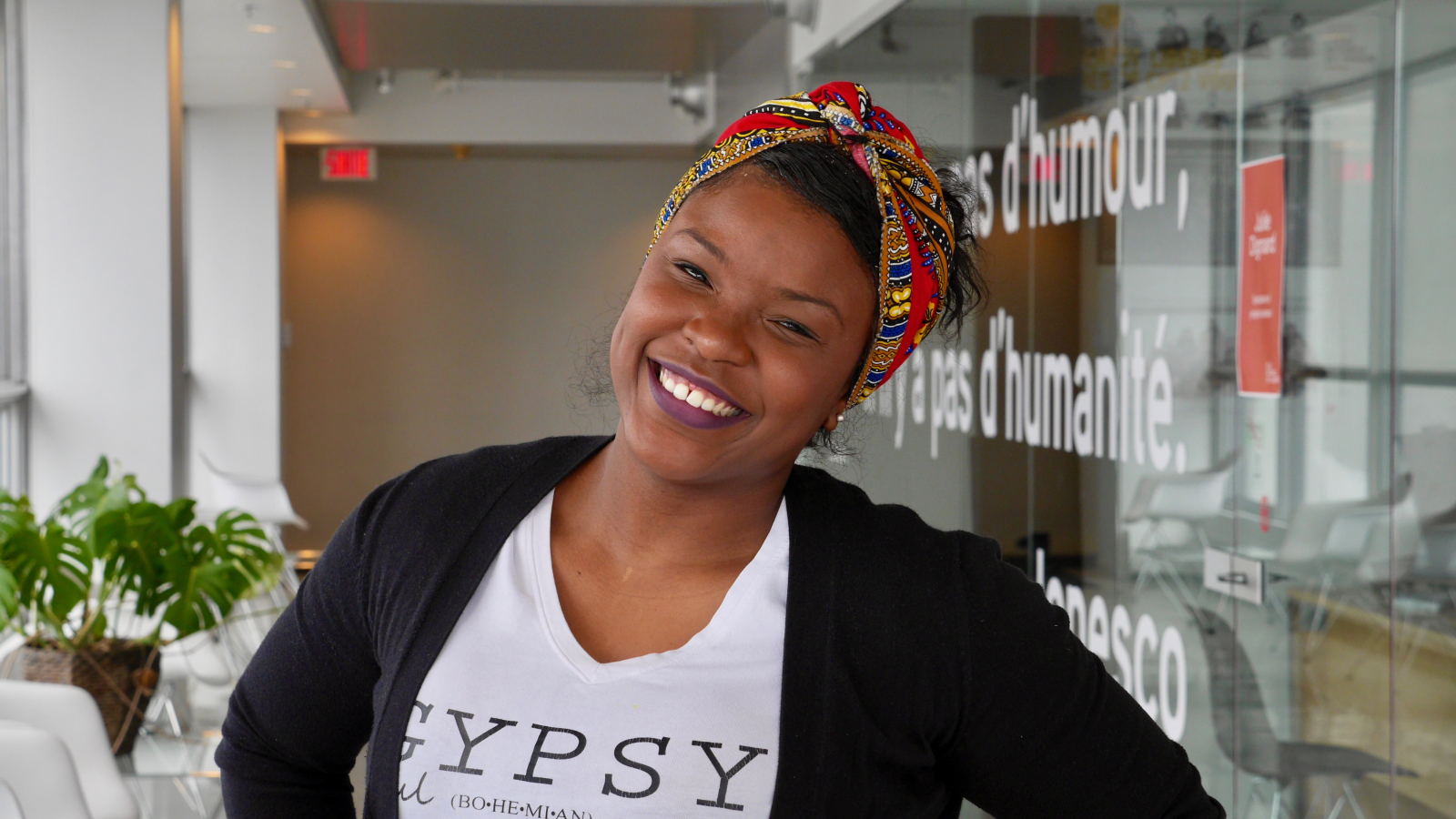 Since its creation in 1988, a Quebec school for comedians has proudly displayed photos of annual graduates on its walls. Garihanna Jean-Louis wanted hers to be original.

She looked for inspiration by walking around the comedy school, École nationale de l'humour, in Montreal enjoying past photos. Some showed graduates with pets or children, one wore a pirate eye patch and another held a Tim Horton's coffee cup.

But she couldn't help noticing something was missing.

“I walked around four times," she recalled. Then she went to see Louise Richer, the school’s director. "I told her ‘I’m going to ask something and tell me if it’s true or if I’m crazy.’”

The director could not believe it either. She went to check all the photos herself and realized, in July 2017, that Jean-Louis was the first black woman to graduate from the school.

“I know three black women doing humour in Quebec: Dorothy Rhau, me and my sister,” Jean-Louis said shaking her head in disbelief, during an interview at the school with National Observer. “Working hard is ok, but me, I have to work twice as hard to get half as much because not only I am a woman but I am a black woman.”

One foot in Quebec, the other in Haiti

Jean-Louis, 28, has an unique story growing up as a dual citizen with one foot in Quebec and the other in Haiti.

“I know three black women doing humour in Quebec: Dorothy Rhau, me and my sister,” Garihanna Jean-Louis said. "I have to work twice as hard to get half as much because not only I am a woman but I am a black woman.”

Born in Montreal in 1989, she was five when her parents moved back to Haiti after 25 years in Quebec. She returned to Montreal alone at age 15 because her parents were frightened of political instability in Haiti and wanted her to be safe. She found it hard to live in Montreal with her brother and returned to Haiti.

When she was 18, her mother and older sister were kidnapped and sequestered for three days. The family eventually learned the kidnapper was someone they knew.

The trauma was too much for her parents who insisted on her to return once again to study in Montreal. At University of Montreal, Jean-Louis studied economics and criminology and started work as a cadet with Montreal’s police force, SPVM.

She remembered kids who would look at her, impressed and curious to see a young black female police officer.

“I loved it,” she said. “There was this human contact, to be able to see people when you were patrolling on bike or on foot. You would see people, say hi and smile. People were happy and small kids would come to you and say ‘Look it’s a black police lady!’”

Jean-Louis started acting at age five and was part of a professional theatre company in Haiti when she was growing up. She also joined a drama club at the University of Montreal.

At the university, she started to develop a passion for criminology through her work for the police force. At the time, she said she even pictured herself becoming an investigator at the police department.

But when her dad suddenly died in 2013, she started re-evaluating her life.

“What had always motivated me was to be on a stage, and throughout my life, in good and bad times, I was always on the stage,” she said. “It was the place where I felt complete and could be myself.”

So she decided to return to quit policing and returned to Haiti again for the theatre.

Despite her enthusiasm, her decision to “drop her entire career” and go back to Haiti had her mother worried.

Plucked for a scholarship

“She almost pulled all of her hair out,” she said. “Haitian parents, immigrant parents don’t value artistic jobs… They always want to ensure the financial security and stability of their kids, which is not a bad thing.”

While Jean-Louis’s mother, an architect, loved theatre, she had always thought her daughter would keep her acting passion as a side job or leisure activity.

Jean-Louis started teaching theatre at middle schools in Port-au-Prince, Haiti’s capital. But in 2015, when the Quebec comedy school organized a workshop in Haiti, Jean-Louis's older sister, Cynthia, encouraged her to participate.

At the end of the week-long worskhop, the school instructors selected a few of the Haitian comedians to perform at a gala in Montreal. Jean-Louis, who had never done comedy before the workshop, auditioned with a skit about her dual culture and got in.

A few weeks later, two hours before performing in Théatre Maisonneuve in Montreal, Louise Richer, director of the school, called Jean-Louis and offered her a scholarship.

“She wanted a response because she had to announce it at the beginning of the gala,” said Jean-Louis. “I had a few minutes to decide about the rest of my life’s career and I said 'yes.'”

While she was very new at comedy, Jean-Louis started realizing that maybe she had simply never realized humour was her strength.

“For my (friends and family), it was obvious,” she said. “When I was young, people said ‘this girl is always making us laugh’ but I didn’t get it. I thought it was normal to make your friends laugh, to make your mom laugh.”

But things are different now.

Since 2015, Jean-Louis has been performing as a comedian in shows in Quebec, Haiti, the United States, and France using her own identity and background to connect with audiences.

“Laughing is universal but humour is cultural,” she said. “The jokes I do here in Quebec are not the jokes that will make a Haitian or New Yorker audience laugh and even when it’s the same language, the expressions and words will be different.”

She said that typical Quebec audiences tend to be polite, clap at times and smile while Haitian audiences will yell, laugh and sometimes start telling their own jokes.

“If you don’t watch it, they will get on your show, they won’t go on the stage but will say their own jokes,” she said laughing.

But she said that when Haitian audiences do not like comedians’ jokes, they will not be polite and won’t react at all.

She thinks that her training in criminology also helps her understand her audience and adapt her jokes for them.

“It’s about gauging the emotions of your audience and the people who you’re talking to,” she said. “Maybe if I hadn’t studied criminology, I would have allowed myself to joke about anything, anytime and with anyone, but I don’t.”

Jean-Louis is often asked to perform for a range of different audiences, including teenagers in middle school and women's shelters.

“I have skits that talk about battered women because these are things I’ve seen and that people around me have lived through,” she said.

But she said she's sensitive about what material she'll use in a show, depending on the audience.

Serving as a symbol can be a burden

Jean-Louis is often portrayed as a symbol for black women in Quebec, something that makes her proud but is sometimes a heavy burden.

“I have my own voice but also recognize that I represent a voice for a community of woman coming from diversity,” she said. “I might be the only one with the microphone or on the stage today but I’m not alone in this process because behind me, there are lots of people of all ethnicities, Caucasians, blacks, Asians.”

She believes she is seeing progress in society and that Black History Month is a sign of changing times.

However, she said there's a need for wider awareness of Canada and Quebec’s black history.

Jean-Louis is not one to give up. An optimist, she has started a cultural company with her older sister, Cynthia, a former doctor who has also become a comedian. Cynthia moved back from Haiti to Montreal last year.

Together, they have an act called “The Jean-Louis sisters.”

Garihanna Jean-Louis uses any opportunity she has to spread her jokes, whether on Twitter where she describes herself as a “binational with a mango-maple syrup flavour sense of humour” or to her more than 10,000 followers on Facebook.

“If no one gives me my spot, I will create it, and right now, I’m at this moment of creating my own spot,” she said.

Editor's note: This article was updated at 2:15 p.m. ET on Feb. 22 to correctly identify Garihanna Jean-Louis's previous role as a police cadet.

Enjoyed this story so much;

Enjoyed this story so much; great subject matter, excellent research and wonderful exposure of a person with such tenacity and personal strength.

I love this story; thanks for

I love this story; thanks for relating it!