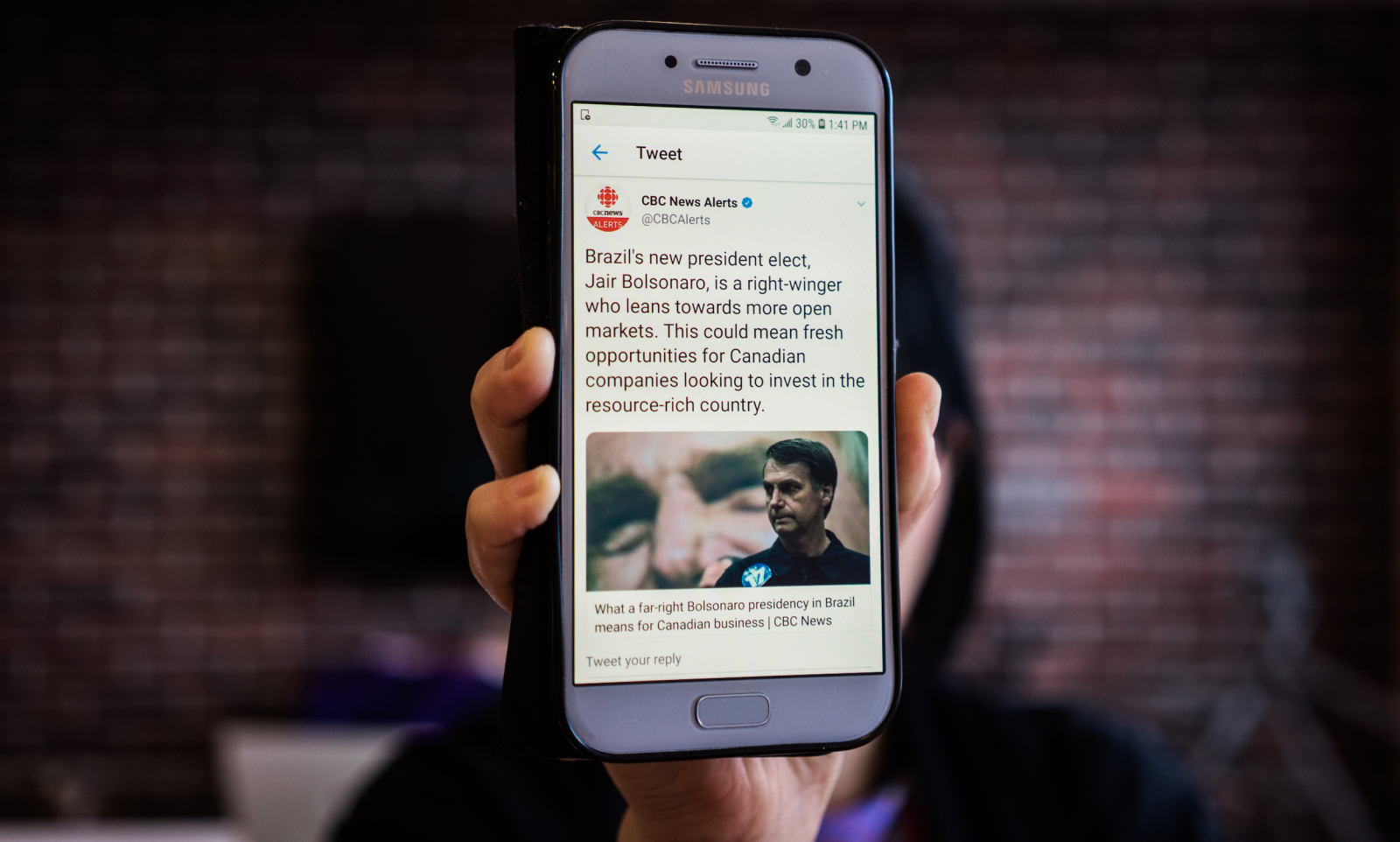 What is going on at Canada's public broadcaster? In response to Brazil's election of a wildly neo-fascist president, CBC News is glowing about new opportunities for Canadian mining companies in devastating the Amazon.

Bolsonaro is an unapologetic admirer of dictatorship, pro-torture, misogynistic and anti-LGBTQ. He has threatened to "disappear" indigenous peoples and has vowed to open up the rainforests of the Amazon to extractive industries. With time running out to avert climate breakdown, Bolsonaro's election is a catastrophe — he recently threatened to follow the lead of Donald Trump and quit the Paris climate agreement.

The demons of fascism just made another breakthrough, and the CBC trumpets not just a silver lining, but golden opportunities:

Brazil's new president elect, Jair Bolsonaro, is a right-winger who leans towards more open markets. This could mean fresh opportunities for Canadian companies looking to invest in the resource-rich country. https://t.co/g00QUOeutt

As a Brazilian I say to u how nice of you publish such an article. It doesn't matter if he is a fascist right? I'll write this now before I lose my rights let's hope not my life. Right now here people are being assaulted by his supporters and the police. But hey bussiness opportu

Brazil gets a wildly neo-fascist president, CBC News is glowing about new opportunities for Canadian mining companies in devastating the Amazon.

Brazil elects an actual fascist and CBC asks what it all means for Canadian mining companies #Bolsonaro #Brasil #cdnpoli https://t.co/nafsiHah9C

I did READ the actual article, Chris. It had a sinister feel. "With nearly 60 per cent of the world's public mining companies listed on the Toronto Stock Exchange, losses for the Amazon rainforest under Bolsonaro could spell big gains for Canadian investors." Via @andraydomise https://t.co/odlRdYPyDR

While National Observer columnist Sandy Garossino has dropped the gloves:

FFS somebody killed 11 Jews yesterday, and the day before a right-wing terrorist was arrested for sending bombs.

Where are your brain cells @cbc? #cdnpoli https://t.co/IWrJD7opTm

For the record, here's a small taste of Bolsonaro's rhetoric:

“I would not rape you because you are not worthy of it.”

"Our Amazon is like a child with chickenpox, every dot you see is an indigenous reservation"

Canada is so very fortunate that previous generations have invested in creating the public broadcaster we have today. Responsible journalism is a critical immune booster against the neo-fascists infesting societies around the world and fake news campaigns infecting and fracturing democracies. Let's do better.

For the past several years

For the past several years and for the first time in my life I have begun resenting paying for the CBC and in particular CBC News.

I think some readers are a

I think some readers are a bit confused.
Economically, the election of Jair Bolsonaro, who leans towards more open markets, is a good thing for business. Businesses like fewer regulations and other things which "hinder growth." Politics don't matter particularly if the economics are good.
However, Bolsonaro's growth may be very bad for many people. K, ainda cabe sonhar points out the problem comments above.
The CBC reported factually on the situation. That is its job. Even if the situation is going to mean grief for a lot of people in Brazil, Canada, and elsewhere. That grief should also be reported. But there aren't enough characters to do all of that in one tweet.

I am not here to argue, nor

I am not here to argue, nor to defend the CBC for the manner in which they portrayed Canada's role in Brazil. The CBC, though the statements they made are jarring and seemingly ambivalent (I watched the National where this aired) is not lying. Canada's mining companies and trade deals are going to benefit from Bolsonaro being President and his eradication of indigenous communities, clearing the Amazon, moving rivers, and all other unimaginable atrocities. I believe what we should be doing is challenging our government and their trade with Brazil - something that we should have been doing for a long time, not attacking the CBC for speaking the truth on the matter. It's the same mentality applicable to oil pipelines, you know? I do not support the pipeline, but living in Alberta, I am met with a lot of pro-pipeline news. It's a 'thing' - you live in Canada, expect pro-Bolsonaro coverage (because we benefit, like it or not)

You are not here to argue nor

You are not here to argue nor to defend the CBC. Funny then that your post defends the CBC. As to not arguing, what, do you presume you are above the disagreement of petty persons with views different from your magisterial ones? If you take a stance which others are likely to disagree with, attempting to cut off debate isn't high-mindedness it's just playing dirty.

Now. There is no such thing as impartiality in news coverage. Selection always involves value judgements of what is important, what should be emphasized, what can be ignored. The CBC piece chooses to ignore the serious threat of a fascist president to instead concentrate on benefits for nominally Canadian mining interests (even though as far as I know, international mining corporations registered in Canada to gain the benefit of sweetheart Canadian regulations for mining companies do not actually do much for the Canadian economy). They decided to select issues to concentrate on which relate to benefits for a tiny, mostly not even Canadian elite rather than issues relating to the serious worldwide threat of rising fascism which has impacts in Canada as well (eg, premier of Ontario hanging out with white supremacists). That's lousy journalism. Further, it's particularly bad since the CBC is supposed to be a PUBLIC broadcaster serving the public interest. If a broadcaster owned by billionaires publicizes news oriented towards the interests of billionaires, that is just our economic system at work, albeit a feature of our economic system which we should be wary of. If a broadcaster owned by the public publicizes news oriented towards the interests of (apparently fascism-friendly) billionaires, that is a betrayal.

This is just one more

This is just one more indication that the CBC is not a broadcaster to trust with any analysis that goes beyond the obvious. The right-wing surge in Brazil - a win for Canadian mining companies? Thanks for that in depth analysis, CBC. This isn't the only time CBC has a failed to provide viewers with an analysis that can be counted on. What about that recent in depth reporting CBC managed on the Trans Mountain pipeline when a reporter went around and asked non-indigenous folks near the pipeline what they thought of the project? To a person, interviewees were aglow with the possibility of their communities being sustained by the jobs being offered in connection with the pipeline. The reporter didn't question how many jobs were on offer, nor did he ask any of the interviewees to consider harm to the environment. I trust CBC less and less. Makes me wonder just whose oily pocket the broadcaster is in.

If you drill down deep enough

If you drill down deep enough - every modern, industrialised, citizen of the world - and most of the not yet beneficiaries/aspirants of the "system" automatically calculate "what is in it for me? This seems to be the resting point of the human brain and, probably, the seeds of its own demise.

In the current parlance, humans are still not "woke" to the consequences of even their least actions, nor to the devastation our species wreaks upon the planet. The perversion of the Darwinian concept "Survival of the fittest" from a simple biological truth to a dictat that drives human acquisitiveness is the essence of almost all the recognized systems of human thought.

Geneticists tell us that human reproduction as currently understood is, in a few million years doomed to failure as the male genome carries the fatal flaw of "diminishing returns". Nature, and evolution, may not wait that long to exterminate us. If we fail, the failure will be on us - the genus that refused to think.

Jay Rosen on CBC Bolsonaro story: 'The framing of the story was amoral'