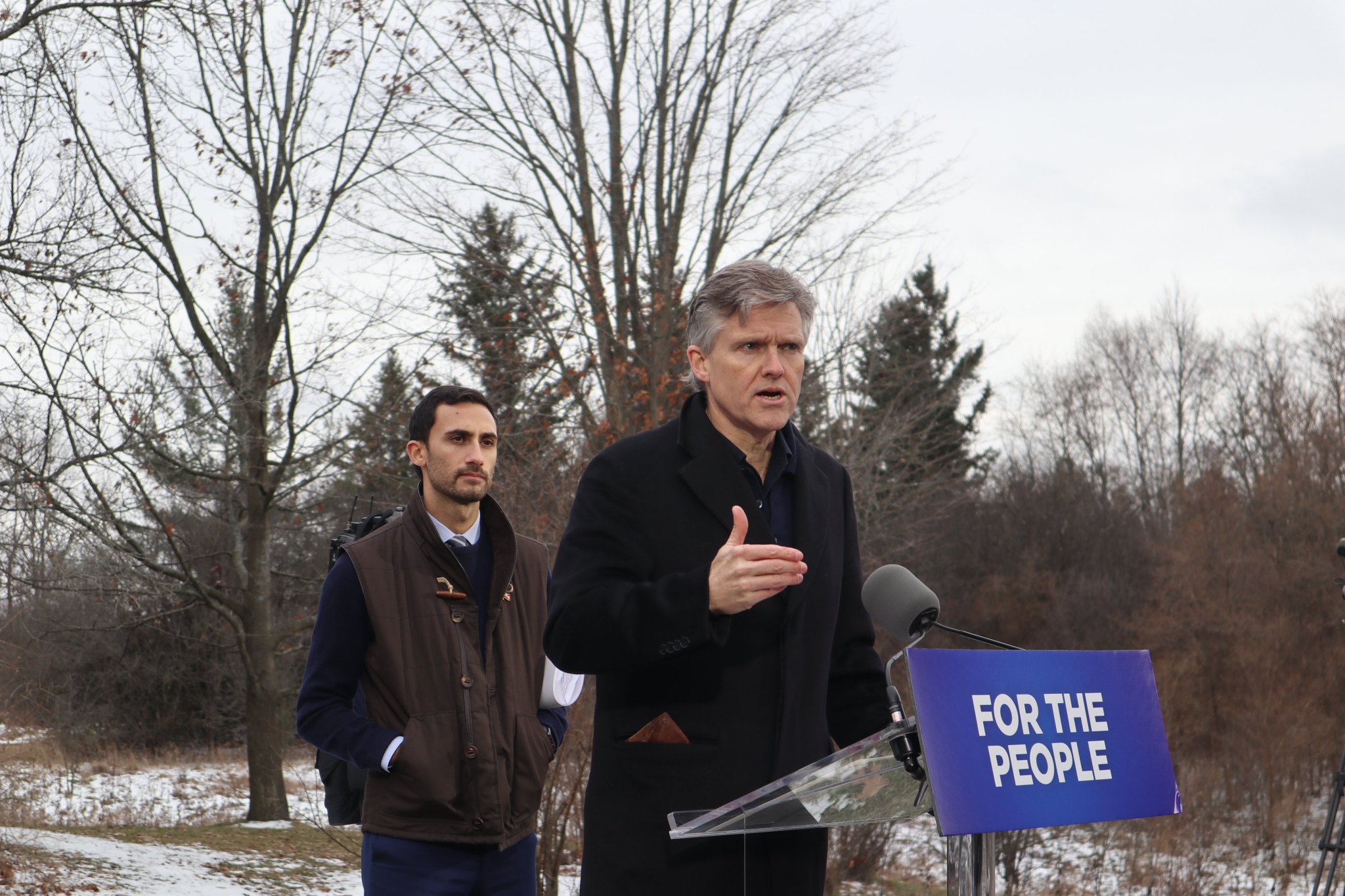 Ontario Environment Minister Rod Phillips unveiled a $500 million plan on Thursday that promised to cut the province's carbon pollution in line with Canada's obligations under the Paris climate agreement, but offered few details about how it would actually achieve these reductions.

“It’s a plan that makes a clean break from the status quo, and it’s a plan that balances a healthy environment and a healthy economy,” Phillips told reporters at the Cold Creek Conservation Park in Nobleton, Ontario. “Our plan will encourage individuals, families and businesses to take greater ownership of our shared environment while we work toward those shared objectives.”

The government plans to spend $400 million over four years through a new Ontario Carbon Trust. It includes $350 million that would leverage private investment in clean technologies at a 4:1 ratio. The details of the trust are still being finalized, so how much industries will pay into the fund "will depend on the final design and mandate of the trust," according to the plan.

Another $50 million is set aside for a reverse auction, modelled after Australia’s Emissions Reduction Fund, to encourage businesses, farmers and land owners to bid on government contracts to develop environmentally friendly practices and technologies that produce the lowest cost per tonne of greenhouse gas emissions. Climate experts, however, say that emissions are likely to continue to increase in Australia.

"The Ontario Carbon Trust should be able to leverage over $400 million to unlock over $1 billion of private capital, " the announcement said.

The remaining $100 million will be invested in green energy innovation and conservation efforts.

Few details were laid out on how the funds will work, but as promised, the new plan does not include a carbon price that the Ford government fiercely opposes. Instead, Phillips said it takes “a sensible, achievable approach,” which:

'We will hit those targets and we will do it without a carbon price:' Phillips

The 53-page plan, called the Preserving and Protecting our Environment for Future Generations: A Made-In-Ontario Environment Plan, comes months after Ontario Premier Doug Ford scrapped the province’s cap and trade system, which forced companies to pay for permits to emit GHGs as his first move in office. Ford called it the “worst tax ever.”

The climate plan was unveiled against a backdrop of an increasingly bitter political battle with the Trudeau government over carbon pricing. On Wednesday, Ford blamed the planned federal carbon tax for the closure of the GM Oshawa plant even though GM said nothing of the kind.

"It's really disappointing to see Premier Ford undo Ontario's climate action progress," McKenna said on her Facebook page. "Any serious climate plan includes a price on pollution: When pollution is free, there will be more of it...

"Canadians are feeling the impacts of climate change every day through extreme weather and impacts to their health. They expect their governments to act. I'm disappointed Premier Ford is going backwards, and that Andrew Scheer has no plan at all. Canadians deserve better."

Ontario is also joining Saskatchewan in a $30 million court battle against federal carbon pricing for provinces that don’t have their own. Ottawa bypassed the Ford government to invest $420 million from its Low Carbon Economy Fund directly to Ontario cities, hospitals, universities and businesses to help with emissions-reduction efforts.

Still, Phillips aligned the policy clearly with federal emissions reduction targets. In his remarks, Phillips said several times that Ontario was on track to achieve its Paris Agreement target to reduce emissions by 30 per cent below 2005 levels by 2030. He said that the province had “benchmarked ourselves against the international agreements” Canada is in. Ontario had already reduced its emissions by 22 per cent and is eight per cent away from achieving its goals.

"Our prime minister thought they were targets worthy of achieving and we agree,” Phillips said. “We will hit those targets and we will do it without a carbon price.”

“I’m hopeful that when they see that we are going to hit the targets that they agreed to, they’ll appreciate that the way that’s done,” he added. “And this dogma of having a carbon tax won’t be as important.” He explained that the former Ontario Liberal government of Kathleen Wynne and the Trudeau Liberals “have a different vision about the role of government and how it intervenes and effects economy.”

“As conservatives we don’t believe that,” he said. “We believe the markets drives these opportunities.”

Ironically, the plan began by lauding the efforts of previous governments in overseeing a 22 per cent reduction in Ontario’s emissions in the 13 years since 2005, while presenting a broad plan to reduce emissions by just eight per cent in the next 12 years.

But when asked how the province can reduce greenhouse gas emissions without putting a price on carbon, Phillips asked advocates of the pricing plan “how can they be so focused on just one solution when we're dealing with something this complicated?"

Phillips spoke from a an outdoor podium at the slightly snow-clad northern Ontario conservation park in Nobleton. There was a short smattering of applause and Phillips joked about it: "I think that was the leader of the Green Party who clapped for me, so thank you."

Despite the display of political camaraderie, Green Party leader and MPP Mike Schreiner was disappointed with the plan that was unveiled on Thursday. "We need a climate plan, not a litter-reduction plan. This is not a climate plan," he told reporters afterwards.

Asking Ontarians to pick up litter in the face of the climate crisis is like the US president asking Californians to rake leaves to prevent forest fires.#onpoli #NotAClimatePlan#ONClimatehttps://t.co/kT00OFAmRR pic.twitter.com/Gp6D7MEkDk

NDP MPP and energy critic Peter Tabun noted these reports in his remarking that the plan is "scandalously thin" and would take Ontario down "a path to disaster."

"These targets are totally reckless and take us into the danger zone that we don't want to be in," Tabuns told reporters. "If you have a forest on fire, worrying about an individual shrub is not enough...Under cap and trade you were generating billions of dollars a year to take action on climate change and their trust is what, $350 million over the next few years. The scale of what has to happen does not match at all."

Tabuns added that commending Ontario's alignment with Canada's commitment to the Paris agreement ignored the fact that "we need higher targets" to avoid the catastrophe detailed in the UN Intergovernmental Panel on Climate Change report, which warns there are 12 years left to take serious action before hitting dire consequences.

"We need higher targets, we need a consistent plan with investment by government and regulation by government that would actually substantially reduce emissions year over year," Tabuns said.

Schreiner agreed, adding that the plan would hurt Ontarians in the short and long run. "The bottom line is taxpayers are going to get hit three times with this plan," he said. Taxpayers will be paying polluters to reduce their emissions in the fund model Phillips laid out, Schreiner explained, and those polluters would then pass on the costs of pollution to consumers. "And they're going to get hit a third time because the plan is going to fail."

Ontario's environment comissioner noted in her September report that Ontario's climate polices were insufficient and that climate change has cost the average household $350 in the first six months of this year alone. "Those costs are only going to go up," Schreiner said. "If they were real Conservatives...they would use the marketplace, put a price on pollution and direct the money back to Ontarians."

The PC plan for the environment is not the plan we need. Please see my statement below. #onpoli #ONclimate pic.twitter.com/E5KX5Tv7jZ

Robin Edger, Ontario director at the Pembina Institute, said in a statement that the new climate plan "contains mainly aspirational statements and plans to make plans, without seriously demonstrating how the government will lead Ontario to a low-carbon economy."

Cathy Orlando, national director of Citizens’ Climate Lobby, said the plan endangered the climate progress made by Ontario cities, noting that "it starves them of funding for climate change solutions such as transit and building retrofits" and "it threatens municipal climate plans that rely on price signals from carbon pricing in order to succeed."

"This is Ontario abandoning the fight against climate change and actually making it harder for Canada to do it's part," said Greenpeace senior strategist Keith Stewart. "This is a plan to fail on climate change. Its a plan to have some good PR, perhaps. But its not a plan to actually reduce pollution."

"At a time when doctors, scientists, mother nature are telling us to go faster, this is a plan to not just go slower but to go in the wrong direction."

Editor's note: This article was updated at 11:29 p.m. ET on Nov. 29 with new comments from federal Environment and Climate Change Minister Catherine McKenna.

GHG emissions in Australia were going down until the new conservative government decided to scrap the carbon tax in 2014. The new administration adopted a system similar to the one that Doug Ford wants to implement in Ontario. Since then, emissions in Australia have been growing up again putting the country further away from meeting its emissions reductions target.
The "regressive" conservative party of Ontario has chosen a plan that doesn't work. They should go back to a policy that was working, it's called cap-and-trade.

As an Ontarian - what can I

As an Ontarian - what can I say? Government by fools and con-artists.