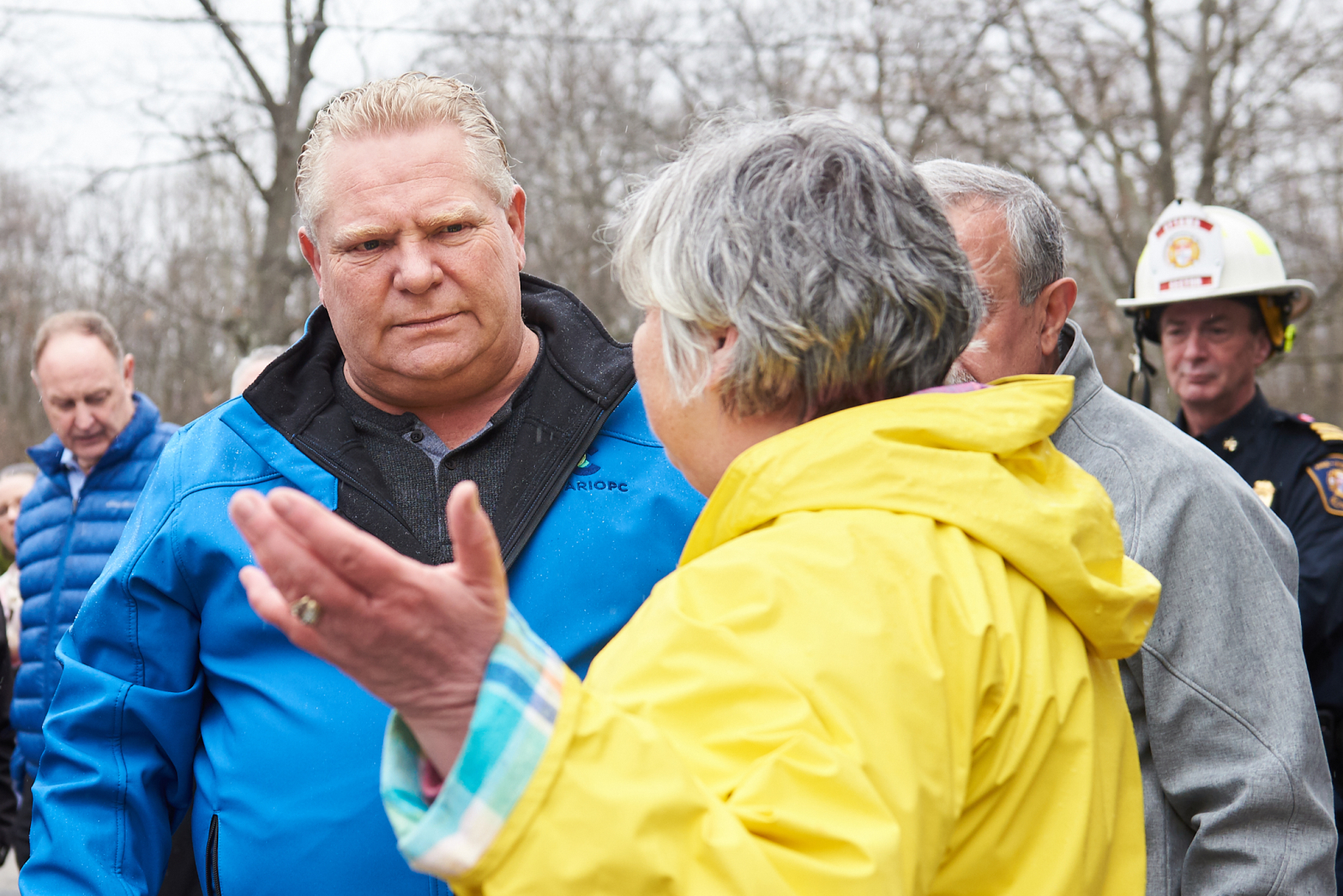 Ontario Premier Doug Ford speaks with a member of the public in a partially flooded area of Constance Bay northwest of Ottawa on April 26, 2019. Photo by Kamara Morozuk
Previous story
Next story

Four days after Doug Ford's government spelled out 20-pages of weakened protections for Ontario's species at risk in an omnibus housing bill, an 18,000-page report by over 450 scientists — who spent over three years creating a first exhaustive portrait of humanity's devastating impacts on nature as a result of rapid urban development — conveyed one shocking fact: over one million animal and plant species are threatened with extinction.

We can stop this, the United Nations Intergovernmental Science-Policy Platform on Biodiversity and Ecosystem Services (IPBES) report says, but it will take "transformative change" in every aspect of how humans interact with nature.

This change is not coming from the Doug Ford government, critics say, who are "sprinting the other way" by bolstering a status quo the UN assessment says desperately needs to change.

The Ford government is "sending in the bulldozers," says Greenpeace Canada's Shane Moffat, by giving way for developers to actively avoid species-at-risk protections. "The report really makes clear if we’re going to prevent this crisis of biodiversity, that means an end to business as usual ... We don’t see a sign of that in Ontario. In a way, what Doug Ford is doing is worse than business as usual."

Green Party Leader Mike Schreiner said the report — which was based on thousands of scientific studies, and is the most comprehensive look yet at the decline in biodiversity across the globe — is "frightening news." Among its long list of astonishing findings, the report found that three-quarters of the world’s land area has been significantly altered by humans and 85 percent of the world’s wetlands have vanished since the 18th century, leading to the largest mass extincting the world has seen since the age of the dinosaurs.

Schreiner says the fact that it is the Ford government's housing bill that guts endangered species protection suggests that "they don't understand how the loss of habitat and species is having a direct impact on our quality of life."

The loss of species and their habitats has dire impacts on the global ecosystem including the loss of biodiversity that provides natural protections against extreme weather events such as flooding or forest fires. Without that biodiversity, the world loses the natural systems that provide clean air, clean water and natural resources that sustain our way of life and our planet.

Schreiner gives an example of what this means in Ontario. Wetlands have been found to reduce the impacts of floods, absorb pollutants and improve water quality. In Ontario, the now-fired Environmental Commissioner found in her last report that 75 per cent of the wetlands in southern Ontario have been destroyed or lost entirely. That loss of habitat is "largely responsible for the flooding we are seeing in the province today," Schreiner said.

"If we’re going to continue to bulldoze, pave over, and destroy what the earth provides us for free… well, that's completely fiscally irresponsible and will have devastating impact on people’s lives," Schreiner said. "Why can't we just be strong enough to protect our environment?"

Species are now threatened with extinction, many within decades, more than ever before in human history.

How Doug Ford's government is weakening protections for endangered species

Ontario's Endangered Species Act was "a gold standard in North America," said Ontario Nature's Anne Bell, which was celebrated for its three foundational aspects: science-based listing, automatic protections of species and habitations, and mandatory recovery strategies and planning of habitat.

The Progressive Conservative government is set to change all this. It is bestowing on the provincial environment minister, currently Rod Phillips, sweeping powers to delay and obstruct habitat protection in order to construct more sprawl. Critics say that the overall direction of Bill 108, the More Homes, More Choice Act (which was released May 2), is to roll back protections for species at risk and make it easier for the development industry to proceed with activities that harm these species and their habitats. This includes:

Liberal MPP Nathalie Des Rosiers worries about the lack of details in these changes, including "how and whom will be able to avoid respecting the Endangered Species Act by paying into the Species At Risk Conservation Trust."

The act was rooted in "the presumption of protect before what you need to do," Des Rosiers said, which means that endangered or threatened animals and plants were protected while government and industry deliberated over how their protections interacted with development projects. The changes in Bill 108 are "too prescriptive," she said.

"We need to know more, but I think it's clear that this government, both on climate change and endangered species, is on the wrong side of history," she said. "They've decided their short-term tax cuts are more important than long-term environmental protections."

NDP environment critic Ian Arthur said the changes were "a gift to sprawl developers" and for "the small group of people who have the premier's ear."

"The scale of the level of change we need to do on a provincial, federal and planetary level is overwhelming," he said, calling the dire warnings in the UN report "a global tipping point."

That report projects that the loss of biodiversity will accelerate through 2050, unless countries drastically step up their conservation efforts, that we have "a moral duty" to protect our world, Des Rosier said. "Where is this government's moral duty?"

On Monday, Ontario Environment Minister Rod Phillips, who hasn't acknowledged the UN report publicly yet, responded to the landmark global report in an email to National Observer with three lines:

“The IPBES report highlights an important issue, and serves as a reminder of the impact of human activity on biodiversity and species at risk.

Ontario is committed to ensuring Ontario’s best-in-class endangered and threatened species protections include advice and species’ classifications from an independent scientific committee and modern approaches to enforcement and compliance; species and habitat protections; and recovery planning.

This is why our government is implementing the recommendations of the 10-year review of the Endangered Species Act, to improve outcomes for species at risk and their habitats using an independent science-based assessment process as well as including information obtained from community knowledge and Aboriginal traditional knowledge.”

But the recommendations spelled out in the Ford government's Bill 108 do not "improve outcomes," said Bell, Ontario Nature's director of conservation and education.

"In multiple ways, the government is planning to make it easier and faster for harmful activities (development projects, industrial activities, etc) to occur," she said.

There was already flexibility to get around the protections enacted by the Endangered Species Act by getting permits or agreements, as long as applicants could provide "adequate reparation" that was over and above any harm done to species at-risk, Bell explained. Bill 108 "opens the door and makes it easier, and faster, for development to proceed in habitats for species at risk,” she said.

A payment in lieu is "a get of jail" card for developers, Bell said. "That fund is based on destruction. Its premise is destruction."

Time and again, however, Phillips and the Environment Ministry have said that science will still be the driving force in the protections of endangered species in the province, and that the goal is to reduce red tape.

A ministry official told National Observer in an email that "the current Act doesn’t allow the most effective path to resolve these issues." The official said that at present, after an applicant looks for alternative methods to mitigate any harm to species at risk, they have to create a plan to benefit that species through habitat creation.

The official, who was speaking on a background basis to explain the changes, said that some species such as the Butternut tree and several bats are decreasing in number due to factors harder to control or mitigate, such as disease and competition from invasive species.

"Our changes would allow applicants who have considered alternatives and put in place mitigation measures to pay a charge to the Species At Risk Conservation Trust instead of completing other onerous requirements, such as expensive field surveys that could cost $30,000 per species. This would help enable positive outcomes for species that are decreasing due to disease, invasive species or other reasons by accumulating payments and leveraging the collective resources for more strategic, coordinated and larger scale actions," said the official.

But Bell says the government is misleading Ontarians, and going in the wrong direction by not recognizing that the status quo is the problem.

"Are people ready to accept that we have to sacrifice species at risk for short-term economic interests that benefit the few?" she asks. "One million species are at risk of extinction. When are we going to make our decisions based on our needs rather than our greeds?"

Every time we "harden" the

Every time we "harden" the surface of our planet (paving paradise) we imprison and destroy the vital, living, surface of our earth, all the essential micro-organisms on which the above ground layer of life, from grass, to trees, from frogs to princes, is utterly dependant. Better, we should build our homes on stilts so the micro - organisms can still survive. In fact, as our climate heats up and becomes ever more unstable we may well have to join the underworld to survive. Back to the troglodites!

The total lack of imagination that afflicts the "denying" fraternity in power (and they ARE all men) will certainly be the agency that drives life to extinction. I suppose, like tempestuous toddlers, if they can't continue to rule the world, they will destroy it for everyone/everything else.

Oh dear, after re-reading parts of this report - I am struck by the unnamed official's glib explanation of the "good" the act in question will do. It is so pitifully inadequate in addressing the complexities of the deleterious effect of human overpopulation, and worse, excessive consumption, has on our dying planet.

Dying, because we are consuming its resources at rates that are absolutely unsustainable; because we are contaminating and destroying the life giving properties of the painfull, slow accretion of a living surface for our chunk of rock. We are undoing in decades, the eons of evolution, the incredible adaptation of natural life that makes this place habitable. Humanity has never been satisfied with nature and seems doomed to destroy that which made our species possible.

This kind of thing is so

This kind of thing is so often framed as about "the economy" versus "the environment". But clearly it is not--"the economy", in terms of maximum utility overall, is obviously not served by messing up wetlands and so forth; there are huge public costs. Rather, this is about enriching a few private actors at the expense of the public good. But more broadly, that's the state under capitalism: Privatize profit, socialize cost and risk.

That's why Greens need a strong left analysis if they're to understand their own main issue; being "post-ideology" misses the point. (Leftists in turn need a strong environmental understanding; weak "OK, it's progressive so we'll check the box" thinking was never adequate but it's utterly indefensible now) Greens need to be left, leftists need to be green.