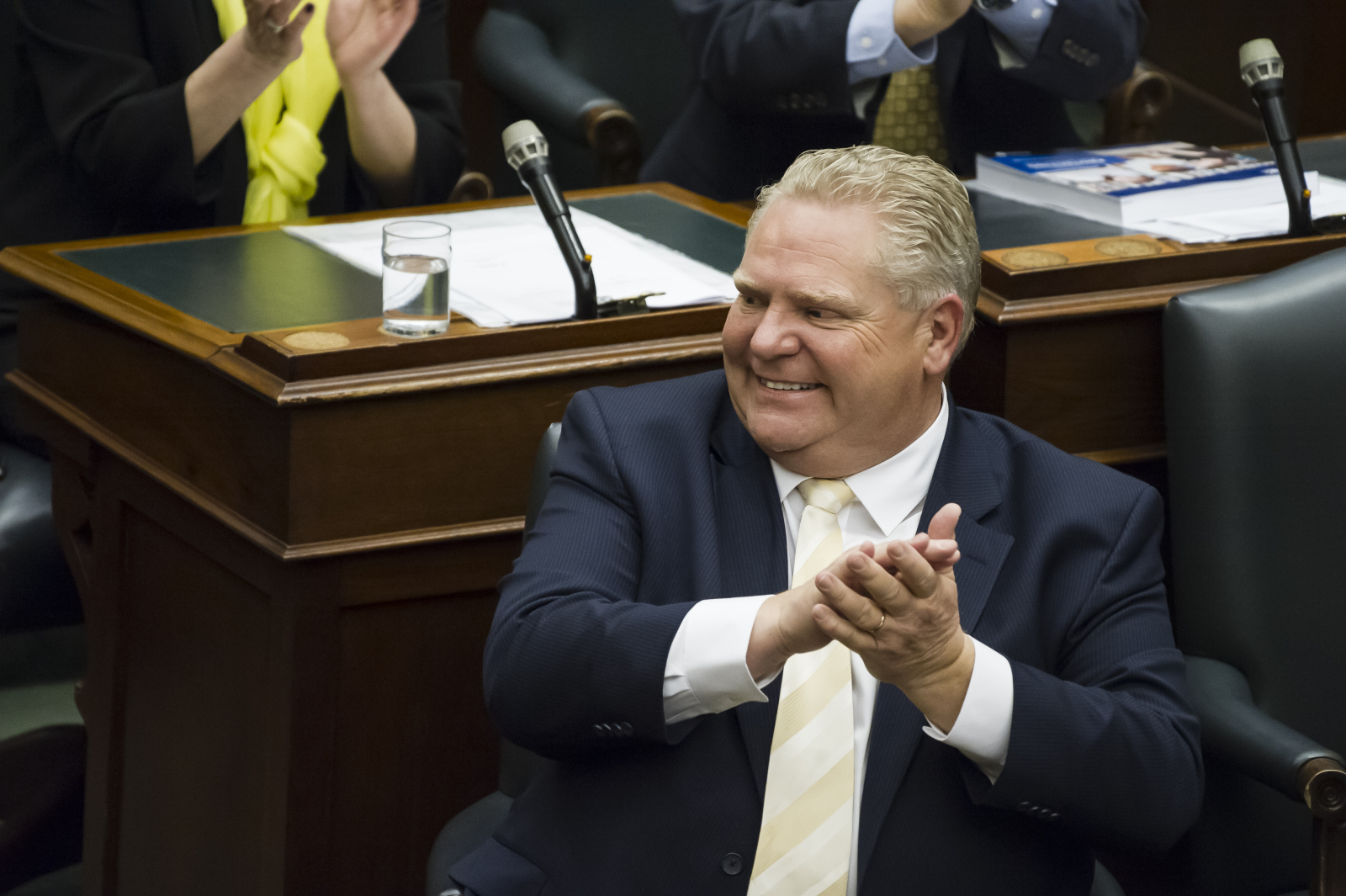 Premier Doug Ford's government is facing vehement opposition from municipalities across Ontario for proposing to weaken legislation protecting endangered species in order to allow mass development to occur in critical habitat for wildlife.

The changes were proposed in a housing bill, Bill 108, that proposes amendments to 15 laws, including 20-pages of sweeping changes to existing protections for endangered wildlife. These protections are spelled out under Schedule 5 of the legislation.

The proposed changes include the creation of a new fund that would allow developers to pay the equivalent of a tax, rather than taking steps to protect and restore habitat of species at risk. The government has also proposed to change the makeup of a scientific committee that reviews the status of species at risk, in order to allow people with no scientific expertise to join and provide scientific advice.

The Ontario municipalities of York, Muskoka Lakes, Oakville, Aurora, Archipelago and Lennox-Addington have all voiced their opposition to Bill 108 and passed motions or resolutions to that effect.

Aurora Mayor Tom Mrakas says his municipality was neither consulted nor informed that these changes were coming. He worries that the bill will eliminate the ability of local councils to make decisions about how their natural and wildlife areas are managed.

"At the end of the day, Aurora has a lot of green space in southern parts. We have protected habitats in the Oak Ridges Moraine and there are a lot of species in the area," he said in a phone call. "We need to ensure that we protect those species from harmful development that will take over the area."

Oakville council also opposes Ontario's proposed changes to Endangered Species Act. The city council passed a resolution Monday that urged the province to stop the advancement of Bill 108 and give municipalities more time to review the omnibus bill, comment on and consult with the government on changes to regulations.

The Town of Oakville has one of the most biodiverse environments in the province, home to 900 species of plants, 185 types of birds, 30 species of amphibians and reptiles, 29 types of mammals and 58 different kinds of fish. A number of these species are considered endangered and threatened.

Oakvile Mayor Rob Burton told National Observer that Bill 108 is indicated that Ontario is now under "a centralized authoritarian regime." He called Schedule 5 "pay to slay."

Bill 108 is scheduled to go to committee Friday. Only one day has been allocated for public input. It could pass as early as June 4, before the Ontario legislature adjourns for the summer on June 6.

Trakas will be unable to attend the committee meeting because he is attending the annual Federation of Canadian Municipalities gathering in Quebec City. (Burton is there as well.)

"So many elected officials won't be available tomorrow," Mrakas said. "I want to speak to the committee but I'm not available to do that. Where is the transparency, the willingness to work with municipalities then?"

Burton says he will join "a rebel alliance" to the Ford government as a gathering of mayors, civil societies, environmental activists and more at Laurier University on June 8.

"I am alarmed at this unconsultative, one-sided, uninformed set of sweeping, draconian measures that will only harm communities and the environment, and will not achieve their stated goals," Burton said. "It's a joke. it's a travesty."

Ontario mayors aren't the only ones rallying against Schedule 5. Over 75 scientists across North America have signed and sent a letter to Environment Minister Rod Phillips, urging him to reconsider and maintain a species at risk recovery program that was "independent and expert-based."

The letter notes that the group of experts were "dismayed" to hear the Ontario government had taken "a considerable step backwards with the inclusion of so many amendments to Ontario's landmark Endangered Species Act in Bill 108 - an omnibus bill about housing."

The scientists make strong reference to the first comprehensive UN biodiversity report that found over one million species were at risk of extinction due to human activity.

The letter notes that "at 1 million km2, Ontario is bigger than many countries, and harbours some of the most unfragmented habitats left on the planet."

"Ontario has a global obligation to protect all (species at risk) within is borders, even in cases where species' total ranges extend beyond Ontario's borders. Ontario cannot simply pass the responsibility to other provinces and countries."

Julee Boan, Ontario's Nature's Boreal Program Manager, told National Observer, it was imperative the government ensure that "the diagnosis of species at risk was kept separate from their treatment." The process of identifying endangered species had to be based in science to ensure they could be protected properly.

By offering the loosened protections in a broad housing bill, Boan said the government was trying to hide the importance of this decision, and misleading Ontarians by saying the proposed changes would improve outcomes for species at risk.

"If the province goes ahead with these proposed changes, their new Endangered Species Act will lack scientific credibility," she said. "We could actually lose species from Ontario entirely."

(Note: This list was created with the help of Julee Boan, Ontario's Nature's Boreal Program Manager.)

We need to make greedy

We need to make greedy ignoramuses extinct in government ranks, not sacrifice threatened plant and animal species, which help support our biosphere and biodiversity. Thank you to anyone who votes or acts against these planned acts of depraved indifference and ignorance.

The Conservatives belong to a

The Conservatives belong to a global right wing organization chaired by Stephen Harper. (Members include the US Republican Party and the Russian Federation Union of Right Forces etc.) This group has partnered with Facebook and is running and supporting member parties in elections. Their ideologies support family first and rule of law a threat. www.IDU.org

I guess you live in a tree,

I guess you live in a tree, no house for you.lol

So its all out in the open

So its all out in the open now isn't it? Who Canadian conservatives are, what they value, and what they don't value.........how they intend to govern, from the authoritarian centre, and how they learned from Harper how to do it.....omnibus bills......so that the loss of habitat and species protection can be hidden in a bill on 'housing'. Pretty clever what? To pit Canadians need for affordable housing, against at risk species need for protection? Guess we'll all just agree someone has to be thrown under the bus..and get on with our favourite pass time: whining about taxes.

That such cavalier tricks keep coming, during this time of climate emergency, should make all rational people realize how very late in the game it is...........how much there is to do, and to date, how little we've accomplished.

Who votes for these know it alls?

I voted for Doug Ford's

I voted for Doug Ford's conservatives. I just find Canadian politics to be in shambles. The Liberal party is so corrupt and will spend like crazy to try and keep everyone happy. I don't even consider the socialist NDP as an option usually. I'm just really disappointed in the PC party because even though they are making the tough choice fiscally to ensure our grandchildren also get social services, it's a shame that they still turn a blind eye to scientific fact. This was one of my biggest issues with the Harper gov't (btw, I typically vote Liberal federally). This is just rediculous. Our grandchildren's social services won't matter if the environment is unlivable. How can these guys not understand the importance of a sustainable ecosystem. I just wish there was a real option in Ontario instead of trying to pick the lesser of all evils.

Good news! You too could be

Good news! You too could be instrumental in creating a real option in Ontario. Vote Green!

Well said there is no real

Well said there is no real choice unfortunately in Ontario. I'm not a believer in the seat system either it takes too long for a party with newer views to get anywhere. I believe true democracy died a long time ago when the people vote a party into power it should be that party making the decisions, and having the power the other parties can go home back to their normal jobs and try again in 4 years. There is far too much wasted money in the current political system. If we truly want better social services and a great future for our kids or grand kids all the money could be there if we would cut back on the amount of money being spent on all the parties being in one room bickering the entire time with nothing ever getting done for the first 2 years of every term.