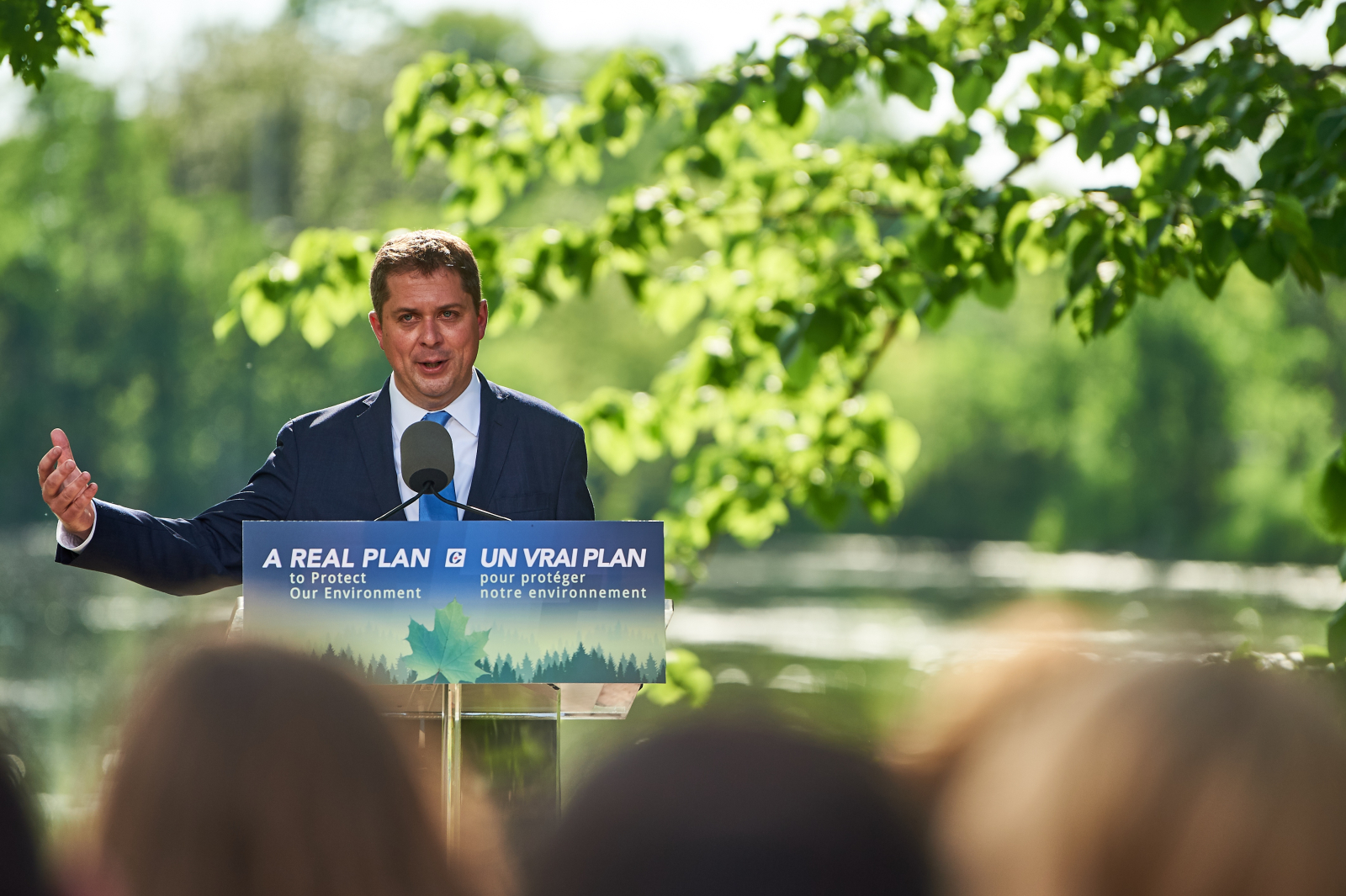 The Conservative Party released a vague, industry-friendly plan Wednesday to combat climate change and lower Canada’s carbon pollution that it says will allow the country to meet its international Paris Agreement targets.

The plan, presented in a glossy, 60-page booklet, is an attempt to shift the environmental focus away from the Trudeau government’s carbon pricing system, and towards other initiatives, such as requiring firms to pay for clean technology, reforming air quality regulations, and providing new tax deductions for industries that can cut emissions in foreign countries.

Conservative Leader Andrew Scheer says he could do a better job of fighting climate change than Prime Minister Justin Trudeau, and ensure that Canada achieves its target to lower annual emissions that it originally set under former prime minister Stephen Harper at international climate change negotiations in 2015 in Paris.

"Under the Conservative plan, it will not be free to pollute — and unlike the Liberal scheme, there will be no sweetheart deals for anybody," said Scheer in prepared remarks.

"However, rather than simply funneling money to the government as the Liberal plan dictates, emitters who exceed our limits will be required to invest in technology that (will) lower emissions to fight climate change."

Scheer’s plan does not project the amount by which each proposed initiative would lower Canada’s carbon pollution.

Party officials speaking on background could not offer any supplementary material or academic studies that examine the proposals’ effectiveness in terms of impact on pollution.

Asked by National Observer if the Conservatives were sitting on internal projections showing how much each proposed initiative would cut pollution, Scheer didn't answer directly.

"We have done a lot of analysis," he said. "We have talked to a lot of stakeholders and experts, and we are very confident that this approach will give Canada the best chance of achieving those Paris targets."

The Tory plan, added Scheer, "focuses on technology, not taxes. We are very confident that the development that comes with that" will help lower emissions.

Scheer was asked several times by reporters at a press conference in Chelsea, Que. where he announced his plan, whether his party had any estimates of emissions reductions. He responded that the Tory plan "gives Canada the best possible chance" of meeting the Paris targets.

A Real Plan to Protect Our Environment balances the need to fight climate change by lowering emissions, without a carbon tax, with our core Conservative promise of leaving more money in Canadians’ pockets and letting them get ahead. WATCH LIVE: https://t.co/jsHxnT5MED

One of Scheer’s central approaches to reducing emissions is what he is calling Green Investment Standards, where “major emitters” must lower their carbon pollution to a standard that would be set up for their industry.

For every tonne of greenhouse gas in excess of the limit, polluters will be required to invest a set amount, currently unspecified, into “research, development and adoption of emission-reducing technology related to their industry.”

The plan gives several examples of what this could look like, such as Canadian green-bonds, university or college programs that focus on clean tech, or startups working on carbon-capture or waste-heat-recovery technology.

To ensure these investments “reduce harmful emissions,” the plan includes creating a “certification process for all investments” called the Green Investment Standards Certification, that would require a “technical assessment.”

The approach is similar to recommended actions from the Canadian Association of Petroleum Producers (CAPP), Canada’s largest oil lobby group, which published a list of recommendations for the 2019 election on June 3.

CAPP’s recommendation is for a “large-emitter framework that prioritizes investment in technology and emissions reduction and achieves results in a cost-effective manner that protects competitiveness.”

Large polluters are already paying millions of dollars on environmental and clean technology research and development. Party officials said these firms could continue investing these dollars in the years to come, as long as they get certified.

The whole program would be subjected to “an auditing function” to ensure polluters are complying with regulations.

But some environmental advocates say these types of offset programs are virtually impossible to track and far less transparent than a public, economy-wide price on pollution.

Talk about red tape? Rather than allow trading of emissions credits to provide an incentive for innovation, this plan allows one company to invest in another's facility to receive some credit which is worth some amount that we don't yet know, assuming it gets certified?

"Talk about red tape," tweeted Andrew Leach, an energy and environmental economist at the University of Alberta.

"Rather than allow trading of emissions credits to provide an incentive for innovation, this plan allows one company to invest in another's facility to receive some credit which is worth some amount that we don't yet know, assuming it gets certified."

Dave Sawyer, an environmental economist at Carleton University, tweeted that "we could very well be in higher cost, less reduction territory with this plan."

The plan also suggests that a Conservative government would increase the amount of facilities that would fall under the category of being a major emitter and subject to new regulations. It would do this by redefining this category to include more facilities with lower levels of annual carbon pollution.

However, officials could not confirm whether a Conservative government would keep the Liberals’ output-based system, a separate component from its fuels charge, in place.

Several environmental groups, including Greenpeace Canada, Stand.Earth, and Clean Energy Canada, decried the Conservative announcement, saying it would not do enough to address the climate crisis, possibly making it worse.

Federal Environment and Climate Change Minister Catherine McKenna, the Liberal MP for the riding of Ottawa Centre, described it as a "fake plan," while explaining that Canada needs to demonstrate what it is doing to reduce domestic emissions through measures such as carbon pricing, as opposed to focusing on getting credit for exporting clean energy technologies.

NDP MP Tracey Ramsey, who represents the Ontario riding of Essex, said that the Scheer announcement lacked details in a number of areas, including how to support workers at fossil fuel companies who are likely to lose their jobs as the planet transitions toward clean energy.

Ramsey and Green Leader Elizabeth May said they were pleased to see more debate at the federal level about how to address the changing climate. But May also argued that Scheer's proposal to increase production and exports of natural gas to displace coal in China, was not going to help the climate as she said it would accelerate methane emissions mainly from fracking that would have the same carbon footprint as coal.

"Now we have an election coming up," May said on CTV. "We've got parties putting forward serious detailed plans — the Green party's Mission Possible, the NDP's plan, the Liberal plan, and now the Conservative plan — that informed citizens can take apart and compare, and maybe we can actually start figuring out what must be done, instead of just throwing brickbats at each other."

And as Andrew Scheer wrapped up his climate change policy plan our panel of MPs are here with their immediate reaction.

One major criticism for every MP (but not the Conservative): a lack of concrete detail and procedure.#ctvpp #cdnpoli

Under a section called “combating air pollution,” Scheer commits to “modernize” air quality standards and regulations, as well as “study the contribution that Canada’s landscape makes to global emissions.”

“We will work to combat air pollution, protect our waters and oceans, and take action on plastics and waste,” reads the plan. “We will ensure that our environmental laws are enforced so everyone is held accountable for their actions.”

Another initiative is to create a two-year Green Homes Tax Credit for homeowners to pay for energy retrofits. Under the plan, Canadians would receive a 20 per cent refundable income tax credit for green improvements to homes over $1,000 and up to $20,000.

The plan also has several conservation-related commitments, including expanding protected areas, completing the Canadian Wetland Inventory, and examining whether to create an “incentives-based program” for restoring critical habitats.

Scheer would also ban plastics waste exports unless there are recycling commitments, and “work with producers to minimize the plastic packaging of products.”

Canada can play a key role on the world stage if Canadians ‘vote for energy’: https://t.co/Y8W5PEA40g #VoteEnergy #Canada #economy

Scheer’s plan assumes fossil fuel demand will continue to rise. It suggests that “Canada cannot let that demand be filled by others,” and says it would make the country a “sought-after supplier” for oil and gas “while lowering emissions worldwide by replacing dirtier products.”

It asserts that Canada should export more oil and gas in order to replace “dirtier foreign energy sources.”

“It is has been well-established that natural gas, like (liquefied natural gas) is a cleaner source of reliable energy than coal. Exporting Canadian LNG to replace coal can lower global emissions.”

The plan provides no details for how this would actually happen.

Scheer’s plan assumes fossil fuel demand will continue to rise. It suggests that “Canada cannot let that demand be filled by others.” Photo by Kamara Morozuk

CAPP also included a recommendation in its plan to allow “Canada’s oil and natural gas resources to play an international role in generating net emissions reductions and obtain offset credits for Canada.”

Coal is the most emissions-intensive fossil fuel compared to oil and natural gas. But the chief component of natural gas, methane, is 86 times as powerful as carbon dioxide in trapping heat in the atmosphere over a 20-year period.

The fossil fuel industry is responsible for much of Canada's methane emissions, as oil and gas operations flare it off, vent it or accidentally leak it from faulty equipment. Studies have shown that this leakage has been much higher than previously thought.

Editor's note: This article was updated at 10:15 p.m. ET on June 19, 2019 with additional photos and reaction from the federal Liberals, NDP and Greens and other background information.

His plan does not seem to

His plan does not seem to mention any encouragement for people to buy zero emission vehicles.

I am, without any evidence,

I am, without any evidence, 100 percent sure that the oilpatch lobbyists wrote his anti-carbon tax tirade climate "plan." Don't forget his secret closed door meetings.