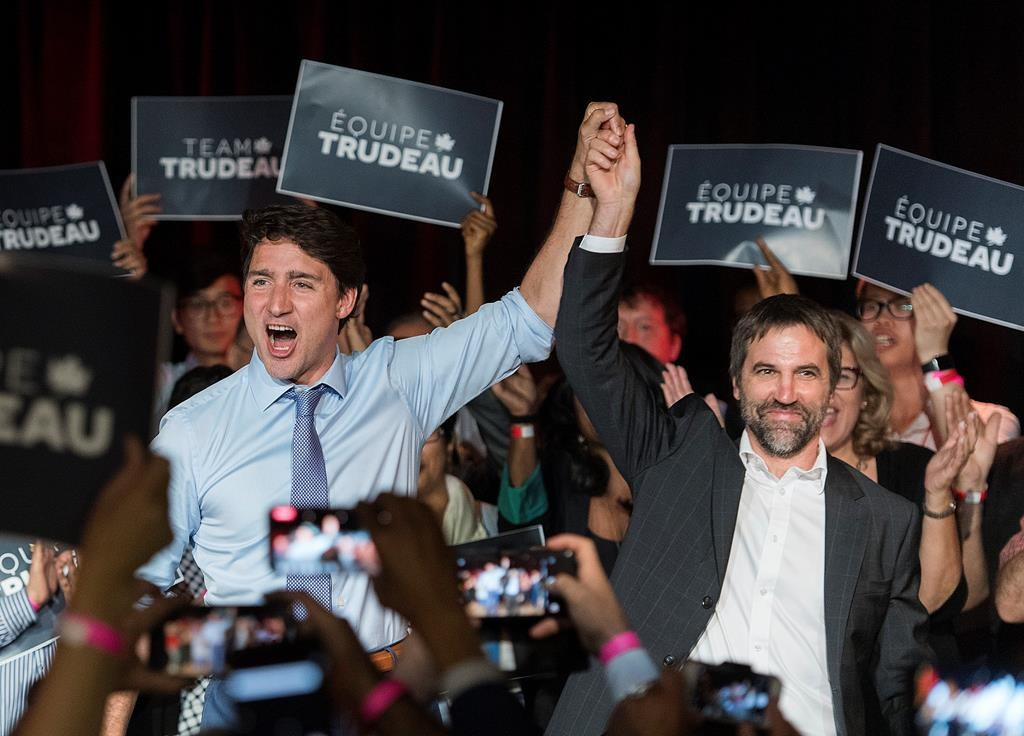 Prime Minister Justin Trudeau raises the hand of Steven Guilbeault, a well-known environmental activist during an event in Montreal on Wednesday to launch his candidacy for the Liberals. Photo by Graham Hughes, The Canadian Press
Previous story
Next story

Within a few minutes of Prime Minister Justin Trudeau's speech Wednesday night introducing his newest candidate for the fall election, a protester lifted up a sign and began screaming anti-pipeline slogans.

The crowd of roughly 150 people went silent. The female protester demanded Trudeau respect Indigenous sovereignty and stop the expansion of the Trans Mountain oil pipeline, which the federal government bought for $4.5 billion.

The crowd roared in approval but Trudeau's new recruit, well-known and respected environmental activist, Steven Guilbeault, did not clap. He stared into the audience with a stern look on his face.

Guilbeault in 1993 helped found a major environmental advocacy group in Quebec called Equiterre. The activist also worked for Greenpeace for ten years before returning to Equiterre as its director and spokesman in 2007.

He is also against Trans Mountain. But he thinks he can do more to fight climate change inside the Liberal party than outside it.

"I understand that in order to advance things, you need to compromise," Guilbeault said in the east-end Montreal riding of Laurier—Sainte-Marie.

"I find in the Liberal party everything I need to continue the fight against climate change."

Guilbeault will be a star candidate for the Liberals. The party hopes his name recognition and environmentalist bona fides will allow it to take the Laurier seat away from the NDP and increase the Liberals' presence in Quebec.

The riding bordering the St. Lawrence River has been NDP since 2011. Before that, it was the stronghold of former Bloc Quebecois leader Gilles Duceppe. The Liberals haven't held Laurier since 1988.

The crowd roared in approval but Trudeau's new recruit, well-known and respected environmental activist, Steven Guilbeault, did not clap. He stared into the audience with a stern look on his face. #cdnpoli

Laurier is important for the Liberals, who are looking at the NDP's 15 seats in the province as a way to help them win the October election. The riding is urban, bilingual and slightly poorer than the provincial average.

Guilbeault has shown throughout his career that he isn't the stereotypical anti-capitalist, environmental activist. He's worked as a strategic consultant for a major venture capitalist fund that invests in clean technology and other environmentally conscious industries.

"I did it for 25 years," he told reporters after his moment on stage with Trudeau.

"Being outside. Proposing ideas and criticizing. I think it's time for me to take the next step and try and change things from the inside. And that's what I'm going to do."

His opponents have already attempted to paint him as a environmental turn coat and sellout.

Gerard Deltell, Conservative MP from Quebec, told The Canadian Press earlier in the week that the Liberals represent the values Guilbeault once rejected.

"This man used to spend his life giving advice to everyone as an environmental activist and he's now ready to make all the compromises to become a politician in the Liberal party."

Guilbeault said he had no time for Tory attacks.

"Sincerely, the criticism from the Conservative party is the last on my list of priorities," he said. "Really. The last."

Outside the venue where Trudeau introduced Guilbeault, a handful of protesters held signs denouncing the Liberals and their stance on pipelines. Environmental activist Robert McBryde, 67, said Guilbeault used to inspire him.

Now, the 67-year-old says Guilbeault is a "sellout."

"If you support something that betrays all of your principles it's pointless," he said about Guilbeault's stance on pipelines.

"I can't speak for the motivation of Mr. Guilbeault; I am just thoroughly disappointed in what he's doing. I think it's absurd."

Laurel Thompson, 73, said Guilbeault's candidacy is good for him and for the Liberals, but not for the environmental movement.

"He think's he'll be whispering in Trudeau's ear," she said. "But it's not going to work."

I too, am disappointed with

I too, am disappointed with Guilbeault’s decision. I don’t see this as a sell-out, but a ‘serious case’ of political naïveté. What he just doesn’t understand is that Trudeau receives advice (marching orders) from the members of the PMO, global corporations and Industry lobbyists. Trudeau is completely owned by the Tar Sands Industry and he will not reduce extraction of Tar Sands junk oil even though this is threatening civilization, and of course, also threatening his children’s future. What a gift this is for Trudeau who can march out ‘his’ environmentalist whenever convenient. They can ‘whisper into each other’s ears’ hold hands and laugh together. Sadly though, Guilbeault will be used only for the PM’s benefit, and in the process, will lose touch with his colleagues and there will be one less committed environmental leader out there working alongside the rest of us.

Do the names Jody Wilson

Do the names Jody Wilson Raybould and Jean Philpott mean anything? Seems they found out how welcoming the Liberals are to progress and change.

I admire Guilbeault. I do not

I admire Guilbeault. I do not believe he is naive. I hope it is still possible to act, as an MP, to influence a party platform and to hold leaders to account from within. I completely agree with what other commenters have said about the power fossil fuel industries (and other corporate bodies) have in the Liberal party. That malignant power will not be diminished unless we can elect members who will fight to do so. In Canada we do not vote for a prime minister. We vote for the best MP in our riding. If I were in Guilbeault’s riding, I would vote for him. If I were in Jody Wilson Raybould’s riding, I would vote for her. Similarly, I would vote for Charlie Angus ( NDP) if I were in his riding. In my own riding, I will vote Liberal, because I greatly respect our Liberal candidate. We need to occupy the House of Commons with people who understand climate change, inequality, and corporate power and will oppose them with intelligence and passion. I hope Guilbeault wins and brings his very considerable gifts to government.