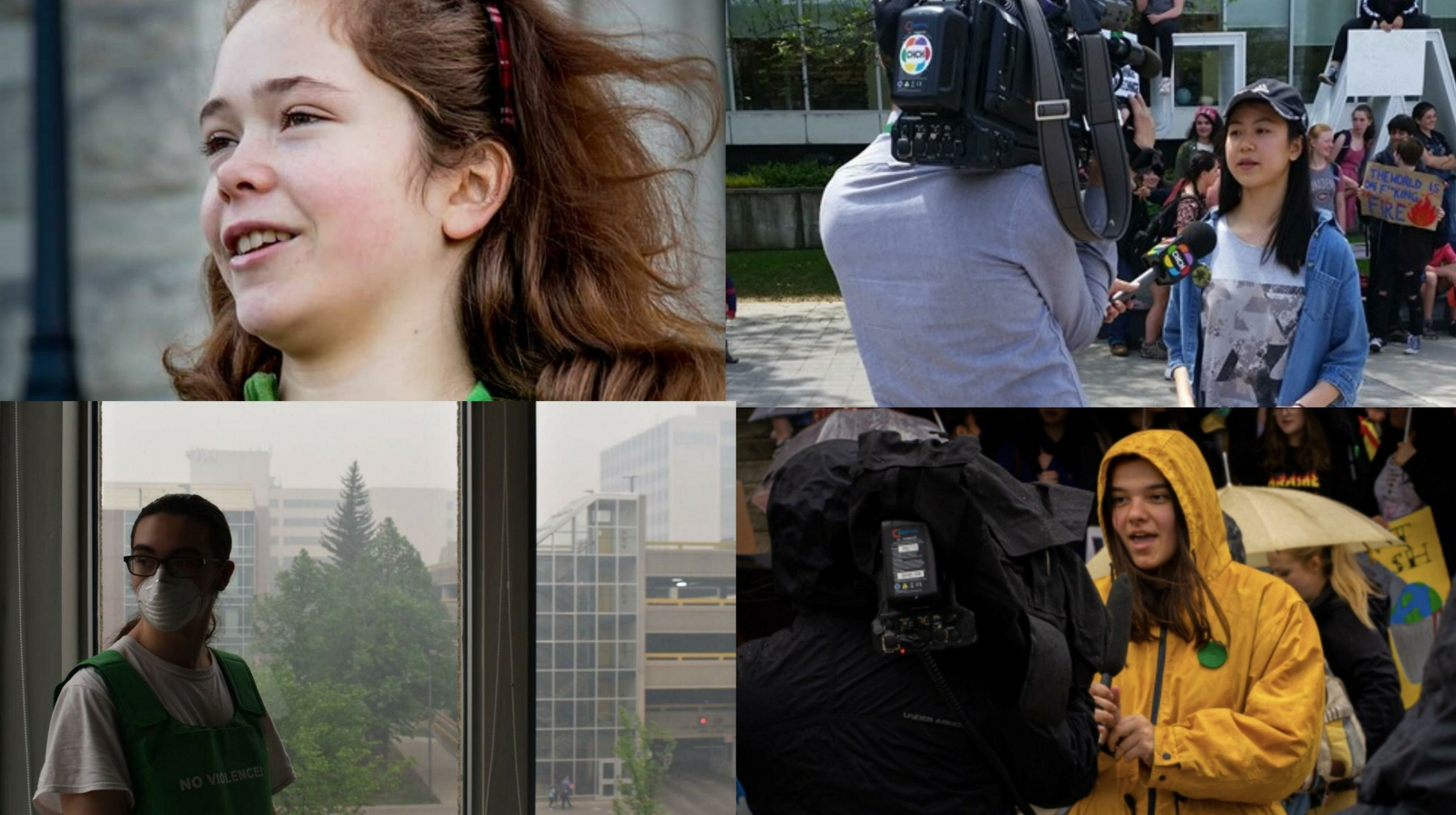 The corporation linked to the Trans Mountain pipeline expansion project demanded a group of teenagers cover their legal bills — before promptly changing its mind without explanation.

Youth Stop TMX, a group made up of Olivier Adkin-Kaya, 18; Lena Andres, 17; Nina Tran, 18; and Rebecca Wolf Gage, 13, had applied for judicial review of the pipeline project, arguing that it violates their inherent rights to life, liberty, security of person and equality.

The Federal Court of Appeal dismissed their application on Sept. 4, and Trans Mountain Pipeline ULC, a general partner of the system now owned and operated by the Government of Canada, demanded these four teenagers cover its legal costs. The court granted the request.

But within a couple of days, after National Observer had asked questions, Trans Mountain informed the teens’ legal counsel that it had changed its mind and would not be pursuing costs after all.

They did not say in time for deadline why they had changed their mind.

“This pipeline — and the oil that will flow through it — is destroying my future,” Wolf Gage said in a Sept. 4 statement. “Now the government-owned pipeline company wants us to pay their legal bills? We won’t stop defending our right to a healthy atmosphere and safe future until we get a healthy planet for all generations.”

@ElizabethMay The Federal Court of Appeal has denied 4 youth climate strikers from across Canada the opportunity to bring their constitutional challenge to the Trans Mountain Pipeline Expansion project. In doing so the court also ordered the youth to pay TM's legal costs.

TMX backs off in unsigned email

The group is one of 12 petitioners who sought to challenge Prime Minister Justin Trudeau's second approval of the Trans Mountain expansion project. It's the only group to which Trans Mountain and the Crown responded, but the Crown did not ask that the teens cover their costs.

The Federal Court of Appeal dismissed the application and stated in its Sep. 4 ruling that "the respondent, Trans Mountain Pipeline ULC, asked for its costs and it is entitled to them."

One of the lawyers for Youth Stop TMX, Erin Gray, told National Observer that such a demand was “egregious.”

She said at the time that she wasn't sure of the costs yet and wouldn’t know until Trans Mountain drafted a bill.

The four activists are receiving legal counsel at a discounted rate and have launched a GoFundMe campaign to cover their own costs. Right now, the goal is $6,000, which they thought they would have to increase once they received a bill from Trans Mountain. In 2018, the pipeline corporation reported revenues of $137.8 million.

The morning of Sept. 6, Gray was still under the impression that Trans Mountain would pursue costs. The corporation hadn’t responded to any requests for comment from National Observer from the prior two days.

That afternoon, Trans Mountain sent an unsigned email to National Observer from its communications account that stated "Trans Mountain will not be pursuing costs."

The teens argued their constitutional rights were violated by “any project that exacerbates climate change” and risks their future, Gray said.

The court dismissed the group’s petition due to relitigation laws. Justice David Stratas explained that arguments can’t be advanced in a later, second proceeding if they were raised, or even “could have been raised,” in the first hearing.

This includes any issues around environmental factors, greenhouse gas emissions, the risk of oil spills and the economics of the project.

The youth activists still expressed discontent at these legal restrictions. “The denial of our request for judicial review silences youth voices,” Andres said.

They pointed out that during the first hearing they were between the ages of 10 and 15 and could not have realistically petitioned the court.

The six petitions the federal court of appeal accepted were from First Nations and will focus narrowly on the issue of consultation from Aug. 30, 2018, when the court ruled that consultation had been inadequate and the government had more work to do, up to Jun. 18, 2019, the day the government approved the pipeline.

The court explained this is also mostly due to relitigation laws: the First Nations can’t make any arguments around climate change and environmental impacts that were argued in the first hearing or could have been argued.

Rueben George from Tsleil-Waututh Nation said he was happy the court will listen again, but he’s also concerned they will only listen to arguments around consultation.

To him, “consultation is talking about all the issues,” which includes climate change and potential impacts on endangered species and habitats.

“Dissatisfaction, disappointment or disagreement with the outcome reached after consultation is not enough to trigger a breach of the duty,” Stratas wrote in the federal court decision.

The court also says Indigenous people don’t get to give or withhold consent. Thanks to the Senate killing Bill 262, we’re back to the old concept of “meaningful consultation,” as the courts have defined it up until now.

One new argument that Tsleil-Waututh made in its petition was that the government is in a conflict of interest since Trudeau gave the order to purchase the pipeline in 2018. Stratas wrote this legal argument is “flawed.”

This means that while Trudeau’s Cabinet is the decision-maker and directed the state to purchase the pipeline, the Cabinet itself is not the owner. The state is the owner and therefore, according to the court, is not in a conflict of interest.

“It will be a challenge,” he said. “But I’m still confident in the Canadian Constitution protecting our Indigenous rights.”

The office of Natural Resources Minister Amarjeet Sohi told National Observer it remains confident the government took “the necessary steps to get this right” and they are “fully prepared” to defend their decision in court.

Trans Mountain said in a statement it plans to continue with construction as planned because the cases “do not in and of themselves negate the pre-existing approvals provided by those governmental authorities until and unless the court rules otherwise.”

Making people under 19 cover the legal costs...Trans Mountain is always finding new ways to keep Ottawa on the wrong side of world history.

Justice is the wrong term for

Justice is the wrong term for the purpose and existence of the legal systems of the world. At the moment I can't think of the proper word - but "justice" in any aspect of its definition, is not what the system produces - or maybe some pale simulacrum of it.

In the realm of human emotion, justice is actually vengeance, payment for wrongs committed. The biblical "eye for an eye" is the real balance point for emotional justice. Evidently, in the modern world, the state has developed the "impersonal/impartial" system of jurisprudence that is supposed to replace vengeance, retribution, or centuries long feuds. In theory and in practice it is a negotiated settlement, one that is supposed to assuage the grievances of the victim and mete out finely judged and balanced punishment to the malefactor. This compromise rarely satisfies either party and neither party would call it "justice".

In truth the concept of justice is like a mirage that keeps retreating as one pursues it. "justice", if one parses all the global histories of it can generally be described as being achieved by the party willing to expend the most money, effort and time. Sometimes the "winning" party achieves only a box full of ashes.

"This means that while

"This means that while Trudeau’s Cabinet is the decision-maker and directed the state to purchase the pipeline, the Cabinet itself is not the owner. The state is the owner and therefore, according to the court, is not in a conflict of interest."

This is a ridiculous splitting of hairs. The owners of the pipeline, all Canadians, had no say over the purchase, nor did we have any idea, when voting in the last federal election, that we could be on the hook for it.. What, we have to take the country or the electorate to court to contest conflict of interest? Nonsense. Our elected legislators and keepers of the treasury are our proxies, so as our legal representatives, they are fully responsible, on our behalf, for answering to the conflict. What a bafflegab, slippery dodging of responsibility for even being responsible, all couched in language they think most couldn't begin to understand -- insults upon insults.

Truly, it's a step beyond "My

Truly, it's a step beyond "My hand made me do it," to "My hand did it, I didn't."
It's been nearly 30 years now since I first saw laws passed to make it so there was no avenue of recourse against lawmakers (leaders, cabinet ministers, individual politicians, and the entire bureaucracy). They are as exempt as kings ... whose armies cannot turn against them.

Far from ridiculous, it is a

Far from ridiculous, it is a fundamental distinction in our legal framework. You and I now "own" the pipeline. The government (G-i-C) steers the ship.

WRT relitigation laws, Justice David Stratas notes that arguments can’t be advanced in a later, second proceeding if they were raised, or even “could have been raised,” in the first hearing. However the downstream climate change impacts was disallowed from the outset of the NEB process. These litigants raised important legitimate questions regarding the health impacts of climate change, impacts that have not been heard by the court.