Donald Trump has few friends left in Canada. What happens if he wins? 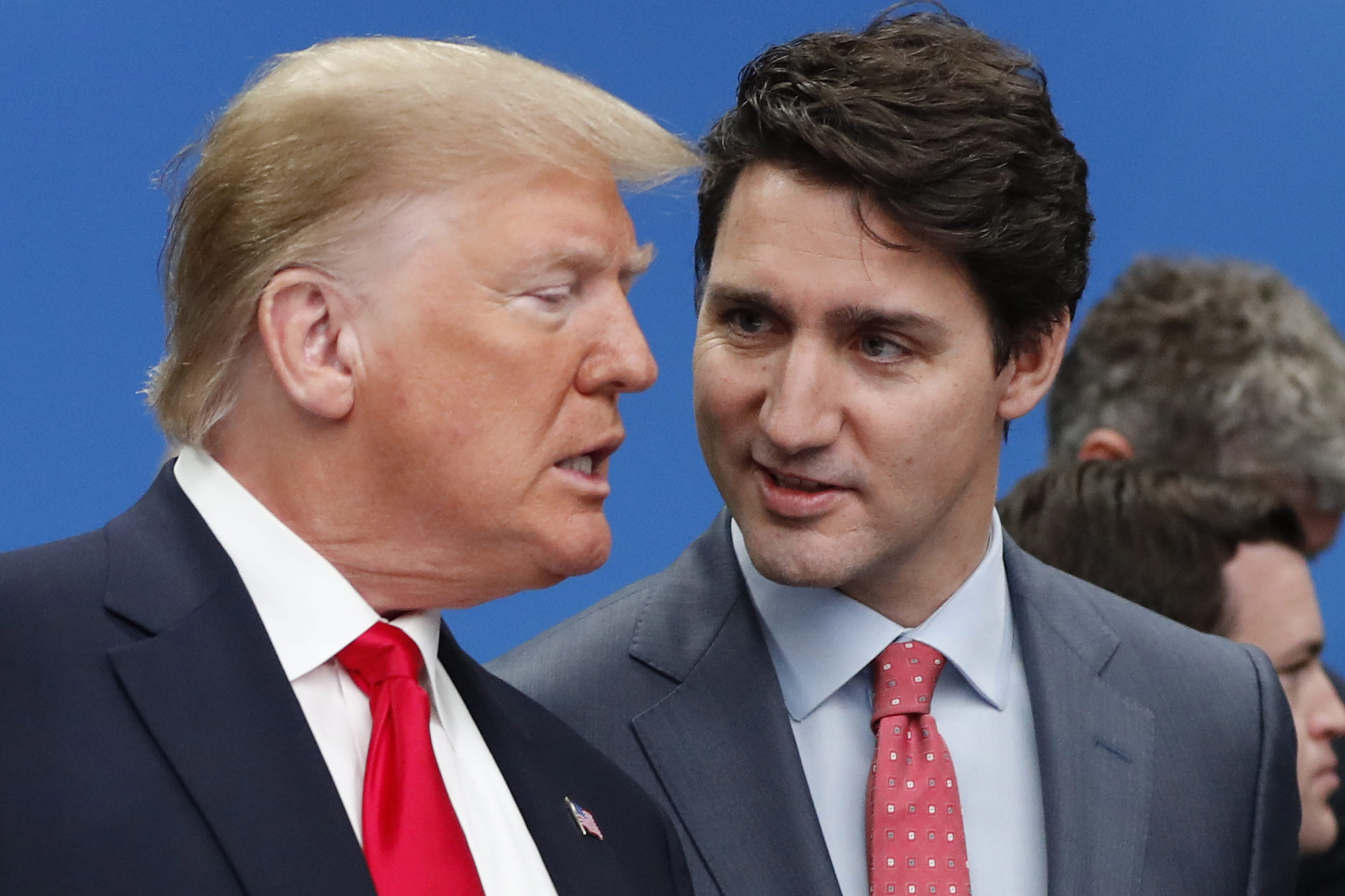 U.S. President Donald Trump, left, and Prime Minister Justin Trudeau talk prior to a NATO roundtable meeting in England on Dec. 4, 2019. The relationship between the two leaders has been tense in recent years. Photo by Frank Augstein/AP
Previous story
Next story

This is the fifth of a series of stories Emma McIntosh is writing as part of National Observer's special coverage of the U.S. election. Read the first, second, third, fourth and sixth stories here.

The year was 2016. The United States election would happen in a few weeks, and Doug Ford ⁠— who was still two years away from becoming Ontario premier ⁠— was expressing his unwavering support for Donald Trump, who would soon become president.

“I think he’s a marketing genius,” Ford said of Trump in an interview with CityNews. “They need a change down in the U.S.”

Trump has never been popular in Canada, but Ford was among the president’s most publicly ardent fans north of the border. As recently as February, a month before COVID-19 would shut down Ontario and upend nearly every aspect of our lives, Ford said he “loved listening to the president.”

Not so anymore. In April, Trump temporarily halted shipments of N95 respirators to Canada. Ford was furious ⁠— some of the masks, which are vital protective equipment for medical workers amid COVID-19, had been bound for Ontario.

“I still can’t get over it,” Ford said this month, recalling the incident in a discussion at the Ryerson Democracy Forum.

“He’s not on my Christmas card list. I’m ticked off at him.”

Trump’s loss of one of his staunchest Canadian allies is indicative of a larger problem: Tensions between the U.S. and Canada are higher than they’ve been in recent memory as Trump sheds friends, at home and abroad.

It’s not just about the medical gear. Trump has threatened Canada with tariffs and called Prime Minister Justin Trudeau “weak” and “very dishonest,” with one of his advisers even saying there is a “special place in hell” for Trudeau. At times, the frustration has gone both ways: Trudeau was caught on a hot mic last year having a laugh at Trump’s expense, a gaffe for which the prime minister did not apologize.

Businesses have complained that the tension ⁠— mainly caused by the tariff threats, but also contentious trade negotiations ⁠— has left them to contend with an uncertain environment.

Another four years of Donald Trump likely would not improve tensions between the U.S. and Canada. And although polls show the president’s path to re-election is narrowing, it is still possible. #cdnpoli #election2020 #USelection

“I’ve tracked the outlook on various American presidents going back to the early ’90s, and Trump has by far got the lowest approval rating (by Canadians) of any American president,” said Frank Graves, president of the Canadian polling firm EKOS Research.

“That has coloured Canada’s outlook on the United States.”

Another four years of Trump likely would not improve that tension, experts told Canada’s National Observer. And although polls show the president’s path to re-election is narrowing, it is still possible.

“This is an election in the middle of a pandemic, and obviously that’s changing the way many, many people vote,” said Mary Snow, a polling analyst at Quinnipiac University in Connecticut, which runs a major public opinion survey institute.

“How will it affect the ultimate vote on election day is a key question.”

It makes sense that this would matter to Canadians ⁠— our country is economically and culturally entangled with the U.S., our nearest neighbour, main trading partner and closest ally, said Christopher Sands, the director of the Canada Institute at the Wilson Center, a Washington, D.C.-based think tank. Even though most functions of the U.S.-Canada relationship are working just fine, it’s anxiety-inducing to see leaders of the two countries clashing, he added.

“In a time like this, the perception isn’t that the relationship (between the U.S. and Canada) is on fire, but that the U.S. is on fire. And because Canadians are so close, it worries them,” he said, comparing it to living next door to a couple in the midst of a messy divorce.

‘This is new territory’

Polling shows that Canadians overwhelmingly dislike Trump. If Canucks could vote in the U.S. presidential election, 72 per cent would support Democratic nominee and former vice-president Joe Biden, a Léger/338Canada poll released last month found. (Just 14 per cent would vote for Trump and another 14 per cent are undecided, according to the survey, which does not include an estimated margin of error.)

Trump's popularity is stronger in Alberta, but even there, Biden has twice as much support as Trump, the poll found. Thirty-two per cent of Albertan respondents in the survey said they would choose the president, and 68 per cent said they’d select Biden.

In an EKOS survey done in June, 79 per cent of Canadians said they felt worried that the U.S. is “on the verge of chaos,” and that this could have a negative impact on Canada. (The poll had a margin of error of 4.3 per cent, 19 times out of 20.)

“This is new territory,” Graves said, adding that Canadians’ views of Trump worsened as America’s COVID-19 problem raged out of control.

“(Trump) was already held in low esteem and that low esteem descended even further as people witnessed the most powerful, technologically advanced society on the planet end up completely screwing up.”

In the same poll, 72 per cent of Canadians surveyed said they felt the U.S. would have a better chance of recovering from COVID-19 if the election resulted in a change of power.

Ford is not the only one to express frustration about Trump’s behaviour this year. Trudeau made international headlines in June after he fell silent for 21 seconds when asked what he thought about Trump’s decision to use tear gas on people protesting racial inequity to make way for a photo op.

“We all watch in horror and consternation what’s going on in the United States,” Trudeau said, dodging the question.

“Politicians have their finger in the wind, and they see that Trump is losing popularity,” said Nelson Wiseman, a political science professor at the University of Toronto. “What do you gain by associating with a loser?”

Though the polls currently favour Biden, Trump still has a chance at victory. The president’s odds currently sit at around 44.2 per cent, while Biden’s are 52.8 per cent, according to CBC’s Presidential Poll Tracker, which aggregates polls to determine the overall picture of the race.

Campaigns are now tightly focusing their attention on possible tipping-point states like Pennsylvania, which Trump won in 2016 and Biden is hoping to flip back to the Democrats. A tipping-point state is the first one that gives a winning candidate their 270th electoral college vote, bringing them to the threshold they must surpass to win the White House. (Learn more about the U.S. electoral system here.)

“The race has been fairly stable since the beginning of September,” she said.

Debates are often a turning point in presidential campaigns, but the presidential debate gave Biden a slight bump that appeared to have evaporated by the second debate last week, Snow added.

In a poll taken in the days before the second debate, which happened Oct. 22, Biden was in a far stronger position in Pennsylvania than previous Democratic nominee Hillary Clinton was in 2016, Snow said. Trump’s numbers are “underwater,” especially when likely voters were surveyed on his response to COVID-19, but you never know what will happen on election day.

“What happened in Pennsylvania in 2016, exit polls showed that late deciders broke for Donald Trump and that helped him win,” Snow said. “It was a tight, very tight race in the end.”

Quinnipiac hasn’t yet released any polls taken after the second debate, so Snow said it isn’t yet clear how the events of that night may have influenced or not influenced the race. Notably, Biden said at the debate he would transition the U.S. away from fossil fuels, a statement the president quickly seized on ⁠— natural gas fracking is a big industry in Pennsylvania.

It’s unclear whether the statement actually hurt Biden. Surveys by other pollsters have indicated the debate didn’t substantially change either candidate’s odds.

Pollsters are accounting for mail-in voting, which record numbers of Americans have chosen to use this fall amid COVID-19, said Snow. Depending on what happens, those votes may not be tallied on election night, she said.

‘The next four years are going to suck’

The prospect of a Trump re-election might be worrying for Canadians who have seen Trump’s relationship with our country become far more tumultuous than we’re used to, Sands said. But there are also reasons to feel reassured, he added.

Though we feel like the relationship is visibly suffering, most functions of it are still running just fine. Example: With the N95 incident that angered Ford, the masks eventually made it across the border.

“The safeguards that were there to prevent stupidity, they kicked in,” Sands said.

A Biden presidency wouldn’t automatically solve the problems that have arisen on both sides of the border since 2016.

“The bad news is, the next four years are going to suck,” Sands said. “It’ll get better, but it’s going to be a bumpy ride.”

It’s unclear whether Democrats will be able to take control of both houses of Congress. If they don’t, a Biden administration would have a difficult time passing legislation. The confirmation of Supreme Court Justice Amy Coney Barrett has the potential to shift the judiciary to the right for decades to come. And even if he loses, Trump and the social divisions he brought to the surface in the U.S. aren’t going away, Sands said.

“I think it could be just as frustrating for Canadians, because Biden could say the right things but not be able to do them,” Sands said. “(If he wins, Biden) is going to have a hard time keeping the country together because Trump is going to be stoking everything … He’s going to be on the radio, Twitter, TV, every day.”

Canadians should also remember that as much as the 2016 election revealed fractures in America’s social fabric, it also surfaced similar, albeit less prominent, problems here, Canadian pollster Frank Graves said. Our politics have also become more polarized, and a change of hands at the White House won’t solve that.

“We tend to think we’re somehow immune to this,” Graves said.

I wish Canadian media would

I wish Canadian media would pay more attention to the elections for the House and especially the US Senate. If the GOP retains control of the Senate then if Biden wins he'll face the same predicament as Obama did: Unable to get almost any legislation through.