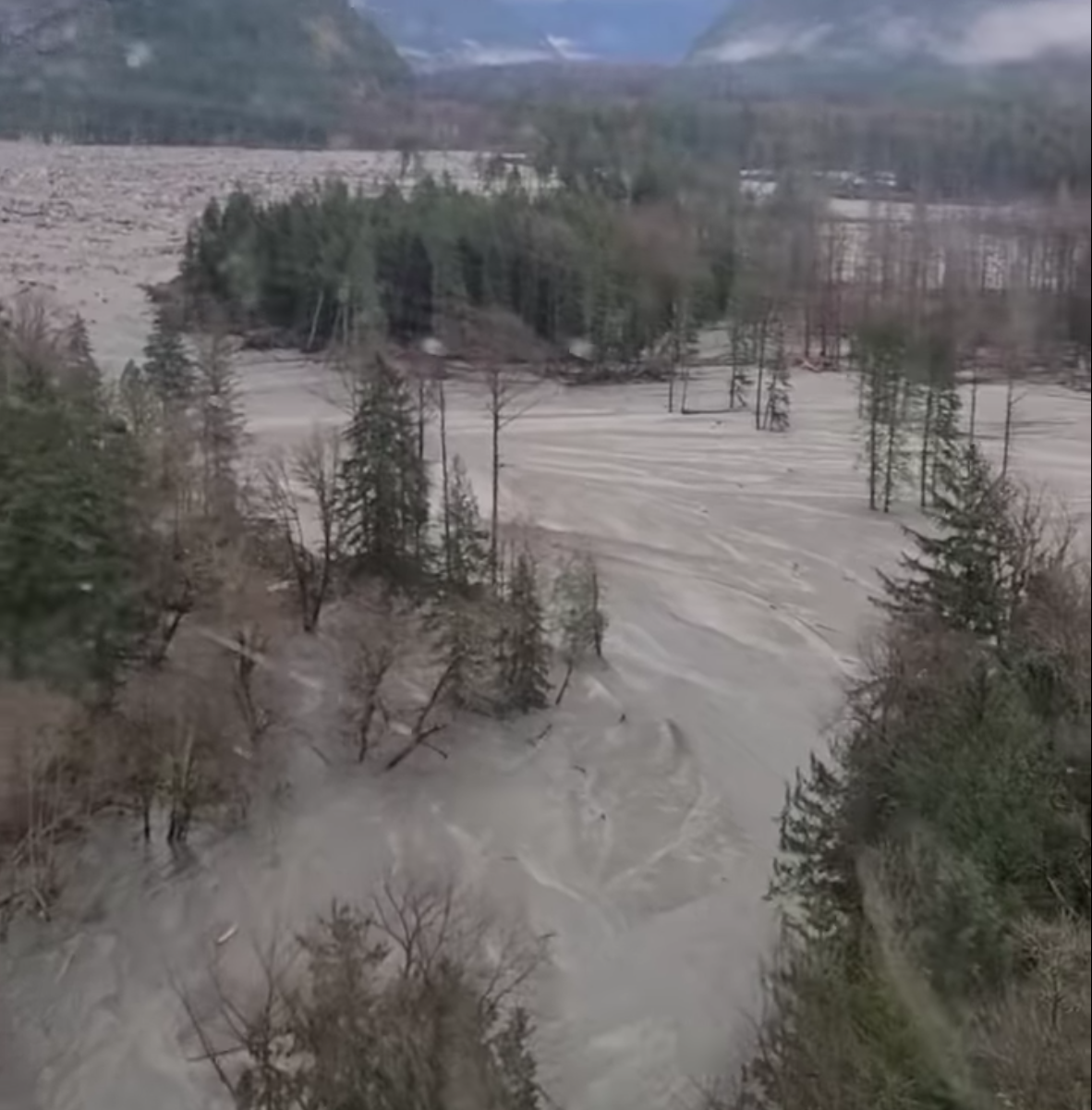 Bastian Fleury, a pilot with 49 North Helicopters, surveyed the damage from a massive landslide that wiped out wildlife habitat in the Bute Inlet watershed on the B.C. coast. Screenshot courtesy of Bastian Fleury
Previous story
Next story

An enormous landslide has scoured the watershed of a remote B.C. inlet and triggered a wave of debris that has wiped out critical salmon and grizzly habitat, and is causing hazards for marine traffic in the region.

Helicopter pilot Bastian Fleury surveyed the devastation along the 12-kilometre slide down the Southgate River that has also pushed trees, rocks and mud into Bute Inlet on B.C.’s central coast.

“It has destroyed a lot of the forest, and there is lots and lots of flooding everywhere in the valley and the inlet,” said Fleury.

The pilot did his flyover late last week after hearing reports of a cascade of wood debris floating down the inlet.

Based in Campbell River, approximately 60 kilometres southeast of the inlet, Fleury knows the area well from flying people in the resource sector and wilderness tourism into the region.

“It has completely changed the course of the Southgate River,” he said.

It appears a block of a glacier fell into a lake in the upper reaches of the watershed, causing a cascade to descend down the valley, Fleury said.

Poor weather prevented him from getting all the way up to the glacier, he said.

An enormous landslide has scoured the watershed of a remote B.C. inlet and triggered a wave of debris that has wiped out critical salmon and grizzly habitat, and is causing hazards for marine traffic in the region.

It’s likely the landslide occurred following heavy rains at the end of November, he added.

Fleury is worried the massive landslide has destroyed important habitat many animals rely on.

“It’s got to be very bad for all the wildlife in the area,” he said.

“We were impressed by the force of mother nature, but there’s not much we can do about it,” he said.

Strathcona Regional District director Jim Abram said the environmental impacts are likely to be considerable and debris is already posing hazards for marine traffic off the northeast coast of Vancouver Island.

“The scouring of that valley seen in the footage is incredible,” Abram said.

“Imagine that amount of material out of the canyon has flowed down to Bute Inlet and the debris is continuing out to the ocean.”

Commercial marine operators are already reporting trees in the waters around the Discovery Islands at least 100 kilometres from the head of the inlet, said Abram.

“We’re not just talking about rocks and silt, the slide has taken down hillsides of whole trees … that can have 20-foot-diameter root systems floating out there in the water.”

Beyond posing a hazard for boaters, trees propelled by waves and wind could cause damage to commercial and private docks and marinas along the coast, he added.

“We have a situation right now where our wild salmon are in danger. We can't afford for (spawning habitat) to get completely flushed out.”

Bute Inlet falls within the traditional territory of the Homalco Nation, which recently purchased facilities for an eco-tourist resort for its bear tours in the area, Abram added.

The region is also a haven for kayaking companies, hunters and mountain expeditions, he said.

“Wilderness tourism is a big part of our economy, and it’s just taken a big hit from Mother Nature,” Abram said.

is this in the news anywhere

is this in the news anywhere else or has covid vaccine wiped out space for everything ????

There was a brief story on

There was a brief story on CBC's National last night. This is a sad loss. Can we attribute the breakout from the glacier to Climate Change?