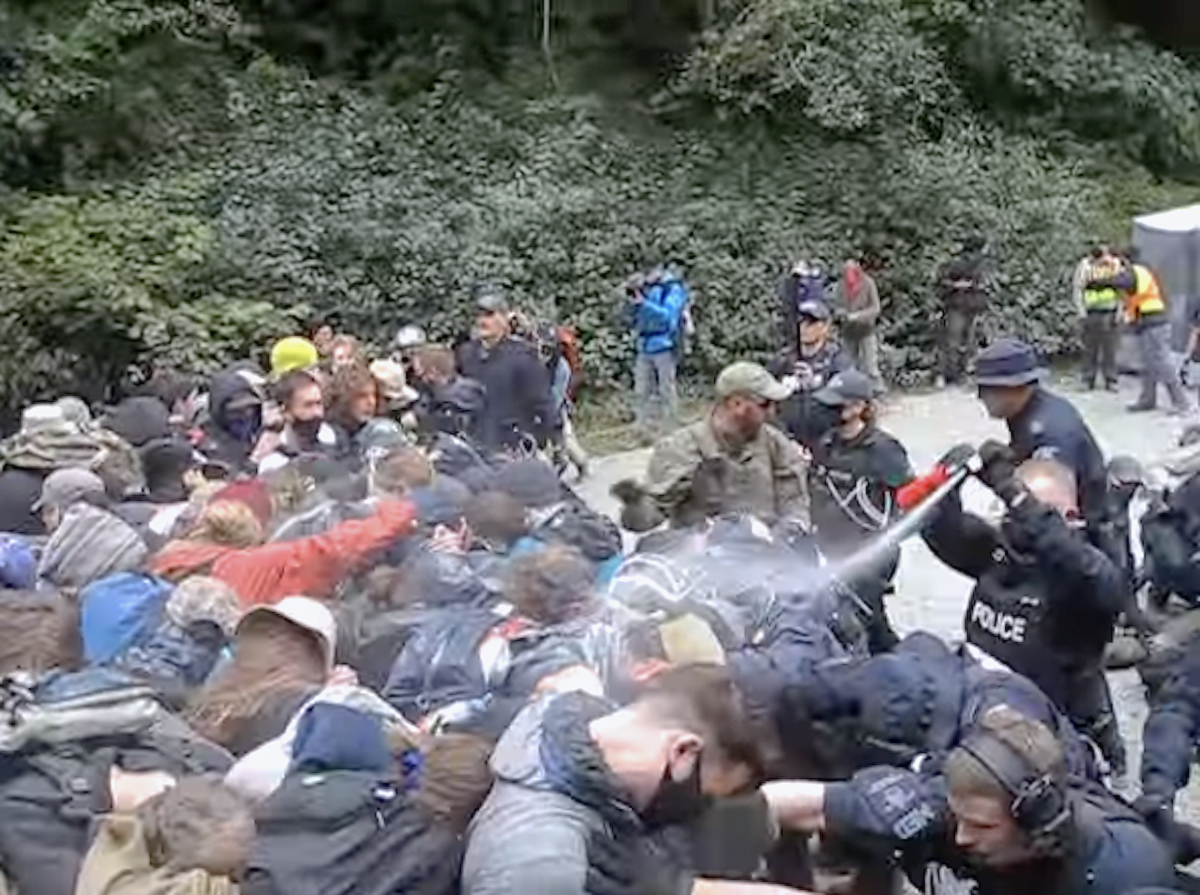 The federal watchdog that holds RCMP to account has received a total of 91 public complaints associated with police enforcement measures at the Fairy Creek old-growth logging blockades in British Columbia.

Of the total complaints received as of Wednesday, 21 fall within the mandate of the independent investigation agency, the Civilian Review and Complaints Commission (CRCC) confirmed in an email on Thursday.

The complaints cover a range of allegations including excessive use of force, refusal of medical attention, improper arrest, lack of police identification and wearing the “thin blue line” emblem, the mishandling of personal belongings, improper enforcement of exclusion zones and inappropriate handling of protesters, legal observers and the media, the CRCC said.

News of the complaints comes days after multiple internet videos surfaced showing RCMP using pepper spray against Fairy Creek old-growth protesters during a confrontation over the weekend in the Port Renfrew region.

And as a result, B.C.’s NDP government is taking fire from civil rights advocates while federal counterparts are calling for a public inquiry into police actions.

RCMP tactics and the use of force are increasingly aggressive, according to activists involved in the year-long civil disobedience movement in the Port Renfrew region, said lawyer Phil Dwyer, who represents three individuals named in the court injunction filed by Teal-Jones logging company.

The police are not using reasonable force and are reaching beyond the scope of what is required to fulfil their duties to enforce the injunction, he said, adding doing so increases the risks for everyone involved.

“Considering what I’ve seen in video and from conversations with people on the ground, it’s not surprising that this many complaints would have arisen,” Dwyer said.

“And given the fullness of time, I expect there will only be more filed.”

Today at #FairyCreek, a member of the ERT who clearly needs to be treated for PTSD instead of given a can of bear spray and told to use it on non-violent members of the public, sprayed me in the face for trying to document a violently executed arrest. #bcpoli#climateaction pic.twitter.com/AnZlBviB4v

Several online videos detail the confrontation between officers and protesters on a logging road on Saturday.

“Considering what I’ve seen in video and from conversations with people on the ground, it’s not surprising that this many complaints would have arisen,” said lawyer Phil Dwyer on 21 investigations launched into RCMP actions at #FairyCreek blockades.

In one longer video, officers can be seen shooting multiple canisters of pepper spray at close range onto a huddle of protesters who had refused to disperse and had locked arms to make their arrests more difficult.

The premier and the public safety minister need to rein in the RCMP who are using unreasonable force against protesters, many of whom are Indigenous on unceded territory with inherent rights to protect the land, said Veronica Martisius, staff counsel with the British Columbia Civil Liberties Association (BCCLA).

“The silence from (Premier) John Horgan and (Minister) Mike Farnworth is deafening,” Martisius said, noting the province has contracted the federal force to police municipalities in B.C.

“When RCMP are acting unlawfully, the province should be stepping in,” Martisius said, adding officers still have a responsibility to maintain public safety while enforcing injunctions.

“Police don’t have carte blanche to do whatever they want. Their power is limited when it comes to respecting civil liberties and human rights, otherwise we’d be living in a police state.”

The Rainforest Flying Squad, the coalition organizing protesters, alleges police are using excessive and increasing force when making arrests, as well as operating heavy equipment and chainsaws dangerously close to protesters to extract them from the obstacles designed to frustrate arrests.

One 35-year-old protester was flown by helicopter to hospital in Victoria on Saturday with neck injuries after a forceful arrest, while others have suffered a sprained ankle, a broken rib, or cuts and bruises during arrests, said RFS in a statement.

The protests and protection of old-growth is cropping up as a hot-button issue in the federal election, with the Liberals pledging to do more to protect ancient forests, and members of the federal NDP calling for an investigation into police actions at Fairy Creek.

The violent actions of RCMP at Fairy Creek are unacceptable and only escalate the situation, wrote MacGregor, who is running for re-election in the Cowichan-Malahat-Langford riding, on social media.

“We have written to Minister Blair calling for full federal review of the situation and police actions, and we are committed to more robust and independent civilian oversight of the RCMP,” he tweeted.

The violent actions of RCMP at #FairyCreek are unacceptable and only escalate the situation.

We have written to Minister Blair calling for full federal review of the situation and police actions, and we are committed to more robust and independent civilian oversight of the RCMP. pic.twitter.com/alLLrLy1PY

On Monday, hundreds of people gathered outside RCMP detachments in Victoria and other municipalities to call for the RCMP to stand down at Fairy Creek.

RCMP spokesperson Sgt. Chris Manseau said protesters failed to follow officers’ directions during Saturday’s confrontation, which he said left one officer with a concussion after he was knocked over in the scuffle.

“In order to gain compliance from that large crowd of people … it took the use of pepper spray, and then the crowd followed police direction after that.”

A lot of the video snippets online do not illustrate the full context of the situation, Manseau said.

“There's lots of examples of peaceful, lawful, and safe protests that are occurring, even after the incident on the weekend,” he said.

The RCMP cannot speak to the number of complaints made to CRCC, as it is an independent body that investigates the federal police force, Manseau said, adding he advises anyone who felt they were wronged or injured to reach out to the commission.

Regardless of any potential public inquiry, RCMP will likely do an internal review of enforcement measures at Fairy Creek, Manseau said.

“With enforcement actions like this, especially one that’s so large, I’m sure there will be a review,” he said.

“And there are things to learn from it, and to have better practices in the future. We absolutely support that.”

As to the commission's complaint process, the RCMP investigate the allegation and then issue a final report to the individual who filed the complaint, CRCC said.

But if the complainant isn’t satisfied with the RCMP’s final report, they can request the CRCC independently review the investigation of the public complaint.

Police need to take immediate action to respect the limits of their powers and act within the confines of the law when arresting people, said Martisius, but RCMP in the videos are taking heavy-handed measures against non-combative protesters.

“Of course, there are folks who are engaged in civil disobedience, but that doesn't give the right to the RCMP to act violently towards those people,” she said, adding a recent court decision made it clear officers must safely arrest and remove people.

“They still have a duty to protect the public.”

This story has been updated with the exact number of complaints received by the Civilian Review and Complaints Commission as of Wednesday.

This story was updated to correct an inaccuracy around the CRCC’s complaint process.

This behaviour by the RCMP is

This behaviour by the RCMP is beyond shameful. They seem to be servants of corporate interests, mercenaries carrying out their orders with no honour, no code of values, no integrity or even self respect. Our government should be protecting the last remaining old Growth with all of the resources our country and province can muster, not using those resources to stop dedicated, unpaid, peaceful citizens from doing so of their own initiative. They are trying to protecting these thousand year old trees, the very life support system of our planet and future generations. #Disgusted. #Shame