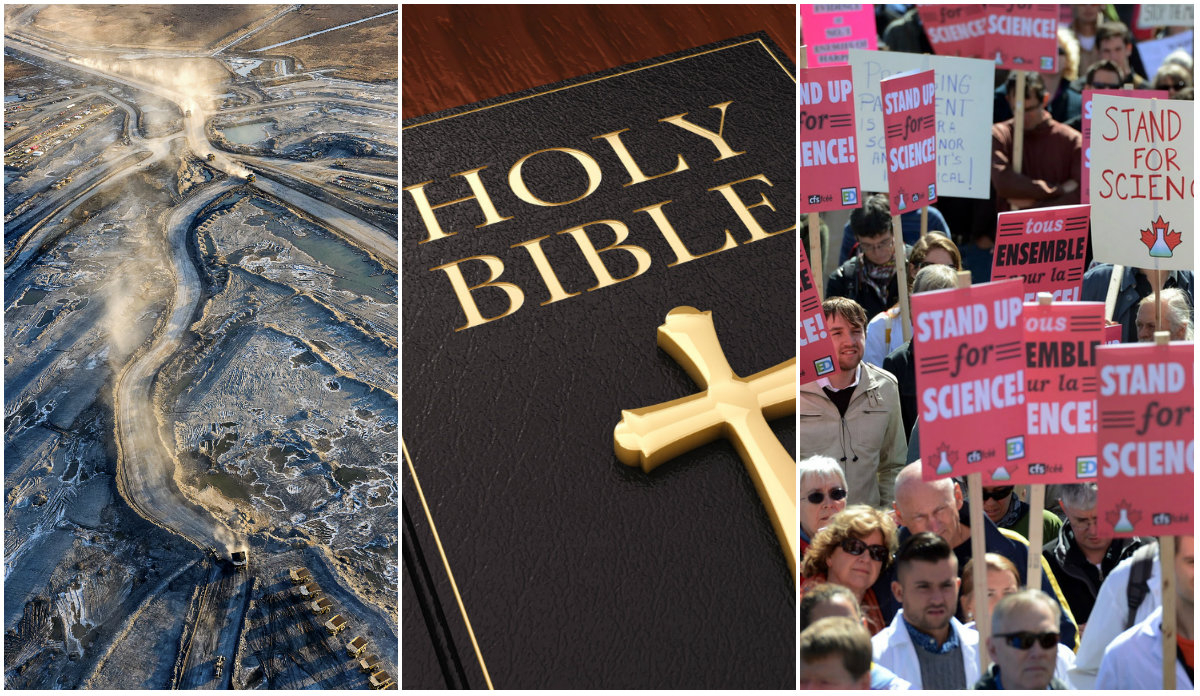 Beginning in 2008 — at the height of the global financial crisis — the federal government spent over $20 million on Christian religious groups and schools, including $495,600 for the Wycliffe Bible Translators in Langley, B.C. and $3.7 million transferred from federal funds to “Youth for Christ” in Winnipeg. It also set up a $20 million "Office for Religious Freedom" and has been spending public funds to promote "religious freedom" in countries like Nigeria.

Feds poured $2 million into a fake lake in preparation for the 2010 G20 summit in Toronto and $15 million into the Canada School for Energy and Environment, which is accused of being a "one man advocacy centre" for former PMO staffer Bruce Carson, who is now on trial for alleged influence peddling and illegal lobbying.

It rewarded senior government bureaucrats across several ministries with large bonuses for under spending their budgets, and even considered buying 20,000 custom-printed stress balls for staffers at the Department of National Defence.

Yet as the federal government lavished funds in these areas, it subjected many of its departments to a “strategic review” that demanded they find ways to slash millions of dollars from the federal budget.

And more than 10 federal departments closed or consolidated their libraries as part of the government’s Deficit Action Reduction Plan (DRAP), which downsized the budgets of most federal agencies between five and 10 per cent. Librarians were fired, book shelves were gutted, and thousands of volumes of literature were left in the dump.

The drastic cuts to science came at a time when the government loosened its purse strings for oil and gas and religious programs, providing a glimpse into the spending priorities of the Conservative government under Stephen Harper.

“The Harper ministries were becoming more selective in what they wanted scientists to tell them,” found the CBC’s Fifth Estate in a 2014 investigation called Silence of the Labs. “Science geared to economic growth would do well; science raising inconvenient caution signals about human health, climate change, habitat destruction — not so well.”

Not surprisingly, Natural Resources Canada (NRCan), the Department of Fisheries and Oceans (DFO), and Environment Canada were arguably three of the hardest hit departments by closures over the last three years, having lost six, seven, and nine libraries respectively:

“When you look at what they've done, it's hard not to conclude that they are targeting materials that relate to the environment and climate," said John Dupuis, a librarian at York University and author of Confessions of a Science Librarian, which has chronicled the Harper government's cuts to federal libraries.

Dupuis said it was impossible to determine whether the library cuts to DFO and Environment Canada were politically motivated. It could have been, he suggested, because these departments had more libraries than other departments. The image of books in dumpsters was a "double-edged sword," he said, because while it sparks public outrage, consolidation and digitization are normal for libraries. The main difference, Dupuis said, was the "careless" manner in which the federal government seemed to handle its science library closures.

Despite what some have called “obscene” spending in other departments, the government explained these closures as part of a cost-cutting measure, and the consolidations and digitization that followed as a way to streamline and modernize a seldom-used library system. Despite this explanation, it estimated 2014 to 2015 savings on the DFO shut downs at a paltry $443,000 — pennies in comparison with the newly-negotiated $22 million-government ad blitz that included $18 million in media buys to promote oil sands and natural resources in the U.S., Europe and Asia.

Unfortunately, Dupuis said when organizations look to save money, libraries are “often the easiest place" to find it, even if the savings generated are minimal.

Craig Orr, a wildlife ecologist specializing in aquaculture impacts who has worked with DFO on conservation projects, said the lack of data and information is harming scientists studying British Columbia's waterways.

“The closure of libraries was a little bit for saving money, but more about government abandoning evidence-based decision making," he said.“We've seen really alarming trends in terms of ground water availability and stream temperature. But without the data, nobody can prove the government wrong.

Orr said he was disturbed by the halt on data-gathering for coho salmon in Black Creek on Vancouver Island, where scientists have continuously monitored fish for over two decades.

"A lot of this information is linked to climate change," he said. "They've abandoned monitoring for smaller river systems, and we'd had continuous series of data for 25 years in some of these indicator streams. When you start axing long-term monitoring, it's a sign the government really doesn't want this data."

Keeping a tight lid on closures

According to scientists, this evasion closely resembles government silence during the shut downs themselves, which began in 2010 and were ongoing as of mid-August when books from the Agriculture and Agri-Food Lethbridge Research Centre in Alberta were found in a dumpster.

National Observer spoke with scientists, researchers and librarians from Environment Canada and DFO, none of whom were consulted before the closures and many of whom didn’t know about them until hours before the book shelves were gutted.

Marine zoologist Eric Marshall, for example, didn’t know the library bearing his name was closing until he read about it in a Winnipeg newspaper article in December 2013.

“I was sort of devastated,” he said from his current home in Cowichan Bay, B.C. “This was my baby that I built up over the 25 years that I worked for the government.”

The Eric Marshall Aquatic Research Library at the University of Manitoba’s Freshwater Institute was named when Marshall retired from DFO in 1992, and was widely recognized as one of the best freshwater libraries in North America. The department never reached out to him before or after the closure.

“My son visited the library around Christmas time after everything had been gone over by whoever wanted it,” he explained. “There must have been quite a few thousand volumes sitting there, and I assume that they just went for recycling. I don’t know.”

Michael Rennie, a former DFO scientist who is now continuing his for Experimental Lakes Area research at the International Institute for Sustainable Development, remembers the notice came just before a chaotic giveaway of materials in the library.

"One day, we were just told, 'we're having a fire sale, just come get whatever you want that's being listed as duplicate material.' I was never consulted," Rennie said. "If there were consultations, it would have all happened many tiers above the people who were actually using the library."

During the course of the email exchanges, Environment Canada did not admit that it closed any libraries at all, and maintained that collections were “relocated.”

Tremors before the earthquake

In 2005, another researcher — a veteran with more than 30 years of public service experience — was asked to join a 'library committee' by librarians in his department. The purpose of the committee was unclear at the time, but he soon learned that the government librarians were assembling a team of senior researchers who could advocate for them and the continued usefulness of libraries.

“Clearly, the librarians felt threatened,” said the scientist, who asked to remain anonymous to protect his current job. “They were taking some defensive measures… I suspect they felt threatened from the days of the Harper minority government.”

A few years after the committee was formed the librarians disappeared, almost as though they knew it was coming, he added, although they certainly never hinted as such.

“They (the librarians) were gone so fast,” he told National Observer. “There was never an opportunity to sit down and talk with them behind closed doors and find out their side of the story.”

Sure enough, one year later, the axe came swinging on several of his department’s libraries.

Biologist Peter Wells also felt the tremors long before the earthquake and retired from his decades-long career with Environment Canada at the beginning of Prime Minister Harper's rule in 2006. Now employed through the Marine Affairs Program at the University of Dalhousie, he spoke freely about his timely departure:

"I could see the writing on the wall in terms of how we were being reorganized, reduced in numbers and given more work to do with impossibly low resources," he explained. "But I refused to lie down and play dead — very few people who were previously federal civil servants in my field have spoken out."

Scars from cuts to federal libraries

Between 2007 and 2009, Wells wrote a chapter on the history of the famed St. Andrew's Biological Station (SABS) in New Brunswick for collaborative book called A Century of Maritime Science, scheduled for release mid-winter. A few years later, the library at SABS was shut down by DFO, and Wells said if he tried to write that chapter again today, the research simply wouldn't exist.

"I could not have written this book chapter without the archival materials and other materials in the library at that time," he explained. “We’ve lost capacity in terms of people, we’ve lost information, we’ve lost reputation both nationally and internationally."