Stephen Harper no longer the head of the Conservative Party 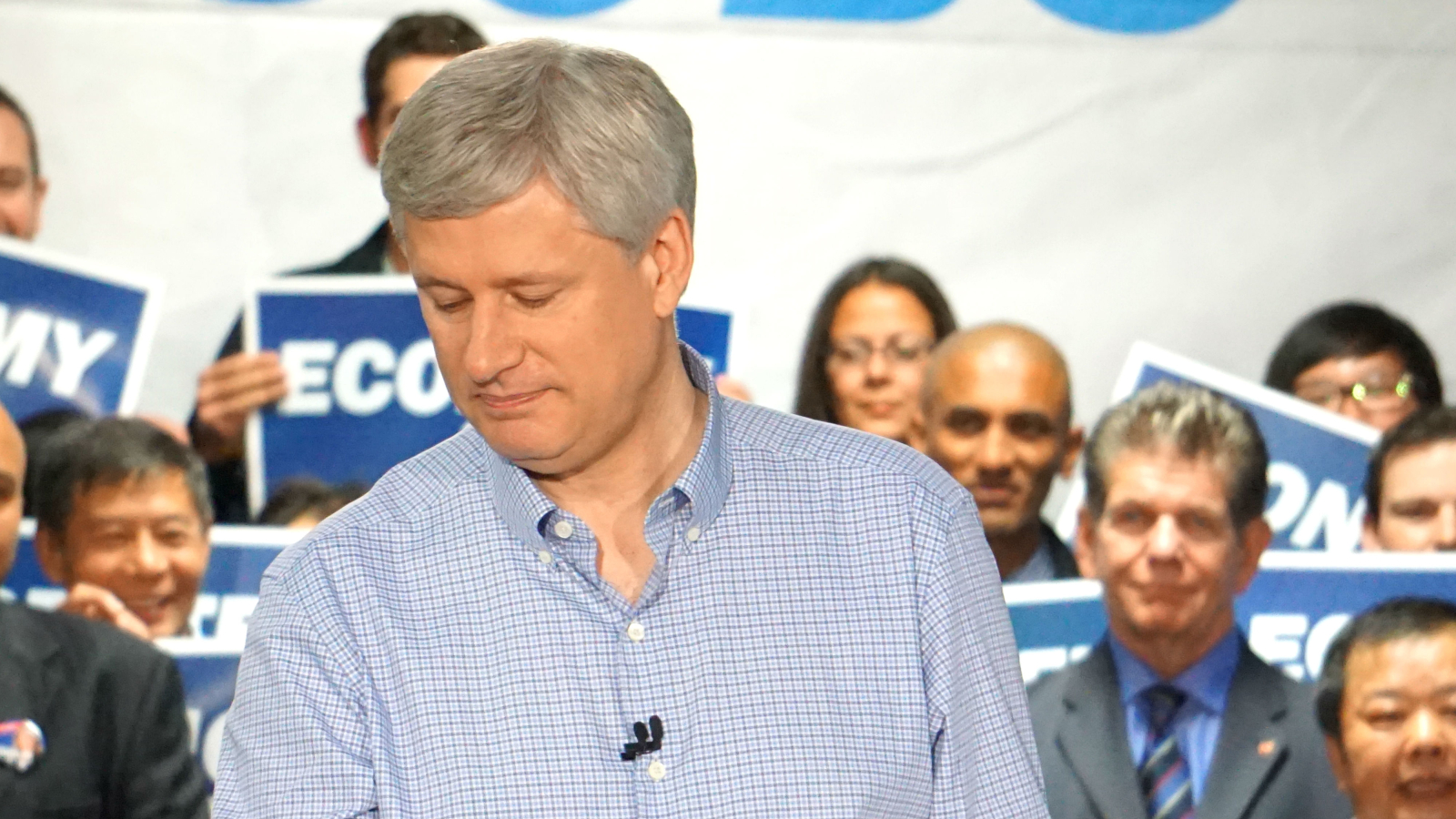 Stephen Harper, former prime minister, stepped down as the leader of the federal Conservatives on Mon. Oct. 19, 2015. Photo by Elizabeth McSheffrey.
Previous story
Next story

After suffering a decisive loss to Justin Trudeau's Liberals in the 2015 federal election, Stephen Harper resigned from his position as the leader of the federal Conservative Party.

In a breaking news release issued late Monday night, CPC President John Walsh announced that the former prime minister of nearly a decade would be stepping down from the top Tory desk:

"I have spoken to Prime Minister Stephen Harper and he has instructed me to reach out to the newly elected parliamentary caucus to appoint an Interim Leader and to the National Council to implement the leadership selection process pursuant to the Conservative Party of Canada constitution," he said.

In a concession speech to supporters in Calgary earlier on Monday night however, CTV reported that Harper did not mention his resignation as leader, but accepted the defeat by Liberal Leader Justin Trudeau “without hesitation.”

“It has been an unbelievable honour to serve as your prime minister,” Harper told an audience shortly before 10 p.m. local time. “While tonight’s result is certainly not the one we had hoped for,” he added, “the people are never wrong.”

In a September interview with CBC's Peter Mansbridge, the former prime minister indicated he would resign if his party lost even by a few seats.

While news of his departure may still surprise some, the Conservative's loss in the federal election certainly did not. Political commentator and Chronicle Herald columnist Dan Leger said the Tories had it coming since day one.

A loss long in the making

"It took nine years, eight months, and 13 days for them to alienate enough people in the country with their brand of politics that finally, it’s come back and bitten them in the ass,” Leger told National Observer from Halifax, where the Liberals soared early in the evening.

“If you have a cynical character like Stephen Harper always manipulating and trying to play every game to his own partisan advantage, after a while people figure that out."

The Conservatives came into power in 2006 on the back of the Liberal sponsorship scandal, he added, and proceeded to do no better themselves.

Between the omnibus bills, the Duffy senate expense scandal, the muzzling of scientists and the war on knowledge, the Conservatives undermined their own arguments that they were "ethical and transparent."

"This constant manipulation and Machiavellian games that the Harper crowd was always indulging in — I just think that came back to haunt them and turned out to be an immense turnoff," Leger explained. "(Canadians) are not stupid.”

Despite these cardinal sins, however, he hypothesized that the Tories' campaign mistakes may have ultimately done them in.

After all, the Tories surged in the polls during mid-September and early October as a result of their niqab debate politics, and all three federal parties took a turn leading the national popular vote.

It really was anybody's game — until the recent rise of red tide, that is.

The Conservatives launched bold attack ads against Liberal leader Justin Trudeau early in the election, which lasted for a record 78 days in total. Under the patronizing slogan "He's just not ready," Harper and his team taunted him as "a joke, a pretty boy, and a flake," said Leger.

"They became overconfident and didn’t realize what a potent campaigner he would turn out to be," he told National Observer. "The extra long election campaign actually worked to Trudeau’s advantage because he really seemed to get better and better as the campaign went on."

The 43-year-old man who started the campaign is not the same man who finished it, said Leger, and Trudeau surpassed expectations with passionate performances in the candidate debates and bold, progressive policies typically associated with the leftist NDP (think economic deficits and scrapping federal fighter jets).

The Harper team misplaced its emphasis on preventing economic disaster and underestimated the courage of Canadian voters.

"The country doesn’t collapse in a stinking heat of rubble when a different party takes over in Ottawa," Leger explained. "Canadians don’t see huge risks in trying out other parties."

The Tories needed a near-perfect scenario to win: a relatively even split between progressive voters who support the Liberals and the NDP. But when Tom Mulcair's campaign went from "orange crush to orange crash" (as former Harper strategist Tom Flanagan told National Observer), Trudeau seized his opportunity in a way Harper had underestimated:

"'It’s time for a change' is just the most powerful message," the columnist explained. Leger has been covering elections for decades, and said the candidates who lead with the idea of change frequently fare the best.

“People are funny. They get an idea in their head like it’s time for change, and it doesn’t matter what you say — you can make fairy dust rain and the Blue Jays can win, but it doesn’t change that really profound, deep sense that people have sometimes.”

The Conservative Party will issue an update on Harper's resignation early Tuesday morning.