Without real action, the Paris Accord is worthless 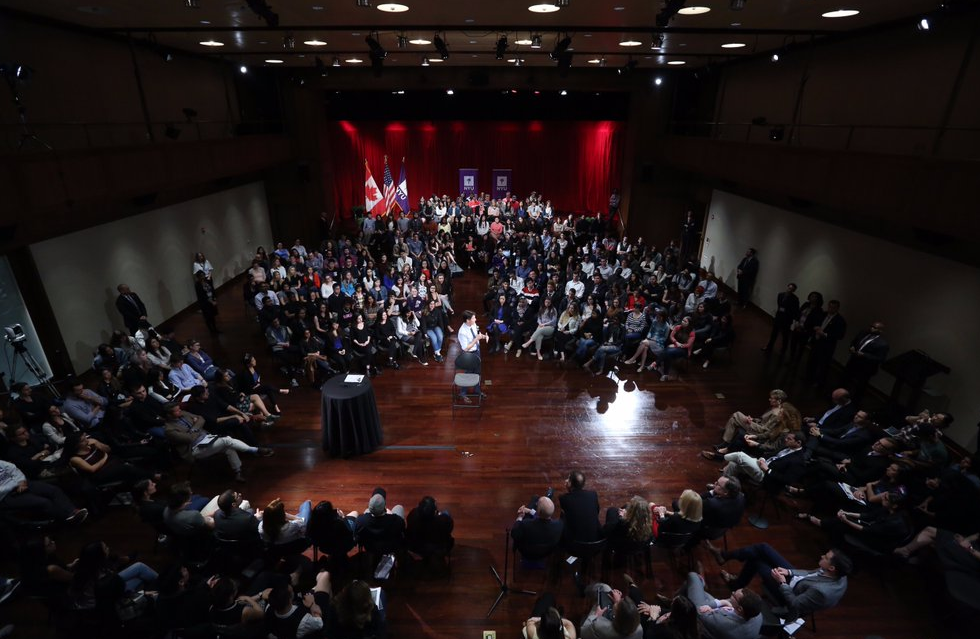 Justin Trudeau addresses a crowd in New York City Friday morning ahead of signing the Paris Accord. Photo from Twitter
Previous story
Next story

The signing of the Paris Accord on Earth Day in New York by as many as 170 countries - including Canada - will undoubtedly be declared historic. In truth, it is just a beginning.

In the lead up to the accord, Canada has certainly talked the talk: the Canadian contingent was key in setting the ceiling of 1.5 degrees Celsius for global warming that will form part of Friday’s accord.

Canada’s commitment calls for a reduction in the country’s greenhouse gas emissions by 30 per cent below 2005 levels by 2030.

But a report released Thursday from the Parliamentary Budget Office (PBO) doesn’t hold out much hope for that target.

It noted that while a number of provincial governments have put in place “moderate measures” to limit emissions, they are unlikely to achieve the Canadian target and only represent a first step.

The PBO said further work to meet the reductions is needed in reducing emissions from coal use; improving the fuel efficiency of cars and trucks; and undertaking a detailed analysis and projection of the contribution of managed forests to removing greenhouse gas emissions from the atmosphere.

At the same time, Prime Minister Justin Trudeau has been unsuccessful in reaching any kind of national unity on how reductions will work; each province is pursuing its own agenda.

Accord signing comes amidst renewed calls for pipelines

Nor does the Canadian government’s renewed interest in pipelines bode well for any agreement.

In mid-Apri, there was widespread criticism from all sides over news alleging that Trudeau had instructed key officials to prepare a strategy for approving major new pipeline projects.

“If you build a pipeline, you’re going to fill it with tar sands that’s going to increase our emissions and that’s not going to allow us to meet our climate change commitments," said Stone, in an interview with National Observer.

He said it was impossible to burn the fossil fuel reserves currently available and meet the government's objective of limiting global warming to 1.5 degrees Celsius above pre-industrial levels.

At the same time, Alberta has renewed its push for pipelines. At the recent NDP convention in Edmonton, Alberta Premier Rachel Notley declared: “The way to [help Alberta's economy] is to build pipelines to tidewater that will allow us to diversify our markets and upgrade products here in Canada.”

And in British Columbia, the Christy Clark government persists in its plan to float the provincial economy on massive LNG projects - despite opposition from much of her own electorate.

The Liberal and NDP governments would appear to be talking out of both sides of their mouths.

The planet has already changed

All this occurs in the context of an ever-hotter world. In late January, NASA and the National Oceanic and Atmospheric Administration confirmed that 2015 temperatures were the warmest since modern record keeping began in 1880.

In 2016, the trend has continued with each successive month shattering previous records for heat.

Compared to a rise of 1.5 degrees Celsius, a jump in the global temperature to two degrees would double the severity of crop failures, water shortages and heatwaves in many regions, phys.org reported Thursday.

“I cannot continue to hope that our planet is not going to change radically. It already is changed,” marine scientist Ruth Gates recently told New Yorker writer, Elizabeth Kolbert.

Gates studies coral reefs and has observed first-hand massive reef bleaching events caused from the warming ocean waters, which were nicknamed the “blob.”

Scientist James Hansen issued a stark warning in late March over ice melt from Greenland. He said the melt “raises questions about how soon we’ll pass the point of no return in which we lock in consequences that cannot be reversed on any time scale that people care about.”

As dire as all this is, we cannot give up hope.

The transformation of the economy from fossil fuels to renewable technology is clearly underway.

In late February, Clean Energy Canada released a report showing that 2015 was the first time more money was invested in renewable power globally (US$367 billion) than in new power from fossil fuels (US$253 billion).

Much needed rain in California has helped ease that state’s drought, although the most recent update from the government drought portal doesn’t declare it over yet.

ExxonMobil is the focus of a multi-state investigation after separate investigations by InsideClimate News and the LA Times/Columbia School of Journalism revealed that the company had known of the threat of climate change internally for several decades.

But there is still much work to be done.

In Berlin, Ottmar Edenhofer, director of the Mercator Research Institute on Global Commons and Climate Change, issued the following statement: "In order to limit climate risks, the Paris agreement has to be implemented quickly—as clear as the goals are, the way to get there is uncertain.

“Worldwide, a huge number of coal-fired power plants are being built. Here, only the economic principle can be of help: those who harm the climate, to the detriment of all, have to pay for it. This would trigger investments in clean innovations.”

It is vital that Canada sort itself out and takes real action on climate change. Trudeau needs to clarify his intentions around pipelines and show firm leadership in guiding the country as a whole toward an unified climate change policy.

Peruvian activist, Diana Rios, may have put it best at Thursday’s Forests and Climate panel in New York City. She was talking about indigenous peoples and their stewardship of the trees, but her call to action could easily apply to the Paris Accord.