By Elizabeth McSheffrey & Jenny Uechi | Analysis, Energy | May 19th 2016
#203 of 1417 articles from the Special Report: Race Against Climate Change 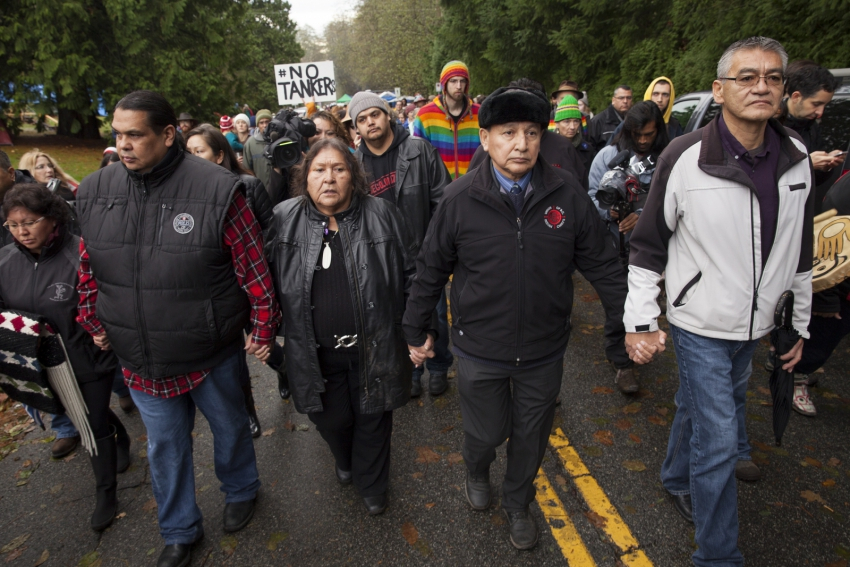 Canada’s National Energy Board (NEB) has sided with Texas-based Kinder Morgan over the concerns of British Columbians and First Nations. The Board defied broad opposition from mayors and chiefs opposed to a surge of tanker traffic and oil spills when it approved an oil sands pipeline from Alberta into Metro Vancouver, with 157 conditions.

The NEB, which has done an extensive but controversial review of the project, recommended approval of the project with a set of 157 environmental, techincal, and financial conditions.

"We have received the NEB recommendation and are pleased our project has been found to be in the national public interest," the company announced on Twitter. It's a major victory for North America's largest energy infrastructure company, built by former Enron executive Rich Kinder.

The pipeline expansion has incited fierce opposition, largely because it would bring 400 oil tankers per year through Vancouver's beautiful harbour, near Stanley Park, into a marine area inhabited by endangered Orca whales. Critics say the review process was flawed and undemocratic due to, among other reasons, former prime minister Stephen Harper changing the NEB Act and appointing a Kinder Morgan consultant to the board last year.

Twenty-one municipalities, including Vancouver, Burnaby, Port Moody, and Victoria vehemently oppose the expansion project, along with 17 First Nations, from the Squamish in B.C. to the Lummi Nation in northern Washington. In 2014, over 120 civilians were arrested on Burnaby Mountain protesting the project.

In November 2014, conflict between Kinder Morgan and citizens flared over the company's plan to drill through Burnaby Mountain, the site of Simon Fraser University. As a wide range of people gathered to block excavation, they crossed police lines and were arrested. B.C. Grand Chief Stewart Philip and Lynne Quarmby, then-chair of SFU's molecular biology and biochemistry department knowingly crossed the line and were arrested. Tamo Campos, grandson of environmentalist David Suzuki, was arrested after allegedly being dragged across the police line by officers.

"The NEB process is now a sham,” said Lynne Quarmby, before her arrest. “We have a process that does not allow consideration of climate change... at a time that climate change is the biggest problem facing humanity. It's unethical."

"At the end of the day when you're dealing with unjust law and abusive power, the last resource we have is civil disobedience. It's done in full respect of the rule of law. But it's also done with serious responsibility with being a citizen in this country," said Quarmby.

If approved, the Kinder Morgan project will triple the existing 60-year-old Trans Mountain pipeline's capacity to 890,000 barrels per day.

The $6.8-billion project is expected to bring a five-fold increase in tanker traffic, bringing traffic through Vancouver's Burrard Inlet to over 400 oil tankers a year. Kinder Morgan claims the project will create 37,000 direct, indirect and induced jobs per year on its operations, but CRED, a business organization, said in a report that the pipeline would only result in 50 permanent jobs in the province.

"The Kinder Morgan expansion pipeline is not in the interest of long-term prosperity for BC. There is overwhelming evidence that this project would bring economic risk to BC's core industries: tourism, coastal industries, real estate," said CRED spokesperson and program director Andrew Grant.

The pipeline will open access for crude oil and petroleum producers from Alberta to reach refineries and export terminals in Vancouver and Washington, and, according to the proponent, is expected to generate $46.7 billion in additional taxes and royalties to federal and provincial governments over 20 years of operations.

"The Trans Mountain Expansion Project will help make sure Canada gets full value for its oil," the company writes on its website. "Pipelines are proven to be the safest and most efficient method to move petroleum products over great distances on land."

In order to reduce the risk of catastrophic spill or worker hazard however, Trans Mountain will review and enhance its Emergency Management Program (EMP) and associated emergency response plans (ERP) upon approval. It will also strive to restore all disrupted farm land and wetland habitats in an effort to minimize its footprint.

A number of residents near the Westridge terminal in Burnaby, where the pipeline ends, had to evacuate their homes in 2007 after a contractor's backhoe struck the line causing it to burst and spew oil. Mary Hatch, a retired schoolteacher whose home was 100 metres from the 2007 Kinder Morgan pipeline spill said bitumen coated her home and car. The neighbourhood became like a "war zone" on the day of the rupture, she added.

“When I first had my house covered with oil, I was in total shock. I didn't even know there was a pipeline there," she said in an interview with Vancouver Observer in 2013. She and a few other homeowners affected by the spill have opposed the pipeline expansion, citing concerns such as health and real estate values. Others signed non disclosure agreements and have never spoken about the incident publicly.

“I didn't like the way people were treated by Kinder Morgan....the PR people were of course very nice. But there was an underlying way that the company tried to minimize the oil spill's impact on people.”

Burnaby mayor Derek Corrigan and Vancouver mayor Gregor Robertson vehemently oppose the project, with Corrigan saying he will lie down in front of a bulldozer to stop the pipeline. "I’m prepared to fight this out to the bitter end. I’m incensed with how we’ve been treated,” Corrigan told National Observer in March 2014.

Corrigan has urged the federal government to suspend the NEB hearings, saying the "hearings do not allow for meaningful public participation." The City of Vancouver has cited the increased possibility of an oil spill that an increase in tankers will bring to the area as a threat to billions of dollars in Vancouver's value as a city.

In its submission of final evidence to the NEB, the City of Vancouver wrote that “The Burrard Inlet and Fraser River estuary are some of the world’s most important ecosystems and are among the defining factors identified in a study that valued Vancouver’s brand at $31 billion due to its reputation as a “green, clean and sustainable” city. Consequently, Vancouver’s brand is more likely to be negatively affected by an oil spill than comparable cities and could impair the brand value by up to $3 billion which would require significant investment to help rebuild."

The NEB's hearings on Kinder Morgan's pipeline expansion have been criticized by participants who alleged the energy oversight board was limiting public participation, dialogue about climate change, and overall transparency. In 2014, nearly 1,000 people applied to take part in the hearings, but 452 people or groups who applied for intervenor status were rejected for not living directly along the pipeline route, while 468 were denied participation altogether. The board's objectivity was questioned when the Harper government appointed a former Kinder Morgan consultant to the NEB in 2015. Economist Robyn Allan dropped out of the hearings, citing problems with the process.

In the weeks leading up to the NEB's announcement on Thursday, First Nations and environmental groups did everything they could to push for a ruling against the project. At a Kinder Morgan meeting in Texas on May 10, Tsleil-Waututh spokesperson Rueben George beseeched shareholders not to support the Trans Mountain expansion, hand-in-hand with representatives from West Coast Environmental Law and the global consumer watchdog, SumofUs.

“We are opposed to Kinder Morgan’s Trans Mountain expansion project, which terminates in the heart of our territory, because of the unacceptable risk that a spill poses to our culture, identity and spirituality," said George. "We will do what it takes to stop it."

Four days later, nearly 1,000 protesters swarmed the company's terminal in Burnaby, B.C. to protest the new pipeline and push Canada's transition away from fossil fuels. Barely four days after that, activists in kayaks went back for more, and paddled out into cold B.C. waters to block a tanker from docking at the terminal.

According to a recent report from Stand, Kinder Morgan is responsible for at least 1,800 oil and chemical spill violations since its incorporation in 1997, a record that includes international fines exceeding $2 million and hundreds of residents forced from their homes for a spill in the coastal Burrard Inlet in B.C.

The existing Trans Mountain pipeline alone has spilled 6 million litres of oil. Stand found Kinder Morgan's list of safety violations to be extensive: since 2003, Kinder Morgan has dumped waste into the sea, mixed an illegal solvent with gasoline and diesel, placed its pipelines too close to schools and hospitals, lied on a permit application, violated the US Clean Air Act, and submitted misleading information to the US Federal Energy Regulatory Commission around water quality issues on a pipeline.

But the company's shortfalls don't stop there — Stand further uncovered a disturbing financial track record that includes dodging taxes in Colorado, shortchanging Canadians on taxes in B.C. and Alberta, misleading its investors in Delaware, and defrauding customers in Illinois.

“We can’t trust our coast to Texas billionaires with a history of putting the bottom line ahead of people and communities," said Sven Biggs, a pipeline campaigner for Stand, when the report went public. "Let’s be clear — this pipeline will never be built."

The federal government will spend months reviewing the NEB's recommendations before issuing its own verdict on the expansion. It could either green-light the project entirely, issue approval with a series of financial, environmental, and technical conditions (as it did with Enbridge Northern Gateway), request more information from the proponent, or reject it in full, belly-up.

The Trans Mountain expansion project will likely be the first test for Prime Minister Trudeau's new government, and if approved, could set a precedent for oil sands expansion less than one year after ratifying Canada's commitment to drastically cutting its greenhouse gas emissions and keeping global warming below 1.5 degrees this century.

The Liberal leader has been cryptic about his intentions for the country's oil industry, having endorsed the Paris Climate Accord and later indicating that building new pipelines would help pay for Canada's transition to a greener economy. The government is expected to make a final decision on the project before the end of the year.

After the decision, the story will continue to unfold. More protests are expected.

Andrew Grant, program director for CRED said this today: “The Kinder Morgan expansion pipeline is not in the interest of long-term prosperity for BC. There is overwhelming evidence that this project would bring economic risk to BC's core industries: tourism, coastal industries, real estate, and overall brand. CRED has criticized the NEB review process as being unfair and we don't put much stock in the decision announced today. We hope to hear more details around a fair assessment of the environmental impacts and business case through consultations and dissemination by federal cabinet.”

For some, the very future of the coastline and a cherished way of life is at stake. As Chief Stewart Phillip told our reporter on Burnaby Mountain on a rainy day in November of 2014 before his arrest: "I am the grandfather of 14 incredible, beautiful grandchildren. This is about the future of all of our grandchildren."