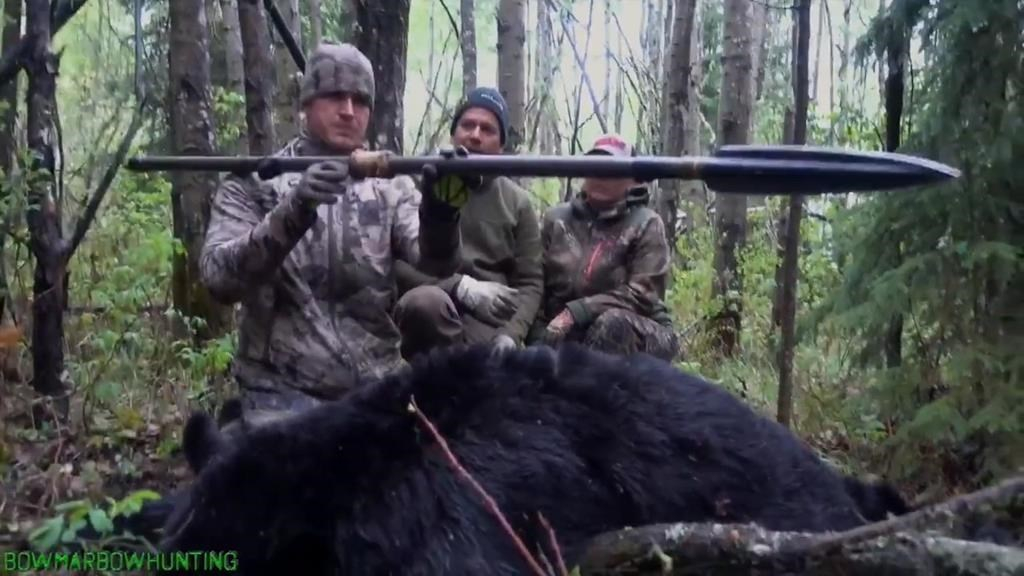 Screenshot of Josh Bowmar with spear, posing beside dead black bear in Alberta, May 2016.
Previous story
Next story

UPDATED August 18, 7:36 p.m.: Under Armour has dropped its sponsorship of Sarah Bowmar following the bear-spearing controversy. While some applaud the company's decision, others supporting the couple's actions vow to boycott the brand.

Livid animal advocates are calling for an 'online protest' against American fitness guru Josh Bowmar, who killed a black bear with a 7ft spear during a trip to Alberta.

Bowmar first baited the bear, then speared the animal, which ran away and was found the next day with its intestines hanging around low-lying branches. His wife Sarah helped filmed the hunt, according to reports.

While the video sparked international outrage, the Columbus, Ohio-based couple vehemently pushed back against critics, arguing that spearing a bear in the wild isn't any more cruel than killing farm animals for food.

Sarah Bomar reportedly replied to one of the animal advocates, saying:

"You really think I owe you anything? And hunting is our life. We will never stop."

Sarah Bowmar was sponsored by Under Armour, as part of the brand's line of clothing for hunters. The company has spent the last few days responding to protests about the bear killing, saying it doesn't condone of her husband's method of using a spear to kill bears, and that although they sponsor Sarah, they don't sponsor spearthrowing Josh. On August 18, Under Armour announced it was ending its relationship with Bowmar due to the controversy.

The original bear killing video that sparked global outrage was shot by the Bowmars themselves. The video shows a black bear approaching food used as bait. Josh Bowmar is seen spearing the bear, then turning to the camera and boasting: “I just did something that I don’t think anybody in the world has ever done and that’s spear a bear on the ground on film. And I smoked him!”

As the bear runs away, Bowmar tries to track it, only to find his spear. But he says based on the amount of blood, there was a "lot of penetration" and that the bear must have surely died.

Josh Bowmar defended the killing as humane in a statement to Global News, saying that "a spear is more of an ethical, humane weapon to hunt with than a bow.” Bowmar and his wife denied accusations they killed the bear solely to get photographs, and said they used every part of the bear and did not let it go to waste.

Defenders of Josh and Sarah Bowmar repeatedly stated that the use of a spear to kill the bear was completely legal under Alberta's laws, but that looks to be changing soon. Outrage over the couple's video has sparked moves to ban spear killing in the province.

"The type of archaic hunting seen in the recently posted video … is unacceptable," Alberta's Ministry of Environment and Parks announced earlier this week. "We will introduce a ban on spear hunting this fall."

This should be banned across

This should be banned across Canada, and I'm sure these cretins would not be allowed to bait and kill wild creatures in OOhio. Stay safe, keep out of Canada.

I wonder what else they

I wonder what else they killed while out there, since it is proven that being allowed to kill predators increases poaching. If we don't demand an end to baiting, etc, the province will only do the minimum and ban spears. They are pro-hunting and have allowed it in areas of The Castle, etc. Not to mention the wolf/coyote genocide.

There' got to be a way to

There' got to be a way to make sure these two persons do not get to cross back into Canada ever again. We have absolutely no use for persons with that [lack of] class

There is no excuse for this

There is no excuse for this type of hunting, what is sad is that these two have no compassion what so ever for the bear they savagely killed. People with their mentality will always have excuses. The happiness, and laughter and big smile on this mans face on the video just shows you what type of moron this man is. Stay out of Canada we do not want you here! It is sad that it took this to put a ban on spear hunting in Alberta. This type of hunting should be banned in all of Canada period!
I also think the the outfitters that made this trip possible and who more than likely put up the bait trap should be taken blame for this.

Why are they baiting the bear

Why are they baiting the bear in the first place? This is hardly a sporting practice and needs to be outlawed. Killing a bear after baiting it is like shooting fish in a barrel - definitely NOT something to be proud of.

These people clearly lack compassion and put their own thrill seeking ahead of another creature's suffering. Shame on them.