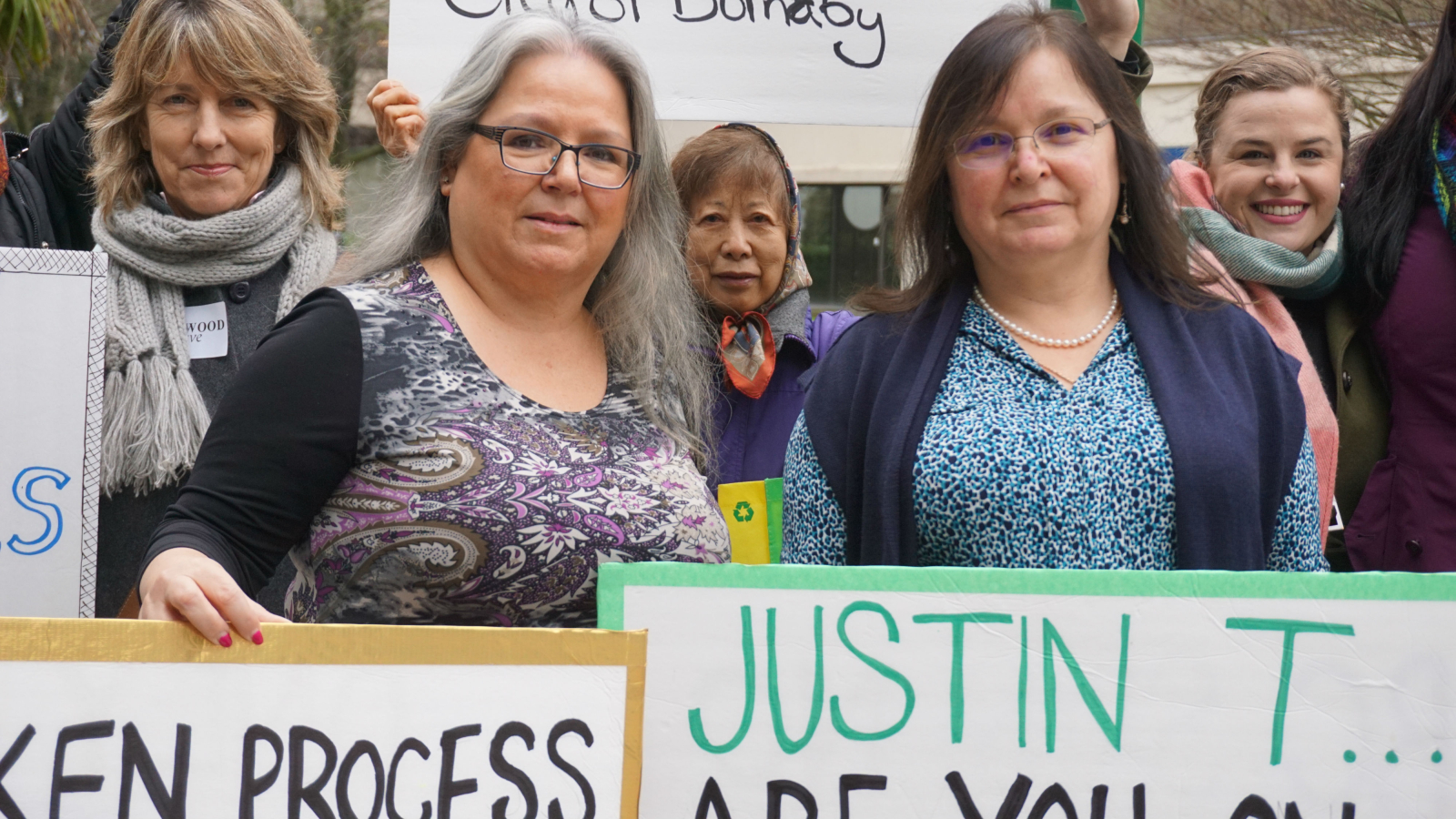 First Nations chiefs across Canada haven't discussed the details of the plan yet, but they aren't ruling anything out if the Trudeau government approves the construction of a major pipeline project that crosses their territory without their consent. Several are still waiting on the results of court cases before they make their move, and others are already preparing for the worst.

“You may see hordes descending upon Parliament Hill," said Chief Susan Miller, of the Katzie First Nation in B.C. "We have had some discussion around what civil action would look like, and I think the more we work together, that’s what brings out the hordes. It’s an impressive sight, to see thousands of people coming out for a common cause.”

Last year, Liberal leader Justin Trudeau campaigned on a promise to renew nation-to-nation relations with Indigenous communities, and has repeatedly told Canadians since then that "governments grant permits, communities grant permission." And after the historic signing of a pan-continental Treaty Alliance Against Tar Sands Expansion, Indigenous leaders have renewed their resolve to hold him to those promises with all resources available to them.

“In that crowd, you’re not just going to see First Nations people, you’re going to see your neighbour next door who doesn’t support this either," Chief Miller, whose community is fighting Kinder Morgan's Trans Mountain expansion pipeline, told National Observer.

"We’re just the vessel to push that all through, and I think when the numbers speak like that, the government can’t continue to disregard [us].”

Youth action in Ottawa in October

Nearly 90 Indigenous leaders in Canada and the U.S. have already signed the Treaty Alliance, which aims not only to protect their territories from pipeline, tanker, and rail projects, but to move society towards cleaner, leaner, living as well. Major proposals they take issue with include Kinder Morgan's Trans Mountain expansion (from Alberta to B.C.), TransCanada's Energy East pipeline (from Alberta to New Brunswick), and Enbridge Northern Gateway (from Alberta to B.C.)

But the presence of non-Indigenous allies, including a number of environmental organizations, at its signing ceremonies in Montreal and Vancouver, add weight to Chief Miller's claim: Indigenous activists in North America are not alone.

“We strive to act in solidarity with Indigenous folks," said Gabriel D'Astous, a recent graduate of the University of British Columbia and pipeline protest organizer for Climate 101. "They’ve been on the front lines and blocking tar sands projects that threaten the earth and water, and have been defending their rights and lands for years and decades now."

D'Astous and his team are organizing a youth rally in Ottawa on Oct. 24 to urge the Trudeau government to reject the Kinder Morgan Trans Mountain expansion, which has been opposed by at least 21 municipalities and 17 First Nations in Western Canada. He said he, and many of the other protesters, are willing to be arrested in what he hopes will be the largest youth civil disobedience action of its kind in Canada.

While First Nations, environmentalists and other key stakeholders across North America argue that oilsands expansion increases the risk of catastrophic oil spills, threatens critical marine and terrestrial ecosystems, and pushes international climate targets out of reach, energy companies argue that they will revitalize struggling Canadian economies by bringing energy to overseas markets. Industry also argues that they are using state-of-the-art technology that promotes responsible development of resources such as the vast oilsands deposits in Alberta - considered to be the world's third largest reserve of crude oil after Saudi Arabia and Venezuela.

All of the major pipeline companies say they are also trying to work collaboratively with First Nations. For example, Kinder Morgan says it has signed more than 20 "mutual benefit agreements" with Indigenous communities along the route of its Trans Mountain corridor. These would be confidential agreements that could include education and training for pipeline construction jobs as well as improvements to community services, infrastructure and other benefits.

Greenpeace — one of the loudest environmental organizations speaking out against pipelines — doesn't buy industry's logic. Since the start of the year, it has trained 800 protesters across Canada with new skills in non-violent action, civil disobedience, and media communications during 40 training sessions conducted in B.C., Alberta, Ontario, Nunavut, and Quebec.

Calls requesting the training sessions peaked after the National Energy Board (NEB) conditionally recommended the Trans Mountain expansion in May, said trainer and organizer Earyn Wheatley, and have been steady since the conflict of interest scandal involving former Quebec premier Jean Charest, TransCanada's Energy East pipeline, and the NEB was brought to light over the summer.

“I think there could be unprecedented mobilization and action in opposition to these pipelines if the projects go forward in the way that they have been," the Greenpeace staffer explained. “That’s definitely a core interest of people who are coming to participate in these trainings — they’re very concerned about those pipelines, and many are saying that the NEB process has been very problematic.”

The organization plans to hold 15 more protest training sessions before the end of the year, with those in Quebec targeting Energy East, and those in B.C. targeting the Trans Mountain expansion, which is due for a decision from the federal government on Dec. 19. Teagan Stacey, a graduate of these trainings, has even started her own non-violent 'kayaktivist' group called the BC Seawolves, which will stand in solidarity against Trans Mountain with Greenpeace and First Nations.

“We’re showing the government that we’re not going to let this go through, and if they think they can push it through where members of this oppose it, we’re going to make sure it’s stopped," she told National Observer. “We recognize this has huge implications for the rest of our country, and the rest of the world through tar sands expansion. All of that we bring with us out in the water.”

While not all Indigenous nations in Canada are opposed to oilsands expansions, and some have signed on in support of pipelines crossing their territories, those who oppose the energy projects are happy to have allies across the country. They're also happy to serve as allies to others, said Tsleil-Waututh First Nation spokesperson Rueben George, who recently visited the Standing Rock Sioux fighting the Dakota access pipeline in North Dakota.

He said their movement, which has recently prompted a halt in construction of the controversial pipeline, has been guided by their elders, cultural, and spiritual values, and the movement in Canada will be too.

"I know [our] elders, community and leadership have been doing the same thing,” he told National Observer. “Campaign promises were made to boost not only the health of First Nations and nation-to-nation negotiation, but economics as well. Doors are opening for that. I’m excited about that.”

Chief Terry Teegee of the Carrier Sekani Tribal Council in Prince George, B.C., who met George at the Treaty Alliance signing in Vancouver on Thursday, said he too, is excited about the shifting relationship between First Nations, governments, and the rest of Canada. What's happening in North Dakota at the Standing Rock Sioux camp will most certainly be replicated across the provinces, he explained, "if it comes to that."

“I think [pipeline approval] will be for I believe, many First Nations, a tipping point of our relations with government and corporations where we’ll have to stand up for what we feel is right, and protect our rights and title, and Mother Earth," he said at the signing. "We very much appreciate the outside help. It feels great knowing we have allies out there.”

Editor's note: This story was corrected at 3:22 p.m. on Sept. 27. A previous version read that Climate 101 would be protesting on Parliament Hill. It will in fact, be protesting in Ottawa, but the location has not yet been disclosed.