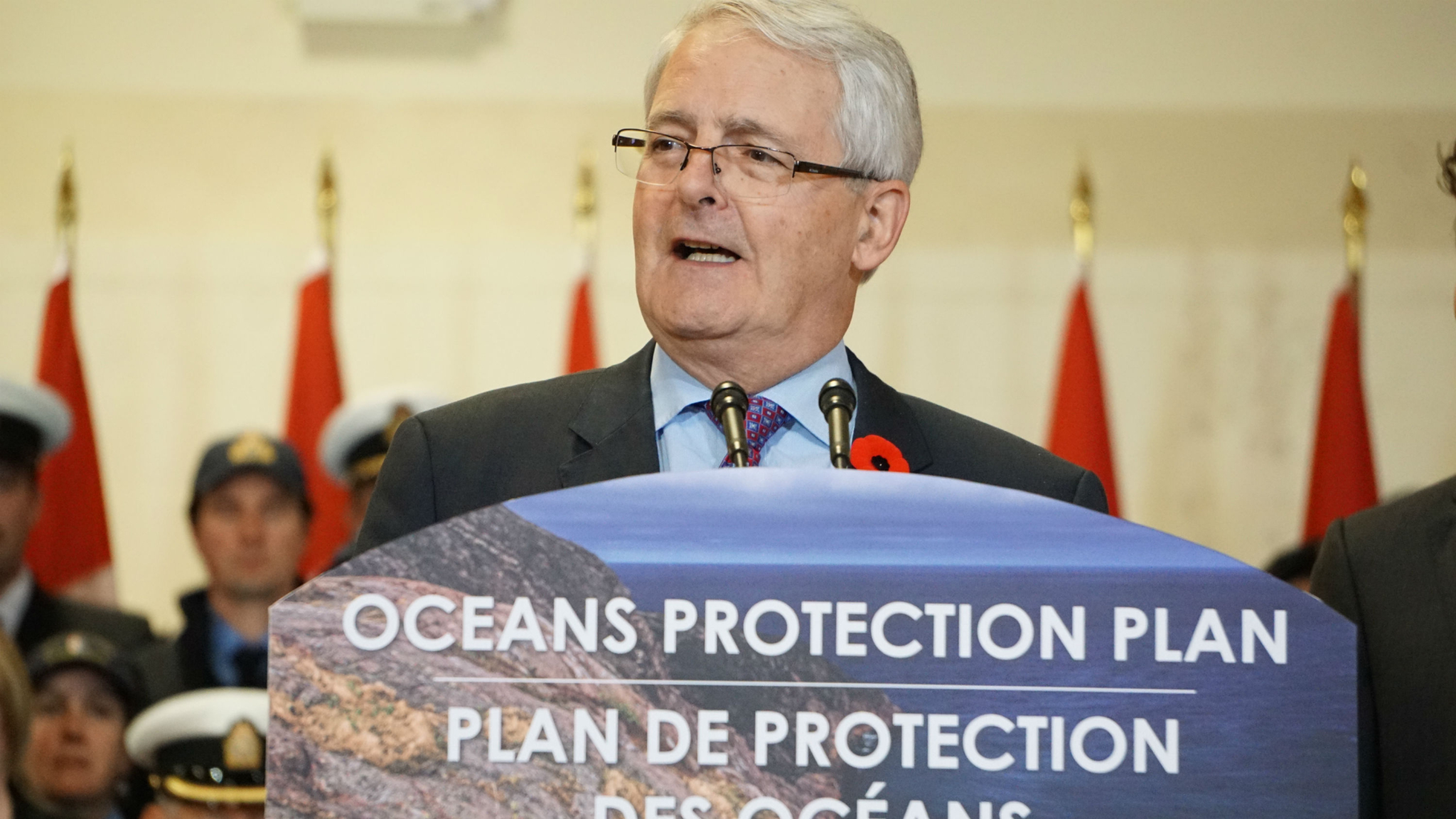 And as thousands of environmentalists, First Nations, and oilsands expansion opponents reel over the announcements, Garneau said these Liberal numbers show that Canada can build new pipelines, meet greenhouse gas reduction targets and honour its commitments in the COP21 Paris agreement all at once. Many of those who disagree, he suggested, may not have considered all of the new measures the federal government has put in place to make the country cleaner and greener.

"They’re missing the fact that Alberta and Premier Notley has made her plan with respect to carbon such that she will not allow Alberta to produce more than 100 megatons per year of greenhouse gases," he said in Vancouver, B.C. "We have factored that into the (carbon) budget that we have to (achieve) by 2030 and we know from that point of view that we can meet the numbers. I’m an engineer, I really believe in numbers."

Garneau, Canada's first man in space, was in Vancouver after Prime Minister Justin Trudeau approved the controversial Kinder Morgan Trans Mountain expansion (TMX) and Enbridge's Line 3 pipeline project in Ottawa on Tuesday. At the same time, Natural Resources Minister Jim Carr spoke with a business audience at the Calgary Chamber of Commerce, in what The Canadian Press was calling a "pipeline sales mission."

And while Alberta and Saskatchewan may be celebrating the recent oilsands expansion announcement, many British Columbians are not. The TMX expansion would triple the capacity of an existing pipeline system that transports crude oil from Alberta to the west coast, send local oil tanker traffic skyrocketing by 600 per cent, and expose vulnerable salmon and orca populations to the risks of a catastrophic oil spill.

While supporters of the $6.8-billion, 980-kilometre addition believe the project will open up access to new overseas markets and revitalize struggling local economies, its detractors believe that the millions of tonnes of annual heat-trapping carbon pollution from the oil in the pipeline would kick climate targets to the curb.

"We’ve put a price on carbon, we’ve signed and ratified the Paris accord, and we will reduce greenhouse gases by 30 per cent below 2005 levels by 2030," he said. "We will do the additional work that’s necessary so we can meet our 2030 objectives."

Premiers from across Canada will gather in Ottawa on Dec. 8 and 9 to create a pan-Canadian strategy to deal with climate change and confirm the steps required to implement it. The federal government has also recently committed it will accelerate the phase out coal-fired electricity (netting 15 million tonnes of emissions reductions), along with proposing a low-carbon fuel standard. In addition, it posted new regulations for hydrofluorocarbons — another powerful GHG — that should eight million tonnes of CO2 equivalent yearly by 2030.

Garneau also said the federal government is delivering on its promise to take environmental protection seriously, through the development of a world-class National Oceans Protection Plan with robust oil spill response measures, and a legislated crude oil tanker ban for B.C.'s north coast.

Legislation for the tanker ban will be on the table by springtime, he added, and will include all persistent oils, like diluted bitumen. It will not include refined products like liquified natural gas (LNG), gasoline, jet fuel, or propane, which are not considered "persistent" chemicals.

"If (persistent oils) make their way into the water they don’t break up or evaporate," he explained. "They tend to stay a long time, some of it sinks, and it causes environmental problems that we consider to be unacceptable."

The ban will include all the water, ports, and harbours between the northern tip of Vancouver Island and Alaska — a pristine coastal ecosystem known as the Great Bear Rainforest. The area had previously been threatened by the controversial Enbridge Northern Gateway pipeline proposal, which aimed to send roughly 200 oil tankers a year through the Great Bear Sea.

The Trudeau government rejected this project formally on Tuesday, and while there are no crude oil tankers currently sailing through the area or projects on the horizon that would bring them there, Garneau insisted that the ban is still relevant.

"It’s there so that it’s going to apply from here on in," he explained. "It means nobody will be able to bring in, let’s say through a pipeline route to the coast, any product that would classify as a crude oil."

"They’re missing the fact that Alberta and Premier Notley has made her plan with respect to carbon such that she will not allow Alberta to produce more than 100 megatons per year of greenhouse gases,"

They're missing the fact that Bill 25: The Oil Sands Emissions Limit Act is rich with exemptions and allowances, including co-generation, upgrading, experimental schemes, primary production and synthetic crude. The Act is so far from being complete or comprehensive, it is amazing it was brought before the legislature. There should be no illusion that this Bill was rushed to "part the clouds" for the Kinder Morgan approval, and to create subsequent talking points for Carr, scripted praise for Notley and endless industry and mainstream media propaganda.

The second portion of Bill 25 leaves the window wide open for the Lieutenant Governor in Council to make, change, prescribe, define or establish any, or all portions of the Act. A loophole so big, millions of barrels a day of bitumen can flow through it.

Oil sands emissions will not be reduced, limited, capped or otherwise encumbered.

For those that want to read the Act, all 7 pages of it is here:

We watched this climate movie

We watched this climate movie for years already with Harper. This time it is Trudeau saying "trust us we have a climate plan". And just like Harper he won't tell us what it is! We know they have done the CO2 projections through 2030. In fact Garneau claims they have them in this article and all is rosy and good. Just like a parade of Harper ministers did. So where are the numbers Mr. Trudeau? Why are you keeping Canadians in the dark?!

"If (persistent oils) make their way into the water they don’t break up or evaporate," he explained. "They tend to stay a long time, some of it sinks, and it causes environmental problems that we consider to be unacceptable." Says Garneau in the article. Yet approving TransMountain and the 400% increase in tanker traffic to the very same coast - just further south - is a great idea. Bring forth the peer reviewed, independent scientific studies proving a southern spill would be any less harmful. Ditto the studies proving the 400% increase in tankers and ocean noise will have no detrimental impact on the critically endangered resident orcas, or the many other cetacean species. Better trot out the unmuzzled scientists involved as well, because experts need to be speaking to the public now. Name the spills that the "world class" cleanup processes we've been promised have been used on, with independent verification and studies on their long-term health. What international scientific body decided the parameters of "world class" cleanup, how to go about it, remediate damage, verify it has been done properly, and certifies/regulates/oversees companies claiming to be qualified? Do they liaise with government environment regulators? discipline companies not up to standard? No? Perhaps this is exactly what we Do need, given thousands of spills never cleaned and the b.s. claims by industry. When the companies spilling are the same ones selling the chemicals to "clean it up" and they describe potential for spills as "bonanzas" for local employment, the system cannot be trusted.

The PM defends terrible decisions by claiming Canadians voted for his platforms (actually, despite millions "holding their noses" to strategically vote Liberal to oust the Cons, they still got less than 40% of the votes), but he has either broken, or ignored just about everything environment related. Even the areas of ocean being protected aren't getting permanent legal protection, just subsidiary protection government can easily cancel later. The proposed northern BC tanker ban doesn't stop any ships currently in use, it does nothing to stop spills like we've had recently, or far worse, in future. The ban is meant to look good on paper, while doing absolutely nothing to mitigate the danger.

China says they will talk trade deal if we have an ocean pipeline and hey presto, permission granted! TFW increase along with more immigration offices in China are no coincidence. The days of lucrative oil jobs for Canadians are over in favour of cheap migrant labour demanding citizenship, social programs and healthcare we already can't afford.

Does the Trudeau government's

Does the Trudeau government's approval to use Corexit make the math add up?