Canada is sharing info on asylum seekers with the Trump administration 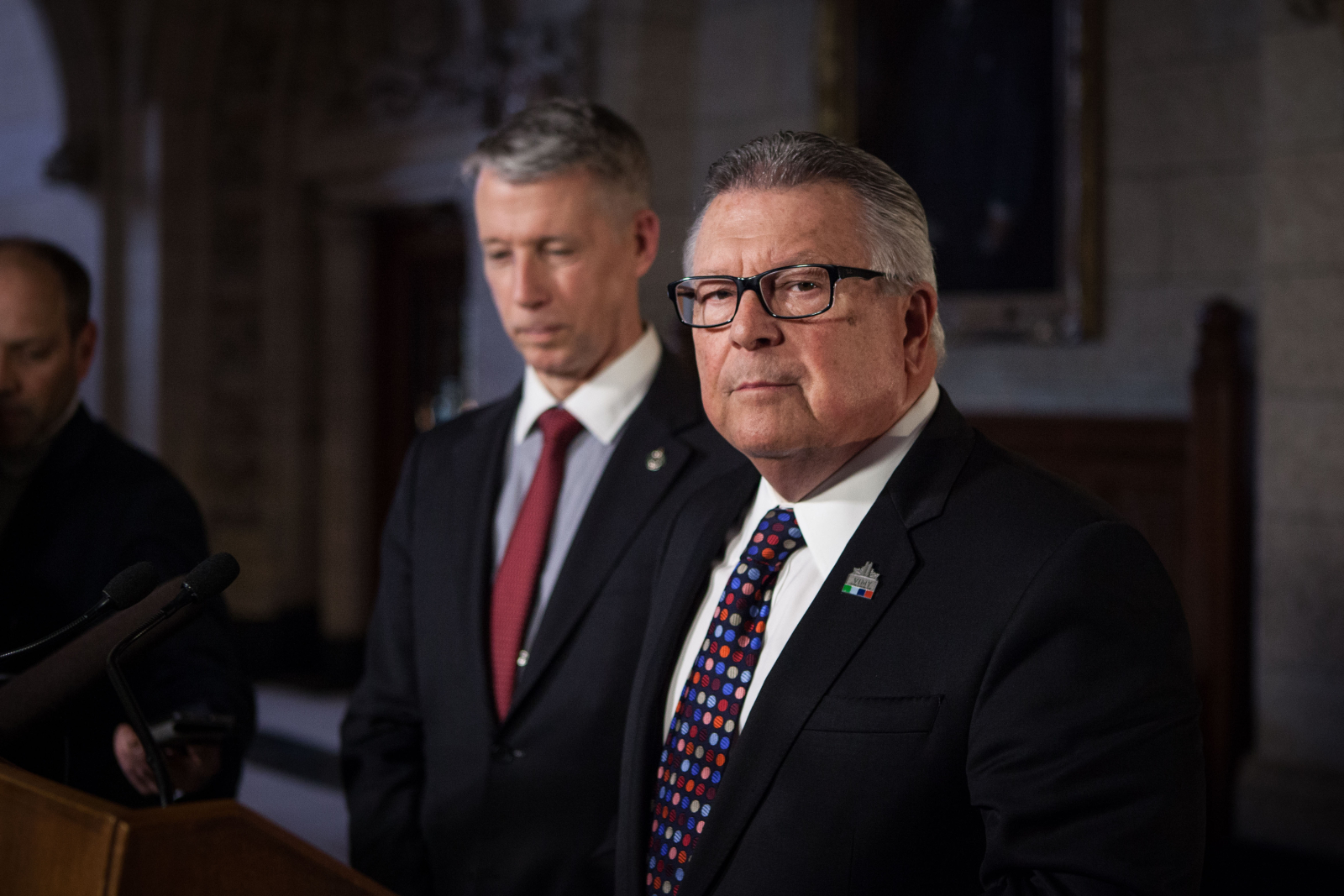 The Trudeau government is handing over information on people showing up at the border and claiming refugee status to U.S. President Donald Trump’s administration, Canada’s public safety minister confirmed Friday.

“We have provided information about the specific documents that were presented at the border because those are American documents,” Public Safety Minister Ralph Goodale told reporters on Parliament Hill.

The minister was speaking after meeting with U.S. Homeland Security Secretary John Kelly, a retired four-star Marine general appointed by U.S. President Donald Trump. Kelly was in town to talk with several Canadian ministers about immigration, refugees, border security and other topics.

Kelly is the first member of Trump's cabinet to visit Canada on official business since the president's inauguration in January.

The U.S. wants information identifying, to the extent possible, who the asylum seekers are, where they came from, what travel documents were in their possession and how they obtained them, said Goodale. "The vast majority," he said, are in the U.S. legally.

Canada and the U.S. have several information-sharing agreements. Goodale confirmed they “are in full force and effect,” although he did not specify which ones. “Are all governed by the appropriate legal frameworks and privacy frameworks,” he said. “We will follow the Canadian law and apply it meticulously.”

Kelly did not take questions from reporters, although he did pose for a group photo in the morning with his counterpart Goodale and other Trudeau government ministers and Parliamentary secretaries.

Lt.-Gen. (Ret'd) Andrew Leslie, the parliamentary secretary to the foreign affairs minister who helps stickhandle Canada-U.S. relations for the Trudeau government was at the photo op and also spoke with Goodale later in the day.

Leslie said in French that the meeting with Kelly lasted "about five or six hours" and addressed security, the international economy and counter-terrorism including ISIS. He called Kelly a "friend of Canada."

"How do you cope with this human migration?"

Government officials informed media last week about preparations underway for a possible surge of people entering Canada through the U.S. land border and requesting refugee status. Canada received 970 more asylum claims at the land border between Jan. 1 and Feb. 21 compared to the same period last year. Goodale assured Canadians this week that police and border security had told him resource levels were sufficient.

Thousands of people walk over the border each year at undeclared entry points, an act that’s both illegal and perilous. Some spots, like Hemmingford, Quebec, have become increasingly popular crossing spots. Law enforcement officials said last week that at least 435 people have made this trek so far this year.

Canada’s Safe Third Country Agreement with the U.S. means that people crossing into Canada from the U.S. at legal entry points aren't permitted to make an asylum claim at the border. But that law doesn't apply at places between the entry points, meaning that people who cross over at undeclared spots are treated differently.

If they are apprehended by the RCMP, said Goodale, they are given a health check, and then identified by biographic and biometric data, which is checked against Canadian “and international” criminal, terrorist and immigration databases. If flagged, the person is detained, but otherwise they are brought before an Immigration and Refugee Board hearing.

Goodale said Ottawa and Washington are gathering data on “the nature of this migration” and its causes. “We need to make sure we all know the facts and are operating on the same fact base,” he said.

“The work will then go forward in terms of how we can properly and appropriately manage the situation as it unfolds, and anticipate how it may unfold, because it’s been transpiring now for several weeks, but this is still relatively early in the process.”

But he was careful to note that with 400,000 people crossing the border daily, the “irregular” activity “is still a very tiny fraction of the total amount of human movement.”

"How do you cope with this human migration that you’re suddenly confronted with, and people are approaching the border and proposing to cross the border?" he said.

"No one is suggesting the construction of a wall along the Canadian border, no one is saying the RCMP should line up along the border and join arms and shoo people away. The fact of the matter is, the border is very carefully patrolled, but when people cross at some point in that 9,000 km, then there is a very precise legal procedure that clicks into place."

File a complaint if mistreated at the border: Goodale

Several Canadians have reported problems entering the U.S, such as Manpreet Kooner who said she was barred from entering the country after being fingerprinted, photographed and questioned.

Goodale acknowledged “a number of incidents in the last several weeks," and border issues occur constantly and in both directions. Canadians have no right to enter the United States, experts note, regardless of what passports or other documents they have.

​“Secretary Kelly and I agreed that his citizens coming to Canada, [and] my citizens going to the United States, have the right to expect a consistent, professional, respectful approach when they are being dealt with at the border. We want to ensure the very highest standards," he said.

He noted there were "recourse measures" available to people who wish to lodge a complaint about treatment at the border.

"I encourage everyone if they feel in some way aggrieved, to make sure they take advantage of that recourse process...if people don’t file a complaint, then there’s no way to know for sure how many of these incidents are taking place."

It is a gratifying but

It is a gratifying but equally surprising to hear that the US administration would like to understand why people are leaving the US, even though they are legally present in the US.

The US regularly reminds everybody that nobody has the right to enter the United States. Unless you are a citizen of the country you are entering, filing a complaint when racism or other bigotry is experienced at the border, is a waste of effort and possibly dangerous.

President Trump recently demonstrated that nobody has the right to enter the US, even when they have been granted permission in writing to do so, by the Government of the United States. Since entering the US is not a legal right, even when permission is in hand, why would there be any reason to believe that being IN the United States with such permission, is any assurance against being deported without notice?

Although the court stayed the order, the administration made its wishes and attitude clear. It encouraged American immigration officers to do what they have always had the right to do, which is to bar entry. US Immigration officers have no obligation to justify a barring of entry, whether racially or religiously based, or because the officer was just having a bad day. Just try arguing with a US Immigration officer about that one.

I cannot possibly believe that the current US administration has any wonder whatsoever as to why people legally present in the US, would want asylum in Canada.

On the other hand, it would probably surprise the current administration to know WHO wants to leave the US.

We just returned from a vacation in Florida, where we met a really nice American-born comfortably-retired white couple. They wanted to know more about Canada because they are strongly considering leaving the US, solely due to the discomfort and uncertainty created by President Trump and his administration.

As far as I can see, everybody in America is extremely uncomfortable now -- it is only a matter of degree from person to person. The discomfort spreads among all Americans and among all people living in the US -- legally or not. Even those who voted for Trump, are wondering what is going on.

As the expression goes, be careful what one wishes for! America's best and brightest are actively opposing Trump, and many have already left or are considering leaving the country. Welcome to Canada!