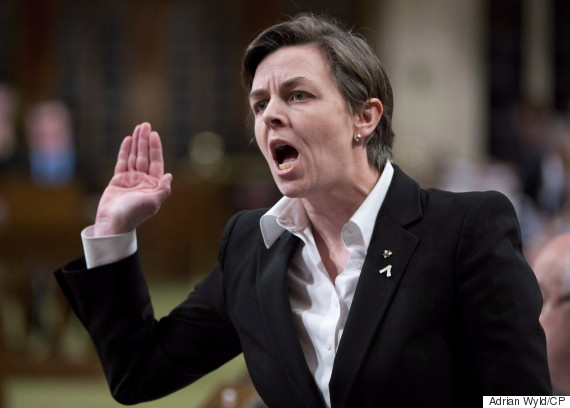 Conservative MP and leadership candidate Kellie Leitch in the House of Commons on December 4, 2014. File photo by the Canadian Press
Previous story

Leitch, who served in former prime minister Stephen Harper's Cabinet, blamed the Trudeau government for an increase in detained asylum seekers, in an email and Facebook post to her supporters on April 6.

She said she had expected that Ottawa's decision to lift visa requirements for Mexicans in December 2016 would lead to an "increase in bogus refugee claims."

Under the Harper government, Canada imposed visa requirements on travelers from Mexico, that the government said at the time was to reduce refugee claims from Mexican citizens in Canada.

"We knew it would happen.

When the Trudeau Liberals lifted the visa requirement on visitors from Mexico, we knew it would lead to an increase in bogus refugee claims. And it has.

This poorly thought out policy — designed to make Justin Trudeau look good, rather than do the right thing — is costing us more.

Leitch goes on to say that the Liberal government approved $12 million in additional funding to deal with "bogus Mexican refugee claims" and that it would cost hundreds of millions over the next 10 years, "with no benefit for Canadians."

Leitch argued the Harper-era tighter travel requirements for Mexican citizens had "no negative impact" on tourism in Canada. Asylum seekers in Canada have been on the rise in recent months. Hundreds of asylum seekers have crossed the U.S.-Canada border illegally seeking asylum in 2017, while others travel to Canada as visitors and later apply for asylum at government offices.

Some have blamed this increase in activity on U.S. President Donald Trump's attempt to impose restrictions on the entry of people from certain countries to the United States. The Canadian government said last month it was too soon to tell if it was a trend.

In response to Leitch's criticism, Public Safety Minister Ralph Goodale's spokesman Scott Bardsley said Leitch is "out of touch with reality" on her tourism claim.

"According to the Tourism Industry Association of Canada, the number of Mexicans visiting Canada plummeted by 50 per cent after its implementation," wrote Bardsley in an emailed response.

He said by the tourism associations' estimate, Canada lost out on $465 million from Mexican tourists during the years 2009-2014 as a result of the visa requirement.

Bardsley wrote that while Mexican visitors no longer need visas, they now require an Electronic Travel Authorization (eTA) to fly to or transit through Canada, which he said maintained robust border controls. But he didn't dispute Leitch's message that a much larger number of Mexicans were claiming asylum in Canada since the Trudeau government lifted its visa requirement for Mexico.

Leitch's proposal to reinstate the Mexican visa requirement was met mostly with support on Facebook, though some said they have nothing against Mexicans and would prefer that Canada shut out Muslim refugees instead.

Leitch sparked controversy over her leadership campaign platform plank to screen visitors and immigrants to Canada for 'Canadian values', such as whether they believe women are equal to men.

Critics have pointed to potential problems with Leitch's proposal to screen for values such as gender equality. In April 2016, Leitch and 90 Conservative MPs opted not to back an NDP motion on addressing the gender wage gap in Canada.

This is one dangerous person

This is one dangerous person ranting here. I sure hope the Conservatives realize just how far backwards Canada will become if Kelly Leitch becomes their leader. VERY SCARY
We do not need a "Trumpf Wannabe" anywheres near the controls of our Government.

Stephen Harper and Donald Trump in a skirt and blouse. I work with a Syrian refugee and she is so nice, friendly, kind. Her English needs to be worked on, but she's only been in Canada for 5 months. I know that she doesn't possess most of Leitch's "Canadian values", but she is a kind, friendly person, and she does not deserve Leitch's ugly, mean, unfair, derisive comments. Grow up Kellie, you need to be a responsible member of Canada's Parliament.

À propos. A witch on a

À propos. A witch on a witch hunt.

Canadian values do exist, but don't screen immigrants for them: Bernier